Most of us never think about how the human brain works—until something goes terribly wrong. A person may lose sight or hearing, experience cognitive decline due to disease or aging, or suffer paralysis or damage due to an accident or some other type of trauma. Unfortunately, when impairment occurs, it often is irreversible.

For centuries, scientists have pondered how they could fix a broken brain. Now, the idea of implanting microchips inside the human head is becoming real. Sitting at the intersection of neuroscience, engineering, and computing, neural implants could restore functionality for people who have suffered degenerative diseases, accidents, vision or hearing loss, and more.

"Brain-computer interfaces are advancing at a remarkable rate. They promise to change medicine and other fields," says Florian Solzbacher, director of the Center for Engineering Innovation at the University of Utah and chairman of Blackrock Neurotech, a firm developing implantable chips. "We are now reaching an inflection point."

"We are witnessing significant, simultaneous advances across many areas of science, engineering, and medicine—the results are transforming our notions of brain-computer interfaces," observes John Rogers, a professor of material science at Northwestern University.

Mind control and superhuman powers are not the stuff of today's brain implants—even if science fiction novels and films like Brainstorm, Neuromancer, and Johnny Mnemonic are etched into the popular psyche. So far, 34 people around the world have an implanted computer interface.a These systems are designed to restore lost sight, hearing, or physical or mental functionality. 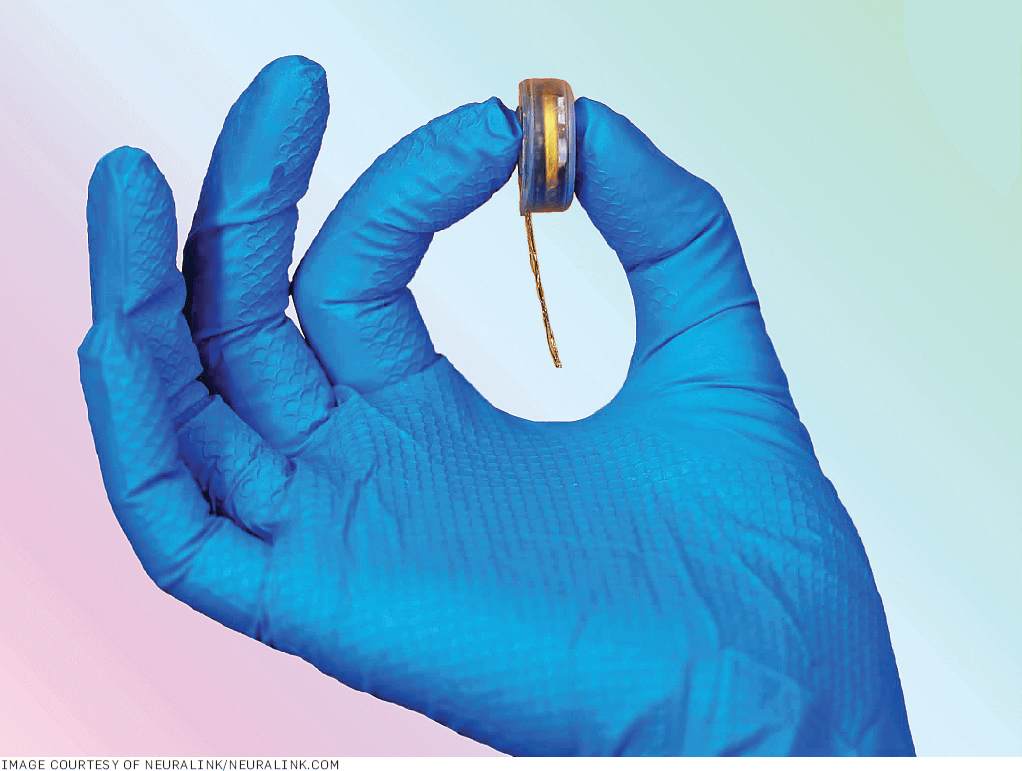 Figure. A neural implant and electrode array prior to implantation.

For example, in Stanford University's BrainGate program, paraplegics and stroke patients can operate a computer mouse using experimental BCIs. As a person thinks and fires neurons, a chip translates the signal into actual movement within a computer or on a prosthetic limb. This, among other things, allows someone with ALS (amyotrophic lateral sclerosis, a neuro-degenerative disease that affects nerve cells in the brain and spinal cord) or a brainstem injury to speak by controlling a cursor and virtual keyboard on a computer screen.b The technology currently converts thoughts to text at a rate of about 90 characters per minute.

Several companies are also introducing BCI interfaces. For example, Blackrock Neurotech, which hopes to receive FDA approval for some of its devices by the end of this year, is focused on restoring movement, speech, and sensations related to specific areas of the brain. One of the firm's neural implants has helped a person who had been partially paralyzed by a stroke regain use of his left arm through the use of a BCI implant and a motorized exo-skeleton.c "We are steadily overcoming the technical and practical hurdles," Solzbacher says.

Another firm, Paradromics, has developed a brain-computer interface that's designed to restore movement and hearing. Still another upstart, Science Corp. has its eye on retina implants that transmit signals to the visual cortex of the brain. The technology could restore vision among the blind, but could also serve to augment imagery for those with normal vision. "The future isn't better smartphones or AR glasses: it's making the sensorium itself directly programmable, and maybe even adding new senses entirely," biomedical engineer and CEO Max Hodak wrote in a blog post.d

Then there is Elon Musk's company, Neuralink. Its neural implant allowed a macaque monkey named Pager to play Pong using only its thoughts.e Researchers implanted a neural recording and data transmission device with 1,024 electrodes, called N1 Link, in both the left and right motor cortex of the monkey's brain. After decoding the brain signals and pinpointing the specific neurons that respond to motion, they equipped the monkey with a functioning BCI that measured the speed of upcoming or intended movements.

Just as a baseball player does not have to understand trigonometry to catch a fly ball, neural engineers don't need an exact understanding of the brain to stimulate the right responses. Solzbacher says researchers have learned to decode signals and match them with the density of electrodes required to transmit the right information and elicit the desired response. These gains revolve heavily around advances in deep learning, machine learning, and other types of AI.

Neural implants sit just beneath the surface of the skull—barely touching the surface of the brain. For example, the Paradromics 1.5-centimeter square chip—roughly the size of a baby aspirin—uses 1,600 platinum-iridium microwires that penetrate only 1.5 millimeters deep into the neocortex.f It and other wireless implants use NFC technology to communicate with computers and other electronics. Essentially, the implantable device serves as a translator between specific nerve cells in the brain and the electrical signals traveling to and from devices, including conventional computers, biomechanical limbs, and various types of prosthetics.

"The future isn't better smartphones or AR glasses; it's making the sensorium itself directly programmable, and maybe even adding new senses entirely."

Despite remarkable advancements in the field, dealing with the physical and physiological constraints imposed by the human cranium is a daunting task, Hodak says. "There's no free space in the brain. If you attempt to place anything inside the brain, no matter how small or flexible it is, you're going to cause bleeding and damage. In some cases, this isn't a problem and it's easy to clinically justify, but it will at least limit scaling and upgradability."

To be sure, neural implants must be biocompatible and somewhat flexible, yet resistant to moving around and causing damage to the brain. They must avoid corrosion in the salty fluids of the brain and remain biocompatible for years—or perhaps, even a human lifes-pan. However, "Biocompatible high-performance electronic systems that can operate in a safe, stable fashion over long periods of time while immersed in cerebrospinal fluid are extremely difficult to build," Rogers explains.

The engineering obstacles do not stop there. Rogers, a pioneer in the field of brain-computer interfaces and flexible electronics, says there are also issues related to transistor size, the shapes of chips, and the ability to transmit the required data through a wireless interface. Engineers typically rely on metals, carbon nanotubes, and conductive polymers that function for years. For example, Blackrock Neurotech's devices, which come in different shapes and forms, are built from materials such as glass, ceramic, liquid-crystal polymer (LCP), silicon, and epoxy adhesives.g

Not surprisingly, some problems are easier to solve than others through neural implants. For instance, hearing and vision are based on very specific, narrow sets of neurons that are well understood by scientists. In contrast, conditions such as dementia, addiction, and depression are far more nebulous. Whether scientists can produce chips that tackle these broader conditions remains unknown, as "they require a much more sophisticated understanding of the brain and far more advanced engineering," Hodak says.

It should also come as no surprise that some envision brain implants as a way to gain an advantage, in everything from life hacks to business. For example, futurist, entrepreneur, and writer Zoltan Istvan, who ran for U.S. president in 2016 as a transhumanist candidate, had a chip implanted into his body about five years ago. The chip allows him to log into his computer and unlock the front door of his house without a key or password. Istvan says he would have no problem getting his brain chipped.

"The idea of putting Google searches and Google Maps directly in my brain is appealing. The ability to translate languages in real time without a device would be incredible," Istvan says. In fact, he takes a pragmatic and somewhat fatalistic view. "The technology is coming, it's going to be a trillion-dollar industry and regardless of what people believe, it's eventually going to extend beyond medicine and into the realm of everyday life." He believes people will seek out various capabilities via brain implant in much the same way they now approach cosmetic surgery to enhance their physical being.

To be certain, the ethics and morality surrounding brain-computer interfaces are not trivial. If chips that enhance cognitive function appear and people like Istvan receive them, questions arise about who exactly will have access to the technology and whether it could magnify existing socio-economic divisions. Fears about authoritarian governments or others using neural implants to control the thoughts and actions of citizens also exist. While total mind control remains far-fetched, Rogers says recent experiments with animals confirm that it is possible to pair and unpair animal groups by modulating their brain activity using cellular-scale light-emitting diodes (LEDs) and certain types of genetic modifications to the neurons themselves.h

It is not difficult to imagine a government or brain hacker might wish to control individuals' basic impulses.

Such capabilities could be both beneficial and detrimental. On the one hand, it might be possible to re-program a person's brain at least partially after a stroke or the onset of dementia. On the other hand, it is not difficult to imagine a government or brain hacker might wish to control individuals' basic impulses. In one experiment, researchers reprogrammed a patient's brain to love the music of Johnny Cash while the neural device was on, but as soon as the neural implant was shut off, the individual suddenly had no interest in the music.i

In the end, Rogers believes there are limits to what neural implant technology can achieve. "Severe neurode-generation involves the permanent loss of critical networks of neurons. So, the question becomes: is it possible to substitute man-made electronics to fill in or bridge those gaps? It's an additional level of challenge for which there is no clear path, partly because our understanding of brain function remains incomplete. … It may take many more years to gain an advanced level of understanding about how to optimally combine technology and the human brain."

Indeed, there are no obvious answers and there is no clear path forward. Like all science and technology, neural implants will deliver enormous benefits for some, but also amplify risks for misuse and abuse.

Nevertheless, Solzbacher remains optimistic: "Within 10 or 15 years, we could alleviate the problems associated with numerous neurological disorders—and we might replace many drugs that have significant sid -effects. The technology could have a profound effect on people's quality of life."

Why You Haven't Heard about the Secret Cyberwar in Ukraine