How Did the Romans Calculate?

Today we use a place value system and Indo-Arabic numerals (0 to 9) for calculations. The Romans utilized number symbols like I, V, X, L, C, D, M. They had no sign for zero and no negative numbers. Therefore there is no year 0.

Experts are still wondering how the Romans calculated with their number system. No document is known that describes its handling. Dealing with their numerals is considered difficult. However, it is unbelievable that the Roman engineers constructed great buildings and that the merchants did a lot of trading without being able to calculate.

The most natural tool for counting and calculating are the fingers. The hands can be used to represent large numbers. For arithmetic, among other things, shells and pebbles were used. There were different types of counting boards and bead frames. The chronological development goes from the Babylonian abacus to Greek and Roman calculating boards. This was followed by the Chinese, Japanese and Russian abacus and finally the teaching abacus. Whether the Chinese took over the Roman bead frame or invented it independently is unclear. It is also uncertain whether the Japanese abacus derives from the Chinese.

The Romans had a portable "pocket calculator", the hand abacus (see Fig. 1–2). To the best of our knowledge, only three original copies have survived (Aosta, Paris, Rome). In addition, there are some drawings and several replicas (some from unknown manufacturers). Most of the devices were probably made of wood, therefore they did not survive. Moreover, there was apparently also a larger version, but there are no copies. 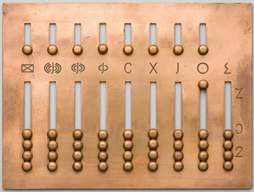 The Roman hand abacus has seven decimal columns. Below are the ones (I), tens (X), hundreds (C) etc. The upper beads each have five times the value. For the thousands, the character φ was originally used. The number M was introduced only in the Middle Ages. The slot marked with a circle is used for the ounces. Since 1 as (pound) has 12 ounces, this slot contains five single beads at the bottom and a six beads at the top. Thus 5+6=11 ounces can be represented. The right-most groove might have been used for ½, ¼, and ⅓ ounces. 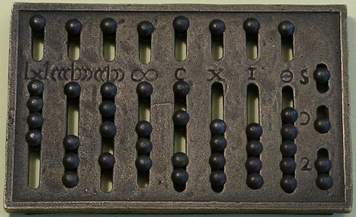 This replica corresponds to two drawings from the 17th century made in Augsburg and Rome. They are probably true to life, but the originals are lost. The reconstruction differs from the only three preserved original copies in that the ounce fractions in the right-most slot are represented differently. In this calculator the right column is divided into three parts.

In the basic position the beads are in the lower section (hell) below, in the upper section (heaven) above. A bead at the center bar has the value 1, 10, 100 (hell) etc. or 5, 50, 500 (heaven) etc. Detailed step-by-step instructions can be found in my book "Meilensteine der Rechentechnik" (Milestones in analog and digital computing).

The numbers are displayed on the Roman reckoner in a similar way to the Chinese and Japanese models (see Fig. 3). 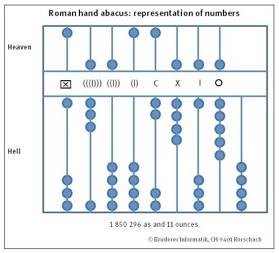 Fig. 3: Numerical notation.
The Romans did not have a symbol for the zero, but could represent the zero (= nothing) on the abacus.
The bead frame can also be used to represent the place value system.

It is generally assumed that the beads in the right-most column have the values ½ (top), ¼ (middle), and ⅓ (bottom) (see Fig. 4). If the right column is one-piece, the handling is a bit confusing, with three parts it is easier. 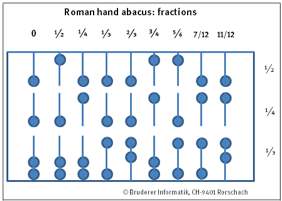 Fig. 4: Fractions on the Roman hand abacus.
In this drawing there are three separate slots.
These values can also be shown on a single groove. 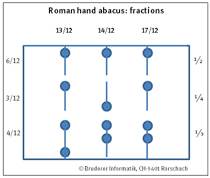 Fig. 5: Values that make little sense.
It is hardly true that the two lower beads each have the value .

If one assigns the value 1/12 to each of the two lowest beads, a seemingly meaningful solution results (see Fig. 6). Thus all fractions from 1/12 to 11/12 can be set without gaps. 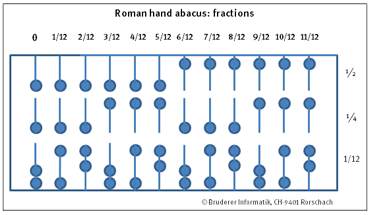 The lowest beads don't have the value of 1/12

For the ounce fractions (last slot) the ounce slot (penultimate slot) could have been repeated. Because with it all fractions from 1/12 to 11/12 could be (much easier) represented. It is therefore unlikely that the lowest beads have the value of 1/12. On the Roman hand abacus, fractions can be represented, but they are not compatible with the Roman numbering system.

The use of the last column remains a mystery

Alain Schärlig and Jérôme Gavin, both historians of mathematics, think that the solution presented in Wikipedia is wrong. It is uncertain what the characters next to the last slot stand for. In the Roman currency, by the way, there were only half ounces. Due to the devaluation of money, a twelfth ounce would have had only a very small value anyway.

How did the Romans calculate with their numeral system?

I believe that the Romans calculated with the abacus and only used the Roman numerals to record the results. The experience with the Chinese, Japanese and Russian abacus as well as the school counting frame shows that one can calculate very fast with these instruments. Addition and subtraction are simple, but multiplication and division are more demanding.

The Road to 6G

The U.S. Needs Its Own Chips