Women in STEM: No Simple Answers

More than half (57%) of scientists and engineers in Lithuania are women, according to data from 2017 (the most recent year available) from the European Union (EU). That percentage is far lower in other EU nations; in Germany, the analogous figure is just 33%. 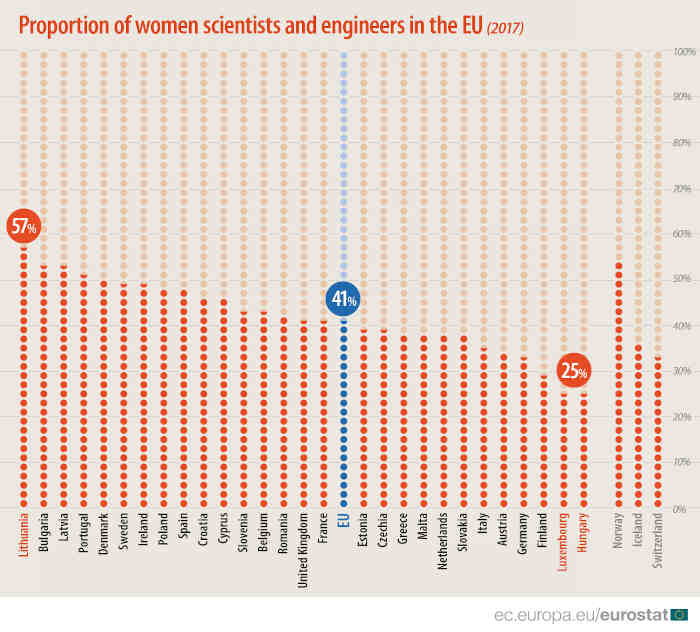 What accounts for such wide differences in women's participation in science, technology, engineering, and mathematics (STEM), and are there lessons to be learned from countries where that participation is high?

Unfortunately, such questions have no simple answers. Historical and cultural factors exert a profound influence on the numbers of women in STEM, and on the status they attain in those fields. In many countries, there is awareness of the need to increase women's participation in STEM, but how best to translate that awareness into effective action is not straightforward.

In Lithuania, a major reason for the large percentage of women scientists and engineers can be traced to its status as a former member of the Soviet bloc. With the fall of Communism, Lithuania became an independent nation, and in the ensuing transformation the pay and prestige of scientists and engineers diminished. As a result, "The number of women doctoral candidates started to go up," according to an article on LRT.lt, the website of Lithuanian National Radio and Television.

The LRT article reported that compared to other EU countries, Lithuania has a large proportion of jobs in scientific research that are part-time, or that depend on open-ended contracts. Lithuanian men have steered away from such jobs and toward more secure, better-paid positions.  Also, about a third of women in Lithuania have university degrees, while only about a quarter of men do.

The participation of women in STEM in Germany differs from that in Lithuania, although there are some similar patterns.  For example, 30 years ago in Germany, computer programming was not particularly prestigious or well-paying, so women accounted for a much larger proportion of programmers than they do today.

"In the 1980s, when the computer became a powerful and economically relevant instrument, the percentage of women dropped radically," said Erika Ábrahám, a computer science professor at RWTH Aachen University in Germany. She leads the Women in Informatics Research and Education Working Group within Informatics Europe (a European association of academic and industrial research institutes in the information and computer sciences).

A wealthy nation with a strong tradition of high-quality training for scientists and engineers, Germany is keenly aware of the need to increase the representation of women in STEM.  Several national programs are working toward this aim.  One prominent example is Komm, mach MINT (which translates to "Come, do MINT)"; MINT stands for mathematics, informatics, natural sciences, and technology, the equivalent of STEM), an initiative started in 2008 by the Federal Ministry for Education and Research to stimulate the interest of young women to enter scientific and technical degree courses.  Many STEM departments in German universities participate in the Schüleruniversität (student university), which brings pupils in secondary education to universities to learn about various areas of study.

Are these programs successful?  It's difficult to tell, Ábrahám said. The percentages of women entering STEM do not increase, or they increase only very slowly and seem to stagnate.  "We do not know, is this because these measures are not effective?" Ábrahám said.  "Or is this because of other factors, and if we did not have these measures, [the percentages] would even decrease?"

Some programs stem from political efforts, but "politics doesn't know how to effectively drive changes," said Ábrahám.  For example, German universities must now formulate plans for increasing their percentages of women faculty; if a university does not achieve those goals, its funding will be reduced. Such a political solution leaves a "bitter" taste, Ábrahám said. "The politics only brings regulations, which means additional work, which is done by women. Somehow, the mechanisms are not effective."

As in Lithuania, the history and culture of Germany influenced women's participation in STEM, and in the workplace more generally. As political trends have moved rightward in Germany and other countries in Europe, the pressure on women to focus on traditional roles of wife, mother, and homemaker has increased.

It is tempting to see data about women in STEM as the results of a race to get more women into STEM, showing which nations are winning and which are losing.  The reality is far more complex.  The real value of such data is to prompt a deeper analysis of the complexities the data reflect.

Allyn Jackson is a journalist specializing in science and mathematics, who is based in Germany.

The Race to Save the Internet from Quantum Hackers