The State of Wireless Charging

When Apple announced its next generation of smartphones and hardware products, fanboys got some pleasant news: iPhones can now charge wirelessly via magnetic induction. Just place an iPhone 8, iPhone 8 Plus, or iPhone X on a compatible charging mat and voila, your devices charge without the hassle of cords.

With the announcement, wireless charging moved one step closer to becoming a mainstream technology we use every day, and its potential use-cases are pretty important. Wireless charging has the potential to make using smartphones easier to use by eliminating wires and hassle. Done right, it also could take electric cars from upstart tech to standard vehicle of choice for most drivers.

Apple's announcement highlights just how far wireless charging needs to go before we embrace a future where devices and vehicles charge effortlessly as we move around.

Apple's wireless charging uses magnetic induction to power up devices. You place your iPhone or device on a pad, and energy is transferred "from one place (a charging mat) to another (your phone) through the magic of electromagnetic induction," according to Gizmodo. 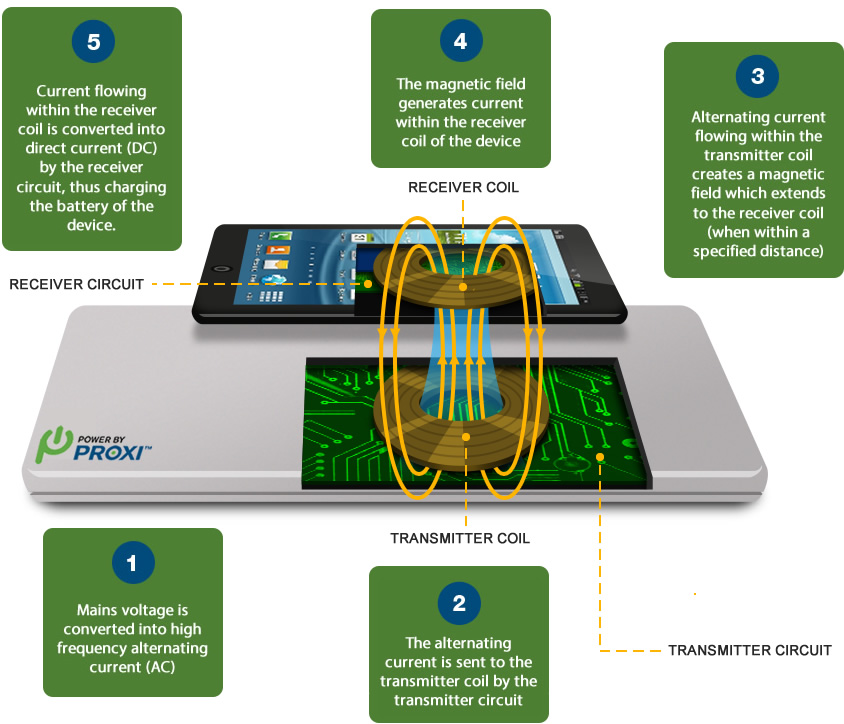 How it works.
Credit: powerbyproxi.com

If you have the right charging mat—and your phone is compatible with the mat—you don't need to hassle with wires or hunt down a charger. This process is easier than the alternative, but also has its drawbacks. You might need more than one mat, depending on the number of devices you need to charge. You also might find it difficult to use your phone while it lays flat on the mat.

That limits your mobility and the overall utility of wireless charging today. Nonetheless, electric car makers are taking a leaf out of Apple's book; BMW recently announced that it will bring charging pads to market for its electric cars in 2018.

"Once the BMW pad is connected to a 220V power outlet, all a driver needs to do is position their hybrid electric BMW over the charging pad, aided by visual positioning from BMW's iDrive system," reports Trusted Reviews. "From there the inductive pad to works its electrical magic, or more correctly works its physics, as it charges the vehicle's Lithium-ion battery by generating a magnetic field between the pad's electrical coil and another on the car's floor, allowing for 3.2kW of power to to be transferred to the car wirelessly."

Unfortunately, BMW's charging mat has the same drawbacks that phone charging mats do. The vehicle must remain in one place while it charges. The mat may be more convenient for electric vehicle owners, but it fails to substantially address the electric car market's biggest challenge: cars can travel only a limited distance on a single charge. Drivers are constrained by their distance from recharging stations—or from a house equipped with a charging mat.

There are a couple ways to solve this problem.

Smart roads are one potential solution. These systems, like one created by Qualcomm and profiled by Trusted Reviews, consist of charging pads embedded in roadways, so vehicles can recharge while on the move. A senior engineer at Qualcomm, however, told Trusted Reviews the system is 10 to 15 years away from potentially working on actual roads.

Another way to solve the charging mat dilemma for phones and cars would be to master true wireless charging, where electricity is broadcast through the air to a device or vehicle as it moves.

Recent developments could make this a reality.

In early 2017, researchers Sid Assawaworrarit, Xiaofang Yu, and Shanhui Fan published a paper in Nature that detailed a new technique for wireless charging that "builds on 'magnetic resonance coupling' in which electricity passes through an oscillating magnetic field created by a pair of transmitting and receiving coils," reports ZDNet.

Current magnetic resonance coupling requires the coils involved to be precisely positioned at fixed distances. The team's new technique, however, can broadcast electricity to a device about three feet away—while the device moves. Right now, researchers "have only demonstrated it working at a charge sufficient to keep a tiny LED lit, and the demonstration system is not a practical size," says ZDNet.

That means a wireless charger based on this technique could be years away from appearing in stores. The team needs to significantly improve how much power the technique generates.

LastPass, Password Manager with Millions of Users, Is Hacked