The creators of “fake news" Websites are making serious money from inventing stories that are not true, but which are so controversial that they generate thousands or even millions of hits on their sites’ Internet advertisements. Google and Facebook are among the worst offenders, allowing almost anyone to put cash-paying ads on their sites, although both are making a serious effort to weed fake news from their sites.

To plug the ever-increasing holes in the Internet's crumbling reputation as a news source, software tools are being crafted that can sort facts from lies as they propagate on the Internet. One of the best, called Hoaxy, was unveiled at ACM's 2016 International World Wide Web Conference.

Filippo Menczer, a professor of informatics and computer science and director of the Center for Complex Networks and Systems Research at the Indiana University School of Informatics and Computing, told Communications, "We do not know whether fake news can harm democracy, nor to what degree. There is plenty of anecdotal evidence that fake news and other digital misinformation can affect people's beliefs and manipulate their behaviors, and while fake news, conspiracy theories, hoaxes, and propaganda have always existed, we suspect that our reliance on social media to access news and information may make us more vulnerable to this type of manipulation than in the past."

According to Menczer, the liars always have a timing advantage, because even the best fact-checkers have to first find the lie, then research it, determine its lack of truth, then compose and post the evidence that disproves it. "There exists a characteristic lag of approximately 13 hours between the production of misinformation and that of accurate fact-checking," Menczer said.

How Bad is It?

Menczer's assistant, visiting Indiana State University Ph.D. student Chengcheng Shao, said, "The so-called fake news could mislead every aspect of our life: health (think of the bogus claim that a vaccine causes autism), politics (for example, the widely-held belief that President Obama is Muslim), and so on. During crisis events, uncontrolled rumors can distort facts, spread fears, or even cause chaos; think, for example, of the Boston Marathon bombing, or the case of Malaysia Air flight MH370. Just a few years ago, we saw evidence of so-called 'Twitter bombs' being used to smear electoral candidates, and in the latest election we saw a lot of inaccurate reporting about Hillary Clinton and Donald Trump; for example, at different points in time it was widely reported on social media that Pope Francis had endorsed either of them."

A 2011 ACM paper described a Web service, Truthy, that could address some of these issues by relying on network analysis techniques, according to Menczer and Shao. Another paper that same year described the TweetCred system, a browser plug-in that analyzes content-based features and metadata to determine tweets' credibility.

Hoaxy, the newest entrant to the field, has learned from the others and tries to supply what they lack: a deep interactive view of claims and facts in a graphically presented format that invites exploration and the acquisition of expertise in quickly making decisions between fact and folly.

"The main objective is to build a uniform and extensible platform to collect and track misinformation and fact-checking," said Menczer. "The Hoaxy system does not perform fact-checking itself, but instead focuses on tracking news shares from sources whose accuracy has already been determined independently."

Rumor-mongering itself is dominated by a few very active accounts that bear the brunt of the promotion and spreading of misinformation, whereas the propagation of fact-checking is a more distributed, grass-roots activity. Unsubstantiated rumors often spread like wildfire through Google and Facebook, when users cannot identify sources of the lies being promulgated; Hoaxy aims to make it easy to track down the sources of misinformation, no matter where they are encountered.

Said Menczer, ""Hoaxy's next generation, for instance, will have implemented a tracker for the Twitter API, and a set of crawlers for both fake news and fact-checking Websites, as well as a database," said Menczer. "Of course there are many, many more fake news sites than fact-checking sites, mainly just PolitiFact.com, FactCheck.org, OpenSecrets.org, TruthOrFiction.com, and HoaxSlayer.com. In the future we plan to study the active spreaders of fake news too, to see if they are social bots." 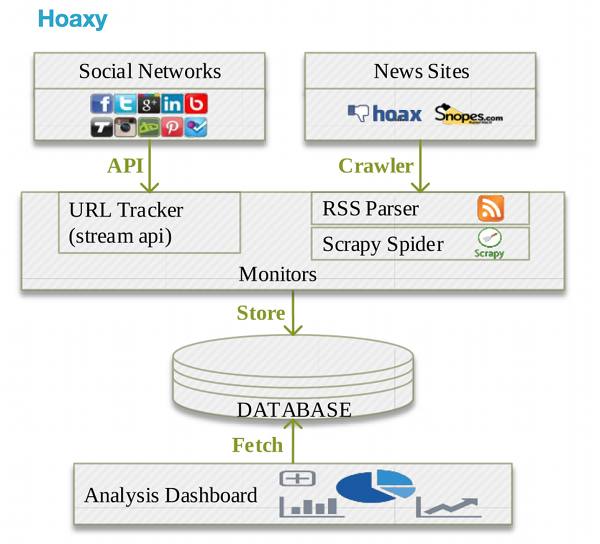 The basic architecture used by Hoaxy provides an easy-to-use basis
for making up one's own mind over whether news is fake.
SOURCE: Chengcheng Shao

Menczer also plans to expand Hoaxy's analysis to a larger set of news stories and to investigate how the lag between the distribution of misinformation and fact-checks on it varies for different types of news. He and his team have also compared their tool to others like FiB, which was created by college students in 36 hours during a hackathon.

Why asked why Hoaxy doesn’t just tell you if a news item is fake or not, Menczer said, "Hoaxy is a tool for collecting data and visualizing the spread of the claims made in the news and their related fact-checking. Users can use Hoaxy to observe how unverified stories and the fact-checking of those stories spread on public social media, but it does not determine the accuracy of any claim, and indeed we do not imply that all the claims shown are false.

“In fact, we suggest users to click on the links to fact-checking sites to see what these third-party organizations have found in their research. It’s up to the users to evaluate the evidence about a claim and its rebuttal. We think this may help people develop a more critical attitude towards social media news reports."

Manczer explained that Hoaxy and FiB have different goals. “FiB uses a collection of Web services (including image analysis, text analysis, web search, Twitter search, and Google Safe Browsing) to produce a 'trust' factor for a Facebook post, so it is a very interesting fact-checking aid, although no information is yet available about its accuracy.

“Hoaxy is not a fact-checking tool. Its goal is to visualize how unverified claims and fact-checks spread on social media. We have built it as part of our research on the technological, social, and cognitive factors that affect the virality of digital misinformation, including fake news, conspiracy theories, and hoaxes, and their competition with fact-checking efforts. We hope the tool will be useful to reporters and the general public as they explore viral claims, how they spread, and who is behind them, but Hoaxy does not itself make any attempt to distinguish between true and false claims.

“It is up to users to inspect claims and their debunking information, if any, which is retrieved by the Hoaxy search engine."

Why All Cryptocurrency Should "Die in a Fire"