Leds: Beyond Lighting, Into Convergence

When the world's largest lighting company, Holland's Royal Philips NV, announced a new commercial LED installation in February, it did so in what might seem an unlikely setting: at a massive Cisco Systems love-in. So did Cree Inc., one of many upstart lighting companies that specialize in energy-efficient LED technology.

Both Philips and Cree chose to unveil their latest "smart lighting" initiatives at the Berlin installment of Cisco Live!, a lively four-times-a-year confab where the networking giant brings together Cisco developers, partners, and customers amid techno-hubbub that feels more Apple creative than it does dry old networking.

Cisco Live! is all about promoting and developing the Internet of Things, and the new lighting offerings play right into that theme. Philips and Durham, NC-based Cree both announced wins with customers that are installing Power over Ethernet (PoE) LED lighting systems. The Philips installation is at the Arnhem headquarters of Dutch energy utility Alliander; Cree's is at Mobile County Public Schools in Alabama.

In PoE lighting, both electricity and data flow over Ethernet cables that connect to LED troffers and luminaires, which become network nodes and which typically include sensors detecting not only lighting conditions, but also things like room occupancy, temperature, and security. It is taking root the way Ethernet-powered Voice over IP (VoIP) telephony did some 20 years ago before becoming today's office staple.

PoE lighting proponents cite myriad reasons why it is the future. Among them:

A common thread that runs through most of those benefits: data.

The net-connected luminaires with their sensors are constantly collecting information and acting upon it, through direct pre-programmed instructions (for example, "if there is a lot of daylight in the room, switch the lights off;" "if an unauthorized person enters, flash yellow;" "if there is smoke, flash red"), and trough data analysis that happens after information such as room occupancy lands in the right hands. The system is always collecting data about light usage, which is controlled both through central computers and by individuals communicating with the lighting system via smartphones. 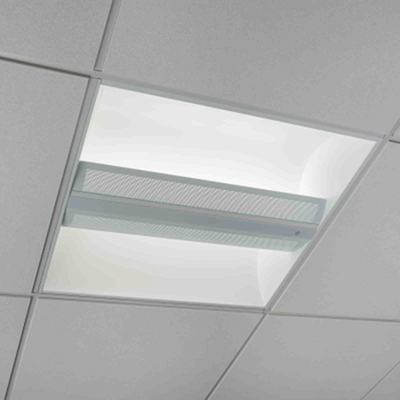 It is easy to imagine the data playing into bigger schemes in a business and IT world driven by big data concepts.

"Data is the new oil," Cisco chief technology officer Zorawar Biri Singh said in his Cisco Live! keynote address, predicting hundreds of billions of sensors and actuators will soon connect to the Internet to help extract and process that data. PoE LED lighting fixtures will be an important part of the rigging, so Cisco has rounded up over a dozen lighting partners, including Philips and Cree, as part of what it calls its "digital ceiling" initiative.

"Every light becomes a sensor, a point to get valuable data, bring it back, and really enable a new set of experiences and amazing things," said Tony Shakib, vice president of Cisco's Internet of Things vertical business unit. "The ceiling becomes an information highway."

Philips' customer Alliander certainly subscribes to that notion. It is tying 2,200 Philips sensor-equipped luminaires into a Cisco Ethernet network at its renovated headquarters in Arnhem.

"We have the opportunity to improve the use of our building through clever use of data," Alliander director of shared services Bart Blokland said in a prepared statement.

"Our alliance with Cisco is based on the premise that lighting is all around you; it's ubiquitous," said Philips' Bill Bien. "And it really is the foundation for the Internet of things. Why? Because it brings tangible benefits when it's digitized, and tangible energy savings."

That Philips and Cree chose the Cisco forum to make their big announcements spoke volumes for the new direction of the lighting industry, where illumination—long the staple product of lighting companies—is a launchpad into a brave new world where lighting is converging with the IT and Internet industry and becoming a major component in the fledgling IoT.

Cisco, an Ethernet company if ever there was one, hopes for a colossal leap in sales of the switches and routers that PoE lighting and its IoT milieu will require. It even is encouraging IoT application developers to write apps that would reside on network routers.

Cisco struck a PoE alliance with Philips in December, marking the first of its lighting partners.

It used its Berlin gathering to announce a host of new partners including Cree, as well as Molex, NuLEDs, Innovative Lighting, Platformatics, Eaton, and others.

"If you think about ‘phase 1’ of LED lighting adoption, we really spent much of the last nine years trying to convince people that LED lighting could replace the lighting that they’ve been used to, lighting provided by traditional technology," said Cree vice president of marketing Greg Merritt. "We’re now focused on the next stage of LED lighting. And this is where we’re able to leverage the power of new technology to not just mimic what people had before, but to go beyond what was possible before, and deliver people better lighting experiences."

One believer is Mobile County Public Schools, Alabama's largest school system, with some 58,000 students and 89 facilities. It is tying new Cree LED luminaires into its Cisco Ethernet network so staff and teachers can use the Internet to adjust on/off, brightness, color, and hue.

"We want to be pioneers of this," said David Akridge, the school system's executive manager of IT. Among the uses: Akridge says staff and teachers could adjust brightness, color, and color temperature of lights to fit student needs and teaching requirements. Cold blue-hued light could stimulate alertness, for instance, as studies of "human-centric" lighting (also known as circadian lighting) have shown. The lighting could also serve as an emergency and security system, flashing different colors for things like fire or dangerous intruders.

Like Alliander, Mobile County Schools is an early adopter of PoE technology. Other potential users will be watching closely.

Meanwhile, as the lighting industry and the IT industry get to know each other, it will be interesting to see whether one or the other takes ownership of the brave new lighting world. That lighting companies announced at a Cisco event, rather than the other way around, might be an early sign the IT side has the upper hand. The IT connection certainly gives lighting companies a higher point of entry in their "go to market" strategy than what they usually experience; traditionally, lighting companies have sold into operations and facilities managers. By falling in line with IT companies, they can become part of strategic, enterprise-wide sales pitches aimed at the C-suite to which IT companies more typically have access.

Network connectivity, noted Cree’s Merritt, is "one of the most exciting things to happen to lighting really since the LED itself."

While Cisco is arguably the most vocal of all the IT and Internet companies to be pursuing connected lighting, expect plenty of competition from the likes of IBM, Apple, Google, et. al.

As was clear in Berlin, the convergence games have opened.

Mark Halper is a freelance journalist based near Bristol, England. He covers everything from media moguls to subatomic particles.