Glancing at Barcelona's still-unfinished Sagrada Família Roman Catholic basilica, with its famous sandcastle-like exterior, it is easy to get the wrong idea about its architect, Antoni Gaudí, as a carefree, loosey-goosey artist. The whimsical exterior hides a geometrically sophisticated, structurally advanced design—a big part of the reason this grand basilica, begun in 1882, has taken so many decades to build, remaining the world's longest-running ongoing architectural project.

This complexity required an utterly different approach to modeling than what architects had typically deployed. Instead of using two-dimensional drawings to guide builders, Gaudí relied heavily on large, high-fidelity plaster models—models that needed to be reverse engineered and rebuilt after extensive damage during the Spanish Civil War. In a separate project, Gaudí pioneered the use of hanging-chain models that enable changes in real time; though he did not use these interactive models on the Sagrada Família, they guided his thinking and prefigured the so-called parametric design software that has been instrumental to the acceleration of the project's pace in recent years. 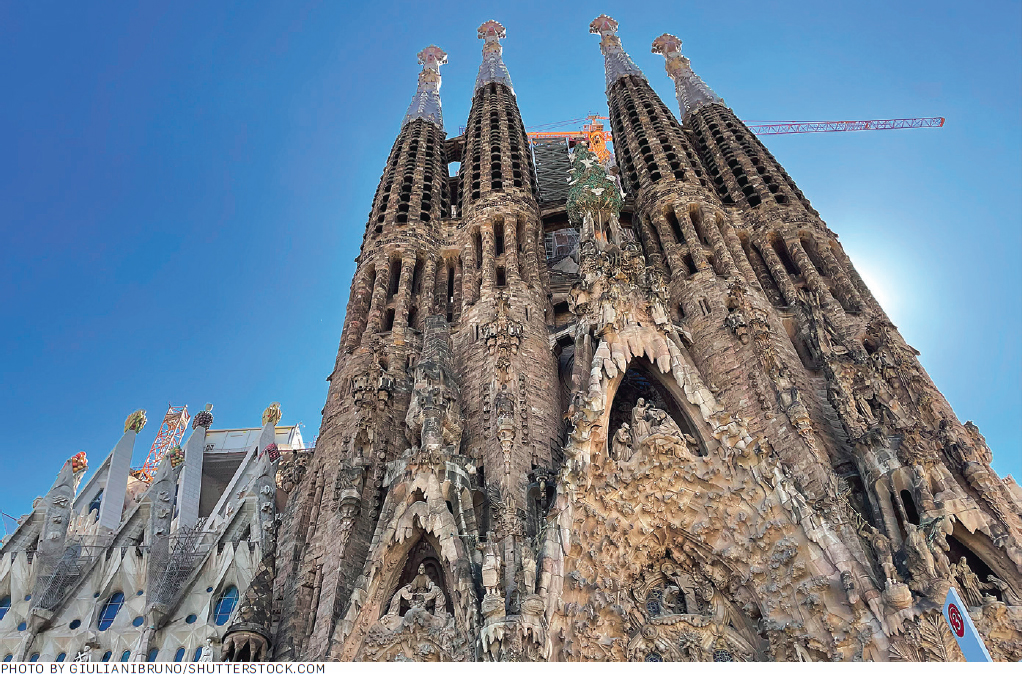 Figure. The exterior of the Sagrada Familia basilica, whose construction reflects the use of parametric design.

"Gaudí didn't like to draw; he liked to model," says Rafael Gomez-Moriana, a Barcelona-based architect and architecture critic who leads architectural tours of the city. "When you draw in two dimensions, you tend to limit yourself to those two dimensions," to the kinds of simple angles that can be drawn easily with a T-square and a triangle (set square). Gaudí resisted such limitations, preferring organic-looking shapes that took inspiration from trees and other natural creations. "Because Gaudí wanted to work with a vocabulary that was free from two-dimensional drawing conventions, it made sense that he would work with models," Gomez-Moriana explains.

To precisely communicate the intricacy of his vision to the stone masons working alongside him, Gaudí made extraordinarily large plaster models, usually on a scale of 1:25 and, for his master model, 1:10. "The stone masons were often going just straight from his model," says Mark Foster Gage, a Manhattan-based architect and a professor at the Yale University School of Architecture who has written about Gaudí. "The larger the model, the more accurate it would be." As a result, some of these models were an astounding 16 feet (about five meters) tall.

In one of the project's many setbacks, the Spanish Civil War (1936–1939) destroyed parts of the church and shattered the plaster models. Some effort went into restoring the models, but it was not until 1979 that information needed to be extracted from the model fragments for building purposes. That was also the year a young New Zealander named Mark Burry, a newly minted architecture graduate of the U.K.'s University of Cambridge, arrived to study the way Gaudí mixed architectural styles. He met with two elderly project leaders who had worked with Gaudí himself decades earlier, before the architect's death in 1926. When Burry asked them how Gaudí had communicated his vision to the people actually building the church, they showed him boxes and boxes of the broken, dust-covered plaster models.

Intrigued, Burry switched his focus to reconstructing these complex models. Before committing to a year-long contract, the elders gave him a week as a trial period to show that he had a working method. The good news was that he understood the problem: he needed to somehow reverse engineer the models' underlying geometries, which meant figuring out the points at which three adjacent three-dimensional surfaces intersected at a single point, called a triple point. "If you have a broken model, and you can at least find where those triple points are, you can then begin to unpack the constituent geometry," says Burry, who is now a professor at Australia's Swinburne University of Technology, and founding director of its Smart Cities Research Institute.

However, none of his education had taught him how to intersect these geometries. The project leaders had their eye on building the church's nave—the central part of the main building—and the nave's elaborate, kaleidoscopic ceiling is made up entirely of intersecting hyperboloids. "Every single opening in the ceiling and the windows of the nave is a hyperboloid of revolution—every single one," Burry says. A hyperboloid of revolution itself is not terribly complicated: it is the surface of the three-dimensional (3D) shape that is formed from rotating a hyperbola around its axis (and can be formed by lathing wet plaster spun on a model-maker's turntable). Once you start intersecting these surfaces, especially when the hyperboloids are not similar (say, a circular hyperboloid and an elliptical one), the resulting curves can become bewilderingly sinuous.

"If you have a broken model, and you can at least find where those triple points are, you can then begin to unpack the constituent geography."

So finding the triple point of three different hyperboloids is a real challenge. Gaudí himself had managed to figure out how to design these complex models through sheer genius, Burry says. Working through trial and error, the master achieved these extraordinary results in just a few iterations. "I am absolutely astonished that he was able to zero in on particular combinations with particular outcomes without having to do thousands of models," Burry says.

To begin reverse engineering Gaudí's models, Burry spent three days in a fruitless search for a solution to the triple-point problem—until, one morning, he woke up with a game-changing insight. "I don't know where it came from, but I knew I'd seen this problem before," he recalls. What dawned on him was that a mountain peak is, like any of Gaudí's triple points, a point at which the mountain's ridges intersect. Burry realized that Gaudí was, in a way, building a landscape.

"That's where it got easy for me," he says, because seeing the models as a landscape meant Burry could use the same tool geographers use to represent mountains. They use contours—topographic maps—in which all the points on a contour line represent the same height, with distances between contours corresponding to distances in elevation. "So if I could produce contours of these surfaces, I would be able to figure out where the intersections were and where the triple points were."

This insight enabled Burry to model the components of Gaudí's three-dimensional models on paper. With no software to aid him, it was slow, painstaking work, but in 1979, such software simply didn't exist. In fact, Burry recalls having traded in his slide rule for a calculator just a couple of years earlier.

A Revolution in Software

By 1989, though, when his colleagues at the Sagrada Família invited him back to resume the reverse-engineering effort, some architects had begun using software, and Burry thought he'd be able to do the same. "Computer experts said this will be a breeze using AutoCAD," Burry says. However, the experts he had spoken to were wrong. "I discovered that all the [available] architectural software was completely useless" for the task at hand. "I had this contract to get results, and I couldn't."

It was again time for Burry to take a page from another field. Designing boat hulls, he realized, poses the same spatial challenges, so he looked for boat-design software. Finding Intergraph VDS (for vehicle design system), he spent two weeks proving to himself that it could do the job. Yet, at about $75,000 per license, Intergraph was prohibitively expensive for the Sagrada Família. He found a suitable alternative from another company, Computervision, that granted him free access. This software ran only on pricey Sun workstations, but Burry got access to the requisite hardware through a collaboration with the Polytechnic University of Catalonia, in Barcelona, Spain, where he had secured a visiting professorship. The collaboration with the local university, which lasted for 26 years, went fantastically well, Burry says, with them responsible for the horizontal surfaces and him taking on the vertical ones—the columns and the windows.

Soon after Burry and his colleagues adopted Computervision's software, the company released a major upgrade that replaced explicit modeling (which merely mimics what an architect would normally do on paper) with parametric modeling, which gives designers an entirely different way of working. Using parametric (also called constraint-based) modeling software, an architect can change the value of one parameter and see the software immediately adjust the associated geometries according to predefined constraints. "That's the quantum leap in stepping away from Gaudí's world to the contemporary design world," Burry says.

While Gaudí worked a century before this software transformed architecture, he had actually done something conceptually similar to parametric modeling when he used his famous hanging-chain models to experiment with complex arch configurations in designing the Church of Colònia Güell, another unfinished project which, in Burry's view, would most likely have been Gaudí's best building had he been able to complete it.

Gaudí was drawn to catenary arches for their natural elegance. Unlike more traditional arches, which require support from either massive walls or flying buttresses, a catenary arch (mathematically, a hyperbolic cosine) supports its own weight. It can do so by minimizing the forces in compression much the way its upside-down analogue—a chain or rope suspended from two points—minimizes the forces in tension, perfectly distributing the natural force of gravity along the curve. Extending this basic idea, Gaudí created chandelier-like webs of chains hanging from other chains, pulling and deforming the chains (and thus their corresponding arches) in interesting ways. These catenary models are parametric, explains Gomez-Moriana, because whenever Gaudí made a tweak—lengthening a chain, say, or hanging a bag of lead shot to represent an additional load—the whole model would automatically adjust itself. "That's what a digital [parametric] model of a building allows you to do."

In the decades since beginning to go digital, the Sagrada Família has embraced other technologies. Three-dimensional (3D) scanners and printers have enabled additional types of model-making. And these days, stone-cutting robots are helping stone masons bring these designs to life.

Now in its final phases of construction, the Sagrada Família is scheduled for completion by 2026, for the centennial of Gaudí's death. "But," says Yale's Gage, "Just when you think they'll finish it, COVID comes," slowing construction once again.

To the fervently devout Gaudí, such delays might be a reminder of who's ultimately in charge. Known as God's architect, Gaudí once said, "My client can wait." Gage has a somewhat less-reverent take on the delays: "You almost have to wonder if God really wants this church," he says. Maybe, Gage adds, "He just really likes watching it be built."

Based in the San Francisco Bay area, Marina Krakovsky is the author of The Middleman Economy: How Brokers, Agents, Dealers, and Everyday Matchmakers Create Value and Profit (Palgrave Macmillan).

How Smarter AI Will Change Creativity