Autonomous Driving in the Face of Unconventional Odds

Despite the recent advances to achieve such promising vision, enabling autonomous vehicles in complex environments is still decades away.6 The problem turned out to be more difficult than expected and it is even harder in the extremely complex and challenging driving environments in many regions around the world, including most of the Arab region. In the coming subsections, we discuss the challenges facing the successful implementation of AD in the Arab region and map them to the four pillars of the Autonomous Vehicles Readiness Index.7 Finding solutions to those challenges will help deliver the benefits of AD to world regions that are in desperate need for it, as more than 90% of traffic deaths occur in low- and middle-income countries with Africa having the highest death rates.9 In addition, it is very beneficial to the automotive industry as 24% of the global automotive market sales are outside Europe, China, U.S., India, and Japan.5

Infrastructure challenges. The AD algorithmic pipeline employs a 'sense-plan-act' design,3 which is the basis of many robotic systems. Advanced sensors allowed for a more accurate sensing of the environment and the surrounding objects. Nevertheless, today's road infrastructure provides many open challenges to be fully solved in 'planning' the vehicle's actions based on understating the driving scene and eventually 'acting' by commanding the vehicle's control system. Based on our literature review, we conclude that road infrastructure quality is determined by 10 features: signs, marking, barriers, lane, shoulder, median, right-of-way, horizontal alignment, vertical alignment, and lighting. The number of features contributing to road safety problems increases considerably in the case of developing countries and the Arab region4 compared to developed countries. Arab-region specific problems include a combination of lack of lane markings, traffic signs, light poles, and roadside barriers. Add to that the higher traffic densities and unofficial pedestrian waiting areas, captured in Figure 1, and it creates a very challenging driving scene for the 'plan and act' algorithms. From another perspective, once adopted, a self-driving car is expected to generate more than four terabytes of data daily, while the communication infrastructure in many parts of the Arab region is not ready to accommodate such traffic requirements. 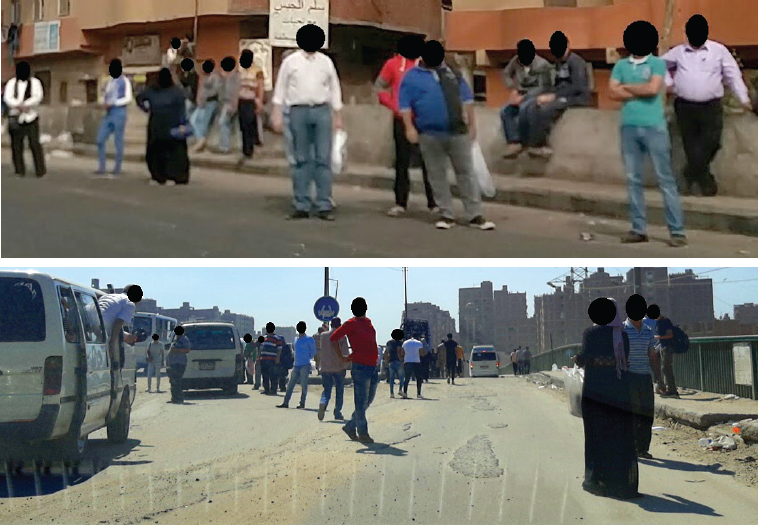 Figure 1. Common unofficial pedestrian waiting areas on highways in much of the Arab region.

The solution to improve road infrastructure should start by deploying Road Asset Management Systems (RAMS) to structurally plan and implement maintenance. In low-income countries, RAMS data collection process should be more frequent due to the low-cost material used, and hence it is more costly. Moreover, there is a lack of qualified experts for data analysis. One solution to the cost problem is to adopt more pervasive solutions encouraging drivers to participate in data collection and to rely on the modern deep learning-based scene understanding models to automate the analysis process. Besides road infrastructure, communication infrastructure must be extended to support new communication technologies such as 4G and 5G networks as well as V2I and V2V systems.

According to a recent survey, approximately half of UAE residents are likely to own a self-driving car in the next five years and 43% feel driverless cars are safer.

In the Arab region, UAE was recently ranked within the world top 10 countries in automated vehicles readiness.8 Moreover, Egypt is currently installing a unified network of cameras on roads that monitors traffic nationwide to help regulate drivers' behavior and improve road infrastructure. According to the World Economic Forum's 2019 road-quality report, UAE and Oman ranked 8th and 10th. Furthermore, the progress is noticeable—in a five-year period, Egypt's ranking jumped from to 29 from 118, and Algeria moved from 107 to 67.

Much of the problem of AD development is the need for a significant amount of training data to train complex machine learning algorithms, while some events are rare like witnessing an accident. Unfortunately, the overwhelming majority of the data collection efforts worldwide are not recorded in cities with chaotic driving. The challenging driving scenes created by the aforementioned road infrastructure challenges, in addition to unconventional traffic composition as captured in Figure 2, are not represented in the overwhelming majority of existing datasets. The problem can be illustrated briefly by imagining how many times such models will cause the vehicle to stop due to pedestrian false positive detections caused by passengers in the back of tricycles or pickup trucks, as these situations were not provided during the training time. In parts of the Arab region today, equipping a laser scanner (LiDAR) on a car is not allowed on public roads for national security reasons.

Figure 2. Unconventional traffic composition from the Arab region highways; a passenger tricycle, an auto rickshaw, an animal-driven vehicle, and a passenger pickup truck.

Applying transfer learning from the available models trained already on abundance of data from the developed countries' roads can be a solution to the data scarcity challenge. Key solutions for the need for 'long-tailed' distributions of data and handling imbalanced data distributions are to rely on synthetic data generation, multi-task learning, and to apply class-weighting methods and develop realistic simulators capturing the nature of driving in the region. Companies and universities data collection initiatives should be encouraged.

Legislation and culture challenges. In the autonomous era, the driving task is shared between the driver and the vehicle, yet accident liability is currently assigned to the driver. With the introduction of AD, regulations in developed countries started to adapt to the capability to self-drive without being actively controlled nor monitored by a human.

Accident liability started to consider automakers, and it is difficult to expect how automakers will respond to the regulations in developing countries with higher accident rates and traffic rules violations. Google's Waymo autonomous cars, the world's leader in miles driven, have driven 1/5th of the average human driving miles before a fatal accident.8 The number is a clear indicator that AD testing is far from proving it is safer than human driving, the regulatory safety standards in the Arab region, except Dubai, are not defined and, unfortunately, the developed regulations worldwide are neither unified nor directly applicable elsewhere.

Bureaucracy and leniency in law enforcement in parts of the Arab region could make it more complex to reach a satisfactory legislation for all stakeholders. Regulations should aim to precautionarily reduce the chances of creating dangerous driving situations. One example from the Arab region highlighting such necessity is the lack of standards governing highway billboards specifications, as in Figure 3 sample, which represents a serious source of driver distraction. Other examples include the leniency in following heavy vehicles allowed driving times regulations, driving in the opposite directions, unauthorized parking, and the lack of pedestrians' awareness about traffic regulations. 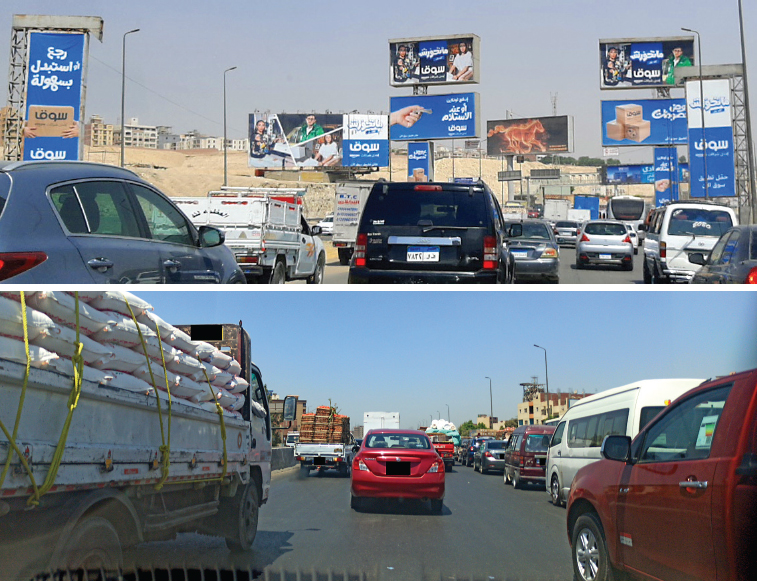 Accordingly, the Arab countries must start conversations among regulators, the public, and stakeholders about how autonomous vehicles and its operation should be regulated. It is important to build on top of the lessons learned from the developed countries legislation initiatives, such as the U.K.'s Automated and Electric Vehicles Act, and to aim for a unified regulatory framework across the region from the beginning. It is helpful to target a degree of consistency from the start given that vehicles are potentially capable of moving across borders. UAE started legislation of self-driving cars testing and accident responsibility. Such initiative can be an important guidance to the neighboring countries in the region to start. The defined regulatory safety standards should be flexible in terms of the data requirements for safety authorization. Moreover, the legislative approach should be clear and fair regarding accident liability and 'recklessness' identification. Bureaucracy should be reduced and testing of self-driving cars should be encouraged. Recently, Brightskies was authorized to test autonomous cars in Egypt and managed to reveal their first AD system. Volkswagen and the Qatar Investment Authority signed Project Qatar Mobility that aims to create a comprehensive ecosystem for AD, including the legal framework and infrastructure. Similar Initiatives like that should be encouraged across the region.

Innovation and technology challenges. A strong innovation ecosystem enables attracting investment and building the infrastructure for adopting AD. Despite the critical need for innovation in developing countries and the majority of the Arab region, they invest far less compared to advanced countries.2 The governmental sector, the private sector, and even the civil society must cooperate to encourage launching more initiatives for propelling innovation and to ensure sustainable investments in R&D. This includes educational programs at universities, participation in international scientific and industrial events, and promoting collaborative research efforts.

A promising example from the region is UAE, it ranked 34th in the 2020 Global Innovation Index. However, rankings for other Arab countries indicate they still have serious challenges. Regarding industry and academia collaboration, a successful example is conducted by KAUST University that launched self-driving shuttles on its campus to enable students and researchers to collaborate with the industry. Dubai's Roads and Transport Authority launched the second edition of the World Self-Driving Transport Challenge 2021, where firms and universities collaborate. Additionally, Valeo as a leader in the automotive industry, maintains several programs with universities in Egypt to bridge the gap between academia and industry through conducting funded joint research projects and developing technical courses. Valeo Egypt contributed to creating the healthy echo system that initiated automotive embedded software services start-ups in Egypt like Avelabs, eJad, AvidBeam, and Brightskies.

Customer acceptance challenges. The perception of autonomous vehicles varies in different regions based on culture, the level of technology awareness, and social interactions.1 Tailored awareness campaigns should be started targeting the public in Arab countries considering their needs and income levels. Governments and automakers should cooperate to encourage the adoption of autonomous vehicles through joint financial support programs. An example of effective introduction of the technology from the Arab region is the initiative of launching a fleet of self-driving electric shuttles in the 2022 FIFA World Cup in Qatar (see Abbar et al. on p. 67). According to a recent survey, approximately half of UAE residents are likely to own a self-driving car in the next five years and 43% feel driverless cars are safer. The region market is already attracting key stakeholders, as example, Neolix signed an agreement to test autonomous vehicles in Saudi Arabia and UAE customized for the region's weather conditions. AutoX aims to launch the region's first commercial 'robotaxi' and autonomous delivery service in UAE. Those examples show that despite the challenges, there are very promising opportunities for adopting self-driving technologies in the Arab region.

Unconventional challenges are facing the adoption of AD in the Arab region related to infrastructure, legislation, technology, and consumer acceptance. Those challenges threaten to deprive the region of the great benefits of such technology despite the desperate need and the great commercial value for carmakers. As a step to accelerate AD adoption in the Arab region, this article sheds light on those challenges and provided preliminary solutions building on existing efforts in the region. AD deployment should be considered a strategic goal that requires collaborative efforts from all stakeholders.

2. Cirera, X. and Maloney, W.F. The innovation paradox: Developing-country capabilities and the unrealized promise of technological catch-up. The World Bank, 2017.

Hesham M. Eraqi is Senior Expert of AI and Deep Learning at Valeo and Adjunct Faculty in the Computer Science and Engineering Department at the American University in Cairo, Egypt.

We Need a Global Push to Connect the World's Young People