Building a Research University in the Arab Region: The Case of KAUST

The establishment of King Abdullah University of Science and Technology (KAUST) in 2009 was the fulfillment of a lifelong dream of its founder, the late King Abdullah of Saudi Arabia. His vision for the university was deeply rooted in the historical and cultural contexts of the Middle East. He intended the university to be seen as a revival of the old "house of wisdom," which was a premier institution of learning in Baghdad from the 9th century until the 13th century. Starting as a private library of the fabled Caliph Harun Al-Rasheed, it developed quickly into the 9th century equivalent of a research laboratory and a university. The house of wisdom was the birthplace of algebra and was a milieu where many developments took place in various fields of science and humanities. It was sponsored generously by the Abbasid Caliphate and welcomed any knowledge seeker regardless of ethnic origin, religious beliefs, or sex.2 Its rise and fall coincide respectively with the start and end of the golden age of the Islamic civilization.

The first two professors to join the university were high-profile computational scientists, and the university procured a supercomputer even before it opened.

The king's vision was to establish a modern university that selectively picks from the best practices of modern, western universities. The model of the university was inspired by the California Institute of Technology (Caltech) in terms of its size and focus on STEM. The university's original research vision sought to focus on four major challenges that face the kingdom (and humanity at large), namely, food, water, energy and the environment.

Computer and Computational Sciences at KAUST

While the original four areas of research focus did not include computer science or computational sciences, these topics were a target of substantial investment from the beginning. In fact, the first two professors to join the university were high-profile computational scientists, and the university procured a supercomputer even before it opened. This was in recognition of the central role that computing takes in propelling research across a broad range of scientific endeavors. These investments were matched from the beginning by the popularity among student applicants, who disproportionally apply to computer science compared to other fields (although biosciences and electrical engineering sometimes come close). The popularity of computing did not stop there—today over half the faculty at KAUST use computational research methods, and this number is expected to grow as artificial intelligence continues to make inroads in all fields of scientific research.

Like Caltech, KAUST is a small university and aims to have around 225 professors at maturity. This posed an interesting challenge in setting the strategy for computer science: Should the focus be on breadth to cover as many topics as possible, or should the focus be on a few areas of depth? Taking advantage of the absence of undergraduate education's constraints, the decision was to follow the path of narrow depth over shallow breadth, as it was important to strive for critical mass and excellence. It was deemed important to establish the brand name of computer science at KAUST as a place where there are few areas of world class excellence. The areas of initial investments focused on biosciences and computer graphics, with two corresponding centers established as focal points. A center of extreme computing was later established in 2015.

In 2018, the appointment of Tony Chan, a prominent computational scientist, as university president signaled a transition in the university strategy. A "digital" focus was officially added to the original four, and a new strategy was drafted with a desire to establish new strengths in artificial intelligence, cybersecurity, robotics, smart health, and modeling. All these areas are within the realm of computer and computational sciences. Two centers in artificial intelligence and cybersecurity will soon be established. 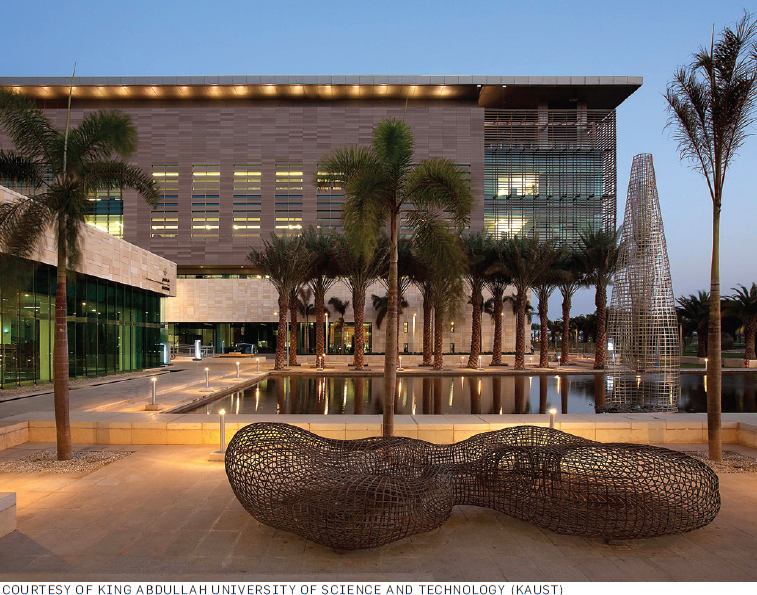 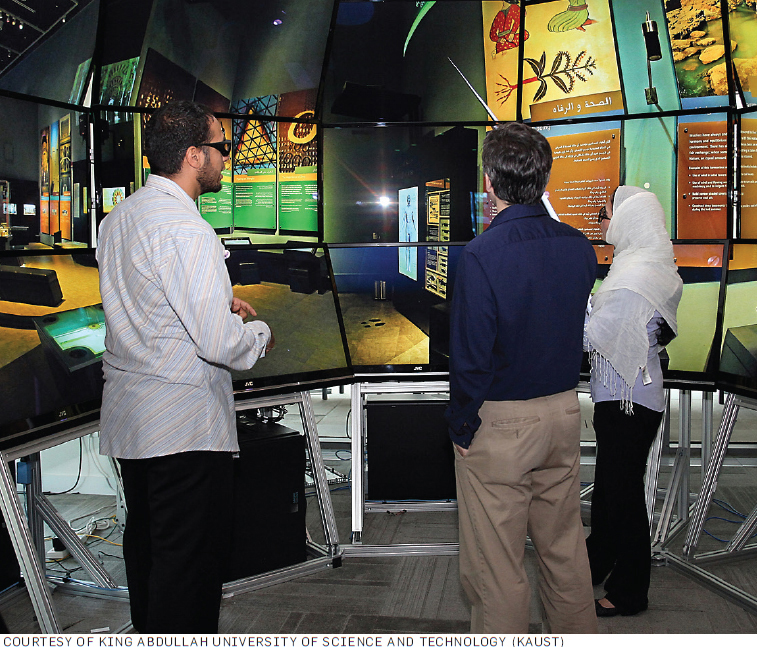 A university that is an 11-year-old institution is by definition "a work in progress." Yet, KAUST is a Saudi national project that was launched with lofty expectations, and it is inevitable that the issue of evaluation is a frequent topic of discussions. By traditional measures, it is unquestionably too early to declare success; but one can confidently glean several positive trends that are pointing in the right direction. For instance, a recently popular measure of evaluating universities is the sort of job placement that graduates receive upon completing their degrees.3 By this measure, KAUST has made great strides for a university of its age. Among the computer science alumni are assistant professors at the Toyota Technological Institute in Chicago and the University of California at Irvine and about a couple of dozen universities most notably in Saudi Arabia and China; research scientists at U.S. national laboratories such as Oakridge and Berkeley laboratories; postdoctoral fellows at Oxford, IBM Research, among other academic institutions of high repute; and choice positions in large firms such as Google at Mountain View, NVIDIA, ARAMCO, Intel among others. Another measure of evaluating universities is how they fare in rankings, though many ranking systems are controversial because of the subjectivity inherent in the process. In computer science, the CS Ranking1 is arguably one that uses only objective measures. In this ranking, KAUST's Visual Computing Center, which specializes in computer vision, computer graphics and visualization is ranked 12th worldwide in the period 2010–2020. If one includes all the areas in computer science at KAUST, the combined ranking comes to 37th worldwide for the same period.1 These are respectable rankings for a young, small department. In light of KAUST's performance in these measures, one can argue the vectors are pointing in the right direction, but a more nuanced and closer look calls for additional ways of measuring success. 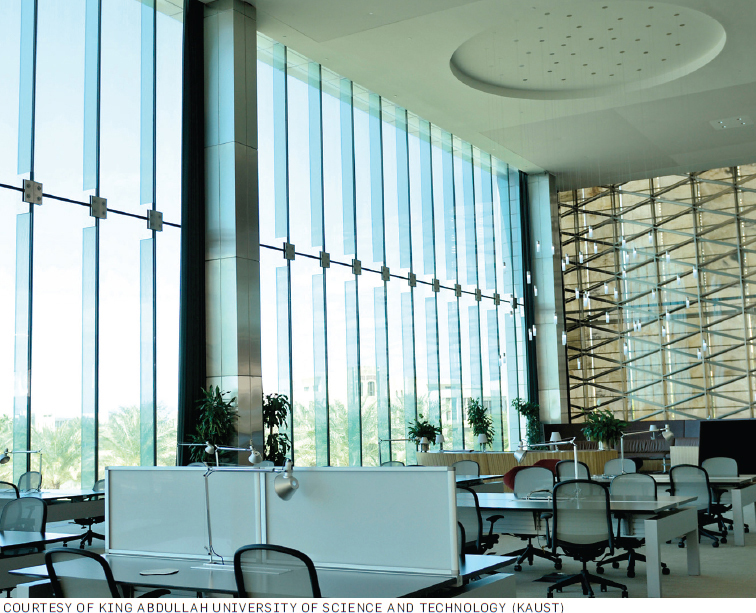 Figure. A library on the KAUST campus.

The aforementioned traditional measures of evaluating academic institutions have been borrowed from best practices in the developed world. They nevertheless may not be the most relevant in the Middle Eastern context. For example, success in job placement in places like Oxford or IBM Research overseas may be an undisputable indicator of the high quality of research and education that take place at KAUST, but they also indicate that the university may be unwittingly playing a role in the hemorrhage of talent outside the region. Similarly, rankings are often nuanced and controversial, and at any rate, should never be a goal by themselves. The Middle Eastern citizen who is footing the bill for the educational system has more serious problems for which a good university ranking may not prove very relevant. In fact, the overindulgence with rankings may well lead to undesirable behavior even in industrialized economies.4 This points to the need to develop indigenous systems of evaluation that take the local context into account, instead of merely copying the western models. Of course, a full-fledged discussion of this topic is an article in and of itself. However, one can list a few salient features that may be more relevant to the Middle Eastern context: The contribution to GDP and GDP growth, the number of companies that get started by young university graduates, the number of jobs created as a result of the research, and the development of indigenous new technologies that solve local problems directly and innovatively. None of these measures may be easy to compute objectively, but they will be more relevant to the local context than citations, h-index, or so-called high-impact publications. In this context, the indicators for computer science at KAUST are also positive. Several start-ups came out of the university graduates, deploying in Saudi Arabia amid a fledgling IT industry, with the university sometimes playing an investor role and sometimes an incubator. In fact, computer science has the lion's share of all the start-ups that were created by KAUST graduates. Additionally, the department has graduated many highly trained engineers and scientists who have stayed in the kingdom and contribute to the local economy, including international students who decided to stay. A more precise measure of the impact requires more work.

Computer science has the lion's share of all the start-ups that were created by KAUST graduates.

In closing, KAUST was the brainchild of a visionary king who wanted to revive the tenets of his culture, which places science and knowledge at the highest esteem. He established a modern-day house of wisdom as an international, research-oriented Middle Eastern university with an unusual model of funding and an unwavering commitment to diversity. Early indicators point to a successful operation and a promising future amid nontrivial challenges. The road ahead requires building on the early successes, but also there is a need to create stronger links to the local economy and to develop indigenous measures and metrics for success that are more relevant to the local context and that can highlight the contributions of the university in a manner that will be better appreciated.

E.N. (Mootaz) Elnozahy is currently a special advisor to the president and a professor of computer science at King Abdullah University of Science and Technology, Thuwal, Saudi Arabia. Previously, he was the dean of the Computer, Electrical and Mathematical Sciences and Engineering Division.

Do You Hear What I Hear? A Cyberattack.

Defining a Role for AI Ethics in National Security