Although robotic humanoids now perform backflips and autonomous drones fly in formation, even the most advanced robots are relatively primitive when compared with living machines. The running, jumping, swimming, and flying creatures that cover our planet's surface have long inspired engineers. Yet a subset of researchers are not just taking tips from living creatures. These roboticists, computer scientists, and bioengineers are combining artificial materials with living tissue, or making machines entirely from living cells. Some projects are even borrowing the tricks of life's greatest designer, evolution, to create robots that reimagine what the very term implies.

The field of evolutionary robotics, or allowing machines to develop their own forms without human intervention, is several decades old. Similarly, the idea of integrating living and artificial tissue is not a new one. The famed Terminator robot of the Arnold Schwarzenegger movies defined itself as a cybernetic organism, a mix of metal and flesh. In the real world, roboticist Francisco Valero-Cuevas of the University of Southern California has been testing his artificial nervous systems and spinal cords by hooking them up to biological tissue for years. In 2015, Harvard University bio-physicist Kevin Kit Parker and his colleagues designed an artificial sting ray powered by muscle cells harvested from rat hearts. 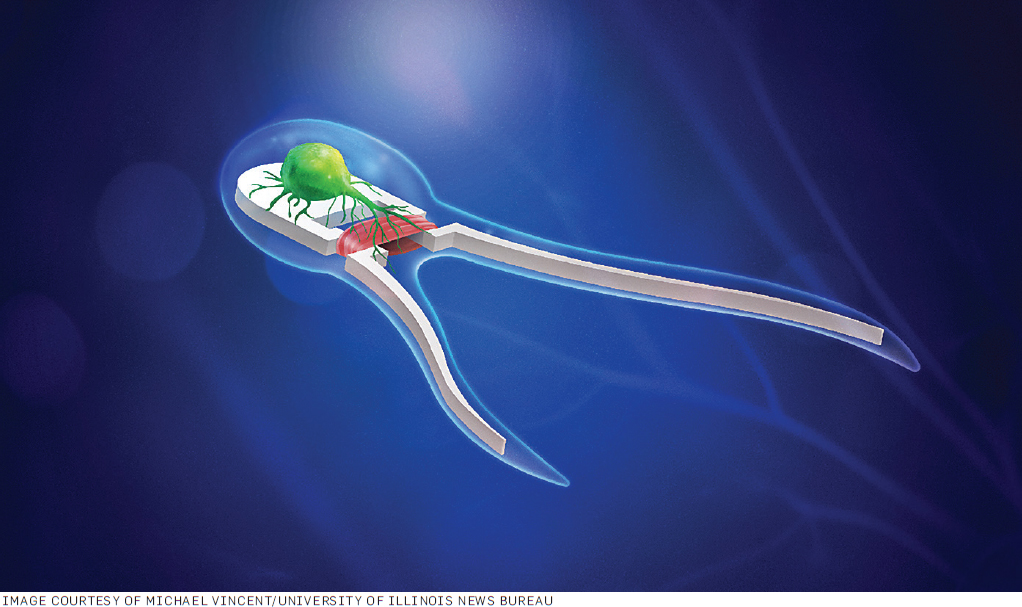 Now, however, researchers are also building living biological machines at a smaller scale. At the University of Illinois, mechanical engineer Taher Saif created a miniature swimmer by combining muscle tissue, motor neurons, and an engineered scaffold. The neuronal cells are optogenetic, which means they respond to light. Saif and his team activate their robots, called biobots, by shining light on these cells, which then switch on the muscle tissue and cause the miniature machines to swim.

Meanwhile, his colleague at the University of Illinois, bioengineer Rashid Bashir, and his team made miniature walkers using cells in combination with a three-dimensionally (3D) printed polymer skeleton approximately the length of a staple. To get the artificial legs to move, the researchers layered them with muscle cells that respond to electricity or light. "If you give the biobot a current or shine a blue light on it, the muscle actuates and the biobot walks," Bashir explains.

Programming these tiny machines is another sort of challenge. The cells in the biobots assembled around the scaffold on their own. The neuronal cells synchronized their activities and activated the muscle cells without intervention or instructions from the researchers. Even though the biobots do not have artificial brains, they still follow some kind of program. How this happens—how cells communicate and carry out a plan—remains a mystery.

"When the Wright Brothers were making planes, we already knew Newton's laws, so it was more of an engineering challenge. With biohybrid robots, we don't know how two cells talk to each other, the language by which they communicate with each other or with the engineered scaffold," says Saif. "So it's more like the Wright Brothers trying to make a plane in the 13th century, before we knew Newton's laws of gravity."

At the University of Vermont, computer scientists Josh Bongard and Sam Kriegman are working in tandem with developmental biologists Mike Levin and Douglas Blackiston at Tufts University to better understand some of these rules. The group is evolving living robots the size of a grain of sand, made from the skin cells of Xenopus laevis frog embryos, and dubbed xenobots. One of the main differences with their work is that the researchers play a smaller role in the design of the robot itself.

Bongard uses an evolutionary algorithm to generate candidate robot designs. "We tell the computer what we would like the xenobot to do—in our case, move across a surface as quickly as possible—and the computer evolves solutions," he says. The algorithm simulates tens of thousands of generations of different xenobots theoretically capable of carrying out this task on a 3,000-CPU-core supercomputer. From a day to a week later, Bongard and his team end up with approximately 100 designs for miniature moving robots. "You get all sorts of weird and wonderful shapes and designs," he says, "just as evolution tends to produce in nature."

"It's … like the Wright brothers trying to make a plane in the 13th century, before we knew Newton's laws of gravity," said University of Illinois mechanical engineer Taher Saif.

Next, Bongard and his team send their top candidates to their colleagues at Tufts, who decide which they might actually be able to make. This last part, for now, is a painstaking micro-surgery process carried out by hand. At Tufts, Levin and Blackiston select a few promising candidates, and Blackiston sculpts each xenobot out of living cells using a micro-cauterization tool.

The end-result, a physical xenobot about the size of a grain of sand, has no digestive or reproductive capacity. It is made from skin cells, but in a totally different configuration. Each xenobot uses energy stored in its cells, then degrades after a week. In this way, Bongard compares them to highly sophisticated wind-up toys. "They'd put them in the bottom of a petri dish, and in many cases the physical xenobots moved in the way the supercomputer predicted they would," Bongard says. "This was evidence we could combine automated design tools and simulation with manufacturing."

The work also represented proof they had crossed the reality gap.

Most of the work in evolutionary robotics has been carried out in simulation. Transferring these designs into functional real-world robots has proven difficult. "The fact that you can evolve something in simulation doesn't necessarily mean it will work in the real world," says roboticist Alan Winfield of the University of the West of England, Bristol.

The xenobots are physical manifestations of life that evolved in simulation. As Levin explains, if you were to look at any life form on Earth and ask why it walks, jumps, flies, or does anything else especially well, the answer would be that its ancestors were selected to do so. "This is the only life form where that whole evolutionary history took place inside a computer," Levin says. "These cells were not evolved for the ability to run around and do the things we see them doing. The evolutionary history happened on a computer in the Bongard lab."

The Vermont/Tufts team is not the only group looking to cross the reality gap. An international group of roboticists is working on this problem at a larger scale as part of the Autonomous Robot Evolution (ARE) project. ARE robots evolve both in simulation and in real space. Not all proposed forms are viable; some might rely on wheels that don't touch the ground, for example. The ARE program filters these candidates out, and viable robots are manufactured autonomously from a combination of 3D-printed and pre-fabricated parts. The latter, which include batteries, microprocessors, and wheels, can be thought of as organs, says roboticist Alan Winfield. "This is still biologically plausible, in an evolutionary sense, because the organs in our bodies evolved long before Homo sapiens," he says. "Biological evolution is highly modular."

A robotic fabricator prints the skeletal or structural parts, clips everything into place, and completes the wiring, with minimal human intervention. "It is literally fabricating a complete, evolved robot," Winfield says.

The eventual goal of all these projects is to make machines for real-world applications. Bashir and Saif at the University of Illinois envision robots with medical applications, such as miniature machines that actively pump blood through vessels. Winfield and his colleagues dream of robots that could evolve in situ on distant planets or moons; instead of sending a finished robot to the surface of an unknown world with unknown conditions, a space agency could send the machinery for evolving a robot. "The fitness function—locomotion, exploration, discovery of certain materials—could still be designed by humans," Winfield says, but the robot itself would be optimized for and manufactured on the surface of that planet, once the local physics is understood.

Xenobots are not purely intellectual constructs, either. Levin envisions them being used inside the human body to hunt down cancer cells in lymph nodes, reshape cartilage in arthritic knees, or scrape plaque off artery walls. Bongard imagines they could be used for environmental remediation in oceans, too; a swarm of such robots could be designed to clean up an oil spill over a wide area. Any such plan would have to be designed to minimize the negative impact on the environment, Bongard warns, but given that the xenobots degrade after seven days and have no reproductive capacity, the potential is real.

As for whether these cellular machines should be considered robots, experts like Bongard, Saif, and Bashir say there's no question. "Most people associate robots with materials, something made out of metal and electronics," Bongard says. "But the original meaning was something that does useful work for humans. That's the hope: that we can make these biological constructs do useful things for people."

Gregory Mone is the author or co-author of 10 books for children and adults, including the forthcoming novel The Accidental Invasion.