Are We Losing Momentum?

The International Telecommunications (ITU) estimated that more than half (51.2%) of the world's population was using the Internet (defined as using any Internet-based application from any location and device over the last three months) by the end of 2018. The outcome of a stunning pace of global growth, this marks the first time a majority of the world is using the Internet. However, it also highlights the fact that approximately half the world is not yet connected to the Internet. While the threats to Internet users are manyfrom misinformation or cyberstalking to an increasing loss of control over our personal data and privacyto be offline today means to be excluded from opportunities to learn and earn, to access valuable services, and to participate in democratic debate. Although a discussion on the value of connectivity is essential, and we recognize a need to define just what sort of Internet we want to build for the futurethis column focuses on those who remain unconnected and when they may come online.

In 2016, the United Nations (U.N.) declared Internet access a human right.a If we accept this U.N. position then those who remain unconnected are not merely inconvenienced, they are being denied a fundamental human right. The U.N. has developed connectivity targets including the U.N. Broadband Commission 2025 target (75% of the world using broadband Internet, 35% in least-developed countries or LDCs) and the U.N. Sustainable Development Goal 9c target for 2020 (universal and affordable access in LDCs). Based on the models presented in this column we are unlikely to meet either of these goals; instead our results indicate a general slowdown in growth in Internet use.

A Model for Estimating Global and Regional Internet Use

To predict future Internet connectivity levels we studied historical data provided by the International Telecommunications Union (ITU).b,c Limitations exist with this data, including the relatively short time series available, year-on-year intervals, and the different age ranges used to identify Internet populations in different countries. Also, the data is based on several assumptions including linear growth of the overall population, no substantial reduction of existing Internet users, and no significant new mass Internet connectivity projects.

We have proposed a projection model of the time series data and use it to forecast by simply continuing the model dynamics into the future. This allows us to get an estimation of how close (or far) we are to achieving the aforementioned U.N. SDG 2020 and Broadband Commission 2025 goals.

We focus on the three regions where the next 50% of users are most likely to come from: Latin America and the Caribbean; Asia and the Pacific; and Africa. Figure 1 provides the historical data, between 1995 and 2017/2018, of average Internet use rates for these regions, as well as globally. We also added projections for each region and the world up to 2025; the table in this column includes our estimates of Internet use rates for those target years. 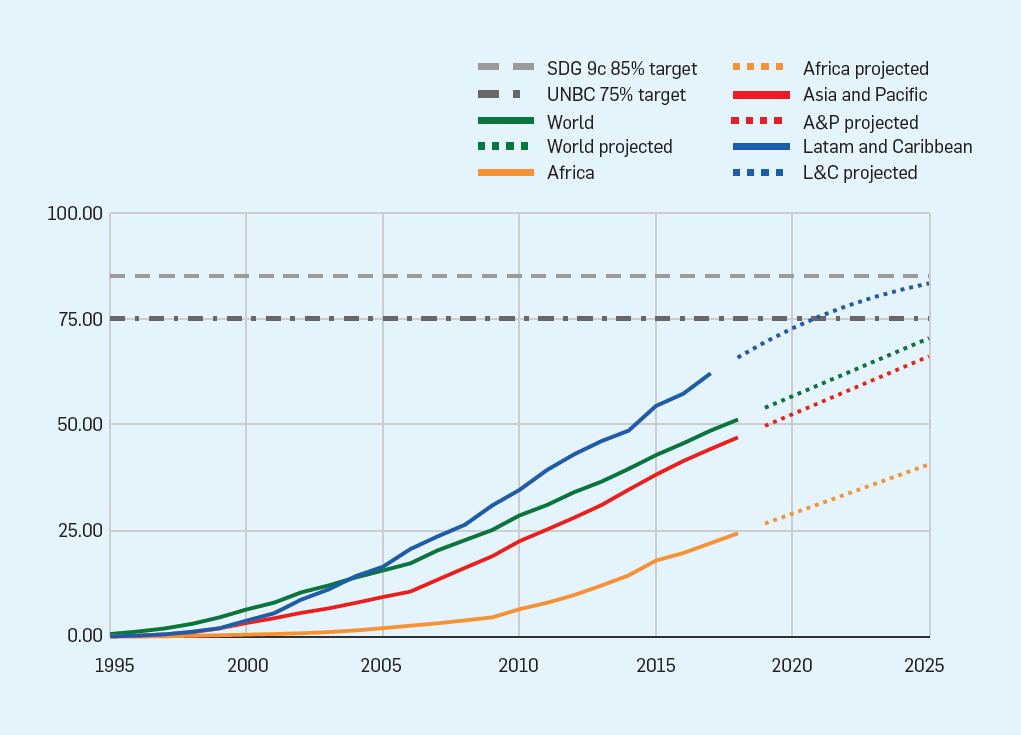 Based on these models, we will meet neither the U.N. SDG 9c 2020 nor Broadband Commission 2025 targets at current rates. The 2020 target calls for universal access in LDCs. "Universal access" does not necessarily imply that 100% of the population is online. Rather, we take an 85% adoption rate as universal access.d Clearly, we are a long way from even that milestone globally, and particularly for LDCs. The 2025 target calls for a 75% global broadband Internet use rate (and 35% in LDCs). Instead, by then we project 70% for global Internet use (broadly defined as mentioned earlier and may not include actual broadband use) and 31% in LDCs.

In attempting to understand these trends we draw on diffusion of innovation theory (for example, Rogers3) and specifically its application to Internet use (see for example Wolcott, et al.4). That research looks at many aspects of technology adoption including types of adopters and factors that drive overall adoption. This, in turn, has been applied to studies on trends in global and regional Internet use.1 According to the diffusion of innovation framework, adoption over time is typically described with an S-curve. That is, we will observe slow growth at first (indicating adoption among early users), followed by rapid growth (as the technology becomes mainstream), and ending with slow growth again (close to universal access as late adopters trickle on board).

This S-curve is present in Figure 2 when we look at high-income countries as defined by the World Bank and depicted by the green line.1 This curve shows an initial slow-growth phase for the first five years followed by 12 years of rapid growth between 1995 and 2007, followed again by slow growth from 2008 to present. This final slow-growth period of late adopters started with more than 65% of the entire population already online. 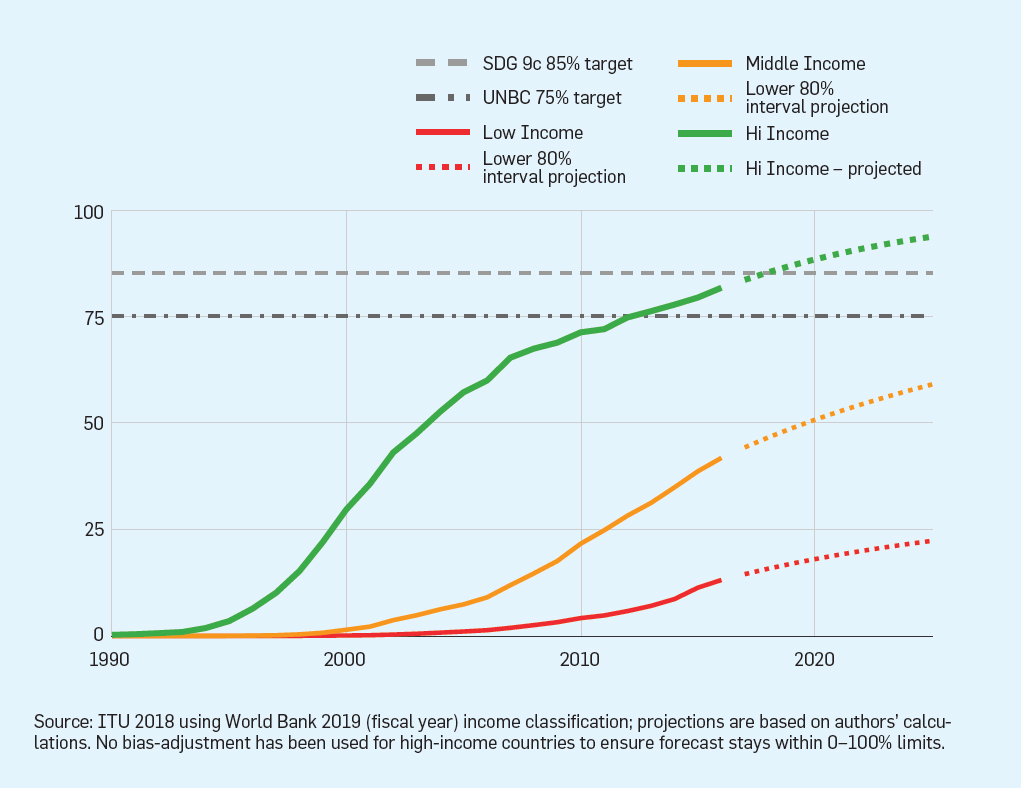 Turning to middle and low-income countries, we do not observe the same S-curve pattern compared to the high-income data. In particular, for middle and low-income countries, we see a slow-growth late adopter regime well before we hit universal access. While the final slow-growth phase in high-income countries started at approximately 65% penetration and continues above 85%, the projected slow-growth phase in middle and low-income economies could start as soon as 42% and 13% penetration rates respectively, without being preceded by an extended period of rapid exponential growth. In other words, while Internet use rates in high-income countries have begun to plateau around the universal access level, in low and middle-income countries the plateau may occur much earlier. Although this model, and its underlying datasets, does not allow us to robustly predict penetration rates decades into the future (and in any case, technology adoption prediction of this sort is error-prone), based upon this model if these regions are ever going to reach universal access it will not be for a very long time.

We are already experiencing slowing Internet access growth rates, particularly among low and middle-income countries. This is particularly salient given that it is in these countries that the next 50% reside, and points to the need for everyonepolicymakers, engineers, companies, and civil-societyto carefully assess current strategies if we wish to reach universal access. These offline groups are more likely to be women or older adults, with lower levels of education and employment, who live in rural communitiesso, specific policies to address not only these countries but also particular groups within them will be necessary to speed up adoption.

This column's model suggests we will fall short of the 2020 and 2025 U.N. targets. As shown in our projections, low and middle-income countries have yet to enter a rapid growth phase and may be at risk of moving into a slow growth phase well before approaching a point of universal access. This is worrying since 50% of the world that is still offline is mostly from these countries. If we adopt the U.N. position that the Internet is a human right, then this access gap is profoundly significant.

Reaching a world of broad universal access will require a combination of innovative policies, technologies, and new business models. Policies will need to address the specific reasons why some groups (for instance, women) are less likely to use the Internet. Service providers will need to adopt business models that can accommodate the needs of low-income and rural populations. And while innovative new technologies (such as global low-orbit satellites) look promising, we need to make sure that the right regulations are in place to ensure the greatest benefit for those who are not yet connected. Finally, we need improved and more transparent data sources and methodologies on Internet access and use, which can help overcome today's access gap and enable the realization of policy goals.

4. Wolcott, P. et al. A framework for assessing the global diffusion of the internet. Journal of the Association for Information Systems 2, 1 (2001).

Michael L. Best (mikeb@gatech.edu) is an Associate Professor of interactive computing and international affairs at the Georgia Institute of Technology, Atlanta, GA, USA.

a. 32nd session of the Human Rights Council; http://bit.ly/2sh7Flx

b. This is part of the ITU's World Telecommunications/ICT Indicators (WTI) database (June 2019 update). Other secondary data sources we consulted include: ITU ICT Statistics: Key ICT indicators for developed and developing countries and the world (totals and penetration rates: 2005-2018)see https://www.itu.int/en/itu-d/statistics/documents/; ITU ICT Statistics: Percentage of individuals using the internet (2000-2017)see https://www.itu.int/en/itu-d/statistics/documents/statistics/2018/; and World Bank: Individuals using the internet (% of population: 1989-2017)based on ITU datasee https://data.world-bank.org/indicator/it.net.user.zs

c. Our predictions are based upon exponential smoothing and ARIMA models for non-stationary time-series forecasting with 95% confidence intervals. We use the point averages as reference and the 80% lower confidence interval values as an alternative scenariofollowing the traditional diffusion of innovation theory S-curve pattern as described in this column. Calculations are available at the Web Foundation github repository; see https://www.github.com/TheWebFoundation/Internet-Users

d. Defining universal access is part of a complex ongoing discussion that is out of the scope of this column. For this analysis we take the population of five years and above as potential Internet users (based on UN population data; see http://bit.ly/348ypBS). Moreover, the ITU data suggests that even in high-income countries Internet penetration rates have plateaued between 80%-90% (which is understandable as some groups in the population may not be able to or interested in access). Thus, we take 85% as a reasonable and conservative reference for universal access.