Minding the AI Gap in LATAM

Societies and industries are rapidly changing due to the adoption of artificial intelligence (AI) and will face deep transformations in upcoming years. In this scenario, it becomes critical for under-represented communities in technology, in particular developing countries like Latin America, to foster initiatives that are committed to developing tools for the local adoption of AI. Latin America, as well as many non-English speaking regions, face several problems for the adoption of AI technology, including the lack of diverse and representative resources for automated learning tasks. A highly problematic area in this regard is natural language processing (NLP), which is strongly dependent on labeled datasets for learning. However, most state-of-the-art NLP resources are allocated to English. Therefore, creating efficient NLP tools for diverse languages requires an important investment of time and financial resources. To deal with such issues, our group has worked toward creating language-agnostic approaches as well as adapting and improving existing NLP techniques to local problems. In addition, we have focused on producing new state-of-the-art NLP publicly available data and models in Spanish. Next, we briefly present some of them.

Our group has worked toward creating language-agnostic approaches as well as adapting and improving existing NLP techniques to local problems.a

Twicalli, a social seismograph, and other crisis management tools. Timely detection and accurate description of natural disasters and other crisis situations are crucial for emergency management. This is challenging and important for our region, since one must rely on human observers appointed to specific geographical areas or on advanced infrastructure. In the case of earthquakes, geographically dense sensor networks are expensive. A viable inexpensive alternative to this problem is to detect events through people's reactions in online social networks, particularly on Twitter.a

With the help of an interdisciplinary group of linguists and experts in argumentation, we first determined the most important tasks and then developed machine learning methods to solve them.

Nevertheless, the massive number of messages in the data stream, along with the noise they contain, create a number of difficulties for worldwide detection. The common solution used to date has been to learn from labeled data to identify user messages related to a real-time earthquake.2,12 This approach does not scale well globally across countries and languages. Consequently, our group proposed a simple, yet efficient solution that, generally speaking, identifies the unusual increase in the frequency of multilingual textual features related to earthquakes within the Twitter stream.10 This method only requires a one-off semi-supervised initialization and can be scaled to track multiple features and thus, multiple crisis situations. Experimental results validate our approach as a competitive open source alternative to leading solutions, with the advantage of working independently of language and providing worldwide scalability. An instance of this framework is currently available as Twicalli (http://twicalli.cl) that provides visual "social seismograph" for the Chilean territory (as shown in Figure 1). Twicalli is used by the National Seismology Center in Chile, among other emergency response agencies nation-wide. Furthermore, we are in the process of incorporating a novel machine learning-based model for automatically estimating the Modified Mercalli Intensity Scaleb of an earthquake,9 and detecting in real time other types of crisis situations.13 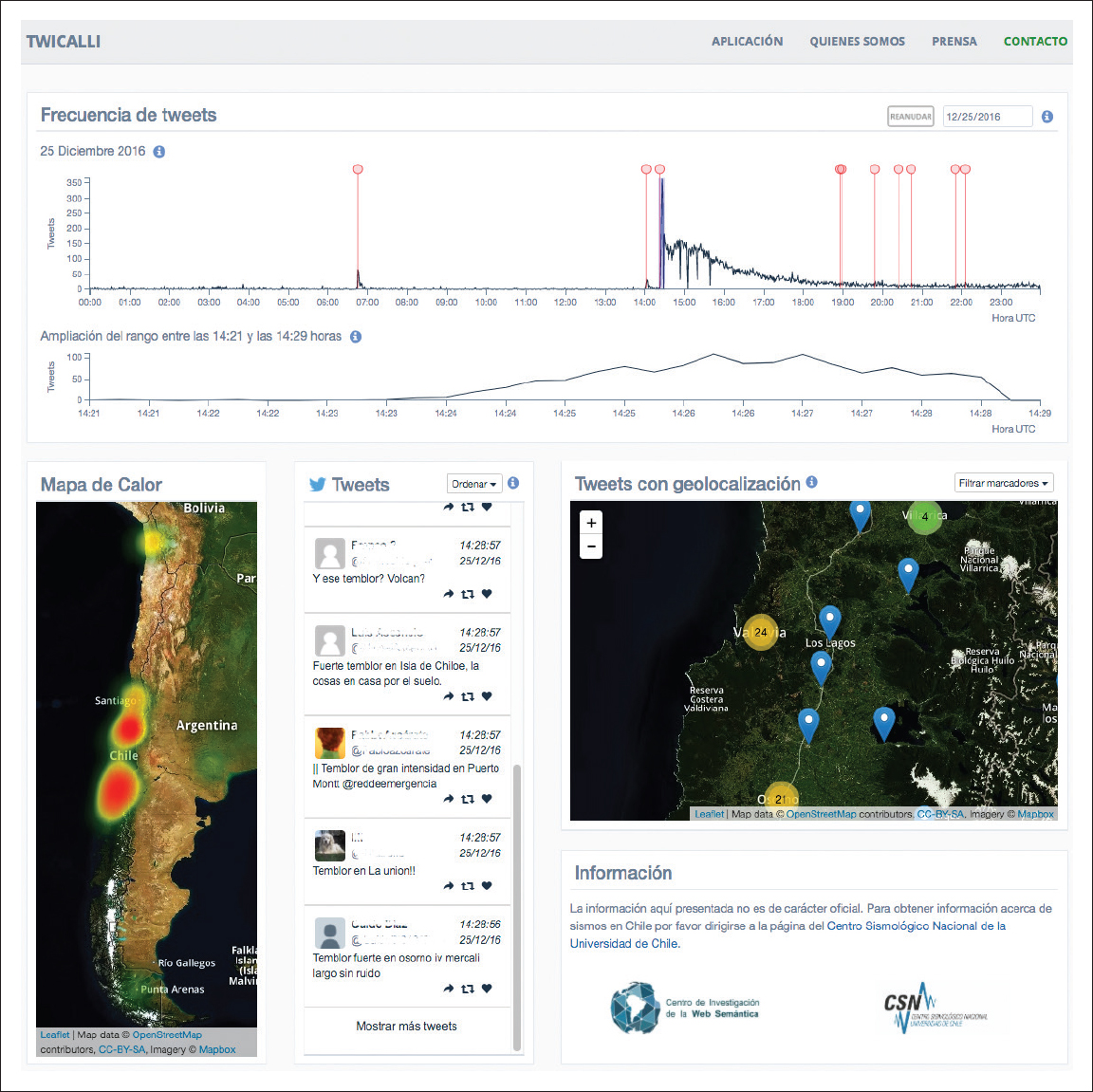 Political data and the Open Constitution Project. In 2016, Chile went through a collective open process to establish the guidelines of what a new political constitution should consider. From a technological point of view, an interesting aspect of the process was the use of digital platforms to collect the output of the deliberative instances that included discussions produced by 8,000+ small assemblies across the country. This resulted in a dataset of 200,000+ political arguments, which was openly published in a raw and anonymous form. This dataset was manually systematized through months of work. Hence, with the goal of making this process less time consuming, more objective, and scalable, we worked toward creating ways to automate at least parts of the systematization. With the help of an interdisciplinary group of linguists and experts in argumentation, we first determined the most important tasks and then developed machine learning methods to solve them. For example, we addressed the task of classifying raw text arguments into the corresponding "constitutional concept." For instance, the raw text "the state should provide free education for all" should be assigned to the concept "right to education." This was challenging, given we had more than 100 different constitutional concepts. Our best method achieved a top-5 accuracy of more than 90%.6 We created a visualization for exploring the dataset (http://constitucionabierta.cl/), which was widely used by the public and press, providing a much needed transparency to such an important process (see Figure 2). 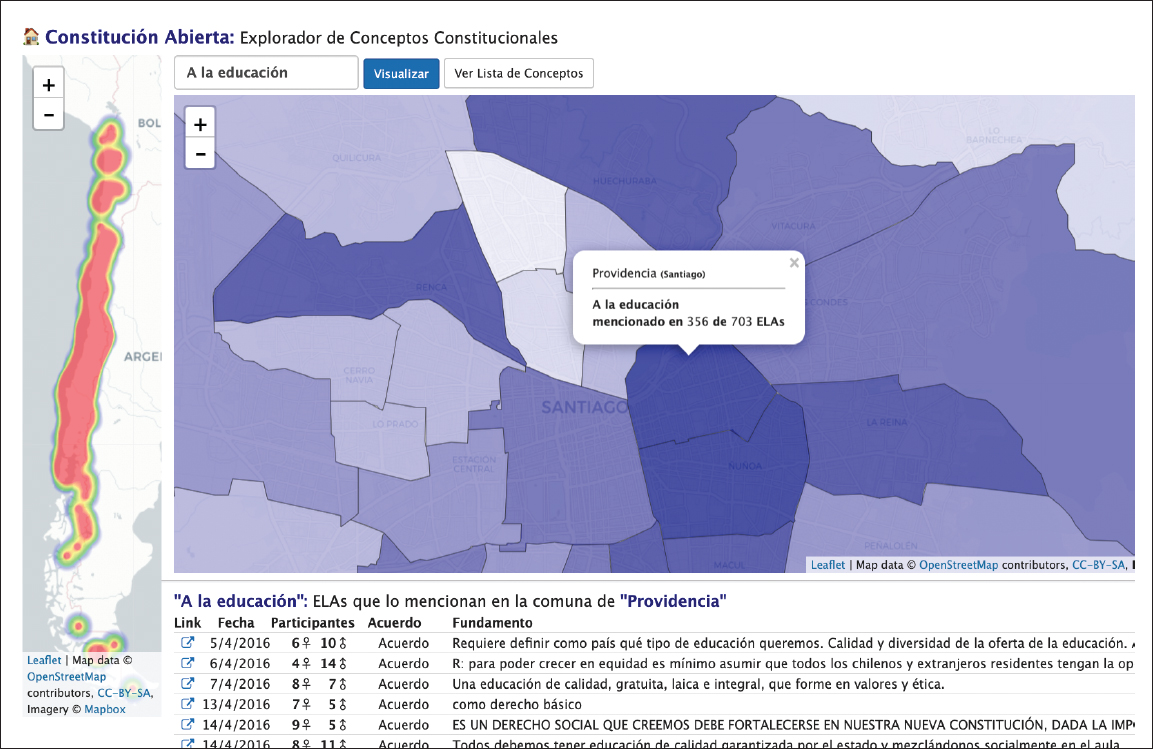 Figure 2. Interface of the website http://constitucionabierta.cl showing the distribution of the constitutional concept "right to education" in the 2016 Chilean Constitutional discussions dataset.

Two problems naturally arise in the context of our work analyzing social and political discussions; that of incivility, or hate speech,1,7 and the now ubiquitous problem of bias against minorities.3,8 Modern automatic tools for processing human-generated text should consider these issues as essential. However, these tasks are extremely challenging even for the English language. Specifically, our work has addressed how the lack of diversity in training data for hate-speech detection models induces an over-estimation of their performance in state-of-the-art approaches, and how this affects transferring this knowledge to other domains,1 such as Spanish.

An issue we have constantly faced, as have other researchers working with Spanish text data, is the lack of high-quality resources for developing, training, and testing models.

Spanish NLP resources. An issue we have constantly faced, as have other researchers working with Spanish text data, is the lack of high-quality resources for developing, training, and testing models. Some LATAM and Spanish groups have been tackling this problem by systematically producing freely available NLP resources for the whole research community.4,5,11,14,15 One set of resources of particular importance are Word Embeddings trained from big corpora.5,14,15 Our group has also developed a Spanish pretrained model based on Neural Self-Attention4 that has improved the state of the art in many NLP tasks in Spanish. We hope more groups in Latin America can join efforts to produce resources to improve NLP research and applications.

Acknowledgments. BP and JP were partially funded by Fondecyt grants 1191604 and 1200967, respectively.

Barbara Poblete is an associate professor in the Department of Computer Science at Universidad de Chile and an associate researcher at the Millennium Institute for Foundational Research on Data, Santiago, Chile.

Jorge Pérez is an associate professor in the Department of Computer Science at Universidad de Chile and an associate researcher at the Millennium Institute for Foundational Research on Data, Santiago, Chile.

Our House Is On Fire