Forests are the major terrestrial ecosystem responsible for carbon sequestration and storage. The Amazon rainforest is the world's largest tropical rainforest encompassing up to 2,124,000 square miles, covering a large area in South America including nine countries. The majority of that area (69%) lies in Brazil. Thus, Amazonia holds about 20% of the total carbon contained in the world's terrestrial vegetation.1,5,7 But the rampant deforestation due to illegal logging, mining, cattle ranching, and soy plantation are examples of threats to the vast region. Biodiversity loss, ecosystem imbalance, and higher concentration of carbon dioxide in the atmosphere are related consequences.9

This work presents advances in the way of a more accurate estimate of the carbon captured by forest areas, in particular the Amazon rainforest and its peculiarities.

Based on the directives given by the Intergovernmental Panel on Climate Change (IPCC), there is an urgent need to provide additional guidance on the design of forest monitoring systems. This involves issues such as forest inventory design, stratification, sampling, pools, accuracy/uncertainty assessment, and the combination of ground-based inventories with remote sensing and modeling approaches. Computing approaches can provide valuable tools to support the development of efficient solutions for this environmental problem. In this article, we present some ongoing research initiatives to address the carbon stock estimation problem.

We are interested in estimating carbon stocks by means of extrapolation and spatialization based on ground-based forest inventory combined with heterogeneous sources of remote sensing images through high-resolution satellite, radar, and LiDAR (Light Detecting and Ranging) 3D technology. One of our objectives consists of determining small areas of forest with high density of captured carbon through the application of artificial intelligence (AI) strategies involving pattern recognition, graph theory, image retrieval, machine learning, and combinatorial optimization techniques. In this article, we give some details of this work. In order to refine the carbon stock estimate, we present related research work addressing the detection of clearings in the Amazon rainforest based on satellite and radar images using machine learning techniques.

The forest inventory is the collection of attributes about the quantitative and qualitative characteristics of the forest, providing information on forest resources that are applied to monitoring, forest management policies, as well as strategic actions to exploit resources in a sustainable way. Along with this information, we highlight the measures of biodiversity, social aspects of the forest and biomass, and carbon stocks. On the other hand, the biomass of a forest is the quantity, by mass, of living or dead matter, present in the vegetation or only in its arboreal fraction. In general, it is measured by allometric equations developed by forest engineers. These equations make use of forest attributes given as inputs for their calculation, such as tree height, vegetation index, diameter at breast height (DBH) and tree crown diameter, among others (Figure 1). Its estimation is useful and stands out as an ecosystem assessment tool. With it, it is possible to carry out analyzes of productivity, energy conversion, nutrient cycling, absorption and storage of solar energy, as well as estimating the carbon storage. The latter can be estimated from forest biomass because the forest absorbs and stores carbon in its mass when it is in its development and growth phase. Therefore, forests act as sinks of carbon when they are in their phase of expansion and development. We developed a mobile application for the automatic determination of DBH (three-dimensional structure) of a tree, through the analysis of the photo from the camera of a smartphone applying image retrieval/processing and computational geometry techniques. 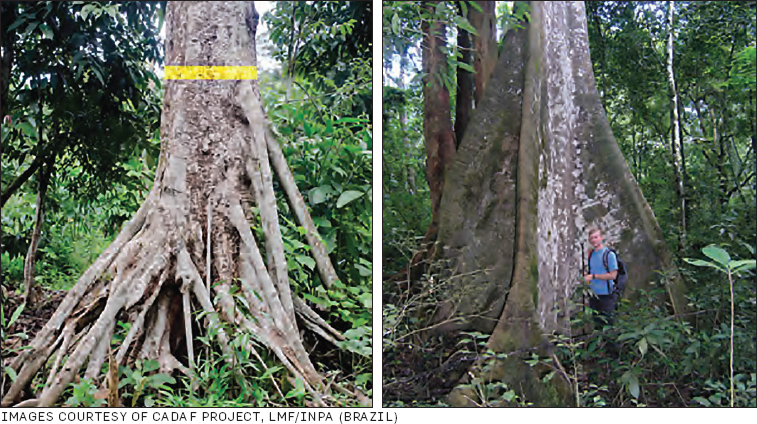 Figure 1. DBH measure of a tree in hard conditions.

Thus, given a forest region to be inventoried to estimate the carbon stock, it is important that the samples, or plots, be installed in places where there are more representative trees: the dominant (for example, the largest) and the emerging (tallest) trees. In the field survey, only the dominant trees are identified. On the other hand, using data from LiDAR images (Figure 2), it is possible to identify the emerging ones.4,6 In a more representative way, we can consider small areas with a higher density of captured carbon based on the average height of trees in a forest fragment. For this, it is necessary to determine the Digital Surface Model (DSM) and Digital Terrain Model (DTM) of each forest fragment (Figure 3). 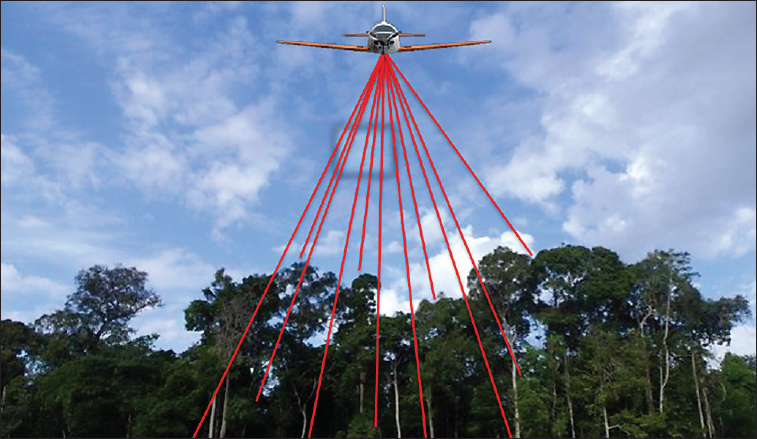 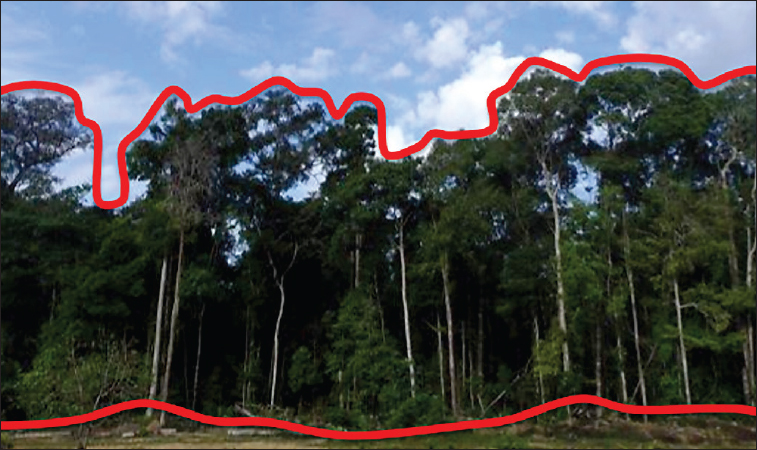 Figure 3. DSM and DTM calculate the average height of a segment of forest.

Thus, the problem of determining the most representative forest fragments was modeled as a Maximal Covering Location Problem (MCLP), which is NP-hard.2,3 In this problem, we have a set of plots from which the most representative ones will be extracted. Therefore, in the MCLP model the facilities will be the most representative plots and the demand will be each of the candidate plots. The representativeness index of the plots was calculated based on the sum of the average height of the trees of its n adjacent plots. A hybrid strategy combining an IP formulation and Greedy Randomized Adaptive Search Procedure (GRASP)10 indicates potential large-scale use.

Based on the amount of captured carbon calculated in the permanent sample plots forestry periodically inventoried, it was possible to carry out a comparative analysis with the estimated through the MCLP on the LIDAR point clouds of such regions (Figure 4), indicating the suitability of the strategy adopted. Extrapolations, considering the total Amazon rainforest area, indicates an increase of at least 4% to 10% in the total amount of Amazon carbon stock, which would give up to 30% of the total captured in terrestrial vegetation areas around the world.

Figure 4. LIDAR point cloud of a segment of the Amazon rainforest.

This line of research addresses the problem of automated detection of deforestation areas in the Amazon rainforest. Currently, there are image classification systems in use for detecting deforestation areas. However, small-scale clearing is a challenge that hinders detection from satellite monitoring. We have proposed an approach for classifying remote sensing images, comprising three steps: image segmentation, feature extraction, and classification.

Different techniques can be used in each of these steps. Experiments were performed with several classification algorithms, seven supervised techniques: SVM, decision tree, perceptron, random forest, logistic regression, KNN and naive Bayes; and two unsupervised ones: k-means and BIRCH. The goal is to find a classification model that best describes distinct patterns of deforestation in the images.

We have worked with a set of satellite images (Landsat™) characterized by color and texture measurements that constitute the features used for classification. The experiments performed used images from Barcelos (a municipality near the city of Manaus, the capital of the state of Amazonas in Brazil), comprising 26 images divided in 3.288 segments with at least 700 pixels each. The corresponding ground truth dataset is made of 1,636 clearing and 1,652 no-clearing segments. Figure 5 presents an example of an image segmentation. Note the segmentation approximately separates the areas with deforestation. This facilitates the classification step. There are 781 features per image segment.

Figure 5. A satellite image example and its corresponding segmentation applying (a) supervised and (b) unsupervised learning techniques.

Note, however, that this is a preliminary study with a small dataset. Nevertheless, given the vast majority of the Amazon region presents similar visual features, the results presented here are very promising.

We present two approaches that allow the refinement of the estimated carbon captured by the forest. The traditional techniques for estimating carbon are very general and are based on large areas of vegetation cover not taking into account discontinuities, such as clearing areas or the survey of small areas with a higher concentration of carbon. Thus, this work presents advances in the way of a more accurate estimate of the carbon captured by forest areas, in particular the Amazon rainforest and its peculiarities.

We have also developed an automated technique for the detection of deforestation areas in the Amazon. Although the image base tested is small, the results obtained are encouraging. It is necessary to perform experiments with a larger number of satellite and radar images from different areas in order to draw conclusive results. This can also help the carbon stock estimation based on the variation of deforestation in certain areas.

The goal of this article was to illustrate how the application of computational strategies based on AI, combined with high-resolution remote sensing, can provide valuable tools for efforts in environmental conservation.

Sergio Cleger is a researcher at PPGI, Manaus, Amazonas, Brazil.

How Objective is Peer Review?