In my first column on the IT profession, my opening question was whether a profession is needed in the first place. I wrote: "To most of the hundreds of millions of computer users around the world, the inner workings of a computer are an utter mystery. Opening the box holds as much attraction as lifting the hood of a car. Users look to computing professionals to help them with their needs for designing, locating, retrieving, using, configuring, programming, maintaining and understanding computers, networks, applications, and digital objects."1 The need has intensified over the years because there are now billions of users and the technologies they rely on are much more complex.

The ACM and IEEE Computer Society are the two main professional societies in computing. They are comparable in size with approximately 100,000 members each. ACM has traditionally emphasized the science-math side of computing, and IEEE-CS the engineering-design side of computing. The two societies have cooperated on many joint ventures including curriculum recommendations and accreditation. They have diverged on certification and licensing, which traditionally have been eschewed by ACM leadership and embraced by IEEE-CS leadership.

The next question was what specialties have professionals organized to deal with specific kinds of concernsfor example, specialists in programming languages, operating systems, networks, or graphics. The ACM SIGs and IEEE-CS hosted organizations to support these groups. ACM had (and still has) around 40 SIGs in specialized areas. The list of SIGs is a useful guide to the organized core specialties of computing.

However, the list of ACM and IEEE-CS specialty organizations does not come close to covering all the organized specialties in computing. There are two other categoriescomputing-intensive fields in science and engineering where computing is a tool but is not the focus of concern, and computing-infrastructure occupations, where specialists operate and maintain the infrastructures on which everyone depends. Table 1 is an update of the original table,1,2 now showing 52 specialties. 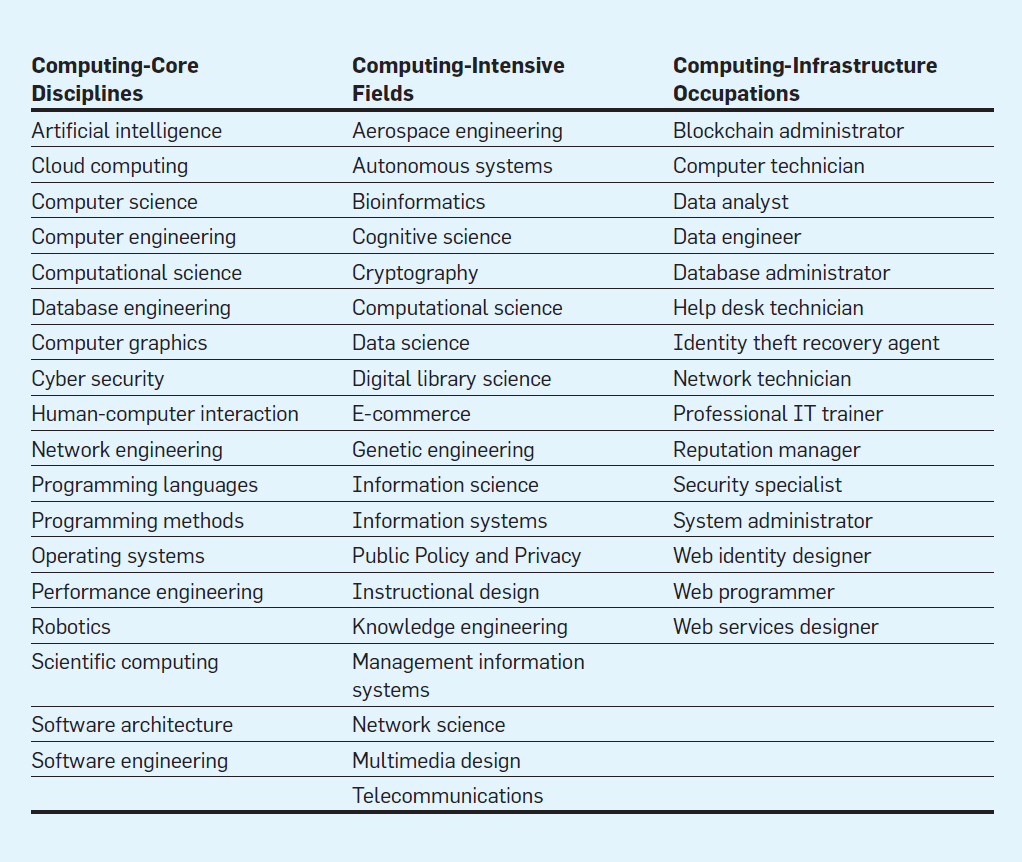 Table 1 reflects the interests of the members of ACM and IEEE-CS. However, this is not the only way to categorize computing professionals. The U.S. Bureau of Labor statistics maintains a list of "computer and information technology occupations" that spells out the kinds of jobs employers recruit for. Table 2 summarizes the BLS information about computing.a Table 1 can be seen as an enumeration of the specialties covered by the groups listed in Table 2. No matter how you look at it, there is a huge market for computing professionals.

Between them, the ACM, IEEE-CS, and a large network of education institutions provide an extensive support structure for computing professionals, including these elements:2,3

ACM and the Profession

The ACM's founders in 1947 believed that computers would be a permanent source of attention and concern, eventually permeating all fields. ACM's initial responses to this concern were a computing research journal (Journal of the ACM), a newsletter (Communications of the ACM), and a network of local chapters. Beginning in the early 1960s, ACM developed and maintained a code of ethics. The first computer science departments were founded in 1962 and ACM issued its first curriculum recommendations in 1968. Around 1985, ACM began partnering with IEEE-CS on accreditation and upgrades to curriculum recommendations. Over the years, ACM/IEEE-CS have evolved successively more sophisticated curriculum recommendations into a "computing body of knowledge." ACM has supported professionals in developing competencies through its professional development center and ongoing discussions about good professional practice in Communications and ACM Queue magazines. Since the 1960s, ACM has hosted more than 40 special interest groups (SIGs) in various specialties of computing.

In 2001, I wrote that the biggest challenge for ACM in fostering a profession would be academic computer scientists giving up the illusion they could either control the profession or be seen as its leaders. Computing was spreading prolifically and professionals in other fields were independently organizing professional groups to support them. A conspicuous example was the computational sciences, such as computational physics, computational chemistry, or computational biology, where professional groups were being organized independent of ACM or IEEE. At the time, computer scientists were not very open to reaching out to other fields and helping them meet their own needs in computing. Over the years, ACM has embraced this challenge and has become much better at reaching out to other fields. ACM has settled into a role as a "curator of the flame," providing the definitions, bodies of knowledge, and standards of practice for computing wherever it appears.

One of the consequences of the spread of computing into everyone's lives is that the public mood has been shifting to the notion that essential knowledge to support education and advancement of the profession should be free to the public. The ACM Digital Library, which has been feeling the pressure of this mood for several years, now supports open access to research papers for which the authors have paid an up-front open access fee. The library itself is available to more practicing professionals because ACM grants access through licenses to organizations. These changes have reduced revenues for digital library and other publication subscriptions. While it does not have a final answer, ACM has been making good headway toward finding revenues to support its knowledge base in a way that it can ultimately be free to the public.

But ACM's biggest challenge concerns the relations between two major sectors of its members. The "academic-research" sector is members who are on the faculty of universities and colleges or are employed by industry research labs. The "practitioner" sector is members who are practicing non-academic professionals, either self employed or employed by a company. ACM sometimes uses the term "industry professional" for practitioner.

One aspect of this challenge is bridging the gap between ACM's treasure trove of research papers (in the digital library) and the working worlds of practitioners. Most research papers are communications among researchers that enable the advancement of a research field. Many practitioners, however, find these papers difficult at best and opaque at worst. Bridging the gap means finding authors who understand both worlds and can translate the key ideas of research into useful ideas for practice. This is quite difficult because few such authors exist. A fine example is the The Morning Paper, a five-times weekly blog by Adrian Colyer in the U.K. (http://blog.acolyer.org); in each issue, Colyer translates a research paper into terms and connections that practitioners can use. Colyer has a relationship with ACM through the Practitioners Board.

Another aspect of this challenge is in leadership: ACM has lost its ability to populate its leadership positions with a mixture of academic-research and practitioner professionals so that these two worlds will get to know each other and work together for a stronger profession. All members of the ACM Council, and most of the SIG leadership, are from the academic-research sector. ACM has been particularly good at supporting its professional academic and research members with first-rate, widely respected publications, conferences, and awards. ACM has been less attentive to helping practitioners develop their professional skills, at articulating standards for essential professional skills, or at developing awards and other recognitions for industry professionals. The ACM Nominating Committee has its work cut out for it.

ACM could do much more in recognizing practitioner members for their contributions. Most ACM awards today go to members of the academic-research sector. The Distinguished Service Award, initially chartered in the 1960s as an industry professional award co-equal in prestige to the Turing Award, has faded into semi-obscurity and is now the only ACM award with no purse; it could be rejuvenated as a major recognition for senior practitioner members. ACM could also set up new awards explicitly for the practitioner sector.

Although ACM has major programs for practitionersincluding professional development, learning center, and Queue magazinepractitioner members frequently tell us that ACM does not understand them. The Practitioner Board, under the leadership of Terry Coata and Stephen Ibaraki, has begun to turn this around, with 50 practitioner volunteers helping the board and another 100 providing advice through the GPAC network.

In my opinion, however, ACM will not achieve its goal of supporting a computing profession and its practitioners without a concerted effort to bring practitioners into ACM leadership positions and give them more professional recognitions. IEEE-CS has been more successful with this than ACM.

Individual members further their professional development by using the services and support structures of ACM and IEEE-CS, and by improving their own personal practices in their professional relations with clients. I have aimed the 64 The Profession of IT columns published since 2001 to support the latter. These columns have examined various aspects of the profession including the nature of the profession, education for professionals, innovation, language-action, the Internet, software, moods, jobs, and time management. You can find them on my website.b Please contact me with your questions or issues that I can address in future columns.

Computing has come a long way in the 70 years since its founders' first inklings that computing would become a pervasive professional concern. ACM has developed an impressive array of offers in publications, a digital library, conferences, chapters, support for professional education, support for practitioners, and awards. Its biggest challenge is integrating its academic-research and practitioner sectors. I expect significant progress on this challenge in the next decade.

Russia's War in Ukraine Could Spur Another Global Chip Shortage