Compilers should not miscompile. Peephole optimizations, which perform local rewriting of the input program to improve the efficiency of generated code, are a persistent source of compiler bugs. We created Alive, a domain-specific language for writing optimizations and for automatically either proving them correct or else generating counterexamples. Furthermore, Alive can be automatically translated into C++ code that is suitable for inclusion in an LLVM optimization pass. Alive is based on an attempt to balance usability and formal methods; for example, it capturesbut largely hidesthe detailed semantics of the various kinds of undefined behavior. Alive has found numerous bugs in the LLVM compiler and is being used by LLVM developers.

Compiler optimizations should be efficient, effective, and correctbut meeting all of these goals is difficult. In practice, whereas efficiency and effectiveness are relatively easy to quantify, correctness is not. Incorrect compiler optimizations can remain latent for long periods of time; the resulting problems are subtle and difficult to diagnose since the incorrectness is introduced at a level of abstraction lower than the one where software developers typically work.

Random testing7, 20 is one approach to improving the correctness of compilers; it has been shown to be effective, but of course testing misses bugs. A stronger form of insurance against compiler bugs can be provided by a proof that the compiler is correct (compiler verification) or a proof that a particular compilation was correct (translation validation). The state of the art in compiler verification requires a fresh compiler implementation and many person-years of proof engineering (e.g., CompCert9), making this appoach impractical in most production environments. 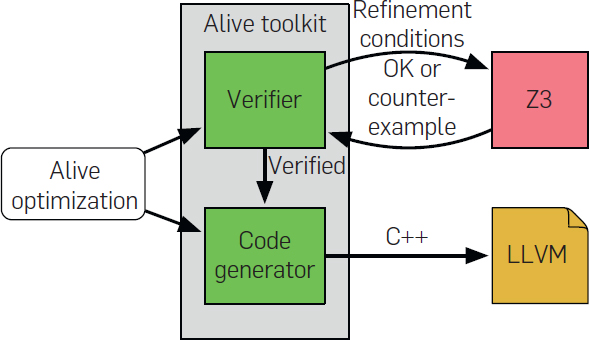 Figure 1. Overview of Alive. Optimizations expressed in Alive are automatically verified using the Z3 SMT solver. Verified optimizations are converted to C++ implementations for use in LLVM.

and the optimized code:

In Alive the same optimization is:

The Alive specification is designed to resembleboth syntactically and semanticallythe LLVM transformation that it describes. It is much more succinct than its equivalent C++ implementation, is not expressed in terms of LLVM's internal data structures and control flow, and can be automatically verified by the Alive tool kit. This transformation illustrates 2 forms of abstraction supported by Alive: abstraction over choice of a compile-time constant and abstraction over bitwidth.

So far Alive has helped us discover twenty-three previously unknown bugs in the LLVM InstCombine transformations. Furthermore, we have prevented dozens of bugs from getting into LLVM by monitoring the various InstCombine patches as they were committed to the LLVM subversion repository. Several LLVM developers are currently using the Alive prototype to check their InstCombine transformations. Alive is open source and it is also available on-line at http://rise4fun.com/Alive.

We designed Alive to resemble the LLVM IR because our usersthe LLVM developersare already experts with it. Alive's most important features include its abstraction over choice of constants, over the bitwidths of operands (Section 2.2), and over LLVM's instruction attributes that control undefined behavior (Section 2.4).

An Alive transformation has the form A B, where A is the source template (unoptimized code) and B is the target template (optimized code). Additionally, a transformation may include a precondition. Since Alive's representation, like LLVM's, is based on directed graphs of instructions in Static Single Assignment (SSA) form, the ordering of non-dependent instructions is irrelevant.

Alive implements a subset of LLVM's integer and pointer instructions. It also has limited support for branches: to avoid loops, they are not allowed to jump backwards. Alive supports LLVM's nsw, nuw, and exact instruction attributes that weaken the behavior of integer instructions by adding undefined behaviors.

Alive supports a subset of LLVM's types, such as integers and pointers. LLVM uses arbitrarily-sized integers, with a separate type for each width (e.g., i8 or i57). Alive has limited support for LLVM's pointer and array types, and does not supports structures or vectors. Recent efforts have subsequently extended Alive with support for floating-point types.14, 16

Unlike LLVM, Alive permits type annotations to be omitted and does not require values to have a unique type. This enables succinct specifications of optimizations in Alive, as many peephole optimizations are not type-specific. A set of possible types is inferred for each implicitly-typed value, and the correctness of an optimization is checked for each type assignment. Because LLVM has infinitely many integer types, we set an upper bound of 64 bits for implicitly typed integer values.

Some peephole optimizations use the results of dataflow analyses. Alive makes these results available using a collection of built-in predicates such as isPowerOf2(), MaskedValueIsZero(), and WillNotOverflowSignedAdd(). The analyses producing these results are trusted by Alive: verifying their correctness is not within Alive's scope. Predicates can be combined with the usual logical connectives. Figure 2 shows an example transformation that includes a built-in predicate in its precondition.

To aggressively optimize well-defined programs, LLVM has 3 distinct kinds of undefined behavior. Together, they enable many desirable optimizations, and LLVM aggressively exploits these opportunities.

Table 1 shows when Alive's arithmetic instructions have defined behavior, following the LLVM IR specification. For example, the udiv instruction is defined only when the dividend is non-zero. With the exception of memory access instructions (discussed in the original paper10), instructions not listed in Table 1 are always defined.

Table 1. The constraints for arithmetic instructions to be defined. <u is unsigned less-than. INT_MIN is the smallest signed integer value for a given bitwidth.

The undefined value (undef in the IR) is a limited form of undefined behavior that mimics a free-floating hardware register than can return any value each time it is read. Semantically, undef stands for the set of all possible bit patterns for a particular type; the compiler is free to pick a convenient value for each use of undef to enable aggressive optimizations. For example, a 1-bit undefined value, sign-extended to 32 bits, produces a variable containing either all 0s or all 1s.

Shift instructions, shl, ashr, and lshr, produce a poison value when their second argument, the shift amount, is larger than or equal to the bit width of the operation.

Instruction attributes modify the behavior of some LLVM instructions. The nsw attribute ("no signed wrap") makes signed overflow undefined. For example, this Alive transformation, which is equivalent to the optimization of (x+1) >x to 1 in C and C ++ where x is a signed integer, is valid:

An analogous nuw attribute exists to rule out unsigned wrap. If an add, subtract, multiply, or left shift operation with an nsw or nuw attribute overflows, the result is poison. Additionally, LLVM's right shift and divide instructions have an exact attribute that requires an operation to not be lossy. Table 2 provides the constraints for the instructions to be poison-free. Developers writing Alive patterns can omit instruction attributes, in which case Alive infers where they can be safely placed. 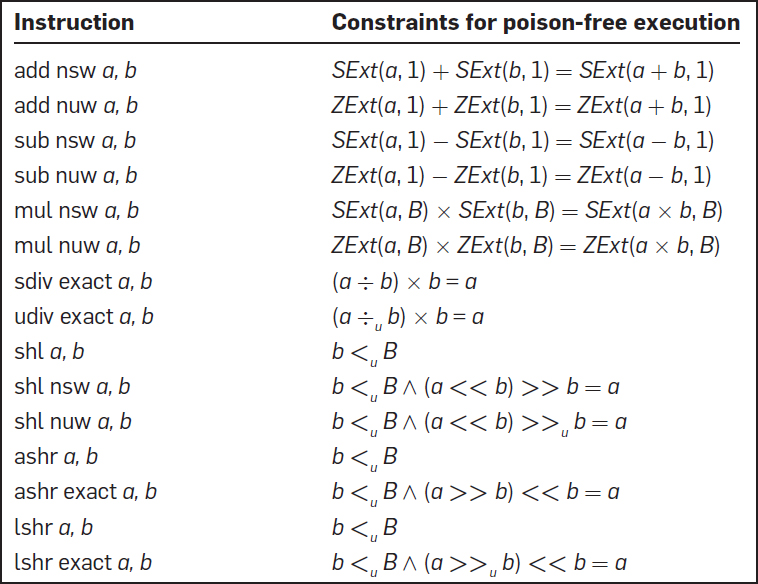 The Alive interpreter verifies a transformation by automatically encoding the source and target, their definedness conditions, and the overall correctness criteria into SMT queries. An Alive transformation is parametric over the set of all feasible types: the concrete types satisfying the constraints of LLVM's type system and not exceeding the default limit of 64 bits.

To determine whether these conditions hold, we ask an SMT solver to find cases where they are violated. When found, these counter-examples are reported to the user, as shown in Figure 3. Conversely, if the SMT solver can show that no counter-example exists, then the conditions must hold and the optimization is valid. 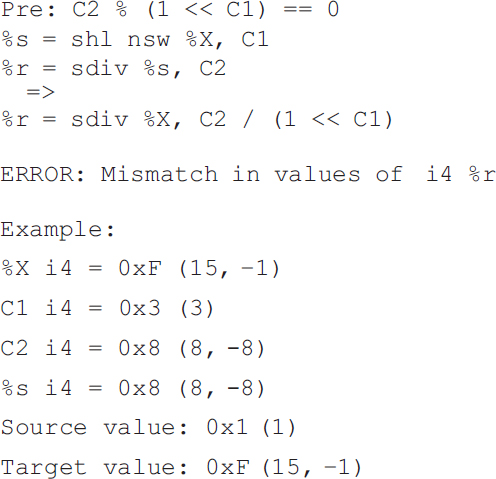 Typically, an instruction's result is encoded by applying the corresponding bitvector operation to the encoding of its arguments. Its definedness and poison-free conditions are the conjunction of the definedness and poison-free conditions, respectively, of its arguments along with any specific requirements for that instruction.

For example, consider the instruction udiv exact %a, %b, which is encoded as follows,

where ÷u is unsigned bitvector division. The unsigned division requires the second argument to be non-zero, and the exact attribute requires %a to be divisible by %b.

Encoding undefvalues. Undefvalues represent sets of possible values. The VC Gen encodes them as fresh SMT variables, which are collected in a set

AWS Is Too Big to Fail