Home/Magazine Archive/November 2018 (Vol. 61, No. 11)/Using Any Surface to Realize a New Paradigm for Wireless.../Full Text
Viewpoint

Using Any Surface to Realize a New Paradigm for Wireless Communications

Wireless communications have undeniably shaped our everyday lives. We expect ubiquitous connectivity to the Internet, with increasing demands for higher data rates and low lag everywhere: at work, at home, on the road, even with massive crowds of Internet users around us. Despite impressive breakthroughs in almost every part of our wireless devices—from antennas and hardware to operating software—this demand is getting increasingly challenging to address. The large scale of research efforts and investment in the fifth generation (5G) of wireless communications reflects the enormity of the challenge.1 A valuable and seemingly unnoticed resource could be exploited to meet this goal.

A common denominator in related research efforts is that the wireless environment—the set of physical objects that stand between two wireless communicating devices—remains a passive spectator in the data-exchange process. The ensuing effects on the data communication quality are generally degenerative: First, a transmitting device emits electromagnetic energy—carrying encoded information—which dissipates astoundingly fast within the environment. This path-loss phenomenon can be envisioned as distributing the same power over an ever-growing sphere. The power of the intended signal quickly diminishes, making its reception progressively more difficult. Second, as this ever-growing sphere reaches objects, such as walls, doors, desks, and humans, it scatters uncontrollably in multiple directions. This creates the multipath phenomenon where many, unsynchronized echoes of the original signal reach the receiver at the same time, making it difficult to discern the original. Third, the scattered signals naturally reach unintended recipients, increasing their noise levels (and allowing for eavesdropping). Finally, mobile wireless devices acquire a false perception of the frequency of electromagnetic waves, a phenomenon known as the Doppler effect. Notice that the hunt for higher data rates in 5G pushes for very high communication frequencies, at 60GHz for example, where the described effects become extremely acute.1

This Viewpoint introduces an approach that could tame and control these effects, producing a wireless environment with software-defined electromagnetic behavior. We introduce the novel idea of HyperSurfaces, which are software-controlled metamaterials embedded in any surface in the environment.6 In simpler terms, HyperSurfaces are materials that interact with electromagnetic waves in a fully software-defined fashion, even unnaturally.2,7 Coating walls, doors, furniture, and other objects with HyperSurfaces constitutes the overall behavior of an indoor or outdoor wireless programmable environment. Thus, the electromagnetic behavior of the environment as a whole can become deterministic, controlled, and tailored to the needs of mobile devices within it. The same principle is also applicable to outdoor settings, by exemplary coating poles or building façades.

The concept of programmable wireless environments can impact wireless communications immensely, by mitigating—and even negating—path loss, multipath, and interference effects. This can translate to substantial gains in communication quality, communication distance, and battery savings of mobile devices, and even in security and privacy. Furthermore, due to the underlying physics, HyperSurfaces have no restriction in terms of operating communication frequency, which can extend up to the terahertz (THz) band.10 This attractive trait makes HyperSurfaces potentially applicable to a variety of cutting-edge applications, such as 4G and 5G, Internet of Things (IoT), and device-to-device systems.

Consider an everyday communication scenario with multiple users within a physical environment, as shown in Figure 1. The common, non-programmable environment is oblivious to the user presence and their communication needs. The electromagnetic energy simply dissipates throughout the space uncontrollably, attenuating very quickly, causing interference among devices and allowing for eavesdropping. 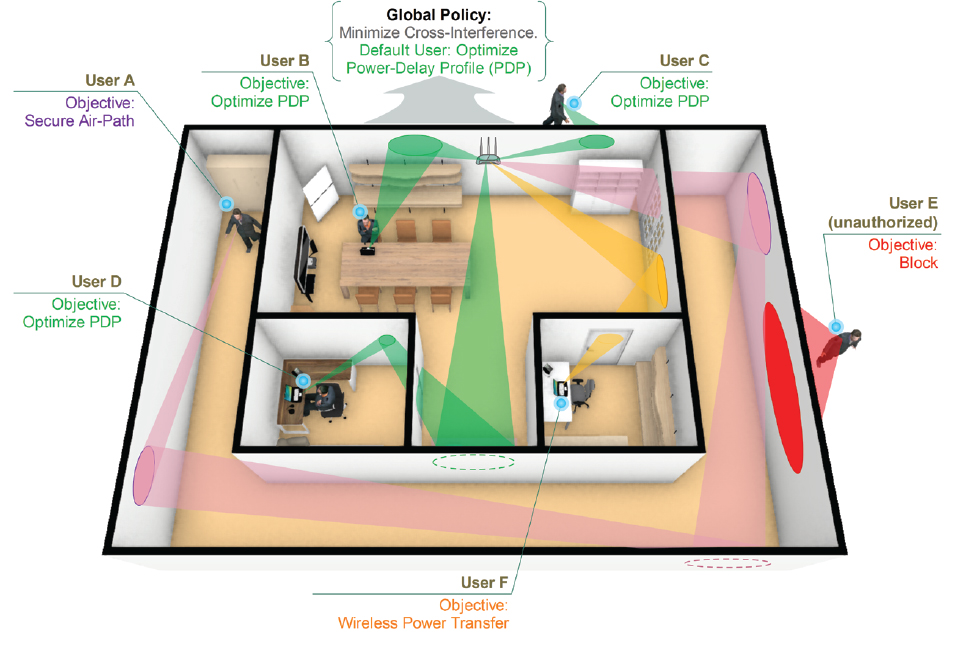 In the unique programmable environments, HyperSurface-coated walls and objects become connected to the Internet of Things. As such, they can receive software commands and change their interaction with electromagnetic waves, serving the user needs in unprecedented ways. In the example shown in Figure 1, user A expresses a need for security against eavesdropping. The programmable environment, in collaboration with the user devices, sets an improbable "air-path" that avoids all other users, hindering eavesdropping. Users B, C, and D express no requirement, and are automatically treated by a global environment policy instead, which dictates the optimization of their data transfer rates. This can be attained by negating cross-interference and a minute crafting of the received power delay profile (PDP)—that is, ensuring all received wave echoes get constructively superposed at the devices. User F is observed to be inactive and—according to his preferences—has his device remotely charged by receiving a very focused energy beam. Finally, user E fails to pass the network's access policies (for example, unauthorized physical device address), and is blocked by the environment. This can be accomplished by absorbing his emissions, potentially using the harvested energy for constructive use.

From another innovative aspect, the programmable environment concept abstracts the underlying physics of wireless propagation, exposing a software programming interface to control it instead. Thus, the physics behind wireless propagation are brought into the realm of software developers, treating the electromagnetic behavior of objects with simple commands, as shown in Figure 2. 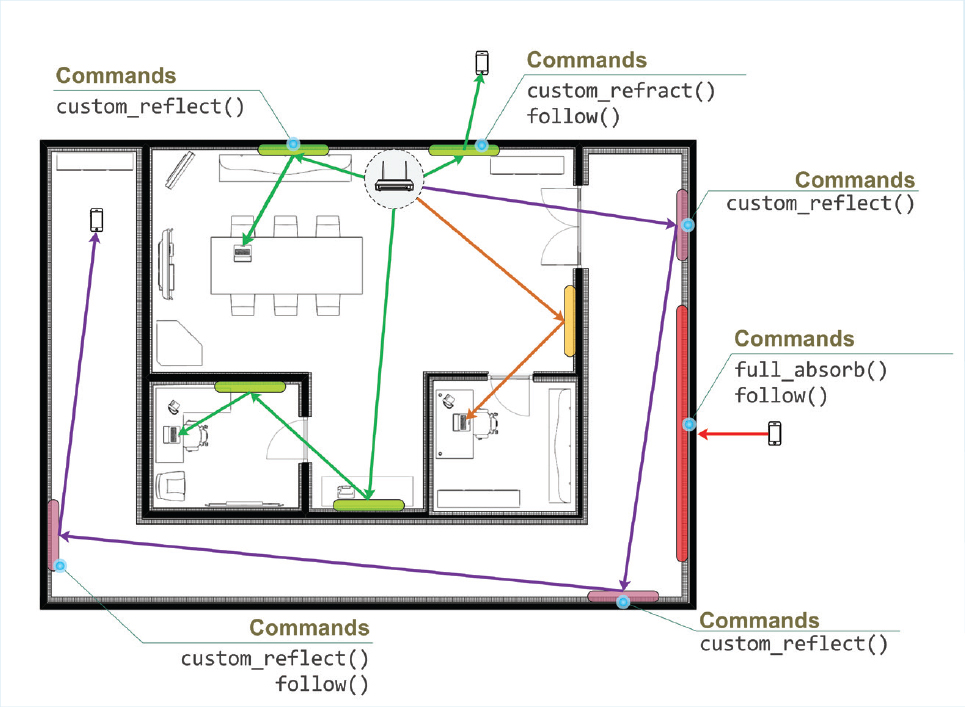 Figure 2. Software commands are combined and applied locally on walls to achieve the objectives of Figure 1.

Essentially, the HyperSurface-coated objects are treated as "routers," which can forward or block electromagnetic waves in a manner very similar to the concept of routers and firewalls in wired networks. Connecting devices becomes a problem of finding a route connecting HyperSurfaces, subject to performance requirements and useraccess policies.

The main components that comprise a single HyperSurface tile and imbue it with control over wave propagation are shown in the right inset of Figure 3. Dynamic metasurfaces are the core technology for introducing programmable wireless environments. They constitute the outcome of a research direction in physics interested in creating materials with engineered electromagnetic properties. Most commonly, they comprise a metallic pattern, called meta-atom, periodically repeated over a dielectric substrate, and connected via switching elements.5 The macroscopic electromagnetic interaction of a metasurface is fully defined by the form of the meta-atoms and the state of the switches. A certain state of switches may correspond to full absorption of all impinging waves from a given direction of arrival, while another may fully reflect them at an unnatural, completely custom angle.2

Figure 3. The proposed workflow involving HyperSurface-tile-coated environmental objects. The wireless propagation is tailored to the needs of the communication link under optimization. Unnatural propagation, such as lens-like focus and negative reflection angles, can be employed to mitigate path loss and multipath phenomena, especially in challenging non-line-of-sight cases. The main tile components are shown to the right in the figure.

The translation of switch states to interaction types is performed by a novel software class: the electromagnetic compiler. The compiler is implemented by HyperSurface manufacturers and is transparently used by developers. In its simplest form, the compiler can be seen as a lookup table that keeps the best switch configurations corresponding to a set of electromagnetic interactions of interest. This table is populated by manufacturers, using well-known heuristic and analytical techniques in physics.2,3

Upon each tile there exists an IoT device that acts as its gateway. It exerts control over the HyperSurface switches, and allows for data exchange using common communication protocols (see Figure 4). Using these protocols, the tiles—and, thus, the coated objects—become connected to common networking equipment. Gateways of tiles upon continuous objects, such as walls, form a wired network to facilitate power supply and the dissemination of software commands. A selected tile acts as the object's "representative," connecting to the external world. 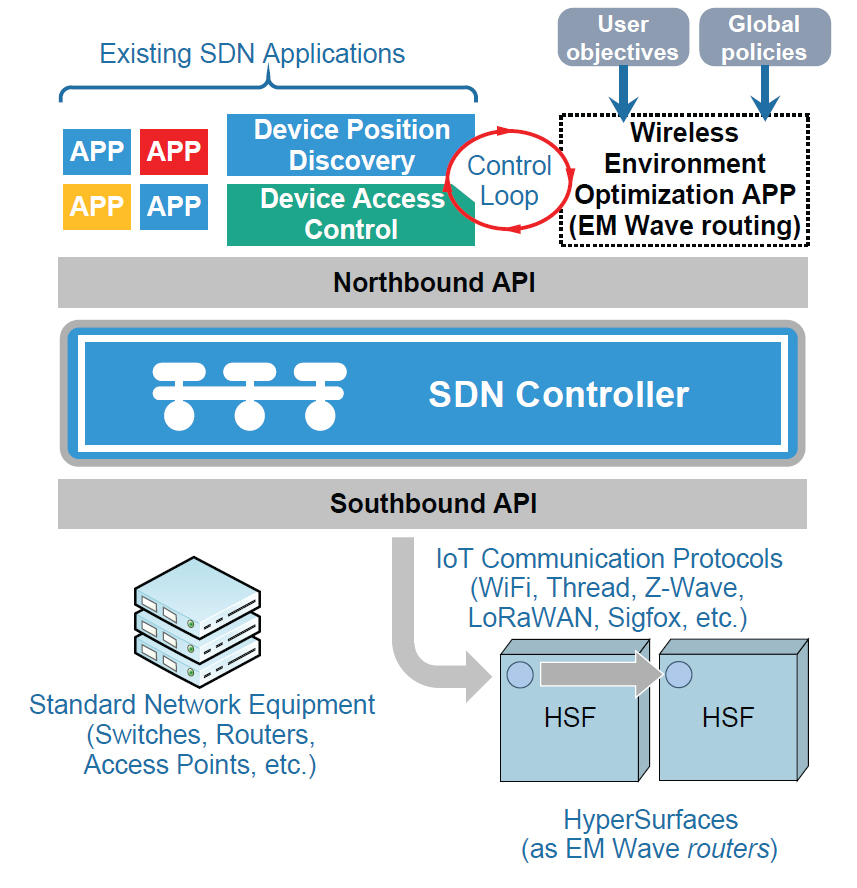 Figure 4 illustrates the integration of the programmable wireless environment to common network infrastructure using the software-defined networking (SDN) paradigm.1 SDN has gained significant momentum due to the clear separation it enforces between the network control logic and the underlying hardware. An SDN controller abstracts the hardware specifics ("southbound" direction) and presents a uniform programming interface ("northbound") that allows the modeling of network functions as applications. In this paradigm, HyperSurface tiles are treated as wave "routers," while the commands to serve a set of users, for example, as in Figure 2, are produced by a wireless environment control application. The application takes as input the user requirements and the global policies and calculates the fitting air paths. A control loop is established with existing device position discovery and access control applications, constantly adapting to environmental changes.

The scalability of the novel programmable wireless environments is a priority, both in software and hardware. In terms of software, the additional overhead comes from the optimization service, as shown in Figure 4. As described, however, the optimization pertains to finding objective-compliant paths within the graph of tiles, which is a well-studied and tractable problem in classic networking. In terms of hardware, the IoT gateway approach promotes miniaturization, low manufacturing cost, and minimal energy consumption of electronics, favoring massive tile deployments to cover an environment. Moreover, the choice of metasurfaces as the means for exerting electromagnetic control has distinct scalability and functionality benefits over alternatives. Metasurfaces comprise thin metallic elements and simple two-state switches, facilitating their manufacturing using large-area electronics methods (LAE) for ultra-low production cost.9 LAE can be manufactured using conductive ink-based printing methods on flexible and transparent polymer films, incorporating simple digital switches such as polymer diodes.9 On the other hand, alternatives such as antenna arrays8 require transceivers with accurate state control and real-time signal-processing capabilities, posing scalability considerations in terms of size, power, and manufacturing cost.

Despite their simpler design, meta-surfaces constitute the state of the art in range of wave interaction types, and with unique granularity. Advanced frequency filtering, polarization control, and arbitrary radiation-pattern-shaping functions can be potentially used for remodulating or "repairing" waves in the course of their propagation. Even in simple wave routing and absorbing functions, metasurfaces provide a degree of direction control so granular that it has been used for the formation of holograms.4 A high degree of control granularity is required for 5G ultra-high frequency communications, as discussed earlier in this Viewpoint. Moreover, novel dynamic metasurface designs employ graphene, offering operation at the range of terahertz.10

The design and implementation of HyperSurfaces is a highly interdisciplinary task involving physics, material sciences, electrical engineering, and informatics. The combined expertise of all these disciplines results in significant value: programmable wireless environments can be enabled for the first time, allowing for programmatic customization of the laws of electromagnetic propagation, to the benefit of wireless devices. Programmable environments provide a novel perspective for wireless communications, where the usual rigid channel models are replaced by a customizable software process. Apart from unprecedented capabilities in wireless systems, this new perspective can pave the way for a completely new class of software applications, with rich interactions with existing security, device position discovery, and user mobility prediction mechanisms in the SDN world.

Recently, a related project—VISORSURFa—was funded under the prestigious Future Emerging Technologies call of the European Union Horizon 2020 framework. VISORSURF underwent a highly selective review phase, with a 3% acceptance rate, and attracted a total budget of 5.7 million euros. The multidisciplinary team of researchers is developing the hardware and software for the HyperSurfaces, expects to have the first prototype within a year, and begin mass production soon afterward.

Christos Liaskos (cliaskos@ics.forth.gr) is a researcher at the Foundation of Research and Technology (Hellas), Greece.

Ageliki Tsioliaridou (atsiolia@ics.forth.gr) is a researcher at the Foundation of Research and Technology (Hellas), Greece.

Andreas Pitsillides (Andreas.Pitsillides@ucy.ac.cy) is a professor in the Department of Computer Science and the head of the Networks Research Laboratory at the University of Cyprus.

Sotiris Ioannidis (sotiris@ics.forth.gr) is a member of the staff at the Foundation of Research and Technology (Hellas), Greece

Ian Akyildiz (ian@ece.gatech.edu) is the Ken Byers Distinguished Chair Professor in the School of Electrical and Computer Engineering at the Georgia Institute of Technology in Atlanta, GA, USA, and member of the staff at the University of Cyrus.

a. A hypervisor for metasurface functions; http://visorsurf.edu

This work was funded by the EU H2020 FETOPEN-RIA project VISORSURF: A Hardware Platform for Software-driven Functional Metasurfaces (GA 736876).