Is the Pandemic Affecting Science and Engineering Undergraduate Students?

Each year, during the fifth week of the Winter semester, a survey is distributed to all Technion undergraduate students (about 10,000 students) . The purpose of the survey is to let the students' voices and perspectives about their learning experience at the Technion be heard, and to take relevant actions according to the survey findings. This year (2020-2021), a new set of questions was added to the survey that addressed the learning taking place at the Technion during the Corona pandemic. The purpose of these questions was to discover what is bothering the students during this special time and to address these issues as part of the Technion's proactive approach and activities for coping with the pandemic and with the need to transition to on-line learning. This survey will be referred to in what follows as "the 5th-week survey."

Two of the questions in this survey address students' concerns regarding six factors, which were grouped into on-campus factors (specifically, end-of-semester exams, students' social lives, and the extension of the duration of their studies) and off-campus factors (specifically, students' financial situations, the future of the labor market, and what the world will look like in the future).

Table 1: Number of students who answered the 5th-week survey and percentage of their relevant cohort, Winter 2020-2021

The picture that emerged with respect to four of the factors—the students' social life, the extension of the duration of their studies, the future of the labor market, and what the world will look like in the future—was understandable and consistent. For the remaining two factors—end-of-semester exams and the students' financial situation—a different and surprising picture emerged. Specifically, while for the first four factors, students' concerns were distributed more or less evenly among the three optional answers, and the majority estimated that most of their peers feel more or less like they do, the following picture emerged with respect to end-of-semester exams and their financial situation: Most students in all years of study were concerned about end-of-semester exams and estimated that their peers feel more or less the same. With respect to their financial situation, the majority of students in all years of study were not concerned, but estimated that their peers are more concerned than they are (see Tables 2A, 2B and Tables 3A and 3B, respectively).

Table 2B: Students' estimation of their peers' concern regarding end-of-semester exams

Table 3A: Students' concerns regarding their financial situation

Table 3B: Students' estimation of their peers' concern regarding their financial situation

Along with other questions included in the second survey, we used this opportunity to ask the students to explain the different picture that emerged from the first survey with respect to students' concern regarding the end-of-semester exams and their financial situation.

To understand the reason so many of the students were concerned about the end-of-semester exams, the follow-up survey included a question in which a list of factors was presented and students were requested to indicate whether or not they were explanatory factors for these concerns. The question was: "Students' answers to the question: "What are the students concerned about at this time?", presented in the previous survey, revealed that one of the factors that students were significantly concerned about is end-of-semester exams. For each of the following explanations, please indicate whether you think it can explain these concerns." The six explanations presented were: The Corona period, on-line exams, the statement "Exams are always stressful," the student's study year, the student's faculty, and the statement "Exams at the Technion are always difficult." These explanations were elicited from students' answers to an open question included in the 5th-week survey, in which they were asked to explain their concerns. As can be seen, two explanations were directly connected to the pandemic (the Corona period and on-line exams), and the others were not.

Figure 1 presents the percentages of students who indicated each explanation as being (or not being) an explanatory factor for students' concerns about end-of-semester exams. As can be seen, two explanations that are not directly related to the pandemic ("Exams are always stressful" and " Exams at the Technion are always difficult") were rated the same as the two pandemic-related explanations. 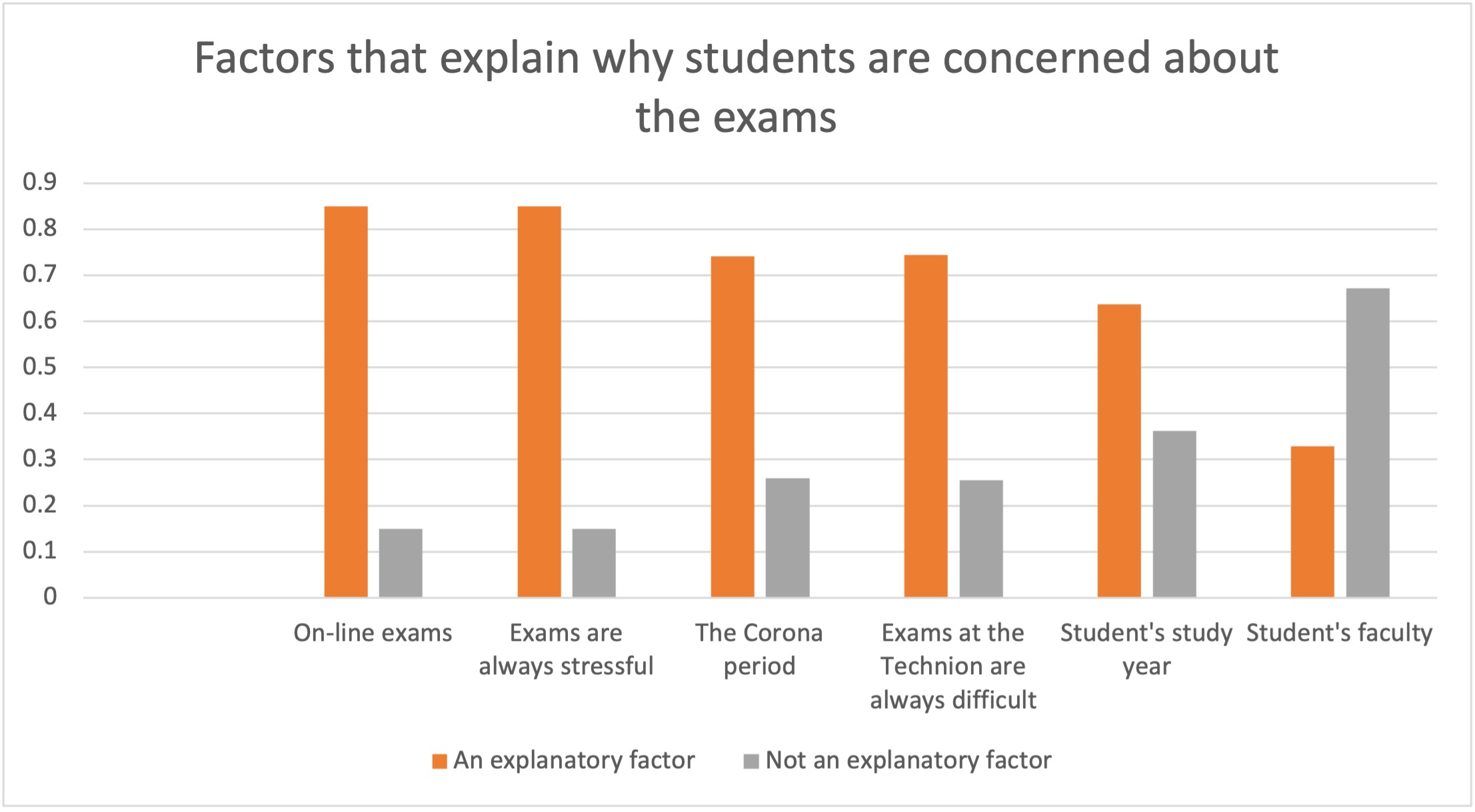 The students' answers to the open question in which they were asked to explain their perspective on the explanatory factors reveal that the exams themselves are the main source of concern, to which the on-line format of exams merely adds additional concern. This combination of reasons has, however, wider implications since it alludes to an important challenge of distance learning in general, which the Corona period only highlights.

To understand this result, we included the following question in the second survey: "In response to the question 'At this time, what concerns the students?', it was found that most students are not concerned by their financial situation, but they assume that their peers are more concerned than they are by their own financial situation. How can you explain this phenomenon?"

We were surprised by the students' answers. We assumed that they would explain this phenomenon using what could be interpreted as projection. Projection is a self-defense mechanism exhibited when a person does not want to admit something about his or herself (usually a trait or a feeling). In other words, we assumed that the students would say that the students would not admit (in the 5th-week survey) they are concerned by their financial situation, and therefore project their own concerns about their financial situations onto their peers.

The picture that emerged was, however, different. Table 4 presents the most frequent explanations students gave for this phenomenon (93 out of 119 answers). As can be seen, most of the students not only thought that the students are not concerned by their own financial situation, but they do not even know of a peer with a financial problem. They just assume that their peers are concerned by their financial situation, following reports in the media about financial difficulties. Only six students explained this phenomenon using what could be interpreted as projection.

Table 4: Students' explanations of students' estimation of their peers' concern about their financial situation