Standing on the Shoulders of Giants

In the months leading up to the Golden 50th SIGCSE Technical Symposium in Minneapolis, the ACM SIGCSE community nominated their favorite papers, voted on the top 20, and then top 10 best papers. The 10 top papers were finally officially announced and recognized in an article by ACM and at the SIGCSE 2019 convening in Minneapolis.

The best paper nominees created a healthy buzz on social media through the voting process, as have the awarded papers ever since the Top 10 best papers were announced.

In the days leading up to the meetings, presentations, and celebrations that spanned Feb. 27 to Mar. 2, 2019 in freezing cold Minneapolis, SIGCSE_TS, SIGCSE's official twitter account also shared some interesting statistics on the top SIGCSE authors and institutions in the ACM Digital Library—the archive of the ACM SIGCSE. I have captured these top 10 lists along with the 10 best papers in the image below: 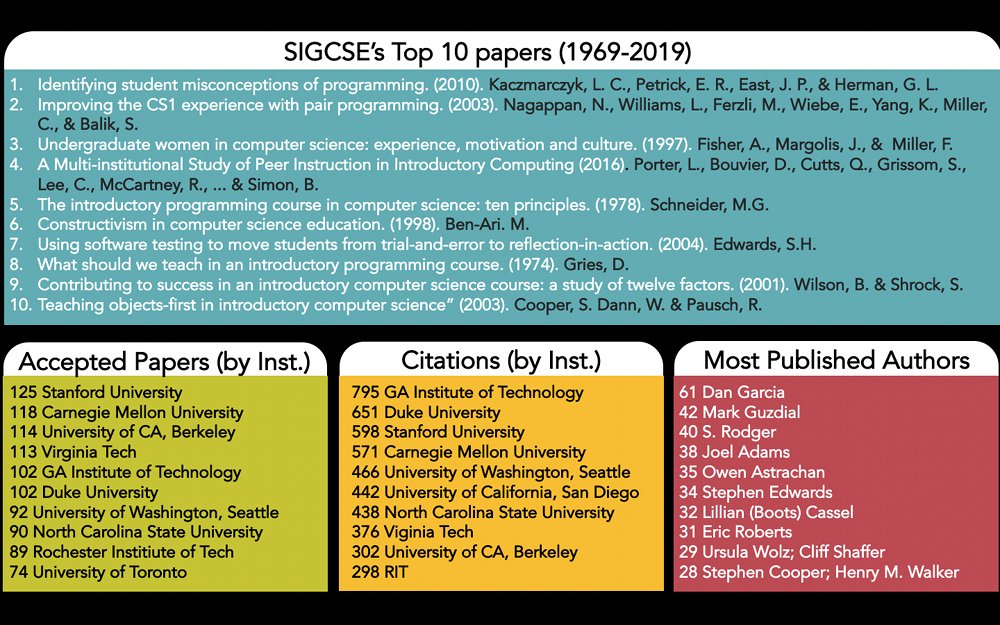 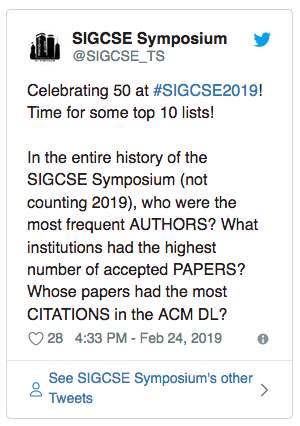 The top 10 papers and these top 10 lists convey interesting messages and tell us a story about a 50-year-young & fast-growing community passionately pursuing computer science education as researchers and/or practitioners.

As someone who probably read her first CS education research paper about 10 years ago, and has actively published to SIGCSE only in the last 7 years, I am relatively new to this community. I find these Top 10 lists informative. Here are my own Top 10 Takeaways (although some might qualify as simply random observations :-)). Although we do not know who all voted, my guess is that they likely represented the group currently active in SIGCSE. We have likely lost many old-timers from the 70s and 80s, so the current active SIGCSE comprises  scholars who likely became active in CS education starting in the late 80s-90s i.e. three decades. As the sub-heading in the awards announcement suggests, these papers share research that has shaped the field of CS education.

To my mind, the field of CS, not just CS education, owes a debt of gratitude to these researchers and their research. I believe here are some questions worth pondering over. 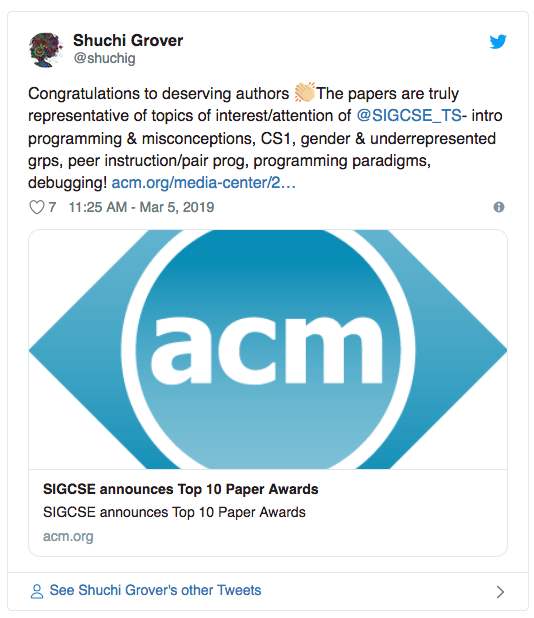 As I mentioned in my own tweet sharing ACM's best paper awards announcement, the top 10 papers are truly representative of enduring topics that have sustained the interest and focus of attention of the community at least in these last 3 decades: introductory programming/CS1 (what/how to teach, misconceptions, debugging), underrepresentation in CS (gender, ethnic, other), student-centered pedagogies like peer instruction and pair programming, and programming paradigms. I highly recommend these 10 best (and in fact the other 10 in the top 20 list too) as required reading to anyone in CS education, but especially to those doing their PhD research in CSE. While all the top 10 papers are absolutely brilliant in my view, I discuss two papers in more detail (probably because I think they have directly impacted K-12 CS education more than the other eight award winners). The Top 10 Authors and Institutions

My key takeaways/random observations on the top 10 institutions and authors for SIGCSE papers (in no particular order of relevance).

I'd love to hear others' reactions to the lists. I will probably dedicate a different post to discussing just the best papers, and yet another one to look back at my dozen or so contributions to SIGCSE in these last few years.

Shuchi Grover is a computer scientist and learning sciences researcher based in Palo Alto, CA. She is currently a Senior Research Scientist at Looking Glass Ventures and Visiting Scholar at Stanford University. Her doctoral work at Stanford University and subsequent research has focused on K-12 computer science education, and especially computational thinking in CS and STEM+Computing integration settings at the primary and secondary school levels.

Why Is It Hard to Define Data Science?