Home/Opinion/Articles/Pay What You Want as a Pricing Model For Open Access.../Full Text
Viewpoint

Pay What You Want as a Pricing Model For Open Access Publishing?

The open access publishing movement has received strong support from scientists, lawmakers, and funding institutions. Many publishers are reacting to this demand by offering open access journals.7 However, there is an ongoing debate on how open access publishing models should be financed.2,4 Most open access journals that rely on the so-called "gold open access model"8which makes the research output immediately available from the publisherlet authors of accepted papers pay article processing charges (APCs) of several hundred to several thousand U.S. dollars.1 However, APCs are often criticized for potentially excluding researchers with limited funds.3

As one potential solution to this problem and also to gain a better understanding of the role of APCs in the scientific community, some publishers are starting to use Pay What You Want (PWYW) as a pricing model for gold open access publishing. PWYW is a pricing model where sellers delegate the full pricing power to buyers. So far, PWYW has mainly been applied in service industries (for example, restaurants, theaters), but also for the sale of digital products like software (such as http://humblebundle.com). More recently, several publishers of open access journals like Cogent OA (belonging to the Taylor & Francis Group), edp Sciences, and Thieme Publishers have started to experiment with the PWYW model for APCs of open access journals. More specifically, Cogent OA empowers authors to decide how much they want to pay for their open access publication in 15 broad journals covering different domains of academic research. Likewise, SICOT-J (edp sciences), a multidisciplinary journal covering the fields of surgery and engineering, and The Surgery Journal (Thieme Publishers), an open access journal for surgeons and trainee surgeons of all disciplines, have started to delegate pricing power to their contributing authors.

Although neoclassical economic theory predicts that buyers (that is, authors in OA publishing) pay nothing if they are not forced to do so, empirical research on PWYW consistently finds that many buyers pay positive prices, often exceeding the marginal costs of the product (for example, Gneezy et al5). In the case of open access publishing, authors may be willing to voluntarily pay APCs for reasons of fairness and reciprocitybecause they want to compensate the publisher for his costs or to reciprocate his generosity, as well as for strategic considerations, that is, because authors understand the journal will not be sustainable if the production costs are not covered.9 Furthermore, with their payment authors may signal to others (and potentially to themselves) the value they attach to their publication.6 At the same time, authors with limited funds are not excluded from publishing because they can adjust their PWYW payments to their available means.

For publishers, PWYW achieves endogenous price discrimination and higher market penetration because no author is excluded by APCs that he cannot afford. This can be especially important for the introduction of a new scientific journal. Furthermore, PWYW can initiate a debate about funding and affordability of APCs and might increase the acceptance of open access APCs in the scientific community. The obvious risk, however, is free riding of authors who do have the funds to pay for APCs but choose to pay nothing or only very little. A more specific concern in the context of open access is that some authors may be fundamentally convinced that research articles should be "free" to both readers and authors instead of just "open" and for this reason refuse a voluntary payment.

With their payment authors may signal to others (and potentially to themselves) the value they attach to their publication.

Some insights on the performance of PWYW for open access APCs at the individual level are provided by initial data from the peer-reviewed journal The Surgery Journal launched by Thieme Publishers in June of 2015 that exclusively uses PWYW pricing. At this peer-reviewed journal, authors are prompted after acceptance of their article to state the APCs.

After an article is accepted authors are directed randomly to one of two possible forms (that is, experimental conditions) to make their PWYW payments. On both forms, all authors are informed about the recommended "regular price" of the publication fee of $1,600. On one form they have to state their PWYW payment directly. On the other form they have to specify a discount from the regular price (a 100% discount was possible).10

So far, authors of 27 papers made their payment decisions with a mean payment of $480 across conditions. Only four (15%) authors paid zero, and eight (30%) authors paid less than $100. Two authors paid the recommended "regular price" for the publication fee of $1,600 and one author even paid 50% more than the recommendation ($2,200). Altogether, five (19%) authors paid $1,000 or more. In the condition where authors had to specify their discount from the recommended publication fee, mean payments are substantially higher ($616 vs. $333; see the accompanying figure for the distribution of PWYW payments according to payment form). However, the standard deviation of the payment amounts is high ($588.7), which might be attributed to heterogeneity in social preferences, available funds as well as cultural norms. The 27 publications came from a total of 12 different countries, which differ in terms of development. 11 publications came from developing countries, 16 from developed countries (thereof six from the U.S.). Payments from developed countries (M = $728.9, SD = $654.4) were significantly higher than those from developing countries (M = $118.2, SD = $124.6) at the 1%-level using a Mann-Whitney U test. These findings are directionally consistent with preliminary and aggregated findings provided by Cogent OA. They report that 55% of authors decided to pay something and some authors are paying even more than the recommended APC (http://bit.ly/2wM5X8l). 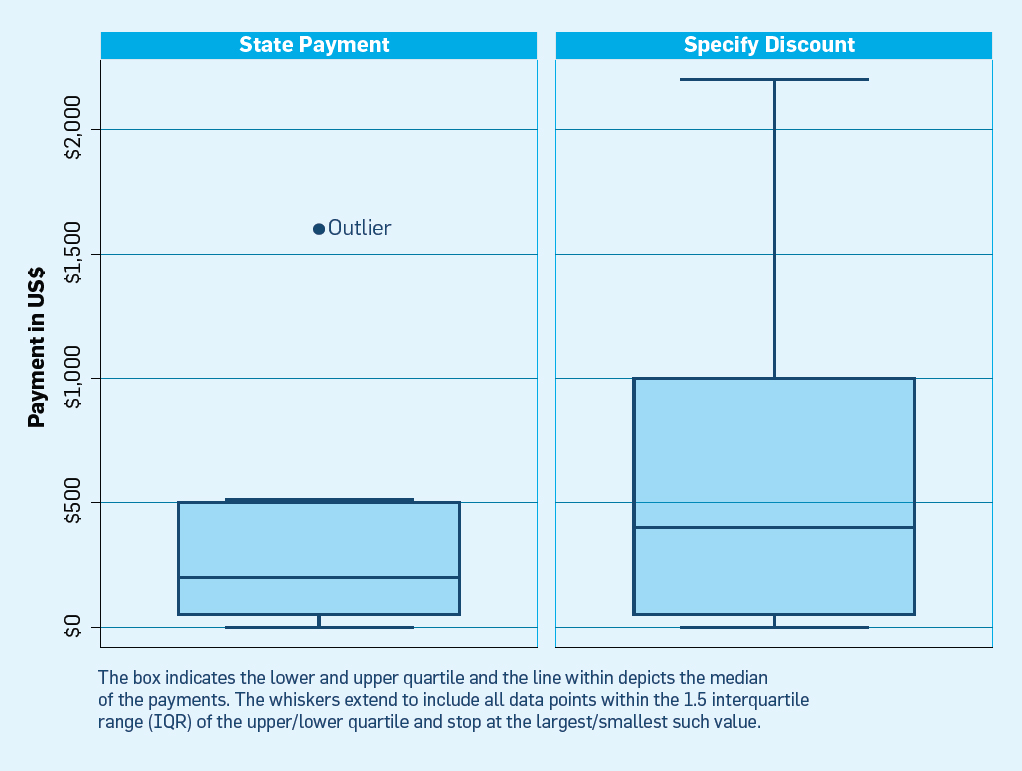 Figure. Distribution of PWYW payments according to payment form.

Although these constitute early empirical results and the sample size is limited, we can derive a few implications. The observed payments from our experiment together with the preliminary results from other experiments (that is, Cogent OA) indicate that PWYW may work in the context of open access publishing. The results suggest that a substantial fraction of authors do pay APCs voluntarily, in some cases even more than regularly asked. From discussions with the publisher, we learned the submissions exceeded their expectations compared to similar new open access journal introductions in this field. Also, the share of about 40% of publications from developing countries where authors might otherwise not be able to pay the regular APCs can be regarded as rather high. It must be noted that many publishers have introduced schemes that give authors a significant discount or the option to completely waive APCs if the authors cannot afford them. However, such arrangements often require the disclosure of the financial situation of the authors that can be uncomfortable for them. In contrast, the advantage of PWYW is that it allows authors to pay a reduced amount and thus allows them to save their face as part of the regular publication and payment process.

For publishers, using the PWYW pricing model can be a strategy to attract even more scientists to open access publishing.

Clearly, PWYW is credible only if the journal takes the acceptance decision first and only then asks the authors how much they are willing to pay for the publication. One important aspect that will influence the sustainability of this pricing model for scientific publications is whether funding bodies such as the NSF permit authors to make positive payments voluntarily (within reasonable limits) despite the common requirement to use funds economically.

We believe the high motivation of scientific authors to achieve a wide dissemination of their work and an interest to support and help sustain the journal that publishes their research facilitate the applicability of PWYW in open access publishing. For publishers, using the PWYW pricing model can be a strategy to attract even more scientists to open access publishing and to raise the visibility and the positive perception of their journals.

However, there are some points that we cannot address in our study. First, it is unclear to what extent the payments we have seen in The Surgery Journal depend on the journal's field (for example, medicine). It is likely that financial resources vary across different scientific disciplines and thus affect voluntarily paid APCs. Consequently, the PWYW model may be better suited for some publications and fields than for others. In this regard we would like to refer to the experiment at Cogent OA, where the comparison of payments across the 15 journals can allow for cautious conclusions in this direction. In general, we believe we need more experiments on PWYW as a pricing model for open access publishing and our contribution can be seen as a starting point in this direction.

Martin Spann (spann@bwl.lmu.de) is a Professor at the Institute of Electronic Commerce and Digital Markets, LMU Munich, Germany.

Lucas Stich (stich@lmu.de) is an Assistant Professor at the Institute of Electronic Commerce and Digital Markets, LMU Munich, Germany.

Klaus M. Schmidt (klaus.schmidt@lmu.de) is a Professor at the Department of Economics, LMU Munich, Germany.

The authors gratefully acknowledge data provision from Thieme Publishers and financial support by the German Science Foundation (grants SCHM 1196/5-1 and SP 702/2-1, and CRC TRR 190) and are also grateful for many helpful comments from the European Commission Workshop on "Alternative Open Access Publishing Models" in Brussels on Oct. 12, 2015 and the Open Access Days 2016 in Munich. There are no financial interests of the authors involved.