The history of computing is filled with mythical figures, but often lost in the shuffle is the accomplishment of John Mauchly and J. Presper Eckert, Jr. On February 14, 1946, the pair publicly unveiled the world's first true computer: ENIAC (Electronic Numerical Integrator and Computer). From their lab at the University of Pennsylvania in Philadelphia, they launched a revolution that truly changed the world.

On its 75th anniversary, ENIAC is once again in the spotlight. "It was the big bang of the information age. It set in motion a paradigm that has become the underpinning of daily life, as well as of deepest science," observes Bill Mauchly, an inventor and software architect who, as the son of John Mauchly, has also become a historian for the computer. 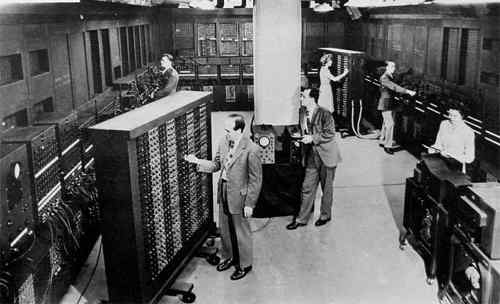 "ENIAC was the first digital programmable computer. It demonstrated what was possible," adds Thomas Haigh, professor of history at the University of Wisconsin, Milwaukee, and co-author of ENIAC in Action: Making and Remaking the Modern Computer (MIT Press).

ENIAC, built at a then-astounding cost of $487,000, used 10 position ring counters to store digits. Each digit required 28 vacuum tubes that counted pulses on the ring counters to perform arithmetic. "Because it was electronic, it was thousands of times faster than anything that came before it," Haigh explains. "The machine would complete its work in a flash and spend most of its time waiting for human intervention."

The computer supported 200 decimal digits of writeable electronic memory spread across 20 "accumulators." It was a then-revolutionary development. ENIAC added by transmitting ten-digit numbers directly between accumulators, incrementing the contents of the destination counters. An "add time" was 200 microseconds. The accumulators worked in parallel, allowing up to 50,000 additions per second. A 10-digit by 10-digit multiplication required 14 add times, or a total of approximately 2,800 microseconds. A division or square root problem required 143 add times, or 28,600 microseconds.

To be sure, ENIAC was notable for more than simply being the world's first fully electronic computer. It was incredibly consequential. From the day it was introduced to the public via a front-page story in The New York Times to its retirement nearly a decade later, it tackled an array of real-world tasks including ballistics trajectory research, Monte Carlo simulations, weather predictions, and early hydrogen bomb research conducted by John von Neumann and others.

"Although the architecture and programming style were very idiosyncratic and not copied by any later machine, the ENIAC project built a foundation for more advanced computing models," says Mark Priestley, a research fellow at the U.K.'s National Museum of Computing and co-author of ENIAC in Action. This included the EDVAC (Electronic Discrete Variable Automatic Computer) design that, among other advances, introduced binary rather than decimal computing, and modern programming techniques.

While the likes of Charles Babbage and Alan Turing introduced the mathematical foundations that became modern computing, their work was entirely theoretical. It was not until Mauchly and Eckert launched the ENIAC project in the early 1940s that the concept of a computing machine began to take shape.

John Mauchly, trained as a scientist and with previous experience building calculating machines, brought a big-picture vision to the project. "He had an intense curiosity and collected all kinds of ideas. While he didn't know, until he and Eckert had worked everything out, exactly how the computer would work, he had done his homework," Bill Mauchly says. "He knew what was out there, how systems worked, and how and why things failed. He had a vision that an electronic computer could exist, and it should exist."

Eckert, on the other hand, was extremely adept with electronics and known for his attention to detail. "He was a meticulous and careful engineer who knew how to solve problems," Haigh says. "It was previously believed that any device with that many vacuum tubes would fail so often that the machine would be useless. However, the two came together at the University of Pennsylvania at the right place and at the right time."

On June 5, 1943, the U.S. Amy's Ballistics Research Laboratory (BRL) contracted with the pair to build ENIAC at the university's Moore School of Engineering. It was a classified effort codenamed Project PX. There were no off-the-shelf electrical components to build the computer; everything had to be constructed from the wires and tubes up. Haigh says, "A team made up primarily of women, with job titles such as 'assembler' and 'wireman', soldered together all the resistors, capacitors, vacuum tubes, and other components, and wired everything together."

The proximity to the nearby electronics industry—companies like RCA, Philco, Sylvania, and Bell Laboratories were located in nearby New Jersey and New York—meant access to the local expertise needed to build the systems required for ENIAC. However, the project faced steep challenges because as World War II dragged on, obtaining custom power supplies and electrical subcomponents proved difficult. Companies like General Electric were so backlogged with military orders, it was nearly impossible to obtain the electronics for ENIAC.

Yet the team succeeded. According to the original article in The New York Times, ENIAC required more than 200,000 person-hours to build. Workers soldered approximately half a million joints en route to the final modular design, which measured 50 feet by 30 feet (with 40 nine-foot-high panels). The computer contained 18,000 vacuum tubes, 70,000 resisters, 10,000 capacitors, 6,000 switches, and 1,500 mechanical relays on panels that performed specific functions. The project was completed in November 1945 and was later promoted as a "Magic Brain" and "Giant Brain" by magazines and newspapers.

Getting with the Program

One of the remarkable things about ENIAC is the women involved in the project. In addition to the team that assembled all the various components, six women—Jean Bartik, Betty Holberton, Kathleen Antonelli, Marlyn Meltzer, Ruth Teitelbaum, and Frances Spence—initially programmed the machine. Another, Adele Goldstine, worked as an operator and wrote the five-volume manual for ENIAC. Klara von Neumann, the wife of John von Neumann, helped train the women to program and check code for errors. 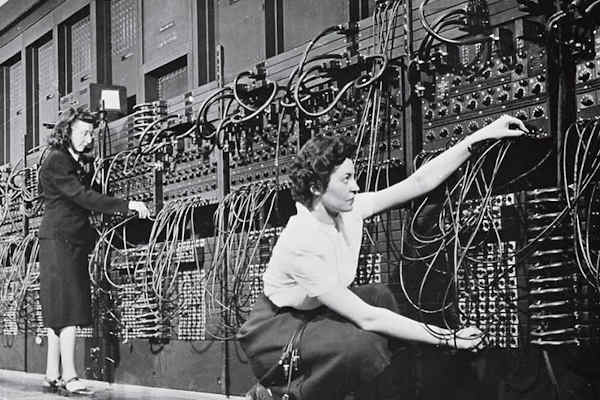 There are also relatively unknown aspects of ENIAC. For example, it introduced the idea of "personal computing," Priestley says. In 1946, mathematician Derrick Henry Lehmer used it over the July 4 weekend to do theoretic calculations supporting his research in pure mathematics. "Apparently, Lehmer and his family breezed in and, with a bit of help from Mauchly, set up the machine for a specific problem, and then ran it before the regular staff came back in after the holiday," Priestley explains.

The computer also introduced a different twist on the computer mouse. "ENIAC was so big that teams were worried about real mice running around inside it," Bill Mauchly explains. As a result, Eckert, who was "omnipresent in engineering decisions, kept a cage of hungry mice, and gave them a smorgasbord of different brands of bus wire with different kinds of insulation." The type of wire that was the least liked by the mice was the wire most often used to build the computer.

By 1948, the U.S. Army, with von Neumann's help, had settled on a particular configuration that transformed ENIAC into a software-fed CPU with a fixed instruction set. It was later used to generate the world's first computer-based weather forecasts.

ENIAC was decommissioned on October 2, 1955 and Mauchly and Eckert went on to start their own company, Eckert-Mauchly Computer Corporation, which was later sold and became part of what is now Unisys.

Mauchly foresaw a day when computers would be used for tasks as diverse as designing airplanes and studying the motion of planets. Today, portions of the original ENIAC computer are on display at the Smithsonian Institution in Washington, D.C., as well as the University of Michigan, the University of Pennsylvania's Moore School, and the Computer History Museum in Mountain View, CA.

In the 3rd picture, caption is given as below:

I suppose they were called as "Computers" and not "Operators" as stated.

I think either term is technically correct. My understanding is that the people doing this work were originally called computers but later operators.

Digital Eternity Is Just Around the Corner