The Global Positioning System (GPS) has become an indispensable part of modern life, the basis for everything from earthquake measurement to outdoor games to simple turn-by-turn driving directions. As developed by the U.S. Department of Defense, the satellite-based GPS system was intended to provide the precise location and navigation of military assets, especially submarines carrying nuclear missiles. To accurately aim their missiles, the submarines would have to be able to determine their locations within seconds after surfacing, and the network of GPS satellites ringing the globe made that possible.

Ironically, however, submarines also provide an example of one of the situations in which GPS does not work: they cannot receive a satellite signal when they are submerged. They have gyroscopic inertial guidance systems that can calculate their movements since the last GPS fix, but over a day or two that approach can deviate by as much as a mile.

Researchers at the U.K. Defense Science and Technology Laboratory are working on a "quantum accelerometer" or "quantum compass," so called because it is based on quantum physics and operations at the atomic level, that will allow a submarine to track its movements while submerged. The device, now in prototype and scheduled for land-based trials in September, will be able to calculate motion based on the effects of the Earth's gravitational field on extremely slow-moving atoms.

The idea for the quantum compass is based on work by Steven Chu, Claude Cohen-Tannoudji, and William D. Phillips that won the 1997 Nobel Prize in Physics. Those researchers found ways of using lasers to cool gases down to nearly absolute zero and hold them in place. It may sound odd to use a laser to cool a gas, but the approach leverages the momentum of the stream of photons that make up the laser beam. If the laser is tuned to the proper frequency (that is, if it is the right color), when one of its photons collides with an atom, it can transfer some of its momentum to the atom, slowing it down. After a short time, the slowed-down atom emits a new photon, but then it can absorb another, slowing it further. The effect has been dubbed "optical molasses" as a metaphor for the way the laser is essentially acting as a thick liquid through which the atoms are slowed as they make their way. The process also uses an auxiliary set of lasers to keep the cooled-down atoms within the target area. 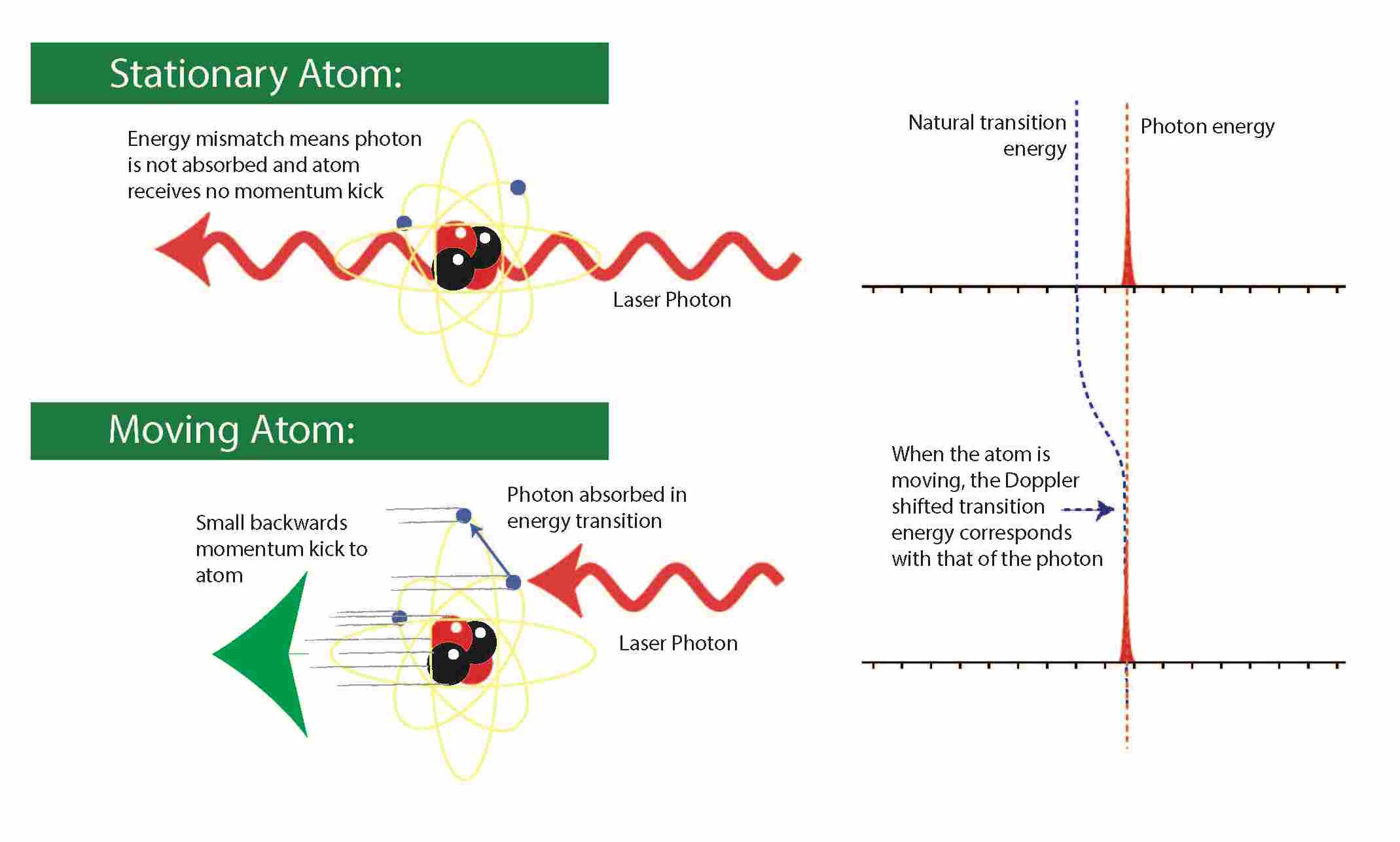 Once the atoms are slowed to virtual stillness, they become exquisitely sensitive to changes in the Earth's gravitational field. Another set of lasers can track the atoms' tiny perturbations in response to changes in gravity—or, in the case of the quantum compass, to changes in acceleration. If you put such a device aboard a submarine, you can keep track of its position with strikingly greater precision than current inertial guidance systems allow. According to spokespersons for the U.K. Defence Ministry, the improvement in positioning accuracy can be as much as 1,000-fold.

The quantum compass prototype is a meter-long box containing a single set of lasers that allow it to measure acceleration in one dimension. The final product will include two more sets of lasers, each of which cools and tracks a million rubidium atoms, to allow position tracking in three dimensions.

Getting the project operational requires more than just building a workable box, however. The device is so sensitive to gravitational fields that it will register any local fluctuation in gravity; for example, if a submarine passes by a large undersea mountain or other significant mass, the quantum compass’ lasers would read the effect of that object's gravity as an acceleration in the opposite direction. That sensitivity means the accelerometer will have to be used in conjunction with

Logan Kugler is a freelance technology writer based in Clearwater, FL. He has written for over 60 major publications.