The Outlook for Crypto

Some people see cryptocurrency as the future of money, promising high returns and independent of any government. Others see it as risky, enabling illegal activity and vulnerable to loss. One thing everyone agrees on, however, is that mining cryptocurrency takes a lot of energy.

Estimates vary, but experts believe bitcoin miners—the people who run computations in order to earn new bitcoins—are using approximately half of 1% of the world's energy output. Digiconomist, a website that tracks resources used, says Bitcoin, the world's largest cryptocurrency, was consuming almost 131 terawatt-hours (TWh) of electricity on an annualized basis as of late August, approximately the same amount as the entire country of Argentina. The second-largest cryptocurrency, Ethereum, was consuming 78TWh per year, comparable to the annual energy consumption of Chile. Dogecoin clocked in at a bit more than 3TWh, similar to Montenegro. That massive energy use leads to increased carbon emissions and contributes to climate change.

Those numbers may be changing, depending on how Ethereum's switch to a different method of allocating crypto coins pans out. In September 2022, Ethereum performed what it called the Merge, changing its preferred method of generating value from one called proof of work to the less-energy-intensive proof of stake, and cutting its electricity demand by an estimated 99%.

Cryptocurrency runs on a blockchain, a distributed database shared among an arbitrary number of computers. Each block contains a chunk of data, and once it has been created, each block is time-stamped and linked to the previous block, creating a chain of blocks that cannot be altered. Under the cryptocurrency system, people compete to find the solution to a cryptographic puzzle, and whoever finds the answer first gets to create the next block and is rewarded with a certain amount of cryptocurrency, a process known as "mining." By coming up with the solution, miners are proving they have done the computational work required to solve the puzzle.

This proof-of-work system created an incentive to increase use of computing resources. "People started figuring out, 'Well, if I could just run a faster computer, I could do this faster than the next guy, and then I could get more of the rewards of Bitcoin,'" explains Neha Nerula, director of the Digital Currency Initiative in the Massachusetts Institute of Technology's Media Lab. That led to people running more and more powerful processors, which of course increased energy consumption.

The market value of the cryptocoins also drives up use. "The higher the price, the more incentive there is to mine, because your rewards are higher."

The market value of the crypto-coins also drives up use. "The higher the price, the more incentive there is to mine, because your rewards are higher," Nerula says. "So we end up in the situation where the higher the price of these proof-of-work currencies, the more energy and hardware is going to be used to mine them."

Turning Down the Wattage

The Ethereum community, however, has decided to try a different protocol for distributed consensus: proof of stake. Users, known as "validators" rather than "miners," put up, or stake, a number of coins they already own. Each stake gets them the equivalent of a lottery ticket, and the holder of the winning ticket gets to create the next block and earn Ether, that system's crypto coinage. The switch to proof of stake cuts Ethereum's energy use by between 99% and 99.99%, says Alex de Vries, a data scientist working on his Ph.D. thesis on the sustainability of crypto at Vrije University Amsterdam, and founder of DIgiconomist, which provides economics-focused commentary on the consequences of digital trends. Under proof of work, Ethereum consumed half as much energy as Bitcoin, de Vries says.

Proof of work also leads to more electronic waste, de Vries says. Mining rigs, as the dedicated machines used to generate cryptocoins are called, run on application-specific integrated circuits (ASICs) optimized for that particular operation. As people get faster machines that increase their success rate, older, slower machines become useless to them. The ASICs cannot be repurposed, so all that equipment is junked, with a resulting impact on the environment.

A recently published paper from the Centre for Blockchain Technologies at the U.K.'s University College London examined the energy use of various proof-of-stake currencies—Algorand, Cardano, Polkadot, Tezos, and Hedera, along with Ethereum 2.0. "The difference in energy efficiency between different proof-of-stake cryptocurrencies really isn't that dramatic," observes Moritz Platt, a Ph.D. candidate in computer science at King's College London and lead author of the paper. "The dramatic difference is really between proof of work and proof of stake." In fact, Platt says, all the proof-of-stake currencies are comparable to the VisaNet electronic payments network in their power demands.

There are other distributed consensus mechanisms that might also be used to produce cryptocurrency. "There's been really a renaissance in distributed consensus protocols," Nerula says. For instance, Intel developed an algorithm called proof of elapsed time. It assigns a random period of sleep to each node in the blockchain network; the node that has the shortest wait time will wake up first and create the next block.

There is also proof of authority, which is based on the reputation of the validators. Validators essentially put up their identities as their stake, instead of coins. This removes anonymity from the system, though, which is not something most crypto-currency users want. Proof of space, also known as proof of storage, requires validators to answer random questions to prove that they are storing certain data on their hard drives. Nerula says that, while proof of space may not consume as much energy as proof of work, it might wind up using a lot of hardware, thus wasting resources in another way.

Other distributed consensus protocols that might be used to produce cryptocurrency include proof of elapsed time, proof of authority, and proof of space.

These other protocols also go against the original principles of cryptocurrency. They tend to be designed for centralized systems that require permission for access. The whole idea of cryptocurrency, Platt says, was that it be decentralized and permission-less. "There are probably hundreds of different consensus mechanisms out there," he says. "Of the ones that have proven success in the permissionless realm, it's really only the proof of stake and proof of work."

While there is a clear difference in energy consumption between the two approaches, some people question the long-term effect of Ethereum's move. "While I applaud Ethereum's effort, it's far from a game changer in terms of the overall environmental impact of cryptocurrency," says Arvind Narayanan, a professor of computer science in the Center for Technology Policy at Princeton University. "The majority of cryptocurrency energy consumption comes from Bitcoin, and Bitcoin will never switch to proof of stake," he says. "The main barrier is cultural: Bitcoin is fiercely against even tiny changes to the monetary policy."

Governments may have something to say on the matter, however. The Swedish government and the European Union's Parliament reportedly discussed a ban on proof of work in the spring of 2022, though a March vote that might have accomplished that failed. Sweden is home to only a small part of the Bitcoin network, de Vries says, but is often touted as an example of where to perform mining in a more environmentally friendly way, because the country uses hydropower. No national electrical grid relies solely on renewable energy, however, so a large increase in demand will necessarily mean more use of fossil fuels, de Vries says. "Sweden was actively wondering, 'can we use this energy for steel manufacturing, or can we produce random numbers that aren't really very useful and don't produce a lot of jobs compared to steel manufacturing?'," he says. Ethereum's successful migration to proof of stake could prompt the EU or other governments to revisit regulations about proof of work, de Vries believes. 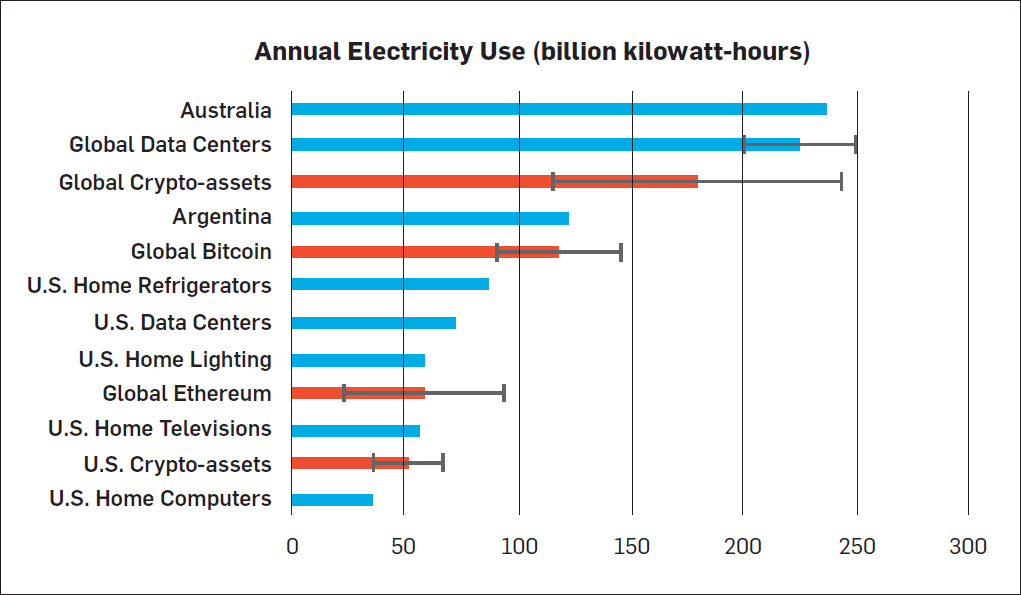 Figure. Comparison of annual electricity consumption and best estimates for crypto-assets as of August 2022, with error bars representing the best range of values. Source: Climate And Energy Implications of Crypto-Assets in the United States, WhiteHouse.gov, September 2022, https://bit.ly/3tv5WVY.

The New York State Senate passed a two-year moratorium on proof of work cryptocurrency mining in June 2022, but Governor Kathy Hochul said at the time she might not decide whether to sign it for several months. Bans may also prove ineffective. China banned Bitcoin in 2021, but miners just moved their operations to neighboring countries such as Kazakhstan, which have less renewable energy than China, increasing their overall carbon emissions by 17%, de Vries found.

Bans on proof of work could also have free speech implications, Nerula argues. "I think we have to be really careful about writing a regulation that restricts the software individuals are able to run on their computer," she says. "If I own an ASIC and I want to plug it in and I want to spend energy doing this, it's not really clear to me that someone should be able to tell me I can't do that."

Platt suggests an alternative, a requirement that at the point where buyers exchange dollars or euros or yen for crypto, they be informed of the energy footprint of whatever form of currency they are purchasing. "You could say that a Bitcoin transaction consumes 100 times more energy than an Ethereum, and the hope is that this leads users to moving away from less energy-efficient cryptocurrencies," he says.

There are still unknowns, Nerula says, about whether something unexpected about the new incentives created for users of proof of stake will undermine its apparent advantages. There also could be software glitches or new types of attacks that no one has thought of yet.

Etherium's successful migration to proof of stake could prompt the EU or other governments to revisit regulations about proof of work.

"There isn't a clear winner to me right now in terms of highly secure, low resource and energy usage, and being easy to understand and hard to go wrong," she says. "One thing proof of work has going for it is that it's been running for 13 years pretty successfully and robustly, and you know, that's not nothing."

Carlsten, M., Kalodner, H., Weinberg, S.M., and Narayanan, A.,
On the instability of Bitcoin without the block reward ACM Conference on Computer and Communications Security, 2016
http://randomwalker.info/publications/mining_CCS.pdf

Why bitcoin uses so much energy | CNBC Explains
https://www.youtube.com/watch?v=JT22_dUsl5M

The Long Road to Driverless Trucks