In computer science, systems are typically divided into two categories: software and hardware. However, there is an additional layer in between, referred to as middleware, which is a software pipeline—an operation, a process, or an application between the operating system and the end user. This article aims to define middleware and reflect on its necessity, as well as address controversies about when and where it applies. It also explores the application of middleware in emerging technologies such as cloud computing and the Internet of Things (IoT), as well as future middleware developments.

The term was introduced in the early 1980s. It encompasses complex software solutions that modernize legacy systems—typically mainframes—through new features such as software and application components. Initially, it was solely used to expand the layer separating the network and application layers. Subsequently, its use expanded to serve as the layer above the operating system and network layer, and below the application layer. This means that middleware could now facilitate the generic communication between the application component and the distributed network.

Through middleware, a programmer has the option to implement a decentralized solution instead of having to interact and analyze different components.18

In recent literature3,12,14,16 multiple definitions have been used, depending on the field of research. On the one hand, both a software and a DevOps engineer would describe middleware as the layer that "glues" together software by different system components; on the other hand, a network engineer would state that middleware is the fault-tolerant and error-checking integration of network connections. In other words, they would define middleware as communication management software. A data engineer, meanwhile, would view middleware as the technology responsible for coordinating, triggering, and orchestrating actions to process and publish data from various sources, harnessing big data and the IoT. Given that there is no uniform definition of middleware, it is best to adopt a field-specific approach.

The main categories of middleware are as follows:11

Academics have further segregated middleware depending on the application module it serves, such as database and Web server. There are several types of middleware, falling into these key categories: reflective, agent, database, embedded, portal, and device (or robotics).4,15

Third, portal middleware creates a context-management tool in a composite, single-screen application, while device (or robotics) middleware simplifies the integration of specific device operating systems or robotic hardware and firmware. 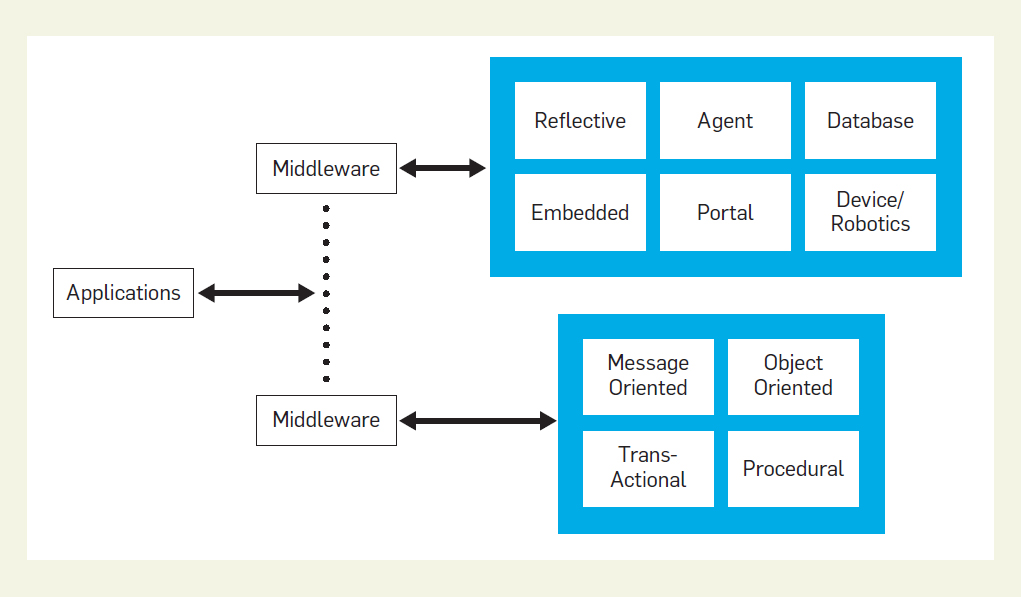 The Use of Middleware

In developing an application, the three necessary elements to consider are scalability, maintenance, and automation. First, developers avoid horizontal scaling, which is just adding resources to expand the capabilities of the main system. They strive for workload partitioning—optimally distributing job scheduling over the overall network. As for maintenance, the separation of concerns principle is very important for developers, both to make each entity reusable (modularity) and to bundle its properties (encapsulation). (Typical modular examples include the Linux kernel, since the code base can be altered—added/removed—and a LEGO set where different elements can be used multiple times to build a system.) Moreover, developers focus on automating operations to reduce errors and make an application available 24/7 or ad hoc (that is, on-demand provisioning).

Middleware can act as a facilitator to achieve scalability, maintenance, and automation. Specifically, it adds a layer that simplifies complex systems into small integrations, allowing for their association with the network of distributed resources.2 This means that middleware provides agility during software development while simultaneously decreasing the time for a full software cycle; it also provides developers with easier future scaling.

Before the widespread use of the Internet and the adaptation of high-speed connections, most applications were developed as single-tiered, independent software solutions. This software was "monolithic," built to serve a specified purpose and activity, and thus not designed to connect and interact with other applications and software components. Single-tiered software needed a complex middleware solution either to share information with different modules, such as client/server, or to deliver a request from host/resource-management software.

After the Internet revolutionized the way developers operate, an increasing number of transactions driven by multiple computing devices connected to a large, distributed computer network (also referred to as IoT). Distributed computing introduced SOA (service-oriented architecture) instead of monolithic applications. Specifically, SOA consists of multitiered software solutions that implement the separation of entities and services, thus breaking down each component into microservices. This is achieved by decreasing the system's complexity and further increasing its modularity. In this scenario, middleware considers each entity as unique and autonomous. Thus, future modifications are addressed to a specific service (module) and not to the overall system's components.

This middleware "is an approach for developing a single application as a suite of small services, each running in its own process and communicating with lightweight mechanisms, often an HTTP resource API."13

Middleware is closely connected to APIs (application protocol interfaces), serving as the tier or a software bundle for different APIs used by a programmer. This means that middleware can simplify sophisticated applications so that the developer focuses on not only the communication of components but also the business logic and the systems' interaction. This is an important aspect in the era of IoT, since APIs are the main gateway to connect devices and send information without errors.

The term IoT describes a large network of interconnected devices that gather real-time data fused by multiple smart sensory devices.15 To achieve that, electronic devices (mobile/tablet/computer) send data to an external service hosted in a cloud or edge-computing infrastructure. Recent research has focused on developing an IoT network that will not only interact with its surroundings, but also act autonomously without requiring a user's intervention. Under this scope, IoT researches pervasive/ubiquitous computing as the future of computing applications.10 Computers are no longer associated with single devices or a network of devices. Pervasive computing is defined as "the entirety of situative services originating in a digital world, which are perceived through the physical world."8

Moreover, the architectural principles to develop an IoT application include a review of security, energy consumption and monitoring, reliability, interpretability, and communication.19 As mentioned, middleware provides an abstract tier for all these functions. Based on its software licensing, it can be categorized as corporate-maintained, open sourced, or device-specific (for microcomputers/actuators such as Raspberry Pi or Arduino).

Figure 2 depicts how IoT middleware typically handles its operations based on the following separation of concerns: 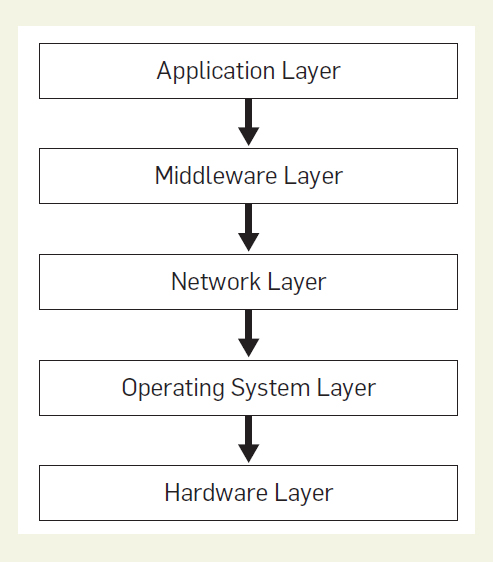 A review of some of the most promising open-source projects regarding IoT middleware6 highlights the following: OpenIoT for sensor systems in the cloud; FIWARE for translating protocols of communication between devices; LinkSmart (formerly known as Hydra) for fast deployment and high scalability of data storage and machine learning; DeviceHive for IoT abstraction of automation layers regarding communication, control, and management; and ThingSpeak for industrial IoT frameworks regarding smart applications.

In developing an application, the three necessary elements to consider are scalability, maintenance, and automation.

The Future: Cloud Containers and Microservices

While developers use virtualization (layering of resources into infrastructure), hypervisor (interpreters of the operating system), guest operating systems (with their own kernels), and applications, middleware promoted a decentralized deployment in a single multipurpose environment. This became evident following the exponential increase of containers—software environments that can be rapidly and easily deployed multiple times via the same server (host) in an isolated environment, also referred to as a sandbox. Like Java's motto, "Write once, run anywhere," containers are an independent software environment with unique code, libraries, runtime, and dependencies. Middleware tiers have also shifted from virtualization to containerization for the same purpose of optimizing communication and abstracting the communication protocols to develop a software pipeline.

From the scope of a developer,7 the shift to cloud-computing solutions means that less coding is required, since most of the work in the cloud infrastructure is performed "under the hood." In other words, several aspects of distributed programming and enterprise development previously handled by a local middle tier can now be handled remotely. More specifically, common issues to be tackled include scaling, resilience observability, resource management, and continuous integration and delivery. This means that enterprises will limit the number of middleware developers. Instead of deployment, they will focus on architecture and application development.

Middleware can be used during several phases of the software cycle—from its architecture and development to its deployment. The perpetual need for the digital transformation of businesses (from monolithic to microservice implementations) has showcased that middleware is here to stay. Whether segregating a sophisticated software component into smaller services, transferring data between computers, or creating a general gateway for seamless communication, you can rely on middleware to achieve communication between different devices, applications, and software layers. Moreover, there is a need to educate new developers about middleware and highlight its importance through modern education techniques and learning systems.5,17

Like Java's motto, "Write once, run anywhere," containers are an independent software environment with unique code, libraries, runtime, and dependencies.

Following the increasing agile movement, the tech industry has adopted the use of fast waterfall models to create stacks of layers for each structural need, including integration, communication, data, and security. Given this scope, it is no longer important to study the potential expansion of cloud or data services. Emphasis must now be on endpoint connection and agile development.

This means that middleware should not serve solely as an object-oriented solution to execute simple request-response commands. Middleware can incorporate pull-push events and streams via multiple gateways by combining microservices architectures to develop a holistic decentralized ecosystem.

Alexandres Gazis is a researcher and Ph.D. candidate in the department of electrical and computer engineering, Democritus University of Thrace in Xanthi. He is a member of the Technical Chamber of Greece and works as a software engineer at Eurobank S.A., specializing in core banking systems and mainframe development.

Eleftheria Katsiri is a tenured assistant professor in the department of electrical and computer engineering at Democritus University of Thrace in Xanthi, where she teaches operating systems, structured programming, human-computer interaction, and distributed and parallel systems. Since 2014, she has been an adjunct researcher of the Athena Research and Innovation Center.

The Failings of Machine Learning Models

Is AI Threatened by Too Little Data?