In the mid-1990s, many vendors, such as IBM, Staffware, Filenet, Lotus, and Xerox, provided workflow management (WFM) software. In fact, WFM systems were expected to become an integral part of every information system. Despite these high expectations, only a few organizations successfully used this technology. After the limited success of WFM systems, the scope was broadened beyond automation, leading to a wave of business process management (BPM) systems.1,7 Many organizations documented their processes using notations such as the business process model notation (BPMN), but few successfully used BPM technologies to create information systems driven by process models.8

One of the main reasons was because traditional process management approaches underestimated the complexity and variability of real-world processes and did not explicitly use the data available in existing enterprise resource planning (ERP) and customer relationship management (CRM) systems. Although the first process-mining algorithms8 were developed around the turn of the century, large-scale adoption of process mining is rather recent. Most considered the WFM/BPM field to be "dead" because model-driven approaches did not live up to their expectations. However, the uptake in process mining has radically changed this notion over the past five years.

According to Gartner, there are now more than 40 process-mining vendors.4 Last year the market grew 70% and is expected to grow 40%–50% each year.4 Celonis is the leading process-mining vendor and Germany's first decacorn—that is, a startup valued at more than 10 billion USD. Most process-mining companies are based in Europe—for example, Celonis, LanaLabs, Signavio, MPM, and PAFnow from Germany; ProcessGold, Mavim, and Fluxicon from the Netherlands; Livejourney from France; MyInvenio and Integris from Italy; QPR from Finland; and Minit from Slovakia. Europe's leadership in this market may be explained by the observation that most process-mining research has been conducted there. Given the focus of this special section of Communications, in this article we describe process mining's European roots as well as developments in the field. Using Celonis as an example, we show how process mining differs from traditional process management and automation.

First, we explain the pitfalls of traditional, purely model-based approaches. Then, we introduce the field of process mining and elaborate on more recent developments, where process mining fuels new forms of automation to address performance and compliance problems. Finally, we focus on Celonis as a successful example of the transformation from academic research into one of Europe's most successful IT companies.

The first prototype office information systems were developed in the 1970s. Michael Zisman developed the SCOOP system in the context of his Ph.D. project,10 and Skip Ellis and colleagues at Xerox developed the OfficeTalk system.2 This was when people dreamed of the "office of the future"—that is, completely paperless and fully automated procedures.3 The vision was that one could generate the information systems to support processes simply by modeling those processes. WFM systems attempt to realize this vision. DOMINO was the first European WFM system.5 Just like SCOOP and OfficeTalk, DOMINO used Petri nets—invented by Carl Adam Petri in the 1960s—to model processes. Several U.S.-based researchers picked up on the idea, working on both the theory and application of Petri nets. Interestingly, the pioneers in the field recognized the importance of concurrency and, therefore, used Petri nets.

In the 1990s, many WFM products followed. Many people, including myself, expected that WFM systems would be used everywhere. However, despite a broad choice of products, adoption was limited. BPM systems1,7 extended WFM systems with more management and analysis capabilities, but these systems also suffered from limited adoption.

Between 1975 and 2005, the epicenter of process management research gradually shifted from the U.S. to Europe. Moreover, process modeling became more popular, and over time, the BPMN became the de facto standard.1 Despite the widespread use of BPMN to model operational process models, the effect on improving processes was limited. One can argue that handmade BPMN models often have little to do with reality and are not taken seriously. Trying to implement these simplistic models using WFM/BPM technology is destined to fail. Therefore, these purely model-driven approaches became less popular over the last decade.

Purely model-driven approaches tend to be disconnected from reality; process mining aims to address the problem. Organizations are not interested in handmade models that do not capture a constantly changing reality. I was one of the first to witness this, and at the end of 1990s, began a systematic, large-scale effort to learn the actual processes using event data. Unlike earlier approaches, which were either not data-driven or not process-centric, process mining combines event data and explicit process models.

Figure 1 provides an overview of process mining.8 First, event data is extracted from information systems. These may be ERP systems, such as SAP and Oracle; CRM systems, such as Salesforce; or custom-made or domain-specific systems, such as healthcare information systems. Each event refers to an activity, has a time-stamp, and may refer to any number of objects (orders, customers, items, and deliveries). It is often assumed that there is a special object, called the case, that relates and connects the individual events. Based on such event data, a process model can be automatically discovered. The model may describe all behavior or just mainstream behavior. It can also be adapted to describe what should have happened. Hence, process models may be descriptive or normative and are connected to event data using replay or alignment techniques.8 Through this connection, it is possible to diagnose performance and conformance problems. For example, the model can be annotated with information about deviations and bottleneck information. It is also possible to automatically conduct root-cause analysis and even predict performance and conformance problems. 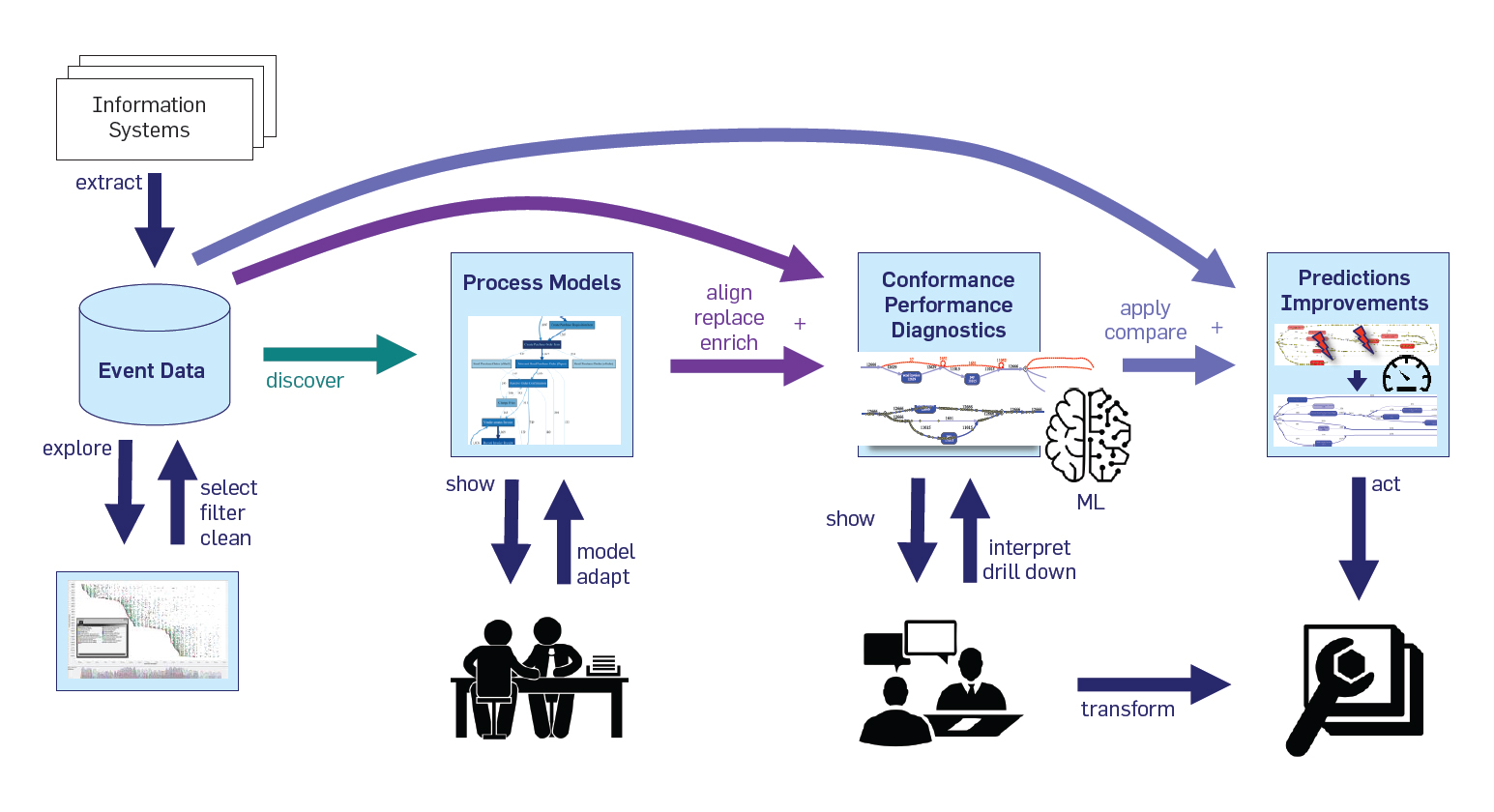 The Alpha algorithm, which I developed, was the first algorithm to discover concurrent processes from event logs.8 Given a directly-follows complete event log generated by simulating a structured workflow net, the algorithm is guaranteed to produce a behaviorally equivalent Petri net. The two main approaches for conformance checking are token-based replay and computing alignments between log and model.8 In general, process mining-based algorithms tend to be very different from mainstream data-mining and machine-learning approaches.

Process mining can be used to uncover so-called "execution gaps," where reality is different from what is expected or desired. Conformance checking can be used to diagnose known "execution gaps," and process discovery may reveal problems nobody was aware of. However, to improve the process, such "execution gaps" need to trigger improvement actions. Here automation again plays a role. As mentioned, traditional WFM/BPM technology was not very successful. However, one may use process mining to target the "execution gaps" in the process without trying to replace existing systems. Unnecessary rework or repetitive actions can be detected and bypassed or done automatically. Here, low-code integration platforms make it easy to trigger exactions in existing systems—for example, automatically sending an email message, redistributing work, or executing an SAP transaction.

The Celonis Execution Management System (EMS) supports all process-mining capabilities shown in Figure 1. Celonis was founded in 2011 by Alexander Rinke, Bastian Nominacher, and Martin Klenk. They discovered the early papers on process mining and created a process-mining start-up that is widely considered one of Europe's most successful young IT companies. The author is the chief scientist at Celonis and served since 2015 as its chief academic advisor.

Celonis has 1,800 employees and 2,000 customers. Some Celonis installations have more than 5,000 active users while handling more than 500 million cases and 10 billion events. The current valuation is 11.1 billion USD (after obtaining $1 billion in Series D Round in June 2021). Celonis is clearly the market leader in process mining.

Figure 2 shows a screenshot of the Celonis EMS while discovering a process. Celonis was the first process-mining system not focused exclusively on data scientists, but on engaging the people who are actually involved in the processes. Because hundreds or even thousands of organizations analyze similar processes, it is possible to prepackage evidence-based knowledge. Celonis also supports action-oriented process mining with its embedded low-code integration platform, which can support hundreds of applications, including SAP, Oracle, and Salesforce. This way, process insights can be turned into improvement actions. 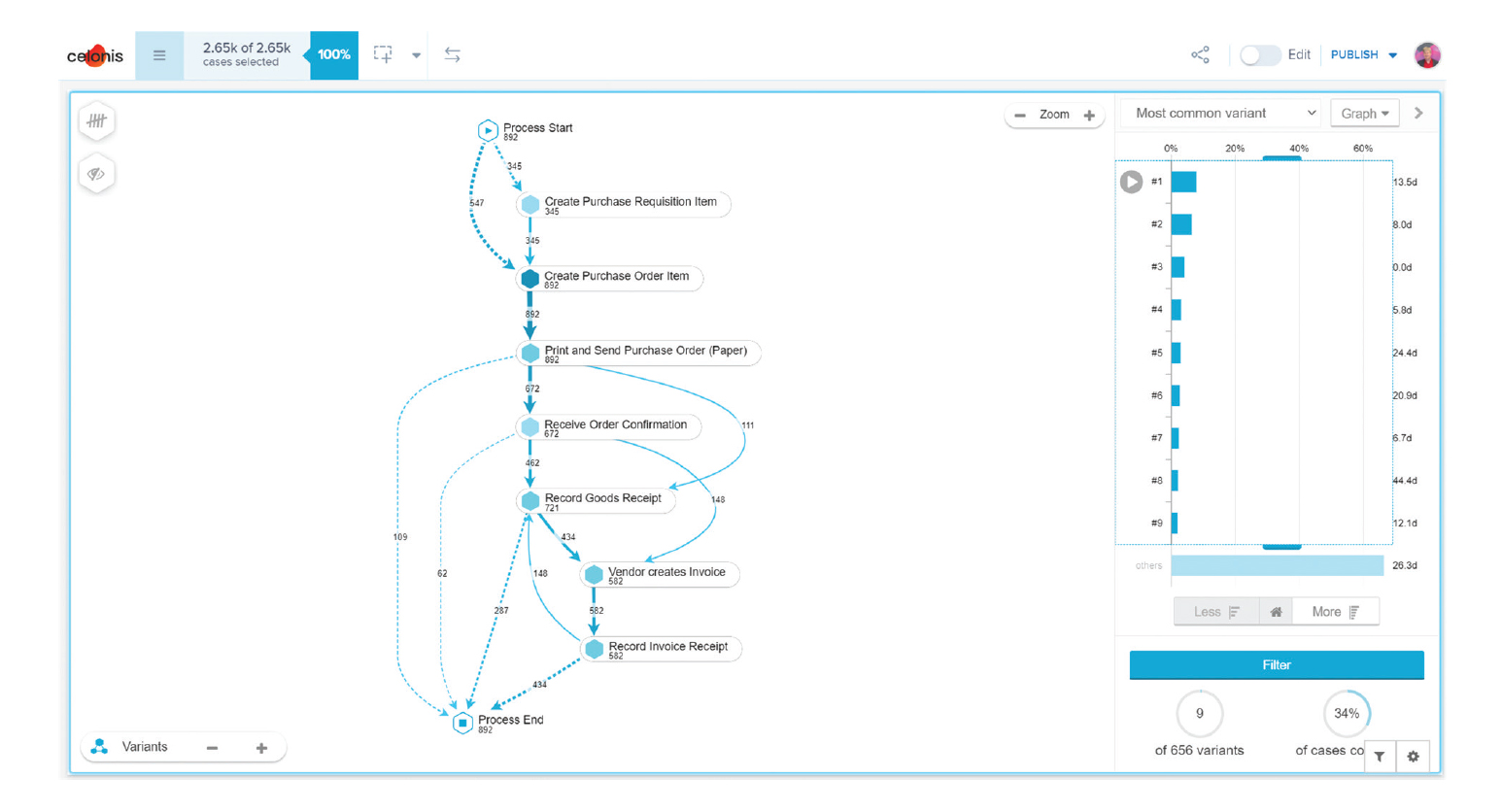 Figure 2. Screenshot of the Celonis Execution Management System (EMS) while discovering a process model for a Purchase-to-Pay (P2P) process.

Process mining can be viewed as "taking X-rays" to uncover known and unknown "execution gaps," while automation can be seen as the surgery undertaken to address those gaps and improve the process in a targeted way. Classical WFM/BPM approaches can be seen as surgery that is performed before taking X-rays to diagnose the actual problems. The Celonis EMS aims to combine both—that is, using process mining to uncover, diagnose, and predict performance and compliance problems. These problems are subsequently addressed through targeted forms of automation.

Although most process-mining research is conducted in Europe, process mining is applied globally, and adoption is rapidly growing in the U.S. and Asia-Pacific. For example, more than 50% of the Fortune 500 companies are exploring process mining. Yet, we are just at the beginning, with many opportunities for cutting-edge research and innovative industrial applications.

Beyond Interpretability: Developing a Language to Shape Our Relationships with AI