Computing for Climate Resilience in Agriculture

Two key problems in India's water sector are the estimation of dry-spell vulnerability during kharif, the monsoon season, and the design of water and energy-planning inputs to help villages undertake demand-side management during rabi, the post-monsoon season.

In this article, we report our joint work with the Government of Maharashtra's Department of Agriculture on a World Bank-assisted program called the Project on Climate Resilient Agriculture, or PoCRA. The project is spread over 5,000 villages in 15 districts of Maharashtra (see Figure 1). Its main objective is to make smallholder farmers resilient to climate variability through targeted interventions. A key strategy is to promote water and energy budgeting in these villages and to supplement the community infrastructure and the capabilities of individual farmers. 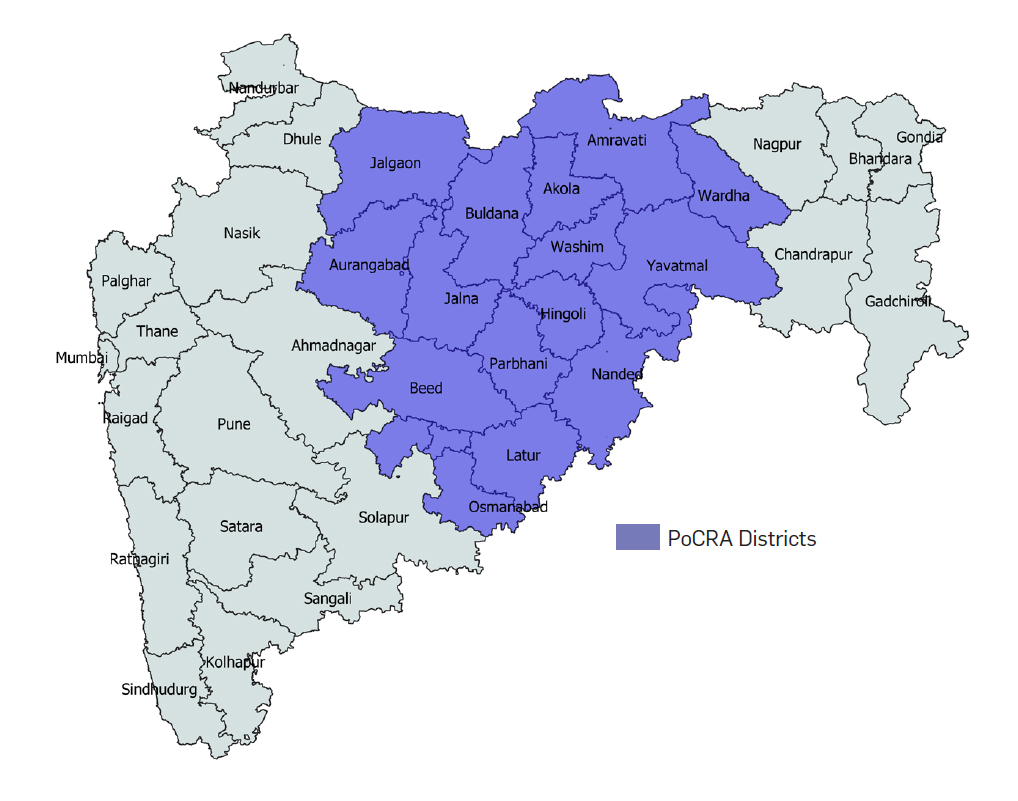 IIT Bombay has been a knowledge partner to PoCRA since its inception in 2017.

Kharif crops, typically soybean, millets, and cotton, depend on rainfall for their major water requirement. This is typically supplied by soil moisture which acts as a water bank that is replenished by rainfall and is used by the root system of the crop. However, when there are dry spells in the monsoons, depending on the soil's texture and depth, and other parameters such as slope, farm bunding, among others, different farmlands experience different crop-stress, which ultimately results in reduced yields or even crop failure. The variation in stress within the same village can be considerable. The remediation for this is to provide supplementary irrigation from nearby streams or wells using pipelines and pumps. The question then is to quantify these crop water deficits (in mm) for farms, to aggregate these at the village level and compute a net demand for protective irrigation, and to compare this demand with the supply side, that is, water impounded due to interventions at the farm level or village level.

The second problem was to stabilize post-monsoon, or winter and summer, crop yields. These are typically a mix of high-value crops such as wheat, vegetables and fruits, and the usual gram and pulse crops. Since these are grown on limited groundwater or stored surface water, overcropping results in water rationing toward the end of the season. This too results in poor yields, pest attacks, and crop failures. An increasing problem is a competition for water through deep borewells and expensive water transfers from large distances. Our task was to provide the village community with an estimate of the total groundwater and surface water available for the post-monsoon season, and to design suitable crop planning and extension paradigms.

In both cases, the solutions expected were design, data, and extension methods, which would be used by the Department of Agriculture (DoA) and partner agencies and implemented in the project villages. These would be the first few steps toward replicating community-based demand management, which has been successful in some exemplary villages such as Hiware Bazar.

The solution architecture. Our solution consists of a core engine—a point model simulating soil conditions integrated into a geographic information system (GIS) environment. This was coupled with a planning module which provides linkages to administrative and infrastructure data such as village-level cropping patterns, and locations of tanks and bunds. The IT stack provides the interface between various scientific and administrative layers. 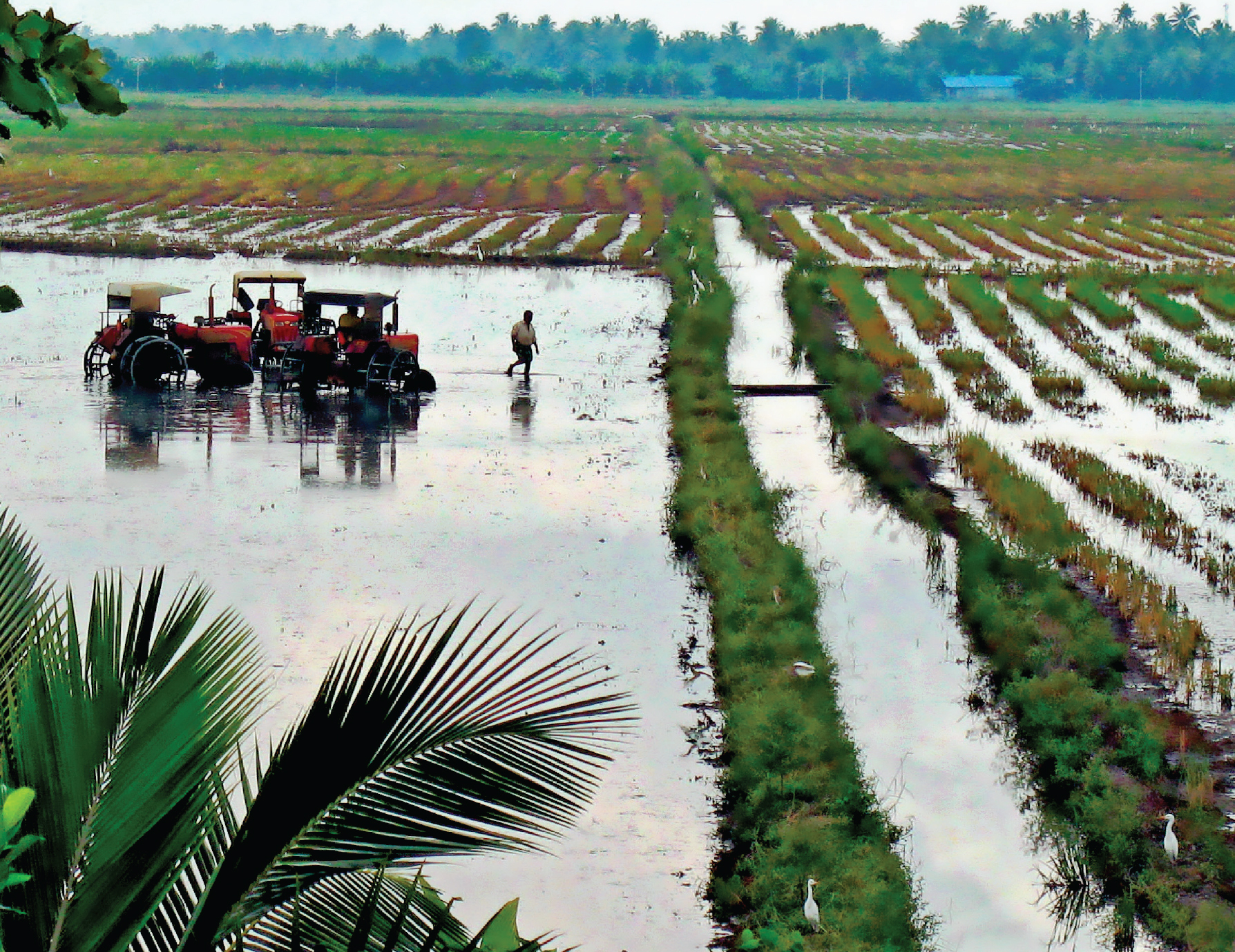 Figure. The framework gives a focus to the adaptive capacities of farmers and local planners within villages.

The model. The point model is a soil-water balance model which estimates the soil moisture availability and crop water deficit for any crop sown at any point in the PoCRA region, for a given rainfall pattern. In fact, it gives the full distribution of the rainfall into surface runoff, soil moisture, crop water uptake, and groundwater recharge, and strictly satisfies massbalance at all the timesteps. See the schematic diagram in Figure 2. The model integrates various well accepted and widely used scientific models such as the U.S. Department of Agriculture's Soil Conservation Service Curve Number (SCS-CN) to estimate surface runoff,3 U.N. Food and Agriculture Organization (FAO) models1 to estimate crop water demand using weather data, and Soil & Water Assessment Tool (SWAT) models2 to estimate the stocks and flows, all on a common computational platform.

Figure 2. The schematic diagram of the point model.

The model uses datasets such as land use, soil texture, soil depth, elevation, and slope from existing maps and weather data provided by external agencies. The data is incorporated into the PoCRA IT Stack (using open source database PostgreSQL) and is made available at various spatiotemporal scales. This allows us to compute the water budget and crop water deficit at any farm and for any period. See Figure 3, where a soybean farm plot in Sangamner experienced an estimated deficit of 103mm.

Figure 3. Computation of daily soil moisture, crop water uptake and deficit for the soybean crop in Clayey Loam soil by the point model for 2016 rainfall as recorded by Sangamner weather station. On the x-axis are daily rainfall events.

Next, the point model is incorporated into the GIS environment as a plugin (using open source GIS software, quantum GIS, and Python scripts), and the point model results are aggregated spatially and temporally to produce regional water budgets for all the crops, for the decided time period. This has led to a back-office driven, automated computational framework which sits on a robust IT stack, and which allows for easy and efficient computation of water budgets for the project villages. This procedure is shown in Figure 4. 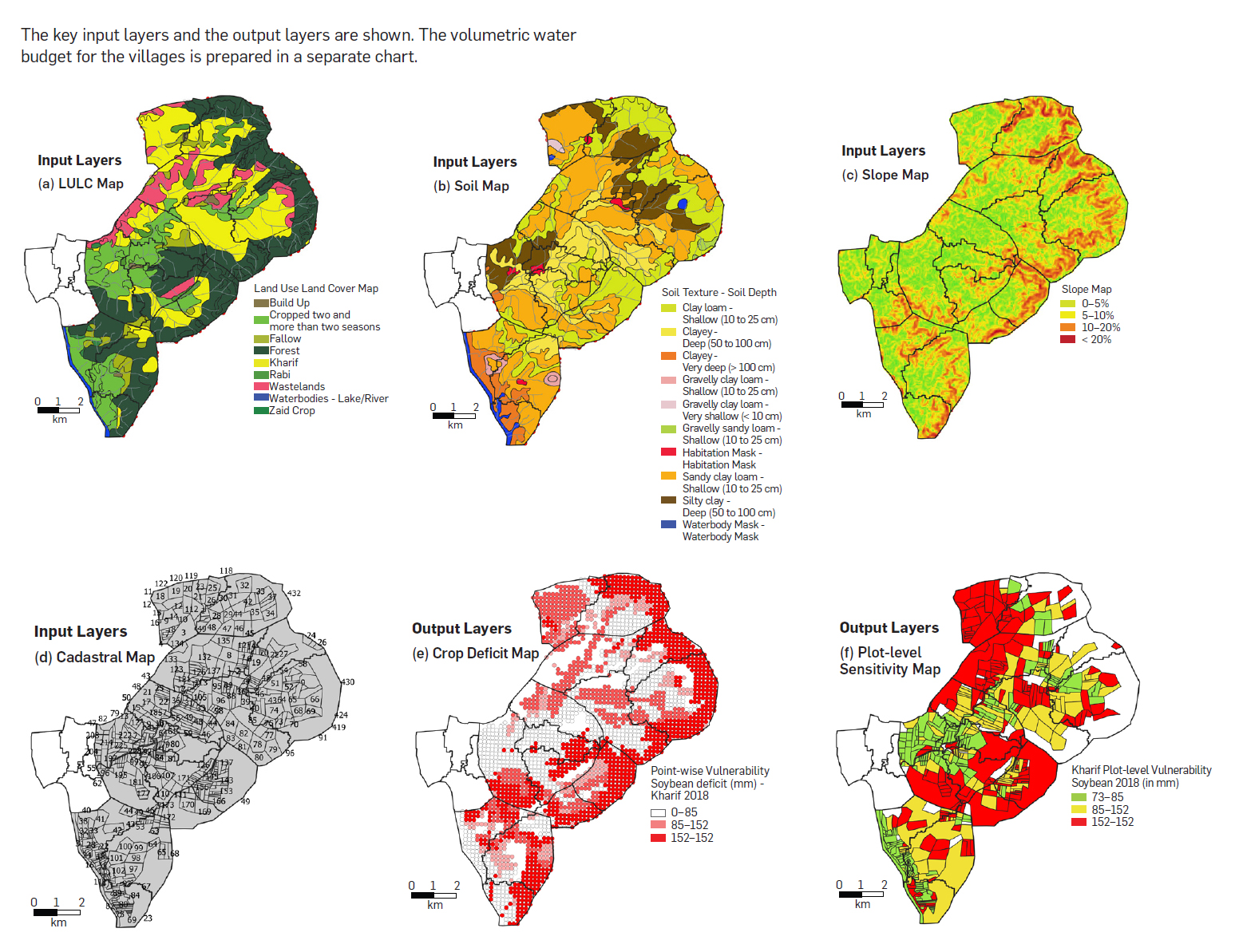 Figure 4. The computation of the water budget and vulnerability in a village cluster in Hingoli district.

The Planning Module and the IT Stack

At the ground level, local planners enter key primary data such as village-specific cropping patterns and water-harvesting structures data into an easy-to-use and simple mobile-based interface, which uses the above back-office computations to generate village-level water budget charts. The charts are displayed in all the 5,000 PoCRA villages. Such a water budget planning framework has enabled the DoA to focus on the spatial imbalances in geographical endowments and farmer adaptive capacities within the village, and at the same time helped local planners and the community to plan better soil and water conservation structures to harvest surplus run-off, as well as to plan rabi, summer, and annual crops commensurate with the water budget. One of the outputs is also the farm-plot level vulnerability map, that is, specific plots where crop water deficits are likely to be high. This may be used by state agencies to identify and support specific farmers in the village.

Our task was to provide the village community with an estimate of the total groundwater and surface water available for the post-monsoon season, and to design suitable crop planning and extension paradigms.

Another important contribution was the design and development of the IT stack, which integrates various datasets—remote-sensing, administrative, hydrological, and real-time weather datasets—in a common Web-GIS framework. These datasets are organized so they may be queried at various interoperable spatial and temporal scales.

This has allowed the development of several project-related scientific and planning modules, for example: 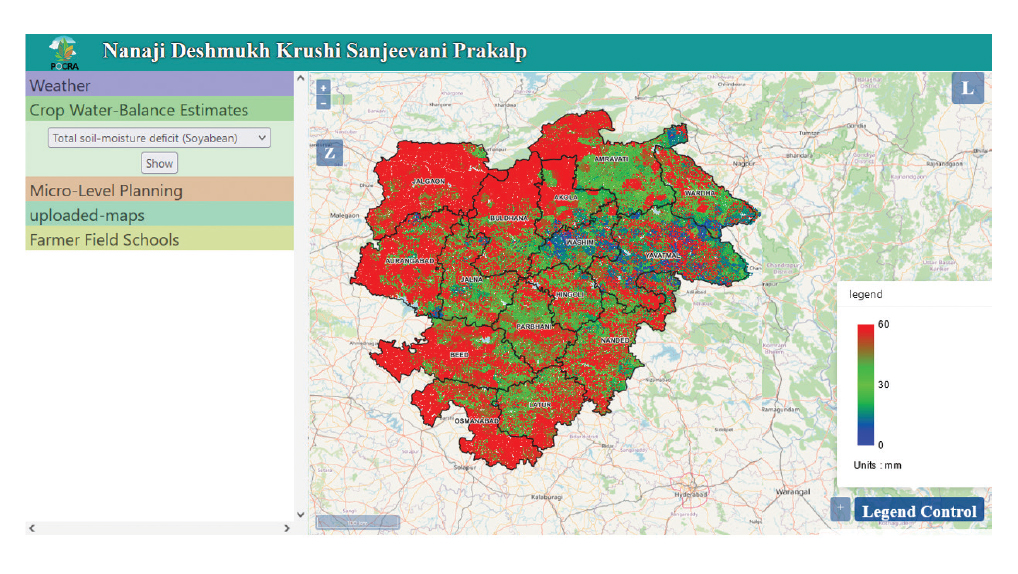 Figure 5. Aggregation of the point model results to display total crop water deficit for soybean for the entire PoCRA region as of Oct. 10, 2021.

Similar dashboards and composite datasets such as Google Climate Engine and GLEAM (Global Land Evaporation Amsterdam Model) are now being designed by various researchers based largely on remote sensing data. However, they come with limitations in that they do not use ground-level datasets, nor do they offer any interfaces for the local planners. Moreover, it is not clear if they achieve mass-balance at local or regional scales.

Although the model is based on widely accepted FAO and SWAT methodology, the usability of the model depends crucially on appropriate calibration and the quality of input datasets. Significant inconsistency was found (through multiple field studies and lab analysis) between the soil characteristics as indicated by the state-provided remote sensing-based maps and the actual soil characteristics as observed on the ground. These discrepancies in the soil texture resulted in significant deviations in crop water availability and deficits. As a result, PoCRA partnered with a specialist agency, the National Bureau of Soil Survey and Land Use Planning, to develop more accurate soil maps. Besides the inaccuracies in the soil data, there are challenges in other input datasets as well, which need improvement. These are listed in the accompanying table. 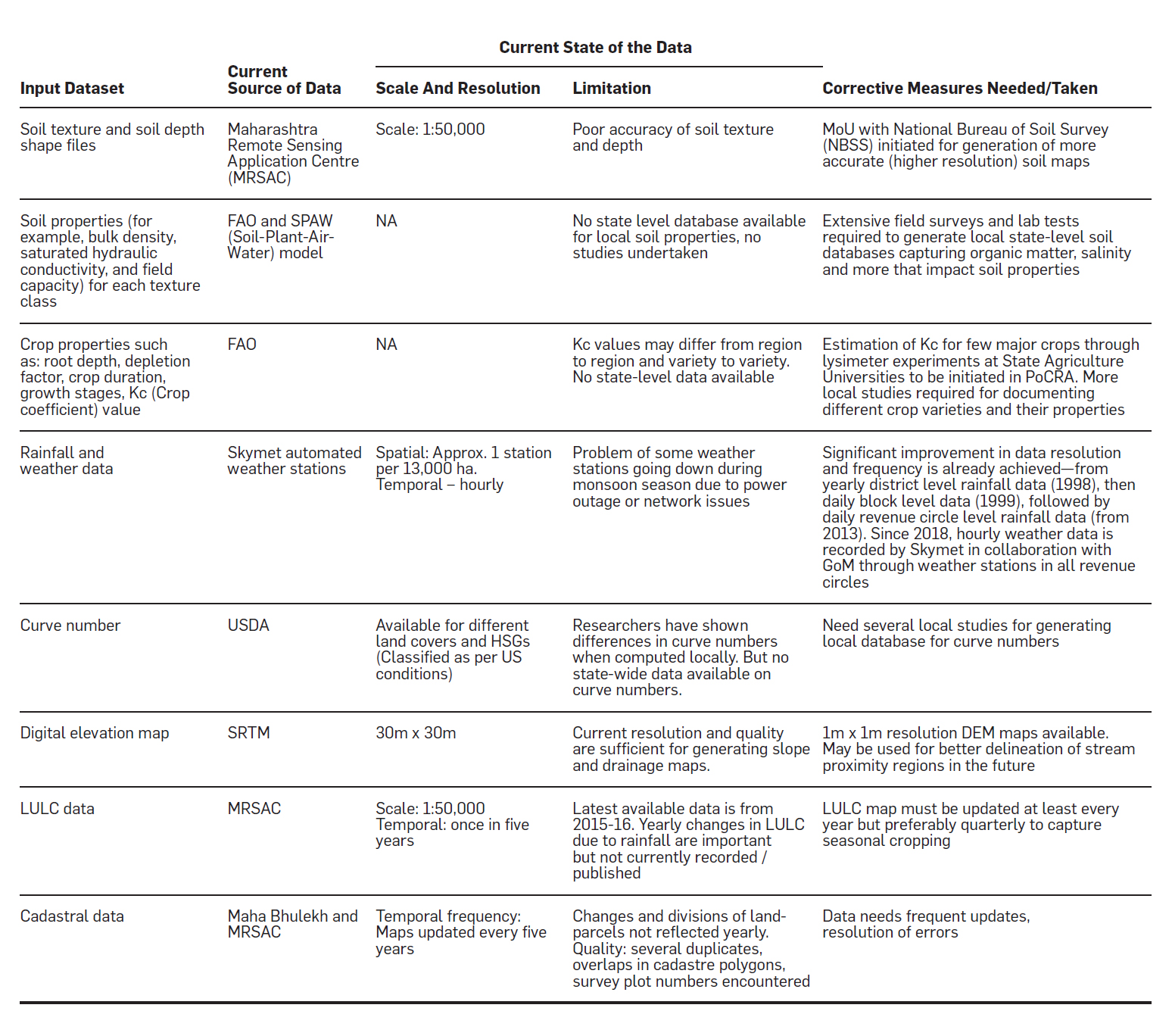 In addition to efforts on improving input data quality, there have been many refinements in the model. These include, for example, improving calibration, incorporating the effect of key farm-preparation practices, increasing the frequency of weather data translations from daily to hourly, incorporating phenomena such as baseflows, and so on. All these changes required extensive field validation which was conducted in over 50 villages. Through these improvements, our goal is to improve the accuracy of water budget estimates to achieve greater community acceptance of the tool.

Thus, the model and the planning tools address both the kharif dry spell as well as the rabi planning problems. Moreover, they provide a quantification of both vulnerability and resilience, at the farmer level as well as at the village level. The maps and budgets capture the biophysical reality of the village relevant to agriculture and are being used in close to 5,000 villages. The vulnerability maps are now used to order and prioritize requests for the construction of dug wells. Another outcome is the observation that most villages in these drought-prone districts have an average storage of about 15mm, which is very low. Thus, these villages are unable to cope with even a moderate dry spell of 15 days. This has led to greater use of our tool by Maharashtra to guide infrastructure development and extension.

The model and the planning tools provide a quantification of both vulnerability and resilience, at the farmer level as well as at the village level.

The team and the collaboration. These tools were developed by a dedicated interdisciplinary team of faculty members, students, and staff over a span of four years. Many student theses contributed to the project. Prototypes and sample implementations were shared with the PoCRA team at Maharashtra and have been presented and discussed extensively. These were then extended and deployed by the DoA. The collaboration illustrates the intellectual challenges and rewards of working at scale on live problems.

Milind Sohoni is a professor at IIT Bombay, Mumbai, India.

Rahul Gokhale is a senior IT consultant, Mumbai, India.

Pooja Prasad is a post-doctoral fellow at IHE Delft, The Netherlands.

Asim R.P. is an IT expert at IIT Bombay, Pune, India.

Swapnil Patil is a member of the technical staff at Oracle in Bangalore, India.

Stop Passing the Buck on Cybersecurity