Educational Interventions and Female Enrollment in IT Degrees

Despite increasing awareness and efforts made to attract women to computing, they are still poorly represented in information technology (IT) careers.16 The number of females graduating with an IT degree has consistently declined since 1984 when women were 34% of computer science graduates and they currently account for less than 20% of IT graduates in many countries.8,14,15 These figures are replicated in the IT industry where women currently constitute a small part of the work-force—24% in the U.S., 18% in the U.K., and 28% in Australia.5,6 This lack of diversity in IT has repercussions for organizations and for society. There is increasing evidence that diversity in the workplace has a positive influence on productivity.2,6 For example, Herring13 reports that organizations with high levels of gender diversity in teams have higher sales revenues, more customers and greater profitability than companies with predominantly male teams.

Finding capable and confident people with IT skills is very difficult, and many employers struggle to recruit employees, particularly as the talent pool is restricted by the lack of qualified women. Encouraging more women into IT university courses would lead to an increase in both the size and diversity of a country's skilled workforce and address the growing shortfall of IT professionals in the industry. Women's participation in the field could also lead to monetary benefits. For example, in the European Union, it is estimated that existing initiatives8 will improve women's participation in STEM-related fields and this will result in a 610–820 billion euros increase in the GDP.7 Except for monetary benefits, narrowing the gender gap in STEM could also improve science and society.8

While many approaches have been widely implemented, many others have failed to systematically improve female participation at the university level11 (and few have been successful). In the U.S., the Computer Science degree at Carnegie Melon University reached almost 50% in 2016, 2017, and 20189 and Harvey Mudd College increased its enrollment of women pursuing a Computer Science degree from 10% in 2006 to 40% in 2012.1 Frieze and Quesenberry9 attributed the success to not changing the curriculum to be female-friendly but rather doing changes that improve the curriculum for everyone, changing the culture and institutional support for different programs. IT classes provided by the University of Cincinnati in the U.S. have also influenced some of the female students to register for the university's IT courses.10 Others3,4 show that integrating creative expression in computer science units can help attract and retain more students. For example, the Technology, Arts, & Media degree at the University of Colorado, Boulder achieved a 44.8% female enrollment3 and Computing in Arts at the College of Charleston attracted and retained 46% female students.4

These initiatives are a positive step toward understanding how to address some of the issues that cause the low enrollment of women in IT units. In contrast to these studies, this article focuses on existing programs and initiatives in Australia. We examine how female students enrolled in IT-related degrees perceived these initiatives. The need for further research in this area is highlighted also by Tims,19 who mentions that despite the multitude of initiatives and sustained efforts from many organizations, progress is slow.

The authors researched existing programs and initiatives aimed at promoting IT in Australia. A total of 36 initiatives were identified, some aimed only at girls while others were aimed at both male and female. A brief description of each initiative and geographic coverage is presented in the accompanying table. This is not an exhaustive list of initiatives. To avoid some influential programs being missed during our research, the participants were also asked to provide further details about other programs they were involved in. 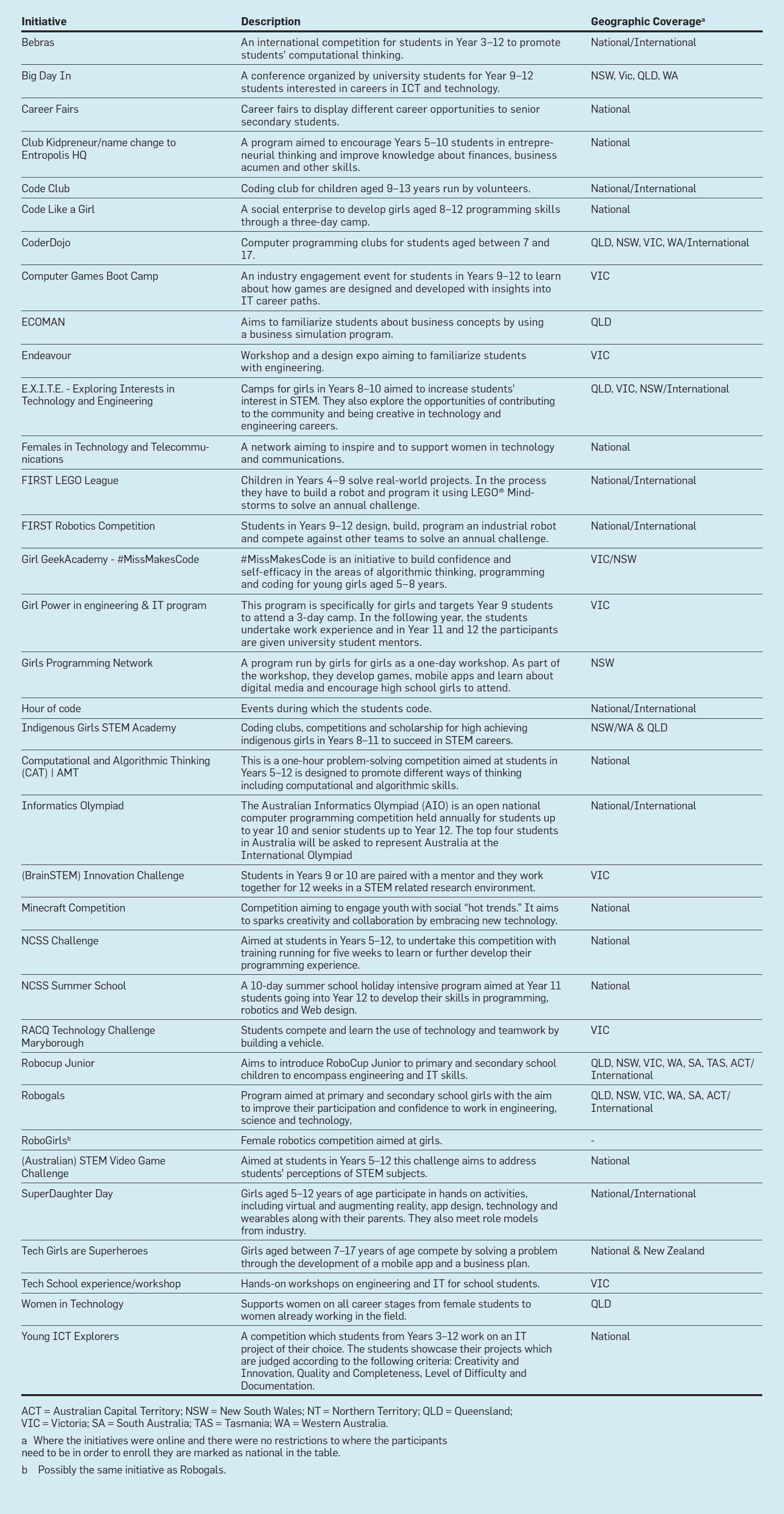 Table. Event attendance and influence on enrolling in a computing-like degree.

Data is collected through the use of a questionnaire. These were distributed to first-year female students enrolled in computing-related degrees in Australia. The questionnaire uses a combination of closed and open-ended questions. The participants were asked demographic questions (for example, in which state they lived during high school) and were asked to state what initiatives they participated in (if any) during high school. Furthermore, they were asked to expand whether they found that any of these initiatives motivated them to enroll in a computing degree. The open-ended questions were analyzed using thematic analysis.12

A total of 119 participants who identified themselves as females completed the survey. Among these, we eliminated the ones who did not fully complete the questionnaires, and the ones who lived in Australia for less than one year and did not complete their secondary education in Australia. They were eliminated as they were very likely not exposed to the programs. This led to 108 participants included in the analysis. Our final sample size included 8% of students that have completed their secondary education abroad but have lived in Australia for more than one year.

Most of the participants lived in Australia all their life (72%) and all of them were first-year undergraduate students enrolled in an IT degree (for example, Computer Science, Business Information Systems). Although we did not plan for it, our sample size included participants completing their education across eight Australian states and Territories. We had more participants from Victoria and New South Wales than other states, but these are also the most populated states in Australia.

Exposures to programs. Our participants were exposed to a variety of programs (on average being exposed to 5.4 programs). The accompanying figure presents on the left-hand side the programs the participants had engaged with. Also, the participants mentioned two other programs not included in our questionnaire. The most exposed program (on the same level to Career Fairs) was Women in Technology to which 36% of the participants took part in. This was followed by Big Day In and Females in Technology both with 24%, Code like a Girl (23%) and Code Club (23%). 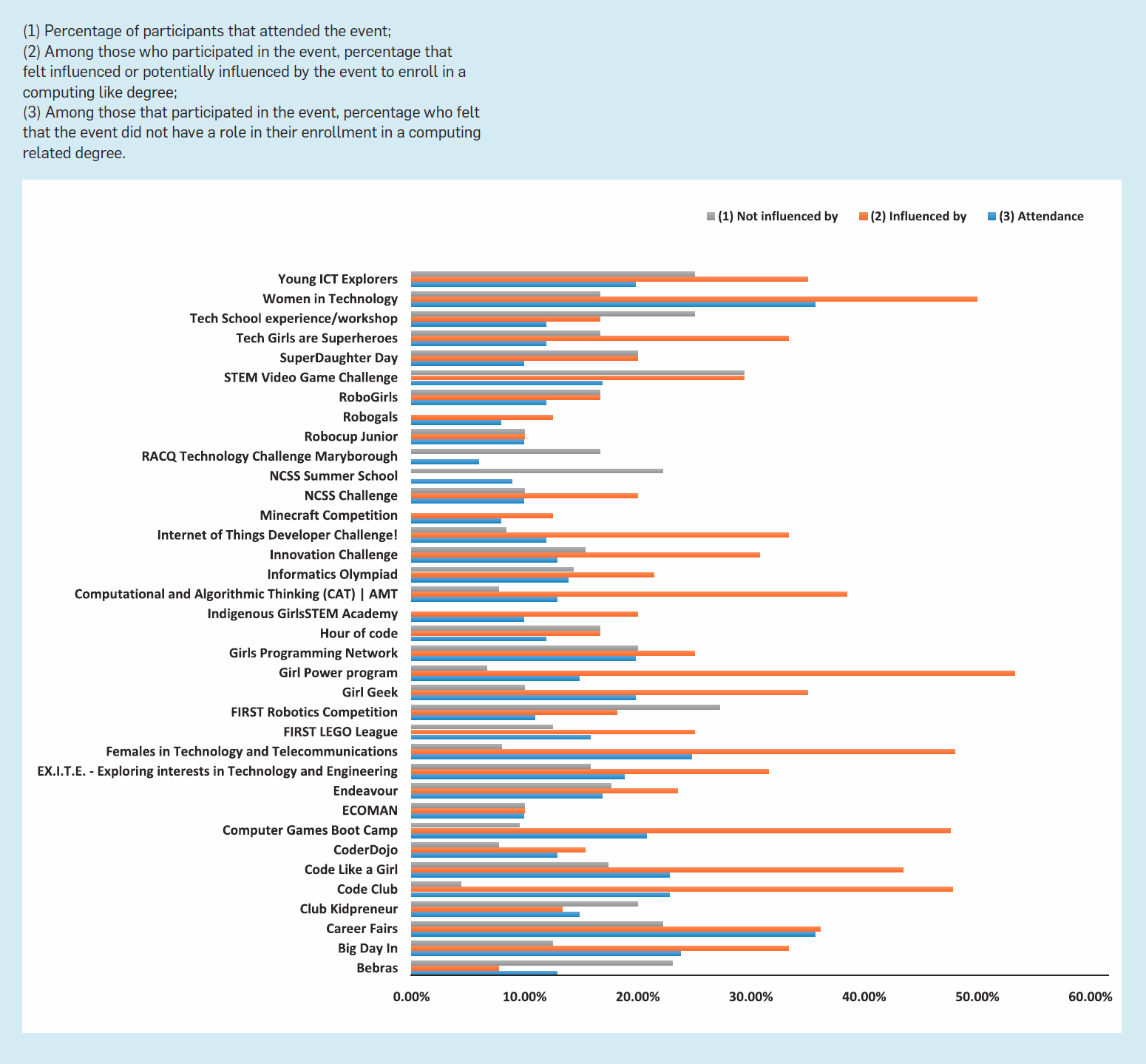 Figure. Event attendance and influence on enrolling in a computing-like degree.

The most influential program for our participants was Women in Tech. A total of 50% of the participants in the study and program mentioned that they were influenced or probably influenced by this program. This was followed closely by Females in Technology and Telecommunications (48%). Although programs dedicated to females only have been perceived as the most influential, other programs such as Code Club and Computer Games Boot Camp also ranked highly.

This article adds further insights into how programs and interventions influence female students' decision to enroll in IT-related degrees. A survey was targeted at first-year female students to report on which, if any, outreach programs influenced their decision to enroll in an IT degree. We found there was no single model of intervention and that different programs influenced different people. This variety of offerings contributed to attracting a diverse pool of students. Notably, those programs aimed specifically at females were perceived to potentially have more influence on the decision to enroll in an IT degree. This does not negate the influence of mixed gender programs but does highlight the importance of having programs aimed only at female students alongside more generalized outreach programs. [Additionally, students had often participated in more than one program and further research in determining how they personally rank the effectiveness of different programs and why they attended them is required.

Further studies are also needed to confirm whether these findings can be replicated more broadly and with an exhaustive list of existing initiatives. For example, this study only addresses the perceptions of current female IT students and does not consider how other students, who may not have been successful in enrolling in an IT degree, perceived the value of the programs. A further factor of interest is whether positive participation in these programs is instrumental in the decision to study IT or whether participation affirms an existing intention. Finally, this study included initiatives at both national and state level. The most popular initiatives were those delivered at a national level which are more widely offered, although we have no evidence that availability affects the findings. Further research is needed to determine the common and unique characteristics of each of these initiatives, how they were advertised and what support was made available to schools to encourage attendance. This would enable more effective targeting of initiatives to overcome the perennial problem of recruiting women into IT programs.

This research has been partially funded by the Australian Council of Deans of Information and Communications Technology. We want to thank Thomas Stockdale who has helped with the participants' recruitment for the study and the Australian Academy of Science which has provided information about some of the different initiatives running in Australia.

7. EIGE. Economic case for gender equality in the EU, 2018; https://eige.europa.eu/gender-mainstreaming/policy-areas/economic-and-financial-affairs/economic-benefits-gender-equality

14. Hutchinson, J. and Tadros, E. Shortage of IT graduates a critical threat, 2014; http://www.afr.com/p/technology/shortage_of_it_graduates_critical_tOuFEdBporFCdLIonKFJFJ

15. NCWIT (Producer). Women and Information Technology By the Numbers, 2014;. http://www.ncwit.org/sites/default/files/resources/btn_02282014web.pdf

Rosemary Stockdale (r.stockdale@griffith.edu.au) is Head of the Department of Business Strategy and Innovation at Griffith University, Melbourne, Australia.