Teaching CS Undergrads Online to Work With Others Effectively

The Spring semester of 2020 will be remembered as the Corona semester. After a decade of teaching a classroom course on soft skills at the Technion (described in Hazzan and Har-Shai1,2), I faced the challenge of teaching it online during the Corona semester (while on sabbatical at the Hebrew University of Jerusalem). At first, I wondered whether teaching soft skills online is even possible since, unlike theoretical courses, I assumed that close face-to-face (F2F) interaction is required in order to practice such skills. Eventually, I realized that teaching this course online has, in fact, some advantages, that this teaching format opens up new opportunities, and that this medium can even foster several soft skills I had not previously considered teaching in the F2F format. This blog demonstrates these advantages by focusing on the use of the breakout rooms option available in Zoom, which I used extensively in the course.

What are breakout rooms? The built-in breakout rooms option available in Zoom enables the creation of teams by dividing the meeting attendees (in this case, the class) into any number of rooms, either manually or automatically, according to the host's (or in our case, the instructor's) choice. After the room allocation is executed, each team finds itself in a virtual room in which the team members can communicate the same as in a regular Zoom meeting. The instructor can visit the rooms one at a time, listening and observing the teams at work and, if needed, answering questions. He or she can also send messages to all rooms. When the host wishes to gather all the participants back in the main session, he or she closes the rooms and after 1 minute, the rooms close automatically and all of the participants return to the main session.

How did I use breakout rooms? The course was attended by 35 third- and fourth-year students. Each time the course content required it, I divided them automatically into nine rooms of 3-4 students each. The automated room allocation often creates teams whose members have never previously met. Prior to room distribution, I gave the class a task, including the time frame allocated for its completion, which was usually short: between 5 to 15 minutes. The tasks focused on the topics we had discussed in class and required each team to create a PowerPoint presentation and to upload it to a dedicated forum that I opened each time for that specific task. The PowerPoint presentation had to fulfill with very clear requirements (for example, three slides: the first presents the names of the team members, and the second and third slides each present an answer to a sub-task). The required product can be also a short video clip, a position paper, and so on.

Soft Skills Students Practice While Working in the Breakout Room

On the mid-semester survey, the students were asked the following question: "On a scale of 1 (not suitable) to 4 (very suitable), indicate the degree to which you feel working in breakout rooms suits you," Twenty-eight students responded to the survey. None of them indicated 1, six (21.4%) indicated either 2 or 4, and sixteen (57.1%) indicated 3. The average was 3.

The students were also asked to list three soft skills that they implemented while working in the breakout rooms, and to describe how each of those skills was applied.

The following table presents the skills most frequently mentioned by the students: 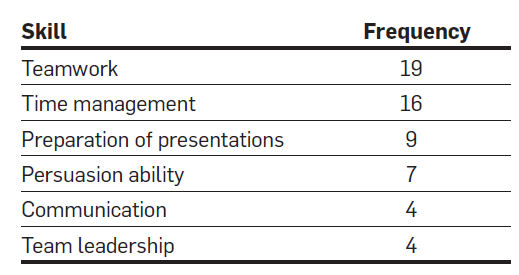 From this list of soft skills which the students indicated they practiced in the breakout rooms, I elaborate here on teamwork, the soft skill most frequently mentioned by the students as being implemented in the breakout rooms, and illustrate how students described its implementation. In addition to regular implementation of teamwork (for example, cooperation and work distribution), the students described the following two ways of practicing teamwork: the need to adapt to working with new team members and the need to assume different roles on different occasions. Students had to practice these two skills repeatedly, every time they worked in the breakout rooms, and their increased attention to these two expressions of teamwork is illustrated below.

The following quote, which addresses the application of the skill "adapting to change," encompasses the two facets of teamwork implementation.

Though these two expressions of teamwork may be applied also in a F2F format, the students' increased attention to them in the online format may be explained by the fact that, due to the social distancing regulations, they worked in distributed teams—each in his or her home/dormitory. The online distributed team format intensifies these expressions of teamwork and students' attention to their existence and implementation was increased. Furthermore, since most of the students had not met F2F before and had not established any relationships, they had to be more sensitive to their team members. Consequently, these expressions were even more salient and meaningful in the remote distributed online format and were applied more extensively.

I believe this attention to the expressions of teamwork will contribute to the students' work habits in the future, in F2F formats and not only when working in distributed teams, which are common in the computer science world regardless of social distancing.

As can be seen, teaching an online course on soft skills is possible, and may even have several advantages over a F2F format. In this blog, I focused on the use of breakout rooms, though additional advantages of online teaching exist as well. These include, for instance, the ease of inviting guest lecturers, who are spared the need to travel to the campus, and the easy use of the chat option which, among its many advantages, enables all participants to "talk" and express themselves in parallel and, consequently, to "listen" and be exposed to many opinions, rather than to a limited number of selected opinions voiced in the F2F format. In conclusion, despite my initial concerns, I realized that anything can be taught and learned online with relevant adjustments, which may even offer advantages over the F2F format.

Orit Hazzan is a professor at the Technion's Department of Education in Science and Technology. Her research focuses on computer science, software engineering, and data science education. For additional details, see https://orithazzan.net.technion.ac.il/.

Americans Have Their Sensitive Online Activity Exposed Over 700 Times Daily

Programming is For More than Engineering; Computer Science is About More than Building Things