5G Commercialization and Trials in Korea

Since Korea has a limited ICT R&D fund compared to other IT global countries, its strategy was essential to achieve its global competence in each generation of mobile communication. Just after the rollout of the world's first 5G service, the government took the next step by announcing the 5G + strategy to promote the 5G application to a wide-ranging industry and create a sustainable 5G ecosystem leading to new growth engines. In this article, we focus on the government-industry 5G collaborations, including the R&D roadmap and promotion to the 5G commercialization, the global collaboration, the first 5G experience, and 5G vertical trials to make the 5G-enabled industrial transformation take place in Korea.

The development of an electronic digital switching system called TDX in the 1980s, the world's first CDMA mobile service in the 1990s, and the nationwide wired and mobile broad Internet networks in the 2000s are the key advances that made it possible for Korean consumers to easily adopt new technologies such as LTE and 5G. In 2018, the handset penetration rate of South Korea was similar to western Europe, where LTE adaption was 84% with 99.95% coverage and 65Mbps downlink capacity.4 Data consumption has been stagnant since 2018, but it has now increased to around 25GB/month after 5G commercialization, which is more than 2.5 times over LTE. 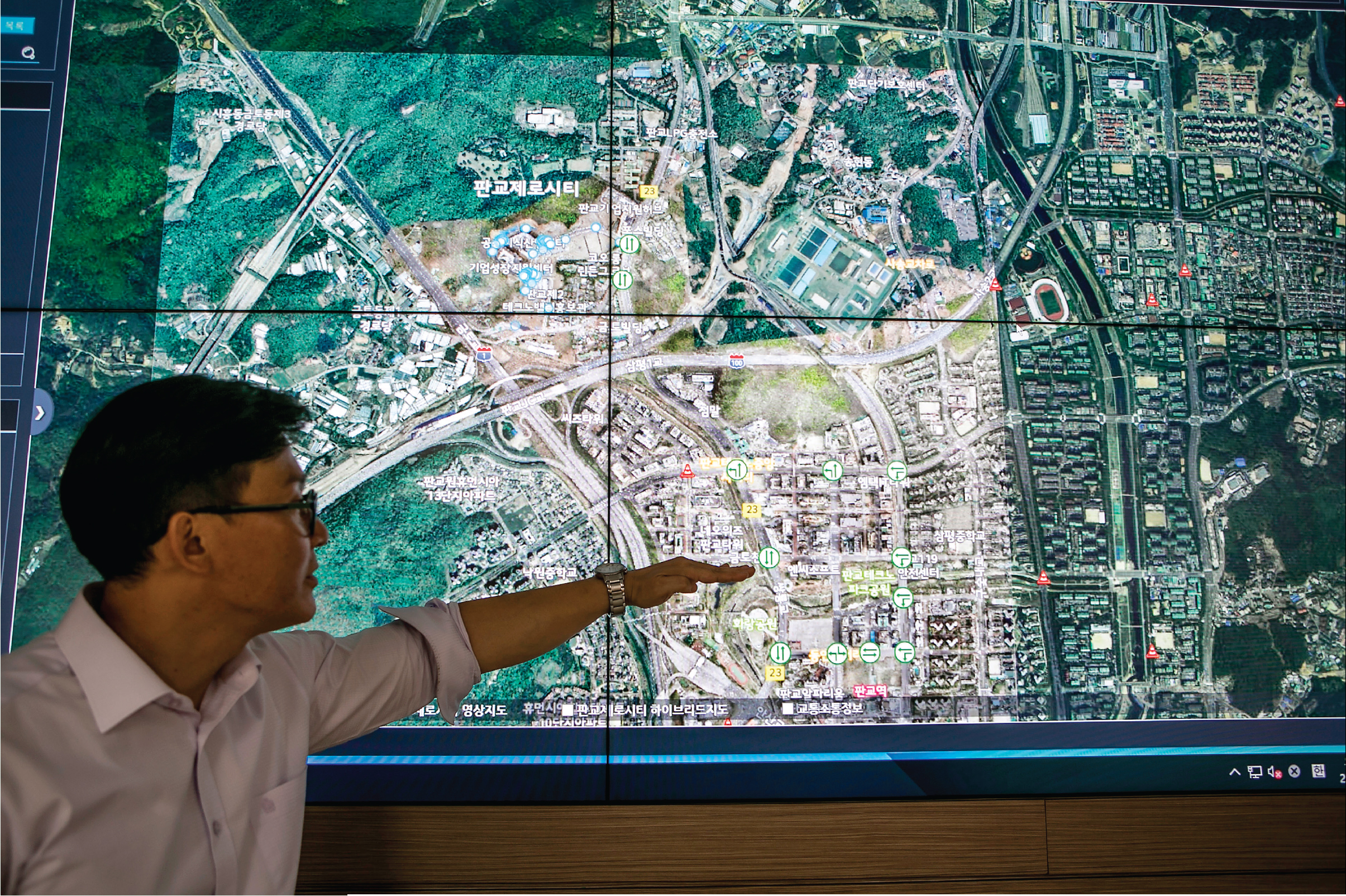 Figure. A researcher stands in front of an aerial view of Seongnam, South Korea, in 2018, exploring the transformation 5G will bring to urban life in the area.

In 2013, the 5G Forum was established as the public-private 5G promotion think tank by distributing a national vision and 5G mobile communication strategy. Having recalled the first commercialization of LTE in Korea in July 2011, and the world-first nationwide network of LTE in 2013, the government-industry alliance for 5G began much earlier compared to previous generations. The 5G Forum published 16 white papers, including vertical-specific ones.1 Figure 1 summarizes the key public-private efforts to 5G commercialization in services, R&D, ecosystem creation, and spectrum. Its strategy had three phases: The first phase focused on R&D to secure core technologies for equipment, and the second phase was aimed at 5G demonstration at PyeongChang Winter Olympics using Pre-5G technology. The goal of Phase 3 was to move forward with 5G commercialization. The PyeongChang Winter Olympics in early 2018 became the momentum gaining opportunity to secure 5G equipment and terminal development early, making sure that 5G service rolled out in April 2019, eight months before the initial plan. 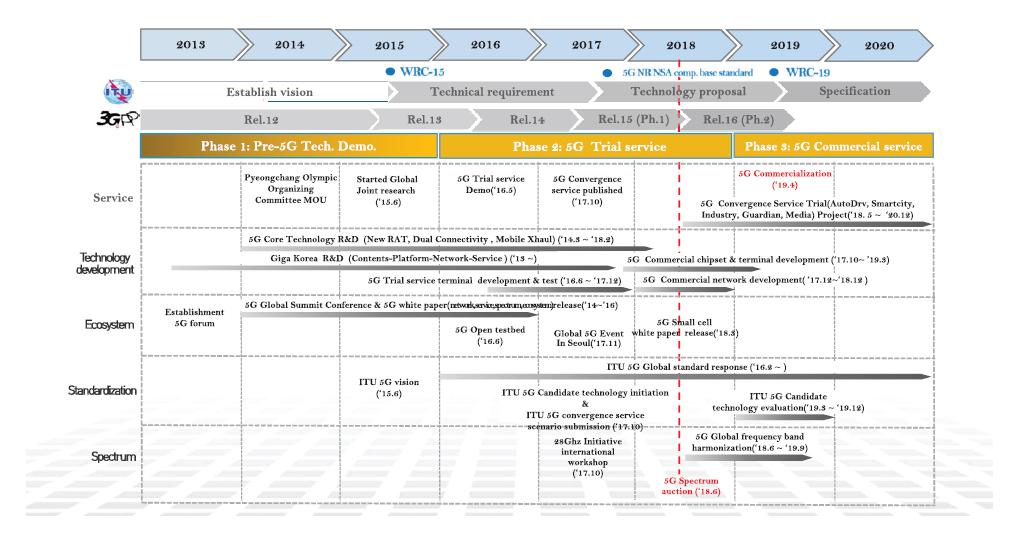 As of Oct. 2019, 62 operators from 34 countries started 5G commercial services with a limited footprint. Indeed, Korea is rapidly ramping up the infrastructure aimed at nationwide coverage. Ericsson's 2019 mobility report expected 13 million 5G subscribers by end of 2019 (where Korea counts for more than one third) and one billion 5G subscribers by 2023. In order to establish a global 5G ecosystem and promote the timely introduction of 5G, collaboration has played a key role in two tracks—joint promotion and joint research.

Its subscriber base showed rapid growth, surpassing one million subscribers less than 70 days after commercial release. As of Nov. 2019, 5G subscribers have surpassed 4.3 million, which is mainly due to their unprecedented subsidy, tariff plans offering more data than 4G, and attractive VR / AR content services. Figure 2 shows the 5G coverage of three operators, which keep ramping up in 85 cities and major highways by the end of 2019.

The carriers competitively launched VR, AR, and high-definition live streaming services applying 5G bandwidth improvements; handset manufacturers also introduced innovative technologies such as foldable phones and wearable terminals. Figure 3 shows some of the 5G applications of mobile operators. Figure 3(a) is the LGU+ baseball live service, where you can watch baseball games of KBO (Korean baseball league) in the view angle as you want with low latency, improving the sense of realism. Figure 3(b) is a location-based mixed reality (MR) zoo service that SKT provides at some of the public parks in Seoul, bringing a particular fictitious animal of high-quality video to the real-life environment over 5G networks of ultra-low latency graphic processing at the MEC. Figure 3(c) is KT Neck-band-360 that enables the live stream of the surrounding with 360-videos to give their friends virtual experiences. It can also be easily applied to private surveillance or public disaster relief. Recently, telecom operators either already started or plan to begin some streaming game service with global cloud giants. Though it takes time to evaluate how much users appreciate early 5G services compared to LTE, more real-time applications of immersive media continue to come into the market.

It is also interesting that heavy data users in LTE are consuming only around 65% more after having switched to 5G service. It pointed out that the B2C market has already saturated in the LTE. Many collaborations are happening now in Korea for developing B2B applications enabled by the Rel-16 infrastructure along with cloud infrastructure and the proliferation of edge services, such as autonomous vehicle V2X, C-ITS service, smart factory, and smart healthcare.

5G promises to open the service big-bang era, along with the combined technologies of AI inference capability, edge cloud computing, and industrial IoT. For Korea to brace for the age of service big bang, 5G Forum along with MSIT and Giga KOREA Foundation set up the six task forces on Dec. 2016 to develop 5G convergence service scenarios that will likely to be commercialized in Korea by 2030. Many experts from three operators, manufacturers, institutes, and academia were brought together and published the representative service scenarios in the fields of AI, robots, smart city, autonomous industry, media, and public safety sector in 2017. Among those service scenarios, the Korean government chose five of them, which eventually led to 5G industrial trials starting in August 2018.

Figure 4 shows five ongoing trials, their consortium leaders, and the city location of testbeds, which are autonomous driving, smart factory, 5G media, public safety, and smart city. Another new trial in the fashion industry is beginning this October. 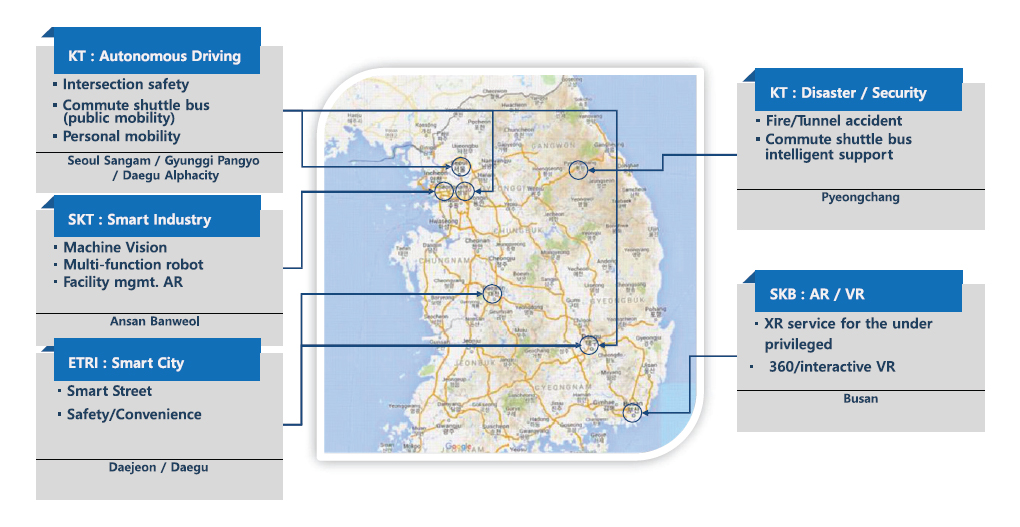 The 5G-enabled autonomous driving trial focuses on 5G V2X enabled bus, cloud-assisted remote-driving service, and URLLC-assisted traffic-control service, which includes the access of both 3.5GHz and 28GHz spectrum. The crucial use case of a 5G factory trial is 5G-enabled autonomous multifunction robots, which is being tested in the real factory. 5G smart city trials focus on wireless intelligent CCTV and drone service. 5G public safety trials focus on critical evacuation service in the tunnel accident, in-building fire, and collapse of infrastructures. 5G media focuses on remote medical care, live remote entertainment, and VR experience. It is particularly promising that the trial consortium made sure to develop 5G industrial prototype modules to apply 5G real industrial connectivity in their use-cases by the end of this year.

Last year, the government announced the 5G+ strategy to further promote 5G business trials, which invests $160 billion dollars in 5G industrial R&D by 2026. As the national SOC infrastructure ages after six years, the government plans to develop and expand the 5G friendly B2G business first in order to encourage the private sector to step in investment.

The 5G Forum keeps promoting the collaboration of government, ICT, and vertical industries, institutes, and academia to integrate 5G into the vertical industries. Finally, 5G Forum has already started laying out 6G vision. In fact, the 6G national project is slated to launch in 2021 and last for eight years.

Dong Ku Kim (dkkim@yonsei.ac.kr) is a professor at the School of Electrical & Electronic Engineering at Yonsei University, as well as chair of the 5G Forum executive committee, Seoul, Korea.

HyeonWoo Lee (woojaa@dankook.ac.kr) is a professor at the college of SW Convergence at DanKook University as well as a vice-chair of the 5G Forum executive committee, Seoul, Korea.

Seong-Choon Lee (sclee0328@gkf.kr) is the president of the Giga KOREA Foundation and a member of the 5G Forum executive committee, Seoul, Korea.

Sunwoo Lee (sunwoo.lee@kt.com) is the head of Infra Laboratory at the Institute of Convergence Technology and a member of the 5G Forum executive committee, Seoul, Korea.

Why You May Have a Thinking Digital Twin Within a Decade

Epic Versus Apple and the Future of App Stores