Most people who live in dictatorships are decent, so why are their leaders so bad? Is there a natural law stating if a country consists of mostly non-violent people and a small group willing to use force, then the brutes will win? Is there any way for the decent people to stop the brutes?

One answer is a robust representative democracy. Unfortunately, history is filled with examples (even current ones) in which a leader is democratically elected and then becomes a dictator over time. Representative democracy suffers from the loophole that one bad election can mess up everything.

Is there a way to make the world safe, to make it impossible for a would-be tyrant to exceed reasonable authority when the public starts to realize what has happened? The most straightforward way would be for all decisions to be made by referendum, but that is impractical, because governments make thousands of decisions per day and the public simply does not have the necessary information.

Here is a compromise proposal.

Make it possible for, say 1/3, of all representatives to call for a "counter-referendum" on any law that has been passed by the legislature. A counter-referendum is a vote by all the people to decide whether to let a law become active or remove it from the books. Making an electronic referendum (or any vote) cryptographically secure is a topic of active research—but suppose that it were secure and enforceable. 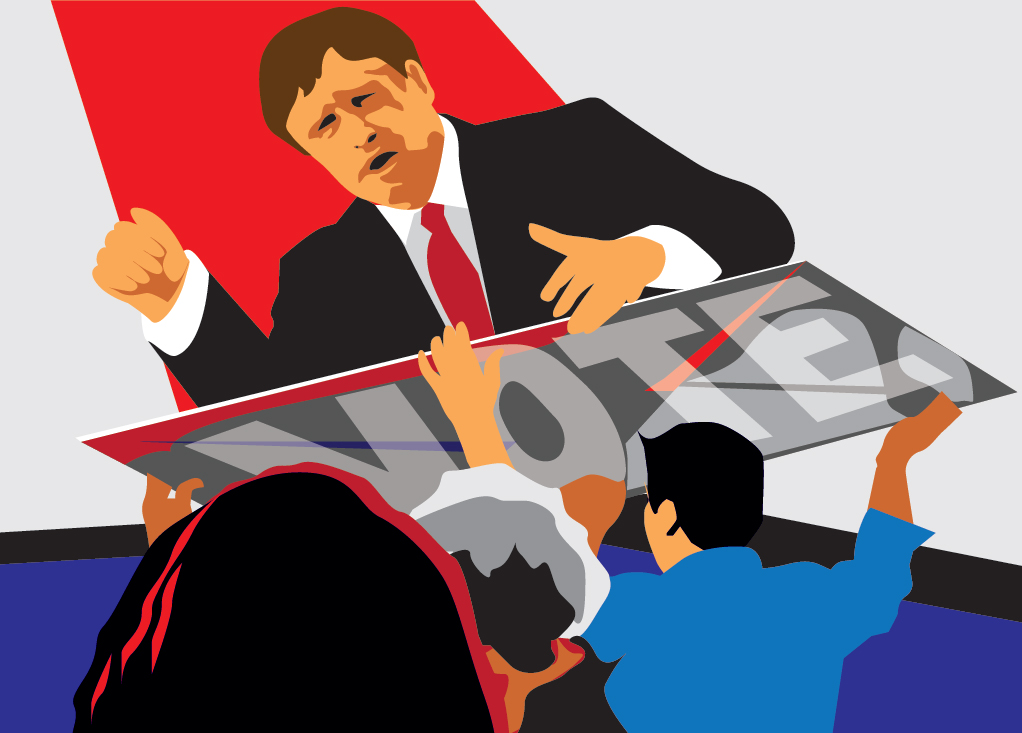 The majority of legislators decides when to vote (and presumably pass) each law. Once a law passes in the legislature, the minority must decide right away whether to put it up for a counter-referendum, which happens one month after the original passage. In that case, the law becomes active only if it survives the counter-referendum.

For the simplifying purposes of this puzzle, suppose both sides know the probability each law has of surviving a counter-referendum and those probabilities are independent. Trust me, the puzzle is difficult enough even then.

Solution: One possibility is for the minority to oppose only those laws with a 0.01 chance of surviving a counter-referendum. The minority has a 0.993 (approximately 97%) chance of stopping the election after the first three unpopular laws. Another interesting possibility is to contest some of the 0.999 laws, because if the minority wins on those, then there is the possibility of stopping more laws. However, that strategy runs the risk of losing three counter-referendums in a row. In either case, slightly more than five laws will be passed.

Question: Suppose the majority passes laws with survival probabilities 0.9, 0.8, 0.7, 0.6, 0.5, 0.4, 0.3, 0.2, 0.1 in that order. Which should the minority contest with counter-referendums to minimize the number of laws that become active? Recall the minority must decide which laws to contest as soon as they pass.

Solution (kind of): I do not have a good theory, so I wrote a program that explores the possibilities. Based on my program, the minority should ask for counter-referendums for laws starting with survival probability 0.6 and then the rest that have lower survival probabilities. In such a case, the expected number of laws that will pass is approximately 5.3.

Is there a natural law that says that if a country consists of mostly non-violent people and a small group willing to use force, then the brutes will win? Is there any way for the decent people to stop the brutes?

Question: Would the majority party be better off (in terms of total number of laws passed) if it permuted the order in which it passed these laws?

Upstart: Given a set of potential laws that the majority wants to pass, each with a probability of surviving a counter-referendum, what is the best strategy for the majority side to use in order to pass as many laws as possible, no matter how clever the minority is? The majority can order the laws in any order and may drop some.