Over the past decade, artificial intelligence (AI) based on machine learning has reached break-through levels of performance, often approaching and sometimes exceeding the abilities of human experts. Examples include image recognition, language translation, and performance in the game of Go.

These applications employ large artificial neural networks, in which nodes are linked by millions of weighted interconnections. They mimic the structure and workings of living brains, except in one key respectthey don't learn over time, as animals do. Once designed, programmed, and trained by developers, they do not adapt to new data or new tasks without being retrained, often a very time-consuming task.

Real-time adaptability by AI systems has become a hot topic in research. For example, computer scientists at Uber Technologies last year published a paper that describes a method for introducing "plasticity" in neural networks. In several test applications, including image recognition and maze exploration, the researchers showed that previously trained neural networks could adapt to new situations quickly and efficiently without undergoing additional training.

"The usual method with neural networks is to train them slowly, with many examples; in the millions or hundreds of millions," says Thomas Miconi, the lead author of the Uber paper and a computational neuroscientist at Uber. "But that's not the way we work. We learn fast, often from a single exposure, to a new situation or stimulus. With synaptic plasticity, the connections in our brains change automatically, allowing us to form memories very quickly." 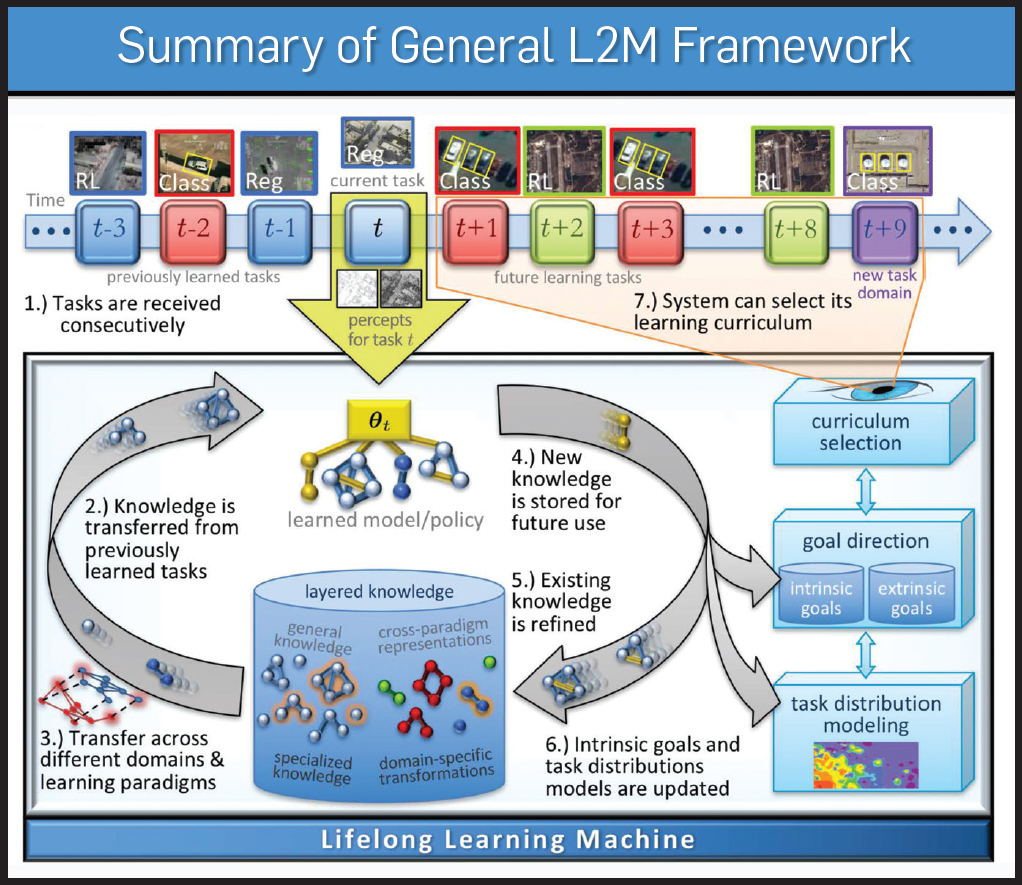 For more than 60 years, neural networks have been built from interconnected nodes whose pair-wise strength of connection is determined by weights, generally fixed by training with labeled examples. This training is most often done via a method called backpropagation, in which the system calculates an error at the synaptic output and distributes it backward throughout the networks layers. Most deep learning systems today, including Miconi's test systems, use back-propagation via gradient descent, an optimization technique.

"In a few years, much of what we consider AI today won't be considered AI without lifelong learning."

Using that as a starting point, Miconi employs an idea called Hebbian learning, introduced in 1949 by neuro-psychologist Donald Hebb, who observed that two neurons that fire repeatedly across a synapse strengthen their connection over time. It is often summarized as, "Neurons that fire together, wire together."

With this "Hebbian plasticity," networks employ a kind of "meta-learning"in essence, they learn how to learnbased on three conceptually simple parameters. Pairs of neurons have the traditional fixed weights established during the training of the system. They also have a plastic weight called a Hebbian trace, which varies during a lifetime according to the actual data it encounters. These Hebbian traces can be computed in different ways, but in a simple example it is the running average of the product of pre- and post-synaptic activity.

The Hebbian traces are themselves weighted by a third fixed parameter, called the plasticity coefficient. Thus, at any moment, the total effective weight of the connection between two neurons is the sum of the fixed weight plus the Hebbian trace multiplied by the plasticity coefficient. Depending on the values of these three parameters, the strength of each connection can be completely fixed, completely variable, or anything in between.

"This is important work," says Ziv Bar-Joseph, a computational biologist at Carnegie Mellon University who was not involved in the work at Uber. "They have taken a principle from biology that was well known and shown it can have a positive impact on an artificial neural network." However, it is too early to say whether the method will represent an important advancement in large, mainstream applications of AI, he says.

With most large AI systems today, Bar-Joseph says, "You optimize, and optimize, and optimize, and that's it. If you get new data, you can retrain it, but you are not trying to adapt to new things." For example, he says, a neural net might have been trained to give highly accurate results when classifying different kinds of automobiles, but when a new kind of car (a Tesla, say) is seen, the system stumbles. "You want it to recognize this new car very quickly, without retraining, which can take days or weeks. Also, how do you know that something new has happened?"

Artificial intelligence systems that learn on the fly are not new. In "neuroevolution," networks update themselves by algorithms that employ a trial-and-error method to achieve a precisely defined objective, such as winning a game of chess. They require no labeled training examples, only definitions of success. "They go only by trial and error," says Uber's Miconi. "It's a powerful, but a very slow, essentially random, process. It would be much better if, when you see a new thing, you get an error signal that tells you in which direction to alter your weights. That's what backpropagation gets you."

Miconi's ideas represent just one of a number of new approaches to self-learning in AI. The U.S. Department of Defense is pursuing the idea of synaptic plasticity as part of a broad family of experimental approaches aimed at making defense systems more accurate, responsive, and safe. The U.S. Defense Advanced Research Projects Agency (DARPA) has established a Lifelong Learning Machines (L2M) program with two major thrusts, one focused on the development of complete systems and their components, and the second on exploring learning mechanisms in biological organisms and translating them into computational processes. The goals are to enable AI systems to "learn and improve during tasks, apply previous skills and knowledge to new situations, incorporate innate system limits, and enhance safety in automated assignments," DARPA says at its website. "We are not looking for incremental improvements, but rather paradigm-changing approaches to machine learning."

Uber's work with Hebbian plasticity is a promising step toward lifelong learning in neural networks, says Hava Siegelmann, founder and manager of DARPA's L2M program and a computer science professor at the University of Massachusetts, Amherst. "We will never be safe in a self-driving car without it," she says. But it is just one of many necessary steps toward that goal. "It's definitely not the end of the story," she says.

There are five "pillars" of lifelong learning as DARPA broadly defines it, and synaptic plasticity falls into the first of these. The pillars are: continuous updating of memory, without catastrophic forgetting; recombinant memory, rearranging and recombining previously learned information toward future behavior; context awareness and context based modulation of system behavior; adoption of new behaviors through internal play, self-awareness, and self-simulations; and safety and security, recognizing whether something is dangerous and changing behavior accordingly, and ensuring security through a combination of strong constraints.

Siegelmann cites smart prostheses as an example of an application of these techniques. She says the control software in an artificial leg could be trained via conventional backpropagation by its maker, then trained to the unique habits and characteristics of its user, and finally enabled to very quickly adapt to a situation it has not seen before, such as an icy sidewalk.

A computational neuroscientist, Siegelmann says lifelong learning has been a goal of AI researchers for many years, but major advancements have only recently become feasible, enabled by advancements in computer power, new theoretical foundations and algorithms, and a better understanding of biology. "In a few years, much of what we call AI today won't be considered AI without lifelong learning," she predicts.

Miconi's team is now working on making learning more dynamic and sophisticated than it is in his test systems so far. One way to do that is to make the plasticity coefficients, now fixed as a design choice, themselves variable over the life of a system. "The plasticity of each connection can be determined at every point by the network itself," he says. Such "neuro-modulation" likely occurs in animal brains, he says, and that may be a key step toward the most flexible decision-making by AI systems.

Gary Anthes is a technology writer and editor based in Arlington, VA, USA

Columbia University is learning how to build and train self-aware neural networks, systems that can adapt and improve by using internal simulations and knowledge of their own structures.

The University of California, Irvine, is studying the dual memory architecture of the hippocampus and cortex to replay relevant memories in the background, allowing the systems to become more adaptable and predictive while retaining previous learning.

Tufts University is examining an intercellular regeneration mechanism observed in lower animals such as salamanders to create flexible robots capable of adapting to changes in their environment by altering their structures and functions on the fly.

SRI International is developing methods to use environmental signals and their relevant context to represent goals in a fluid way rather than as discrete tasks, enabling AI agents to adapt their behavior on the go.

Meta's Yann LeCun on His Vision for Human-level AI