Technical Perspective: Back to the Edge

"You may fire when you are ready, Gridley," is the famous command from Commodore Dewey in the Battle of Manila Bay, 1898. He may not have realized it, but he was articulating the basic principle of dataflow computing, where an instruction can be executed as soon as its inputs are available. Dataflow has long fascinated computer architects as perhaps a more "natural" way for computation circuits to best exploit parallelism for performance.

A visiting alien may be forgiven for experiencing whiplash when shown how we treat parallelism in programs. Mathematical algorithms have abundant parallelism; the only limit is data dependency (an operator can be evaluated when its inputs are available). We code it in a mainstream programming language (C/C++, Python, among others), which has completely sequential semantics (zero parallelism) to make sense of reads and writes to memory. As illustrated in Figure 1, compilers sweat mightily to rediscover some of the lost parallelism in their internal CDFGs (control and data flow graphs), and then produce machine code that, again, is completely sequential. When we execute this on a modern von Neumann CPU, wide-issue, out-of-order circuits once again sweat mightily (burning power) to rediscover parallelism. 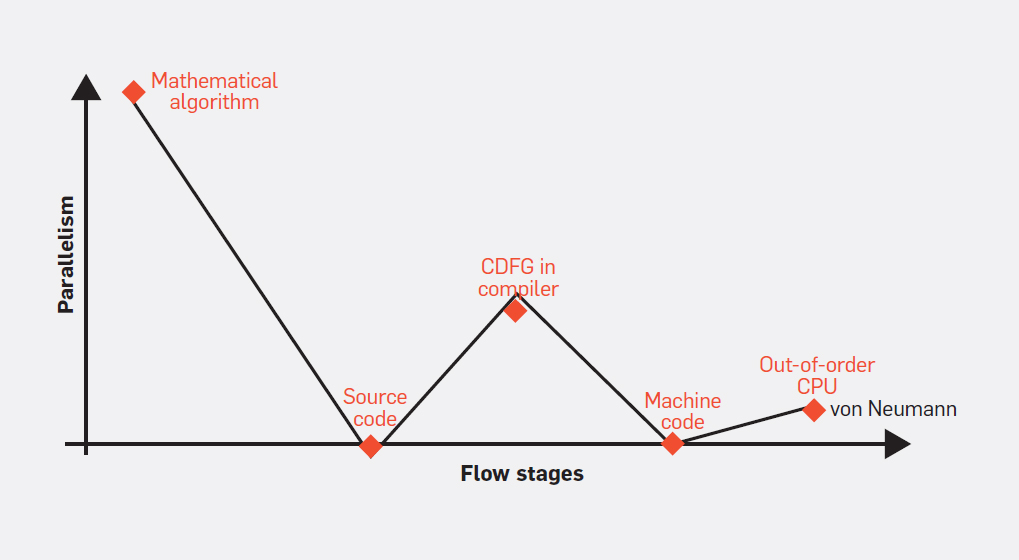 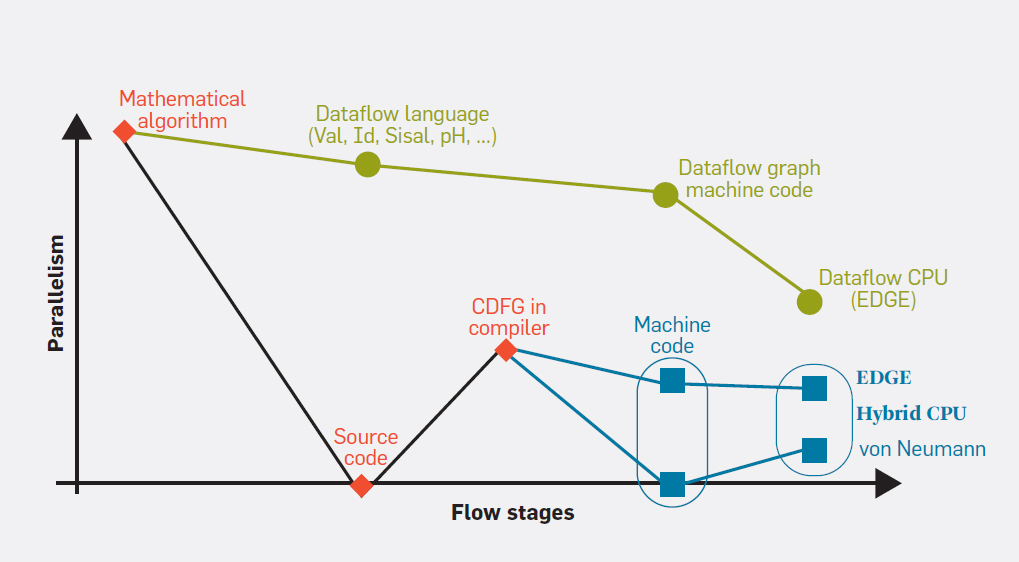 So, why aren't we all using EDGE machines today? A short answer is that they never quite mastered spatial or temporal locality and were subpar on inherently sequential code regions. In contrast, modern von Neumann CPUs excel at this, managing efficient flow of data between circuits that are fast-and-expensive (registers, wires), medium (caches), and slow-and-cheap (DRAMs).

The following paper by Tony Nowatzki, Vinay Gangadhar, and Karthikeyan Sankaralingam describes an innovative approach to exploit both models. From the CDFG, their compiler generates both traditional sequential machine code and a data graph, each being executed on appropriate circuits (blue squares in Figure 2), with efficient hand-off mechanisms. The authors describe extensive studies to validate the viability of this approach for existing codes.

EDGE computing is undergoing a renaissance, with many researchers pursuing related ideas. There are indications that big industry players are also contemplating this direction.a

Amazon Helping Researchers Study How to Dim the Sun

The AI in a Jar