Sometime in the early 1960s a young general manager of the Tata Electric Co. in Mumbai (then Bombay) visited the nearby Tata Institute of Fundamental Research (TIFR),a where India's first electronic-stored program computer resided. That manager, F.C. Kohli, began using the computer to optimize load dispatch operations for the city. Within a few years J.R.D. Tata, then chairman and doyen of the Tata group of companies, called upon Kohli to look after the new computing divisionTata Consultancy Services (TCS). That division soon began catering to clients both outside the group and outside Indiain Europe and North Americapioneering the 'offshore development' model.

In 2019, TCS revenues crossed $20 billion, ranking third after IBM and Accenture, and playing the role of a growth and transformation partner to large enterprises worldwide.8

In this article we focus on the unique role that research and innovation has played in TCS' journey from being the Tata group's computing division to its current place in global technology consulting. We shall highlight both some challenges faced along the way as well as lessons learned; the accompanying figure is a snapshot of this journey.

In 1981, TCS established a dedicated corporate research facility in Pune, the Tata Research, Development, and Design Centre (TRDDC).b It was headed by E.C. Subbarao, a prominent materials scientist from IIT Kanpur, who began applying computational materials engineering for Tata Steel, which then dominated the group's business. Indeed, research in TCS was joined at the hip with business from its inception.

Soon Kesav V. Nori joined TRDDC from TIFR and began adapting compiler technology to TCS' fledgling software services business, successfully automating many of the conversion projects that TCS won through the 1980s, for example, from one language/database to a more modern platform.

In the late 1980s, TCS was awarded a large, complex development project by SEGA, the Swiss financial depository, clearing and settlement organization. Such a project demanded computer-aided software engineering (CASE)3 tools, with research supplying the technology to capture system-level specifications from which code could be generated automatically. Later, in the early 1990s, Kohli felt there was an opportunity to develop a product for the Swiss private banking industry, and charged research with creating a new generation of CASE toolsMasterCraft.12 By employing code-generation, the banking product remained insulated from multiple generations of technology change. Today, .NET, Java, and Web versions of the product (TCS BNCS9 ) have also been instantiated even while its banking functionality evolved independently.

With the turn of the century, TCS research expanded beyond its core location Pune as well as its traditional areas: Security and bioinformatics groups were seeded in Hyderabad, embedded systems in Bangalore and later Kolkata, and architecture in Delhi. These new groups quickly began impacting TCS business: For example, when TCS launched iON,11 a hosted application platform for the SMB segment in India, a runtime configurable multi-tenant architecture6 developed by the architecture research group served as its initial technology base.

The 2000s saw a rapid growth in infrastructure management services, where TCS would manage entire datacenters and networks for large customers. This was traditionally a people-intensive exercise, but also turned out to be an excellent target for researchers to apply a variety of AI/ML techniques for automation. After many years of field deployment 'under the radar,' IGNIO,10 an AI-driven enterprise automation product developed in TCS Research, was formally launched in 2015.

Today, TCS Research covers a wide variety of areas (as listed in the figure) and is increasingly multidisciplinary. Many long-term investments are now actively applied to TCS' business; for example, marrying materials science research with machine learning to develop digital twins to optimize industrial operations,5 and with knowledge ontologies to complete the manufacturing 'digital thread.'2 Or combining metadata abstractions from our earlier software engineering tools with deep reinforcement learning to optimize supply chains and drive personalization in customer interactions.1 Further, TCS eats its own dog foodit has deployed a home-grown enterprise social media platform7 and more recently a deep-learning-based conversational system across all its 400K+ employees.c

There have been many lessons learned along this journey; we mention some critical ones here: First, research initiatives have always preceded their applicability, and so continuing to invest in research areas seemingly unrelated to the current business pays off in initially unforeseen ways. For example, research in genome-based early prediction of rare diseases4 later enabled TCS' business to build genome analysis pipelines for pharma customers. Deep expertise in computational chemistry3 is now allowing TCS to design new chemical formulations and molecules for customers, a very different kind of service that could potentially expand the very scope of its core business in the future. 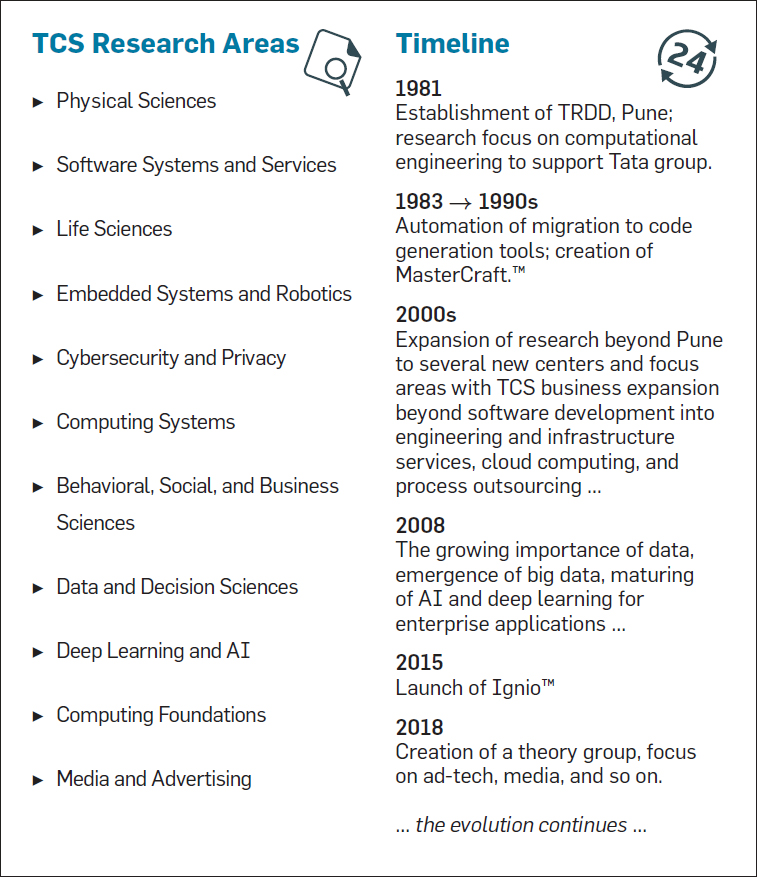 Second, translating research results into business outcomes not only requires careful shepherding, but also for research to evolve along with the business of the company: Just as IBM Research had to develop 'services science'd to support its emerging global services business, so too has TCS Research evolved, from initially using computer science to accelerate software development and IT tasks, to now applying a combination of both AI and domain research to transform product engineering, operations, and business models for its customers.

Last but not least, nurturing a vibrant research environment within a large and often independently successful core business becomes a challenge in itself. For many years, research was viewed as a luxury indulged in because one could afford it, that is, the foresight of investing in research was far from widely shared. Only hindsight shows indulgence paying off as the world itself is changing so rapidly, with every business increasingly becoming a technology business, across industry verticals.

To conclude, we submit the role of research for players in the technology services industry, such as TCS, is to act as the bridge between fundamental scientific advances (in computing and beyond) and transformative business ideas and product innovation for large enterprises that form their customer base.

Gautam Shroff (gautam.shroff@tcs.com) heads TCS Research and is based in Delhi, India.

K. Ananth Krishnan (ananth.krishnan@tcs.com) is Chief Technology Officer for TCS and is based in Chennai, India.

a. Tata Institute of Fundamental Research is a research laboratory funded and run by the Government of India.

b. TRDDC is now part of TCS Research.

Why You Can't Rebuild Wikipedia with Crypto