The most intriguing examples began as paradoxes or "thought experiments" that are hard to test experimentally. Physicists take them seriously because they challenge core concepts and may require revolutionary theoretical changes that could have practical consequences.

The Physics of Computation

The first hints that information has physical significance emerged in the 1800s, as researchers connected the somewhat mysterious thermodynamic quantity known as entropy to the information needed to describe a particular physical configuration. In this view, the progressive loss of information about an orderly initial state leads to the inexorable increases in entropy of an isolated system demanded by the Second Law of Thermodynamics, which constrains the efficiency of engines.

Beyond such statistical accounting, individual bits of information can have direct physical consequences, as illustrated by thermodynamics pioneer James Clerk Maxwell. He suggested that a "demon" that could see approaching molecules could merely open or close a trapdoor between two compartments of gas to let slow and fast molecules accumulate on opposites sides. The resulting temperature difference, seemingly without any entropy increase elsewhere, would violate the Second Law. (Maxwell's tricky creature also inspired the name of programs that operate behind the scenes in some operating systems.) 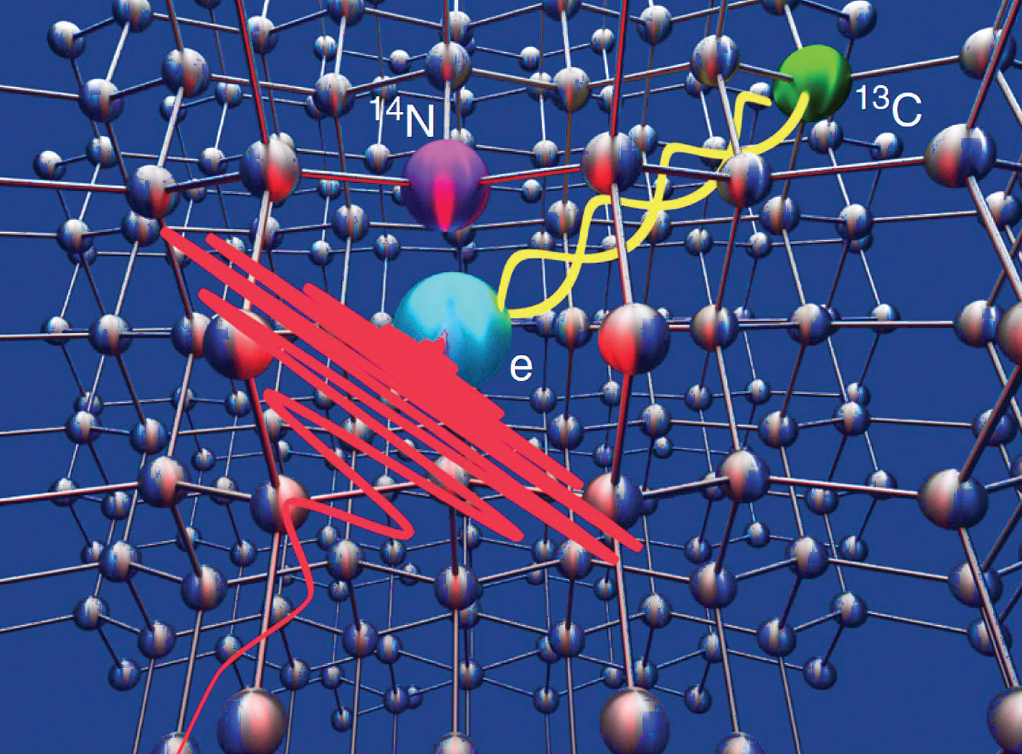 Figure. The lattice structure of carbon atoms in a diamond crystal contains a nitrogen-vacancy center with surrounding carbon nuclear spins. Researchers have demonstrated reliable quantum state transfer of photon polarization into a carbon isotope nuclear spin coupled to the nitrogen-vacancy center, based on photon-electron Bell state measurement by photon absorption.

Physicists resolved the paradox by noting that Maxwell's demon eventually would need to erase the information it had gleaned about the molecules, and that this erasure would create enough entropy to preserve the Second Law. Overcoming the erasure of one bit requires an energy expenditure of a few billionths of a picojoule (at room temperature). This puts a lower bound on the energy needed for computation, because the output of a logic gate usually compresses the information in its inputs. Fortunately, current electronics devices use millions of times more energy per operation, so the limit is not (yet) important practically.

Even this fundamental limit could in principle be avoided, however, by making all computations reversible, retaining enough information to reconstruct the original input. For researchers working on candidate components for quantum computers, this turns out to be immediately relevant, because these devices always operate reversibly, and this needs to be incorporated in circuit design.

Indeed, according to quantum mechanics, the mathematical evolution of any system is restricted to "unitary" transformations, which "basically means that whatever information you have, it always is there in some form," said theoretical physicist Brian Swingle of the University of Maryland. "Maybe it's very hard to read it out in some sense, but it's there."

Quantum information should still be conserved even when it is scrambled by interactions with the environment, which can be viewed as a larger quantum system. Although such interactions are often viewed as uncontrolled noise that causes "decoherence" that scrambles quantum information, quantum error-correction schemes exploit the overall reversibility of the combined system to ensure the desired information is preserved where it is needed.

Actually, "classical" (non-quantum) physics also follows microscopic equations that pay no attention to the direction of time. Indeed, physicists have long struggled to describe how such deterministic processes lead to the apparent loss of information embodied in increasing entropy, since the final state contains all of the details needed to reconstruct the initial state. "Information is just as preserved classically as in quantum," said Sean Carroll, a theoretical physicist at the California Institute of Technology (Caltech) in Pasadena, CA.

It is in the quantum realm, however, that information has raised the most profound conceptual challenges. This is most apparent in the field of quantum gravity, which aims to reconcile quantum mechanics and general relativity.

Traditionally, quantum mechanics plays out on a "stage" of unchanging spacetime, Swingle said. "If you try to make that stage dynamical, as happens in general relativity, where the geometry of spacetime is changing as a function of time, then combining those two things is hard."

The gravitational and quantum frameworks can usually agree to disagree, since they apply to very large and small scales respectively. However, their conflict becomes unavoidable for physicists studying black holes, which are both extremely massive and relatively compact. In this reconciliation effort, information plays a central role.

Once anything falls within a black hole's "event horizon," from which even light cannot escape, it should have no more influence on outside space. In particular, any information embedded in the infalling material is forever inaccessible. However, in the 1970s, Stephen Hawking of the U.K.'s University of Cambridge suggested that normally ephemeral pairs of particles that appear in the quantum-mechanical vacuum could be ripped apart at the horizon, with one sucked inside and the other escaping.

Figure. A schematic of the Maxwell's demon thought experiment.

One consequence of this escaping "Hawking radiation" is that the black hole will eventually evaporate completely. At that time (usually ridiculously far in the future), information that had been carried in would not just be inaccessible, but gone forever, violating the quantum rule that it is always preserved. Physicists argued about how to resolve this "black-hole information paradox" for decades, but they largely came to accept that the information was somehow carried away in quantum "entanglement" between different radiated particles. In 2004, Hawking famously agreed, conceding a bet with the California Institute of Technology's John Preskill.

The Universe as a Hologram

Important support for this consensus came from a tool proposed in 1997 by Juan Maldacena of the Institute for Advanced Study in Princeton, NJ. It is called the AdS/CFT correspondence because it allows a mathematical mapping between a particular model of spacetime (AdS) and a class of quantum models (CFT).

Intriguingly, although the gravitational and quantum systems are equivalent, the quantum system has one fewer spatial dimension, somewhat like the surface of the gravitational system. This is an example of a "holographic" universe, so called because it resembles the way that a flat holographic film can encapsulate a three-dimensional image. Black holes constructed in this idealized universe can evaporate while conserving information. Carroll said the hope is that looking at such explicit examples will "reveal general principles," although he stresses that other approaches should also be explored.

The AdS/CFT framework has also yielded other insights, including new ways to study complex quantum-mechanical systems like superconductors by looking at the corresponding gravitational model. It also revealed the surprising quantum error-correcting codes referred to at the start of the article, in which the surface information captures a subtle redundancy in the way information is encoded in the higher-dimensional bulk.

Hawking's concession did not end the controversies about black holes, because of ambiguity when one particle of an entangled pair falls in. Traditionally, this particle would remain entangled with its partner outside, sharing its quantum information. If this information is also carried away in the Hawking radiation, however, that violates a quantum rule known as "monogamy of entanglement."

For many years, physicists thought this conflict might be tolerable because no one could ever compare the information inside and outside, but in 2012 a group of physicists showed that this loophole fails right at the horizon. Instead, they proposed that passing through the horizon destroys the entanglement, creating a huge sheet of energy at the horizon known as the "firewall." This idea is repellent to many physicists, because a guiding principle for Einstein was that falling freely through space feels the same everywhere, with "no drama" at the event horizon. Other researchers have proposed other ideas, for example that the information carried in is conveyed to a different part of space by a "wormhole" and thus survives the evaporation.

These radical ideas, driven by the information paradox, threaten to restructure fundamental aspects of how physicists understand the universe. Although there remains no consensus on the resolution, Carroll said, it has "settled into something that many people agree is a problem."

As if wormholes were not exotic enough, Carroll, Swingle, and other physicists are exploring the idea that the entire structure of spacetime emerges from entangled quantum information. This alternative approach, sometimes called "It from Qubit," starts with abstract points, with no sense of space between them at all, said Swingle. "Then you start entangling them in some characteristic pattern, and that pattern can take on a geometric structure, in that you follow a link from one particle to another particle, eventually you have some sense of being able to go somewhere, some sense of distance, some sense of space."

Carroll, Swingle, and other physicists are exploring the idea that the entire structure of spacetime emerges from entangled quantum information.

This ambitious scheme remains a work in progress and may not prove successful, but there is no doubt that information will continue to guide fundamental thinking about physics. "Taking an information-theoretic point of view," Swingle said, can provide a "unifying framework to think about lots of different things. It's sort of a software versus a hardware view of the world."