In his 1998 book The Invisible Computer, user experience pioneer Don Norman predicted that general-purpose computers would one day give way to "information appliances": compact tools designed for specialized computational purposes, capable of communicating across a wide range of platforms.

Thanks to recent innovations in mobile processors, sensors, and image capture tools, Norman's vision now looks remarkably prescientnowhere more so than in the worlds of science and medicine, where advances in mobile technology are starting to yield lightweight, low-cost scientific instruments that promise to democratize access to a wide range of powerful diagnostic techniques.

Over the past few years, researchers have created smartphone-powered tools capable of taking blood samples, identifying viruses, analyzing water safety, and even sequencing DNA. Many of these instruments are already allowing scientists and medical professionals to gather and analyze data in ways that, until recently, would have required bulky and expensive lab-based equipment.

"Over the past decade we've seen enormous advances in the capabilities of smartphones," says Aydogan Ozcan, a professor at the University of California, Los Angeles (UCLA) who led an international team that created a smartphone-based microscope capable of analyzing DNA sequences in tissue samples with a level of fidelity comparable to that of a conventional microscope.

When Ozcan first started exploring the idea of a mobile phone-based microscope in 2006, his team created a specialized camera attachment capable of registering a red blood cellabout one-tenth the width of a human hair. Today, thanks to advances in smartphone lenses and processor power, Ozcan's team has been able to develop an Android-based system capable of registering a DNA molecule just two nanometers wide (about 500 times smaller than a red blood cell). 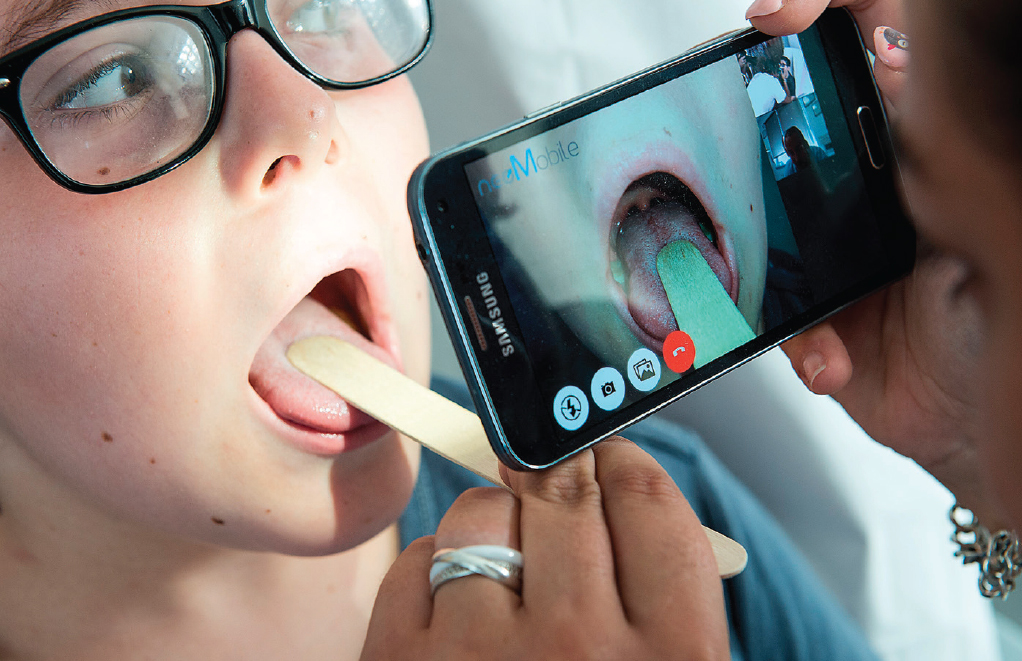 Figure. Say Ah: An off-site doctor examines the throat of a child via smartphone during a digital medical consultation.

The device works by taking multiple different images of a tissue sample, which it then feeds into an algorithm that analyzes the images using fluorescent dyes to sequence the DNA bases and look for genetic mutations inside the tumor. The researchers claim the device can identify even miniscule signs of cancer among a large group of cells.

The team prototyped the device using a three-dimensional printer, and estimates the smartphone-based microscopes could ultimately be produced for less than $500 per unita fraction of the $10,000 to $50,000 that a traditional high-end microscope would typically cost.

At that price point, the device could bring molecular diagnosticswhich are typically performed in centralized laboratories at major hospitalswithin reach of remote doctors' offices, and eventually consumers. The microscope could also have a wide range of other applications for biotechnology and nanotechnology research in remote environments.

"This transformation is really helping us become competitive with things that are normally done in advanced labs and professional settings," says Ozcan. "This is about the democratization of measurement, science, and diagnostics."

At Washington State University, a team of researchers led by Lei Li has created a smartphone-based spectrometer capable of analyzing blood samples for a specific biomarker known as human interleukin-6, commonly associated with lung, prostate, liver, and breast cancers. The device could also allow users to conduct spectrophotometric analysis for a variety of purposes including food safety, water quality, and other types of environmental analysis.

Spectrometers measure the light spectrum to gauge the amount and type of chemicals present in a given sample of material. But even today's powerful smartphone cameras were never intended for this kind of intensive optical analysis.

"The camera was never designed for sampling," says Li. "It was designed for taking pictures at a distance." To compensate for the limitations of tiny lenses, Li and his team fashioned a special prism array capable of dividing incoming light into waves for processing. Most of the technical challenges came in trying to fabricate the prism array itself; the software application was comparatively easy to develop using standard image processing routines.

In the past, large hospitals would have expected to pay up to $500,000 for a top-of-the-line spectrometer; a more basic model might run as little as $10,000. While Li's device won't fully supplant those kinds of machines, it could make spectrometer-based analysis available to smaller hospitals and clinics in rural areas or developing countries, thus bringing the technique within reach of patients who might otherwise never have access to this kind of diagnostic capability.

At the University of Washington, a team of doctors and engineers partnered to create a smartphone-based device called BiliCam that allows doctors and new parents to identify signs of jaundice, a common affliction of newborn babies.

The system consists of an app that invokes a standard smartphone camera and flash, along with a printed card used to calibrate color with a range of different lighting conditions and skin tones. By taking a photo of the baby's skin in proximity to the card, a parent or healthcare provider can then use the app to submit the photo to a cloud-based system that analyzes the data using machine-learning algorithms, then generates a report on the baby's bilirubin levels that it can send back almost instantly to a parent's smartphone.

Beyond image-processing applications, the sheer computing power of smartphonesthe Samsung S7 handset now boasts far more processing power than a supercomputer from the mid-1990sopens the door to a wide range of other pocket-sized scientific instruments.

At the University of Washington, a smartphone-based device allows doctors and new parents to identify signs of jaundice, an affliction common to newborn babies.

In the U.K., a company called Oxford Nanopore Technologies builds compact devices known as nanopore sequencers for genetic analysis; they utilize a highly cost-effective approach that allows a single molecule of DNA or RNA to be analyzed via electrical conductivity (as opposed to more resource-intensive solid-state methods). The method makes genetic sequencing more readily available to researchers for a wide range of purposes: identifying pathogens in food or water, monitoring environmental conditions for climate science, or even sequencing the human genome. Nanopore sequencing also holds promise for a wide range of other scientific applications including plant research, population genomics, and microbiology.

In 2014, the company released MinION, a nanopore sequencer that weighs under 100 grams and plugs into a PC or laptop via a USB cable. With prices starting at $1,000, the device is making genetic sequencing widely available to a range of researchers who might not otherwise have access to sequencing technology. It has already been used for surveillance of Zika in Brazil and Ebola in Guinea, and has even found its way onto the International Space Station.

Oxford Nanopore is now taking this work a step further with its as-yet-unreleased SmidgION, a sequencer attachment that snaps onto a smartphone running specialized software.

The proliferation of mobile processing power will not only make high-powered scientific instruments more readily available to researchers, but should also eventually yield simpler diagnostic tools within reach of everyday consumers.

Dr. David Bello of Florida-based Orlando Health has developed a smartphone-based stethoscope that retails for less than $50. Using a small sensor device that connects to a smartphone via its headphone jack, the system can capture a user's heartbeat and project a visualization of it onscreenpotentially offering consumers an easy-to-use tool for monitoring their cardiac health.

Since 2013, a team of researchers at Cornell University have been developing a portable tool that analyzes blood samples for nutritional deficiencies, with results sent to a mobile phone in about 10 minutes. The developers, who have moved the technology to global health startup VitaScan, hope the device could one day make this kind of testing available throughout the developing world.

"The high cost and difficulty of assessing malnutrition has made it such that most people are not aware of it until they get sick," he says.

The VitaScan system relies on a small standalone diagnostic unit that can analyze a blood sample collected via a finger prick. The unit then communicates wirelessly over the Internet with a server-based application that can then transmit results to a user's smartphone. While in principle such a device could connect directly to a smartphone, FDA regulations preclude putting smartphones in close contact with biological fluids for safety reasons.

Since 2013, Cornell University researchers have been working on a portable tool that analyzes blood samples for nutritional deficiencies.

The company is planning to release its product initially to doctors' offices and clinics, before expanding into the consumer market, where Li sees an opportunity for VitaScan to take its place within the larger ecosystem of personal health and nutrition applications.

"It's more than just processing power," he says. "The ubiquity and personalized nature of smartphones have helped drive the growth of personalized nutrition." 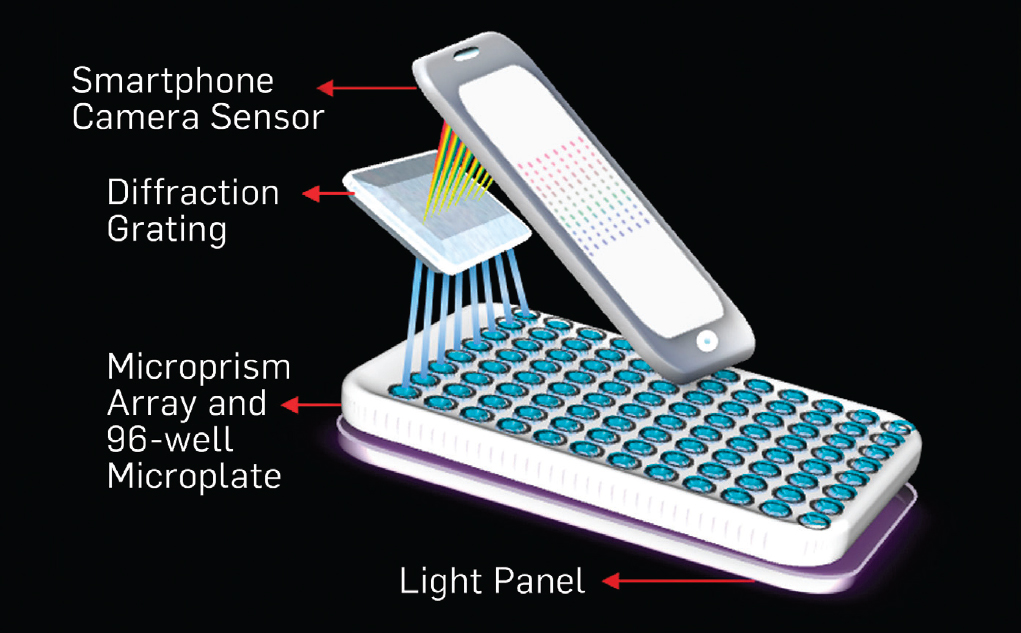 For a health-conscious consumer, a tool like VitaScan could form one component of a self-administered health and wellness regimen, with the user's smartphone corralling and synthesizing input from multiple sources like a diet tracker, fitness monitor, or any number of other information appliances.

With so many of these smartphone-based scientific instruments coming to market, we may be witnessing a maturation of the underlying technologies, like processors, optics, and fabrication methods. As is so often the case in computing, last year's innovations become this year's infrastructure.

Looking ahead, the next wave of experimentation may have less to do with the instruments themselves and more to do with finding the right pathways to market.

"There are still lots of improvements to come to the core technologies, but the next wave of real innovation will come with applications," says Ozcan. "Now it's time to harness the power of what we've achieved."

Alex Wright is a writer and researcher based in Brooklyn, NY.