Why Virtual Reality Will Transform a Workplace Near You

Collaboration is in. From offices with open floor plans to new apps that promise to reinvent messaging and collaboration, companies find it buzz-worthy and attractive to the bottom line when their teams work better together.

Yet in the next few years, none of these companies may matter at all. That is a bold claim, but one that will come true sooner than anticipated if champions of virtual reality (VR) and augmented reality (AR) technology have their way.

VR places users in a virtual world, typically via a headset that immerses them fully in a digital environment. AR, however, lays digital visuals over what you see in the real world. Neither is new, but only recently have the technologies become affordableand powerful enoughfor adoption by consumers and businesses, thanks to advanced VR systems like the Oculus Rift.

The Rift headset immerses the user in a digital world to a degree unseen in the VR tech of the 1990s and early 2000s. Oculus' quality of VR was so impressive, the company was bought by Facebook for north of $2 billion in 2014.

At the other end of the spectrum, simple but popular apps like the smash-hit Pokemon Go put AR in the hands of anyone with a smartphone. In Pokemon Go, users hunt cartoon monsters in the real world, walking around their communities and interacting with digital content laid over real images captured by their smartphone's camera. While the app does not match Oculus' degree of realism, it became wildly popular nonetheless, breaking Apple's App Store record for most downloads in a week. 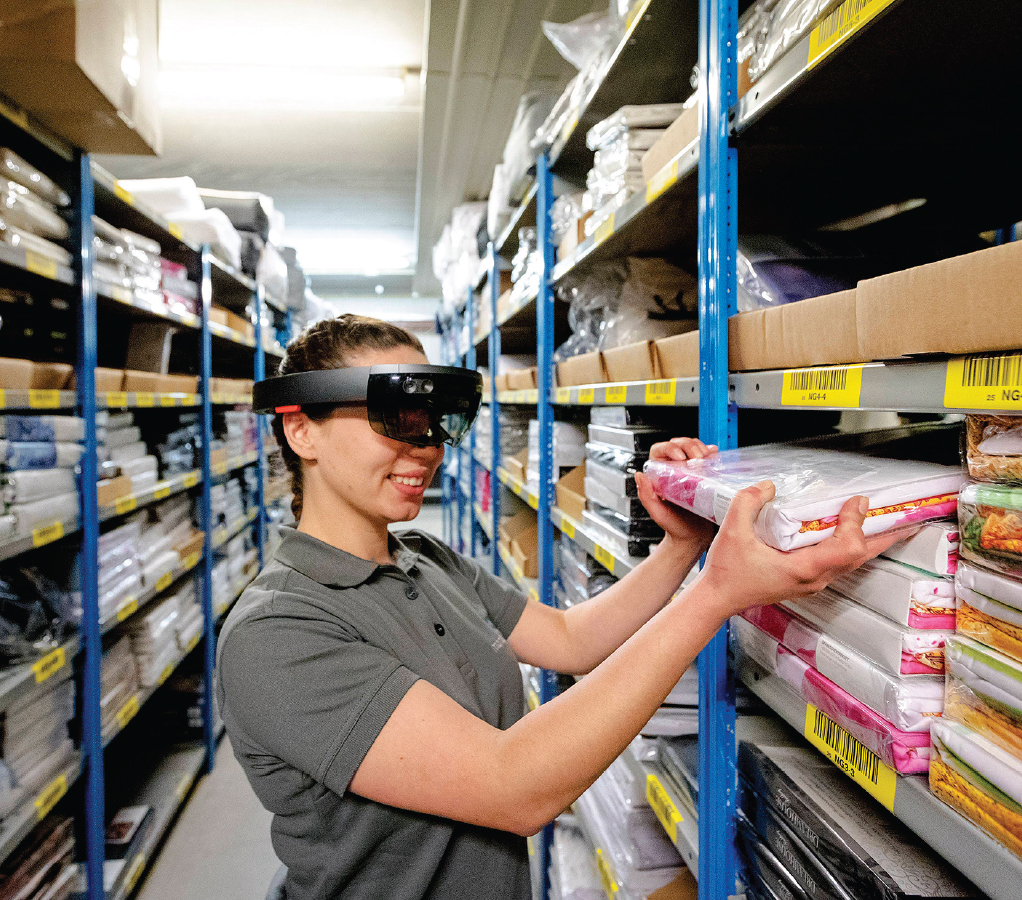 Figure. Microsoft's Hololens in use in a warehouse facility in The Netherlands.

Facebook's investment in Oculus jolted companies into action, sending a market signal that VR was here to stay. Pokemon Go's popularity proved that users were comfortable withand even keen onAR experiences. Companies like Microsoft, HTC, and Sony have acknowledged VR and AR's potential, too; each company has its own consumer-facing VR and AR hardware.

Except it's no longer just for fun and games; thanks to relatively cheap and better technology, VR and AR are poised to transform how we work.

VR and AR companies see the technology as the natural evolution of popular collaboration apps; instead of desktop interfaces or pinging phone apps, however, they envision a world in which we collaborate with coworkers and peers in highly realistic virtual or virtually augmented environmentsa more immersive, versatile, and natural way to get business done.

This is no pipe dream like the VR of decades past. Thanks to the commercial viability of popular systems and apps, ambitious VR/AR products are already changing how professionals work, train, and cooperate. Company reps use the technologies to better train for customer-service interactions and to troubleshoot issues faster in real time using digital models. Manufacturers rely on the technology to better collaborate on the design and maintenance of components, and hospital systems employ VR and AR to remotely train doctors faster, less expensively, and more effectively.

This is just the beginning. Your next meeting might take place in a VR environment that makes it easier to identify who's speaking and how others feel about your ideas (if Peter Diamandis' company High Fidelity, which creates "open source software for creating, hosting, and exploring shared VR experiences," has its way). Entire collaboration exercises or corporate retreats might be hosted in virtual environments (courtesy of technology like that offered by AltspaceVR, a virtual reality software company building a new communication platform already used by people in more than 150 countries) Training on everything from operating equipment to combatting sexual harassment at work could become a lot easier and more effective, thanks to VR in the workplace.

"Phones will disappear," predicts Ajay Shah, cofounder and business development head at Dotty Digital, maker of the first collaborative environment for working on three-dimensional (3D) models over a Web browser, a system which includes AR components. "Everything is moving to wearable tech and everything will be viewed with AR, so you can still capture your true environment. Everything will be synced from voice commands and eye tracking with potentially a watch for touch. The tech already exists."

That tech could make your workplace very different from the one you know today.

Dotty's AR solutions work with smart-glasses from ODG, which raised the largest Series A (first significant round of venture capital financing) in wearables when it scored $58 million in 2016. Thanks to Dotty's tech, users see 3D models projected on their lenses; they can then collaborate digitally with other users viewing the same model or visuals, completely hands-free. Right now, Dotty sees the biggest use cases in retail, oil and gas, and manufacturing workplaces.

Such technology can change how retailers work and consumers shop. As an example, the company's 3D scanning app could be used by a sunglasses retailer to scan customer faces and digitally overlay different styles of shades. That fundamentally alters how service reps do their jobs; instead of answering sizing or availability questions, reps can provide higher-level consultations that require more training, but also increase the perceived value of the product or service they are selling.

Collaborative 3D models could change how manufacturers work, too. Instead of a field engineer constantly traveling between locations, she could troubleshoot machinery and refine product designs in real time, in tandem with colleagues back at the home office, from anywhere in the world using Dotty's collaborative AR environment. In turn, she could scale herself far more effectively, changing how her colleagues do their jobs and how her company hires.

Thanks to the commercial viability of popular systems and apps, ambitious VR/AR products are already changing how professionals work, train, and cooperate.

This becomes even more compelling when the sensors and smart machinery that comprise the Internet of Things (IoT) enter the picture. The company's DottyView product works with Autodesk CAD software to visualize assets in 3D, along with live data from that equipment or vehicle's sensors. For instance, a ship captain could view a 3D model of his vessel complete with real-time status reports on various components. From there, problems could be diagnosed and solved from thousands of miles away. In an industry like commercial shipping, this reducesor eliminates completelythe need for costly, time-consuming ship inspections that take place in all types of weather and conditions, including dangerous ones.

"These types of AR solutions allow remote workers to coordinate in real time on complex models and assess solutions much quicker for field teams," says Shah.

Workers Without an Office

AR and VR in the workplace can be life-changing, especially when your workplace is a hospital tasked with saving lives. Osso VR is a surgical simulation platform that trains residents and helps veteran surgeons warm up for procedures in a highly realistic virtual environment.

"During my surgical training, I noticed that healthcare providers mainly learned their technical skills on the job, often taking the expression 'see one, do one, teach one' quite literally," says Justin Barad, cofounder of the company and a board-certified orthopedic surgeon. "This led to frequent situations where teams didn't seem to be as proficient as they could be during certain procedures because of a lack of knowledge and experience."

Users practice specific procedures using Osso VR and a set of controllers that track hand movements. That speeds up how surgeons go about their work.

"If I want to learn about a new technique or device, I typically will attend a course," explains Barad. "These are usually weekend affairs in a remote location, sometimes even across the country. Finding the time to make it to one of these courses is difficult as surgeons barely have enough time outside of the hospital as it is."

With a system like Osso VR, hospitals and healthcare systems can ensure these professionals are completely prepared and confident before they perform life-and-death procedures, reducing the likelihood of mistakes and improving outcomesall with a fraction of the time and hassle required by in-person training.

Yet AR and VR in the workplace do not need to save lives to improve them. Atheer creates AR/VR hardware and software solutions for deskless employees. The company's AiR Suite provides visual and non-interruptive collaboration, communication, and workflow management on commercially available smartglasses. The result? Workers can collaborate with headquarters without taking their hands, or eyes, off the job in front of them.

The company also manufactures its own smartglasses that are compatible with the system, the AiR Glasses. Powered by the Android operating system, the glasses connect to Wi-Fi, Bluetooth, and 4G LTE for maximum access to digital information in the field. Workers control applications displayed on the glasses using hand gestures, head movements, and voice commands.

The company cites applications in logistics/warehousing, construction, and industrial sectors as target sectors for the technology. These industries share commonalities: field workers who need to learn and communicate, but who may not have the ability to use a mobile device or on-site machine to do so.

Then, of course, there are the companies who want to be the new Slack (that is, a popular collaboration solution), but for VR.

Software from AltspaceVR gives companies and individuals the ability to connect with others in a shared digital environment. Using a VR headset like the Oculus Rift, HTC Vive, or Samsung Gear VR, users can visually brainstorm like they are in the same room, or conduct more natural meetings than otherwise possible through video or voice conferencing.

A ship captain could view a 3D model of his vessel with real-time status reports on various components. From there, problems could be diagnosed and solved from thousands of miles away.

"A good portion of our team is remote and we're already seeing VR become useful as a productivity tool," says Barad at Osso VR. "We often have our daily meetings in VR. This allows us to function like we're all in the same physical space.

"I can see this supplanting video-conferencing in the near future."

McGhee, B.
How VR Will Change the Workplace, AndroidPit, February 9, 2017, https://www.androidpit.com/how-vr-will-change-the-workplace

AI Is Transforming How We Bank