Like many other technologies, hearing aids have improved rapidly over the last two decades.

Digital audio processing has enabled more sophisticated and personalized features, and users report higher satisfaction. Still, in noisy social situations such as cocktail parties, hearing-impaired users must work hard to track the conversation of companions, just as someone with normal hearing may struggle to follow a lively conference call.

Researchers and companies continue to advance the technology by understanding how listeners process a complex "auditory scene," which requires more than just amplifying sounds. "Restoring audibility is simply not enough," said Christine Jones, director of the Phonak Audiology Research Center in Warrenville, IL. "There's a loss of fidelity that prevents individuals from having full restoration of function even when the sound becomes audible again."

Research also has shown that people process sound in different ways, so the "best" hearing aid technology will differ, too. Even as researchers struggle to measure these differences, companies are providing new ways to address them and to develop fitting procedures and user controls that work best for each individual.

Digital signal processors (DSPs) were first used in hearing aids in 1996. In the ensuing years, almost all hearing devices adopted them because of their flexibility in providing programmable features.

For example, simple amplification makes soft sounds perceptible, but loud sounds uncomfortable. DSPs make it easy to adjust both the gain (sound boost) and the dynamic-range compression to match an individual's hearing loss at different frequencies. DSPs also suppress the feedback that arises from the close proximity of microphone and speaker, and can reduce distracting background noise, such as wind. 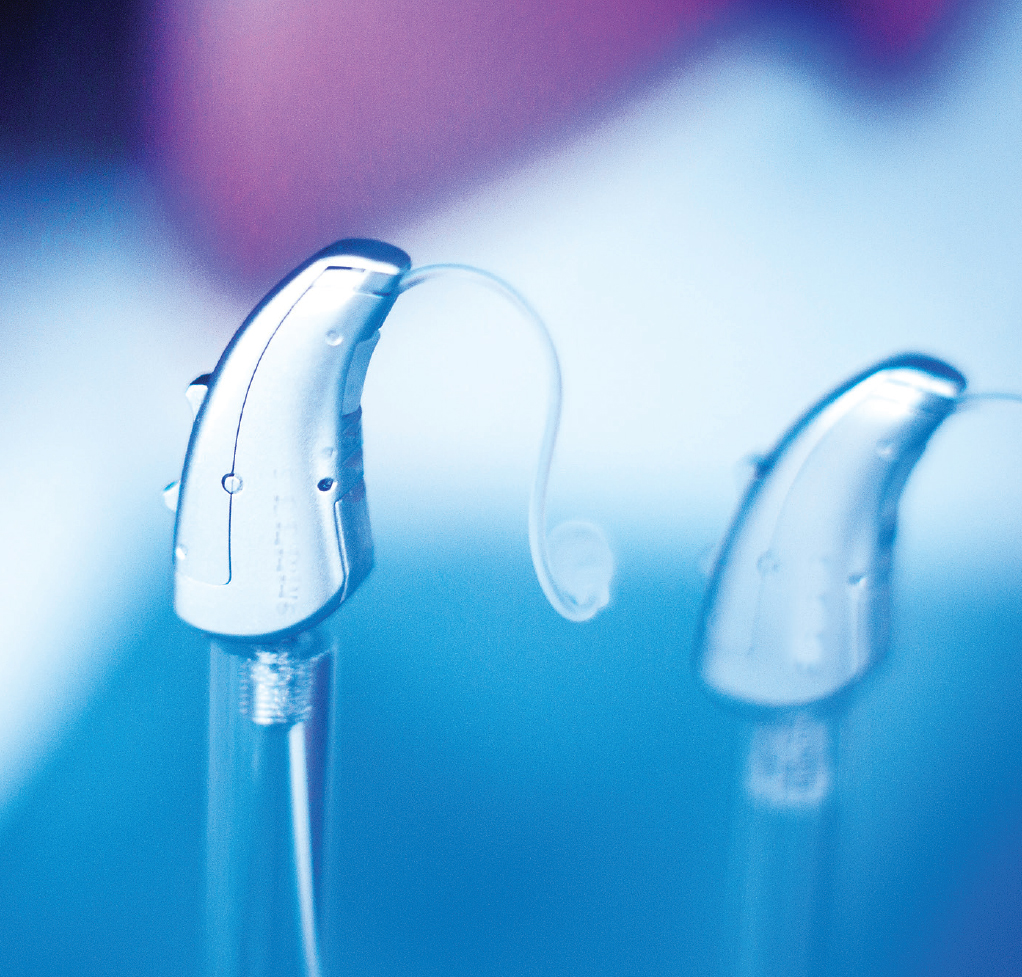 Figure. The Earlens Light-Driven Hearing Aid converts sounds into pulses of light, which activate a lens on the eardrum.

In recent years, hearing aid companies also have introduced frequency-lowering technology. Patients with extreme hearing loss at high frequencies can benefit when sounds are shifted to frequencies where they still have some function, said Brent Edwards, CTO of Earlens in Menlo Park, CA. "It's a distortion, but if you do it effectively, you can get some phonemes still through the damaged auditory system."

Hearing researchers have explored other processing strategies over the years, but many of them remain in the labs because of the severe design constraints posed by small device size and the need for low power consumption to preserve battery life. In addition, processing must be done with very limited delay, especially because the processed signal must coexist with sound passing through bypass channels that avoid uncomfortable ear-canal blockage.

In special situations, engineers can dramatically improve listeners' experiences by incorporating external devices. For example, asking conversation partners to clip a microphone on their collar greatly reduces background noise, and combining the output of several microphones on a table can enhance a particular speaker. External loudspeakers, as at a business, may also provide a more compelling spatial perception of sound than in-ear microphones. Yet everyday use still requires small, low-power devices.

One useful type of external device that many people already carry is the smartphone. A Bluetooth connection to a phone app gives users a richer and more intuitive interface, for example, even with a low data rate. A more bandwidth-intensive approach offloads some signal processing to the phone, with its larger battery and higher processing power, but long delays are unacceptable.

Although increased processing power has clearly benefited hearing aid technology, designs must extend beyond electrical engineering to encompass the complex and idiosyncratic ways that people process and interpret sounds. A particularly influential concept is auditory scene analysis, which posits that people perceive sound not as frequencies but as individual sources, each emitting waveforms with similar attributes. In this view, hearing aids should preserve or accentuate the cues that let a listener identify and attend to sources of interest while disregarding others.

As a step in that direction, hearing aid companies often categorize the sound environment and vary the processing algorithms accordingly. "We have at least 12 different attributes we look at," including the frequency spectrum, the modulation characteristics, and the angle of the sound deduced by comparing two microphones, said Francis Kuk of the Office of Research in Clinical Amplification (ORCA-USA) of Widex, in Lisle, IL.

"As you develop new technologies, you have to develop new ways of measuring its benefit. That's part of what engineers don't understand about hearing loss."

Based on these parameters, Widex will predict that the environment contains music, speech in a quiet environment, speech in a train station, or other settings. The inferred scene then determines the default parameters of the hearing aid, such as the noise reduction for a noisy environment.

The auditory scene can also be used to modify beamforming, which wirelessly combines audio signals from both earpieces. The technique can enhance sounds coming from straight ahead, for example, because they arrive at the ears in sync. "It's one of our most effective features," says Jones, but "we have different levels of beamforming depending on the scene." As background noise increases, for example, the effective beam is made increasingly narrow. But if a car scene is detected, the beamforming is turned off, because speakers may well be to the side or behind the listener.

There are limits to such automated selection of algorithms, however, due not only to varying preferences of individuals, but to differences in how their brains process sound.

One feature that helps distinguish sources in an auditory scene is the overall modulation of the auditory signal, Kuk said. Some people, particularly those with both hearing impairment and cognitive limitations, "are more reliant on the temporal waveform" to identify a source, for example when different frequencies get louder at the same time. Hearing aids that respond rapidly to protect users from sudden loud sounds distort the temporal waveform, making it difficult for these listeners to use this important cue.

The effort and attention required to decipher speech can be exhausting for hearing-impaired people, but that is not easy to assess. "We used to say speech understanding and sound-quality assessment were the two measures of what a technology was doing. Now we can add a third dimension, and that's cognitive impact," said Edwards. "Some technologies may not improve speech understanding that much, but reduce cognitive load."

Edwards said the "hottest topic in hearing science right now" is called "hidden hearing loss," in which patients lose some of the normal nerve connections. "It's like losing half the pixels on your high-def TV," he said, but it does not affect the audibility of pure tones.

The standard test of detection threshold "is not telling you, say in a restaurant, how salient the representation of the auditory scene is," Edwards warned. "As you develop new technologies, you have to develop new ways of measuring its benefit," he said. "That's part of what engineers don't understand about hearing loss. There's a lot about the individual patient that we can't tell from the diagnostics."

Fine-tuning settings is already a key aspect of "fitting" of a new hearing aid by a trained audiologist, which contributes to the devices' price. Edwards compares this process to improving a TV picture by yelling instructions to a technician who can't see the picture. "What people are now doing is developing systems where the patient can make adjustments themselves," he said. "There has to be a balance between diagnostic-driven fitting by a professional and this sort of self-adjustment."

"We've done a really good job now of creating algorithms that work on average, based on the degree and configuration of the hearing loss," said Jones, who has practiced as an audiologist, including fitting hearing aids to pediatric patients with limited communication skills. "But two patients who present with the same hearing loss could have very different levels of functional auditory behavior. There's still room to do some fine-tuning based on their own personal capabilities."

In light of the high price of current hearing aids (which can cost as much at $4,000 per unit), there is increasing pressure to open the market to cheaper over-the-counter (OTC) devices. Lowered regulatory requirements, advocates suggest, might encourage companies like Dolby and Bose to leverage their expertise in entertainment audio for personal devices.

"I support creating an OTC category, as long as it doesn't affect the traditional distribution and provision of hearing aids," Edwards said. Kuk cautioned such over-the-counter products are unlikely to have the advanced capabilities of medically-approved hearing aids like those his company offers, and may instead resemble the generic reading glasses sold in drug stores.

"As an audiologist, I believe that for many people with hearing loss, taking something off the shelf will not do the best job," Jones agreed, although patients with limited impairment may find such devices helpful. "There are still people that benefit from the ability of an audiologist to more closely fine-tune the amplification and the behavior of the hearing instruments to both their hearing loss and also their lifestyle needs."

In spite of steady advances in hearing aids, users still struggle to distinguish voices in a hubbub of other voices, said DeLiang Wang of Ohio State University. "Every hearing-aid company recognizes that the cocktail-party problem is not solvedand needs to be solved."

In the laboratory, Wang and his colleagues divide the audio stream into 20ms-long segments in various frequency bands, and ask whether each segment contributes to the speech of interest or can be disregarded as noise. A similar binary classification and masking is used to make MP3 audio encoding more efficient. "Once you have formulated it as a classification problem, then modern machine learning techniques can be utilized; in our case, deep neural networks," Wang said. Lab testing shows that masking the "noisy" time-frequency segments significantly improves listeners' speech comprehension.

If research like this can be exploited in practical devices, it could work with listeners' brains to help extract specific sources from a complex audio scene. But when speech is also the noise, Jones said, "there's no acoustic separation, other than direction and maybe level, between your target and your interference. That is the challenge."

In spite of these aspirations for the future, "the satisfaction rate for hearing aids today is much, much higher than several years ago, and especially before digital hearing aids," Kuk said. Industry-sponsored surveys show that "almost 90% of patients who wear today's hearing aids are satisfied," he explained. "Having said that, satisfaction is a moving target. As technology improves, people's expectations for what a satisfying hearing aid is also increases."

Edwards, B.
A Model of Auditory-Cognitive Processing and Relevance to Clinical Applicability, Ear & Hearing July/August 2016, http://bit.ly/2rX9DpQ

Don Monroe is a science and technology writer based in Boston, MA.

Reward Is Enough for Generalized AI