One of my favourite things about teaching is that students supply and endless stream of surprises. I have just finished marking my first year university students’ portfolios for their Second Life and Linden Script module, having spent a happy few days interacting with flying pigs, self-generating slices of pie, and grumpy wolves. 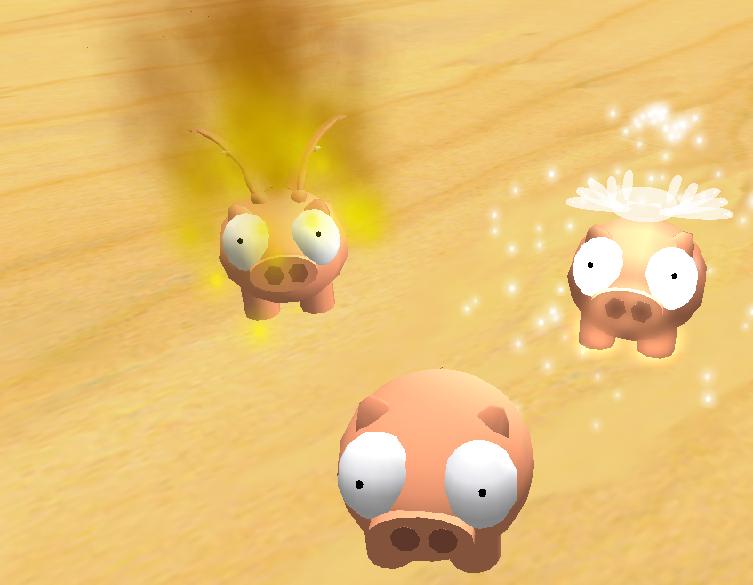 Using Second Life as a teaching platform has various motivational advantages, although it can also be a giant pain in the posterior.  Various students have commented on features of the environment that they like. One advantage is that they can see results of their programming visually and instantly: “It was a lot different than what I thought it was going to be and I had a lot of fun with it. Lindenscript took me a while to learn properly but I think I'm getting a hang of it now. Unlike [Java programming], it was exciting to see more visual results of my labor.“ or “I'm quite enjoying this type of programming due to the results that we can actually see which is a lot more rewarding than a lot of programming that I have done in the past.” Another favourite feature is seeing what the other students in the class have been building and using this as a source of ideas and help:  "It's great to see so many people’s pets looking better and better every week, a lot of people are pretty skilled at prim manipulation! I'll have to ask them for a lesson sometime.” One student summed up my own view of the Second Life quite neatly: “On the whole though I enjoyed the module.  Although I was sceptical at the beginning about  Second Life (and still view the platform as a little bit pointless in the grand scheme of things) I have come to appreciate that it makes for a really good teaching tool.”

I wanted to share a particular example of a student project which illustrates the “stretchiness” of Second Life. It can stretch to challenge even the brightest students if you give them enough leeway in their assignments. Of course, the bright students also need to be motivated and imaginative enough to think of ambitious ideas. A good case study is Michael Shannon’s glow flies. Michael decided early on in semester that he was interested in AI swarms and data visualisation and so he decided to make the virtual pet for his assignment a swarm of Second Life glow flies which represent something from the real world.  And he managed this, on a first year module by himself, in about twelve weeks during which time he had to teach himself how to work with swarm algorithms, the twitter API, and Second Life integration with a database using PhP.

This is a summary from Michael’s learning log for those who are curious to know how he did it:

“The various elements of the project are laid out below

This is now stable and continuously running, meaning that there is swarm of animated multi-coloured fireflies in Second Life that is visually representing the mood of Edinburgh at any given time, as per Twitter.”

I believe it is part of our role as educators to help the brightest students challenge themselves to the full extent of their abilities. Second Life is not the only platform which enables this, but it is certainly a good choice for imaginative open ended projects. And let’s face it, aren’t those ones much more fun to mark?