What Turing and Church Left Out

Concurrent message passing was crucially omitted from the lambda calculus [Church 1932], Turing Machines (TM) [Turing 1936], Simula-67 [Dahl and Nygaard 1967], and Logic Programs [Hewitt 1969], thereby crippling them as a foundation for the Internet of Things (IoT). Actors [Hewitt, et. al 1973] remedied the omission to provide for scalable computation. An Actor message passing machine can be millions of times faster than any corresponding pure Logic Program or parallel nondeterministic lambda expression. Since the time of this early work, message passing has grown to be one of the most important paradigms in computing [Hewitt and Woods 2018; Hoare 2016; Milner 1993]. 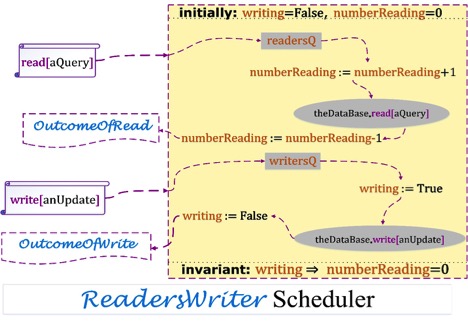 Many different policies could be implemented in the above scheduler including the following:

Computation that cannot be done by lambda Calculus, TM, or pure Logic Programs

Actor message passing machines can perform computations that a no lambda expression, nondeterministic Turing Machine, Simula-67 program, or pure Logic Program can implement. Below is an example of a very simple computation that cannot be performed by a nondeterministic TM:

There is an always-halting Actor message passing machine that can compute an integer of unbounded size. This is accomplished using variables count initially 0 and continue initially True. The computation is begun by concurrently sending over the Internet two messages to the Actor machine: a stop request that will return an integer n formalized as Output[n] and a go message that will return Void.

The Actor machine operates as follows: 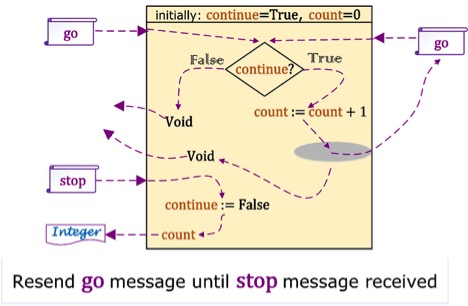 Theorem. There is no lambda expression, nondeterministic Turing Machine, Simula-67 program, or pure Logic Program that implements the above computation.

"Now the set of initial segments of execution sequences of a given nondeterministic program P, starting from a given state, will form a tree. The branching points will correspond to the choice points in the program. Since there are always only finitely many alternatives at each choice point, the branching factor of the tree is always finite. That is, the tree is finitary. Now König's lemma says that if every branch of a finitary tree is finite, then so is the tree itself. In the present case this means that if every execution sequence of P terminates, then there are only finitely many execution sequences. So if an output set of P is infinite, it must contain a nonterminating computation."

Theorem. It is well known that there is no 1st order theory for the above Actor machine.

Message passing has fundamentally transformed the foundations and practice of computation since the initial conceptions of Turing and Church. Although 1st order sentences can be useful (e.g. in SAT solvers), message passing illustrates why 1st order logic cannot be the foundation for theories in Computer Science.

Alan Turing. On Computable Numbers, with an Application to the Entscheidungsproblem Proceedings of the London Mathematical Society. November 1936.