A Simple View of the Budget Process

How does NSF get its money? First, remember that NSF is part of the Executive Branch*, which means everyone who works at NSF works for the President. Second, you need to understand the budget process. It is complex, but here is a two-step protocol that is an abstraction of the actual process: 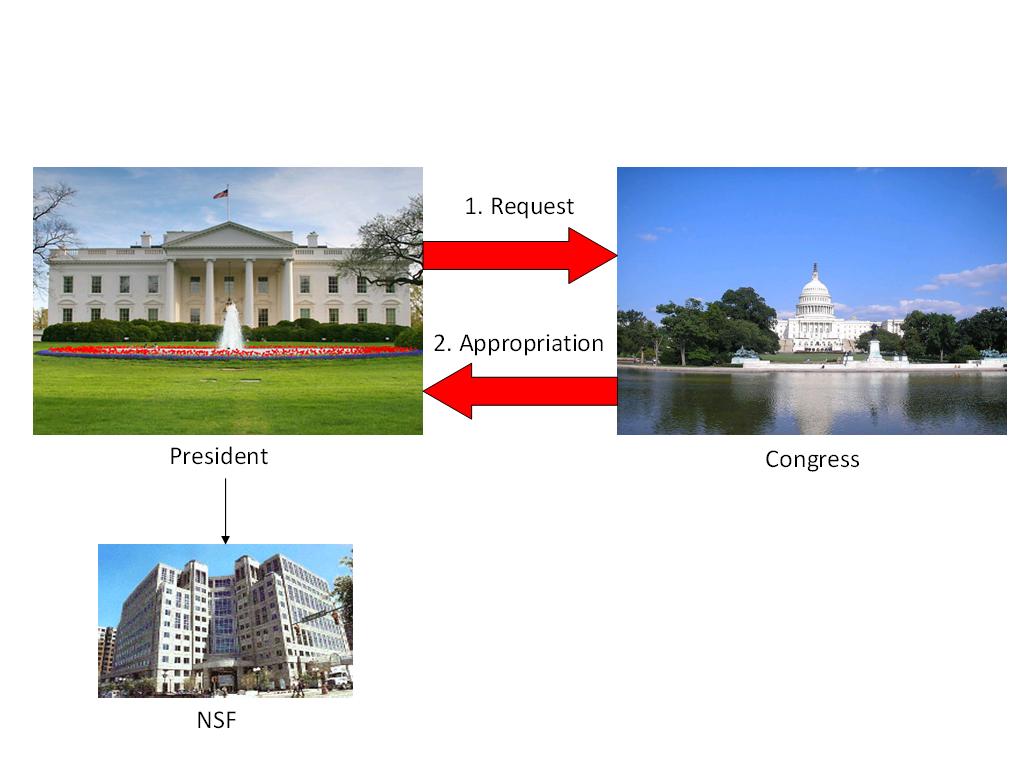 There are two parties, each at opposite ends of Pennsylvania Avenue, the President and Congress. In Step 1 of the protocol, the President submits his Budget “Request” to Congress. After much debate, in Step 2 Congress passes an “Appropriation” bill that determines how much, in the end, NSF gets. Whatever is written in that bill is what we (and other federal agencies) get. The two numbers (Request and Appropriation) need not be the same. One can be greater than the other in either direction.

What about the timing of these events? The fiscal year in the federal government starts on the first of October; thus, FY10 starts October 1, 2009. The President is required by law to present his  Request to Congress on or before the first Monday of February in each calendar year, for the next fiscal year. At that point, Congress takes over. If all goes well, then by October 1, NSF would get its Appropriation and we can make awards based on the new fiscal year’s number.  Read on if you want to learn about some complications.

One wrinkle to this process, which has been relevant this fiscal year at NSF, is what is called a “Continuing Resolution.” If Congress has not signed into law a formal appropriations bill by the start of the new fiscal year, then a “Continuing Resolution” provides funding for federal programs at or less than current levels. NSF is currently under a CR. What that means is that regardless of what the President’s Request for FY09 was (which happened to be $639M for CISE), since we are under a CR in FY09, we are allowed to spend only at the FY08 level ($535M). What that means is that starting October 1, 2008, we had a lot less money to give PIs than we had hoped for.

* Since NSF is part of the Executive Branch, we at NSF cannot directly speak to Congress. However, should a congressperson or staffer wish to speak to us, we are more than happy to oblige.

The Internet Eats Up Less Energy Than You Might Think

When Hackers Were Heroes