CHI 2015, the conference on Human Factors in Computing Systems, was hosted by ACM SIGCHI April 18-23 in Seoul, Korea. This marked the first CHI in Asia, and appropriately, the theme of this year’s conference was "Crossings."

CHI brings together academic researchers, practitioners, and industry employees who are interested in creating better ways for the human and computer to interact with each other. Whether it’s by focusing on people and user experience, creating new user interfaces and input mechanisms, developing systems that combine different modalities, or improving current devices, researchers at CHI help improve the human-computer dialogue.

A total of 2,902 researchers, practitioners, students, and vendors attended the conference, with over 850 attendees coming from Korea. The conference was held at COEX Mall in the Gangnam neighborhood. For all of the major keynote speakers as well as several popular panels, simultaneous translation was available in Korean, Chinese, and Japanese.

"Jinwoo [Kim] and I were really ecstatic about the turnout for the conference. We weren’t sure how many people in Asia would come but with 40% of attendees being from Asia, the CHI community can be sure that Asia will be a welcoming host for the future!" said Bo Begole, general co-chair of CHI 2015. "It was also personally gratifying to see my friends and colleagues discover Seoul and the tremendous accomplishments of HCI throughout Asia."

This year’s opening plenary speaker was Lou Yongqi, Dean of the College of Design and Innovation at Tongji University in Shanghai, discussing HCI, Design and Sustainability.  Yongqi described the narrative between four types of systems in our world: nature, human, artificial systems, and cyber, and the interactions between these different systems. In addition, Lou made us think about sustainability and how to create systems that would help the environment and world for generations to come. 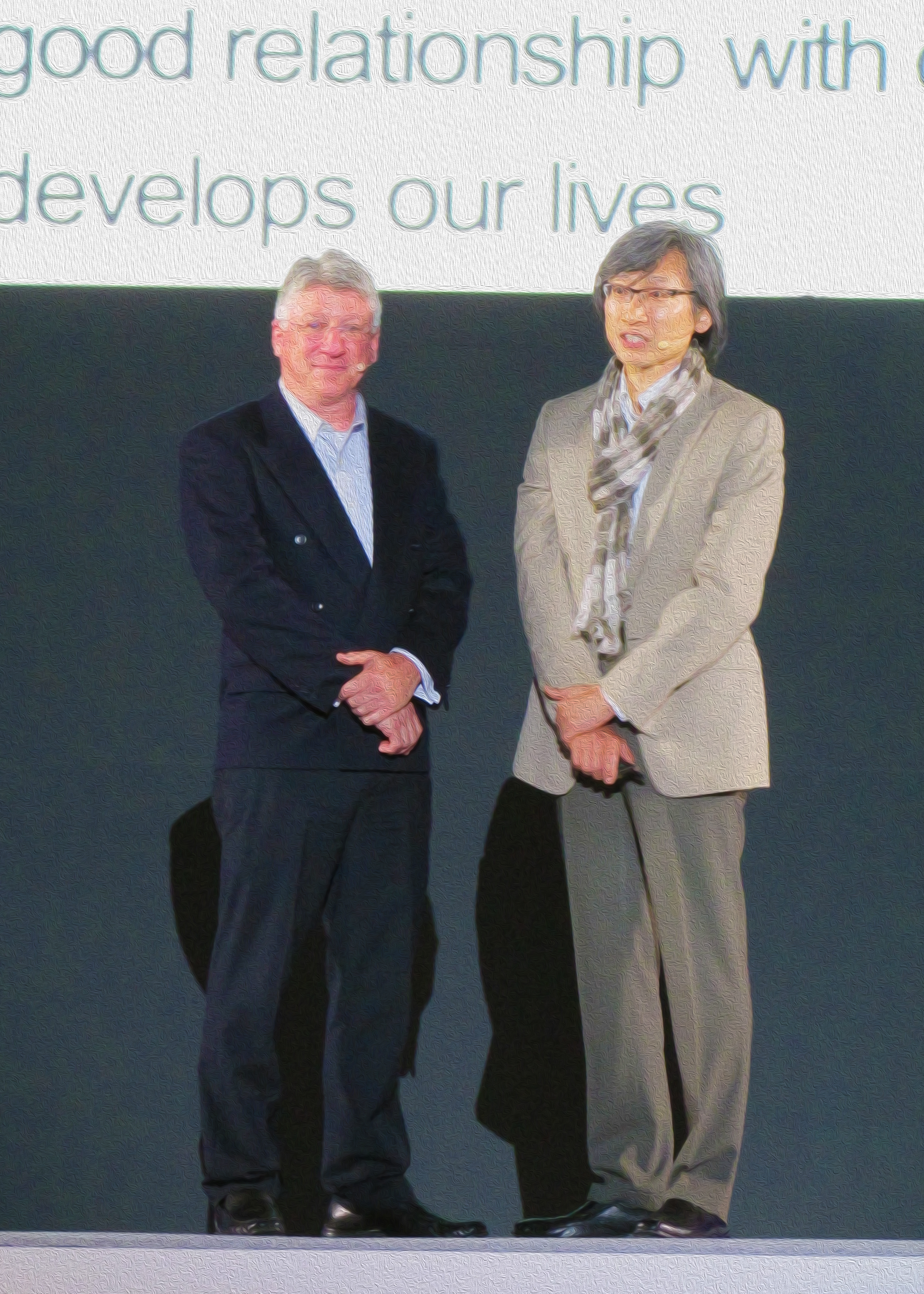 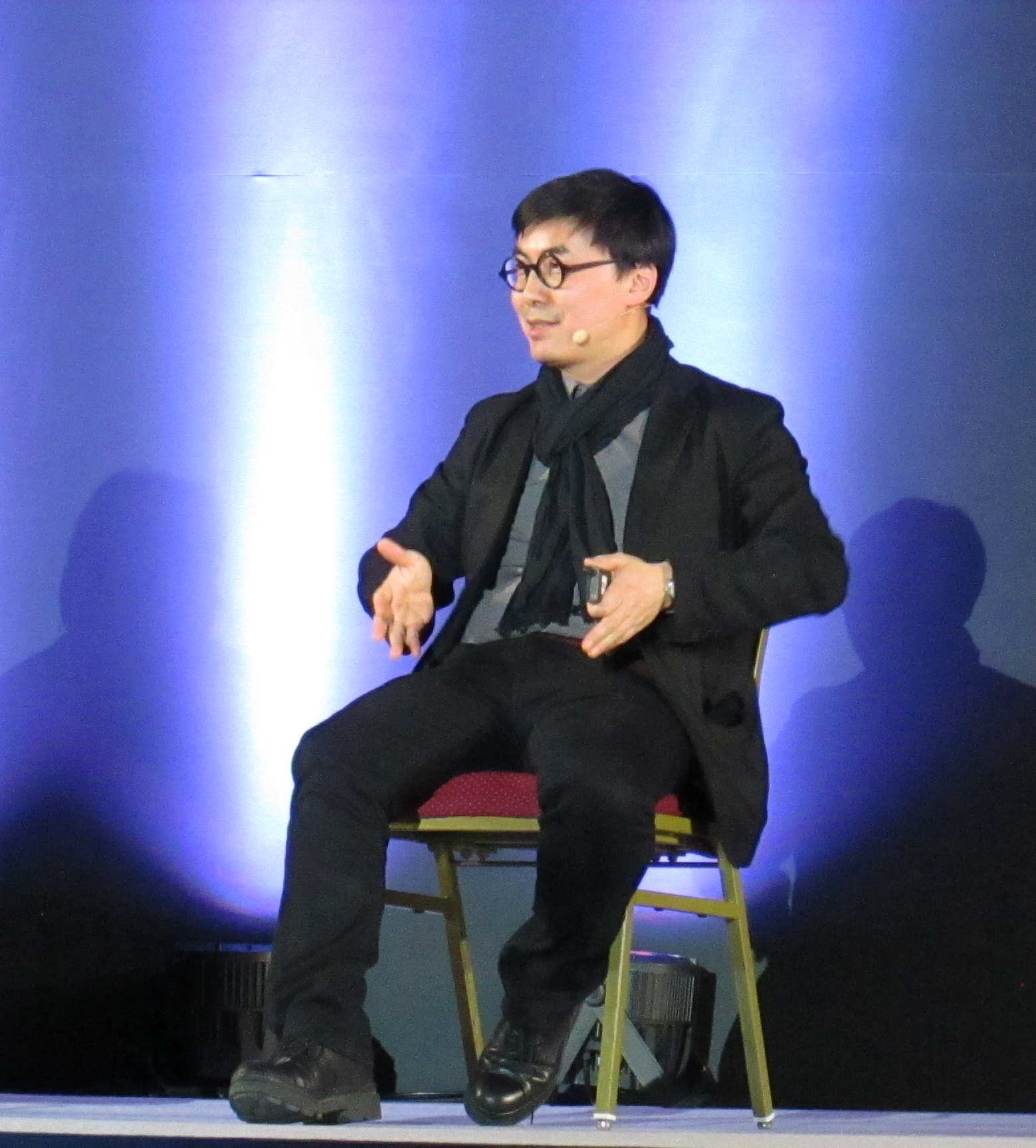 With 15 simultaneous tracks, it was impossible to attend a majority of the talks at the conference, but one of the major themes throughout CHI 2015 was Internet of Things (IoT), and how interconnected devices can work together to enable users. Donghoon Chang, Head of Design Strategy Team and UX (user experience) Center for Samsung gave the Tuesday morning keynote and discussed UX Design in the IoT Era and how the future doesn’t entail users staring at tiny devices, but rather devices that react and adapt to the environment autonomously. In addition, there were various talks about different ways to incorporate multiple devices. Fadel Adib et al. presented a paper on a non-intrusive way for a home to monitor users’ breathing and heart rate without body contact, and Jens Gruber et al. discussed and demonstrated MultiFi, a tracking system that can combine the displays from multiple devices seamlessly on and off the body (see video above).

The conference felt even more international than ever, starting with the multi-language welcome message in the conference program, the translation services, four Asian CHI symposia on the weekend, the Korean dance performance at the opening reception and the "Local Heroes" posters highlighting researchers based in Asia. CHI 2015 really demonstrated a commitment to folding in HCI from across the globe. 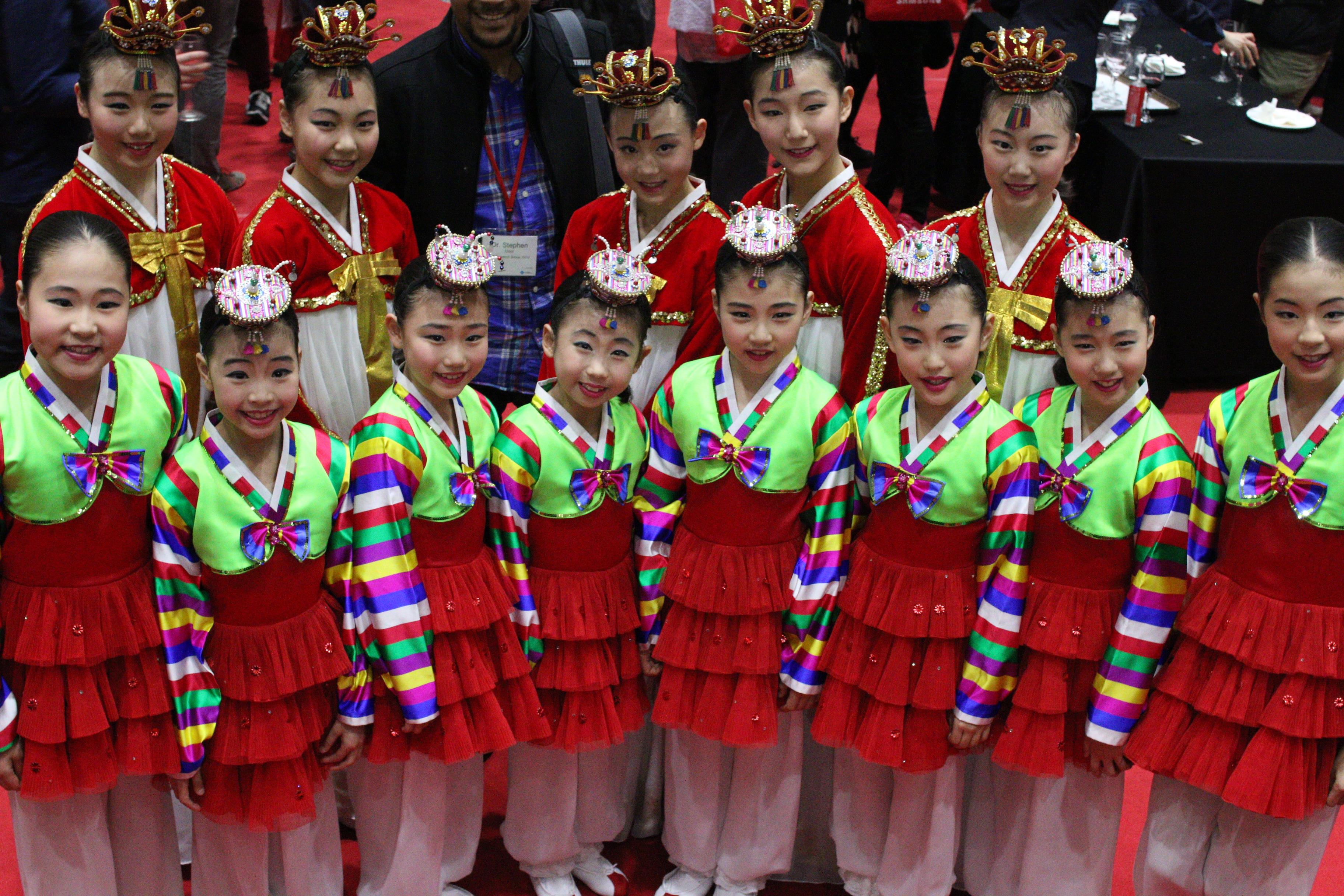 (The Little Angels performed at the CHI opening reception)

One of my favorite parts of CHI is Interactivity, hands-on exhibits each day where attendees can interact or watch systems in action. These exhibits bring the conference to life, allowing attendees to try new technologies and experience systems in new ways! While all of the exhibits were fantastic, a few that caught my eye were Multi-Player Gaming on Spherical Displays, where people could join a game by touching a large sphere with a game projected onto it, EdiPulse: Turning Physical Activity Into Chocolates, where they 3D-printed chocolate as a user’s heart rate increased, and Level-Ups: Motorized Stilts that Simulate Stair Steps in Virtual Reality, where a researcher took steps and the stilt size changed according to the height of the virtual environment terrain.

CHI is an extremely selective conference, accepting less than 20% of all submissions, and the talks all week reflected this high quality. One fun feature of the conference, introduced last year, was the ability for attendees to vote on the best talk given at the conference. Attendees were given voter IDs and could vote for the most unique and captivating talks at the conference. All three winners had a strong biology and body component, indicating the field’s interest for devices that interact with the body. First place went to Lining Yao et al. from MIT & MIT Media Lab for their talk "bioLogic: Natto Cells as Nanoactuators for Shape Changing Interfaces;" second place was awarded to Leyla Norooz et al. from the University of Maryland for "BodyVis: Body Learning Through Wearable Sensing and Visualization," and third place went to Pedro Lopes et al. from the Hasso Plattner Institute for "Proprioceptive Interaction."

On a personal level, I was lucky and grateful to be one of the 167 Student Volunteers (SVs) chosen out of over 900 applicants. The SVs, denoted by their awesome green t-shirts, ensure that the conference runs smoothly by directing people to talks, running tasks for conference staff, monitoring sessions, and generally helping out with a smile. However, we get a peek at the behind-the-scenes of CHI, and got to interact with some of the leaders in the field. CHI "Rockstars" came out to eat lunch and chat with us, and it was also a great way to meet other students! 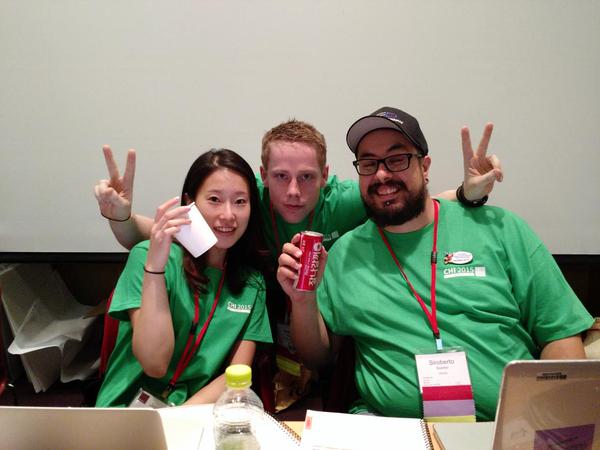 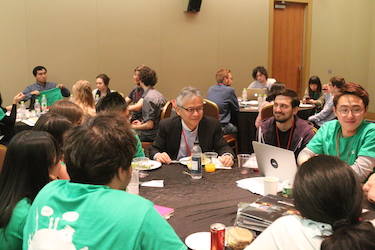 However, an air of anticipation hung in the air all week, as everyone waited for CHI’s closing keynote speaker. I’ve never seen such a line to get into the auditorium! It’s not every conference that features the world-renowned singer PSY as a speaker! PSY chronicled his rise to success, how technology and media helped him rise to fame, and how he had to work hard to look like he wasn’t working hard. Of particular importance, PSY told the audience that distributing his song under a Creative Commons license and stopping his record label from removing parodies helped his rise to stardom, and that his biggest regret is being known for a horsey dance. 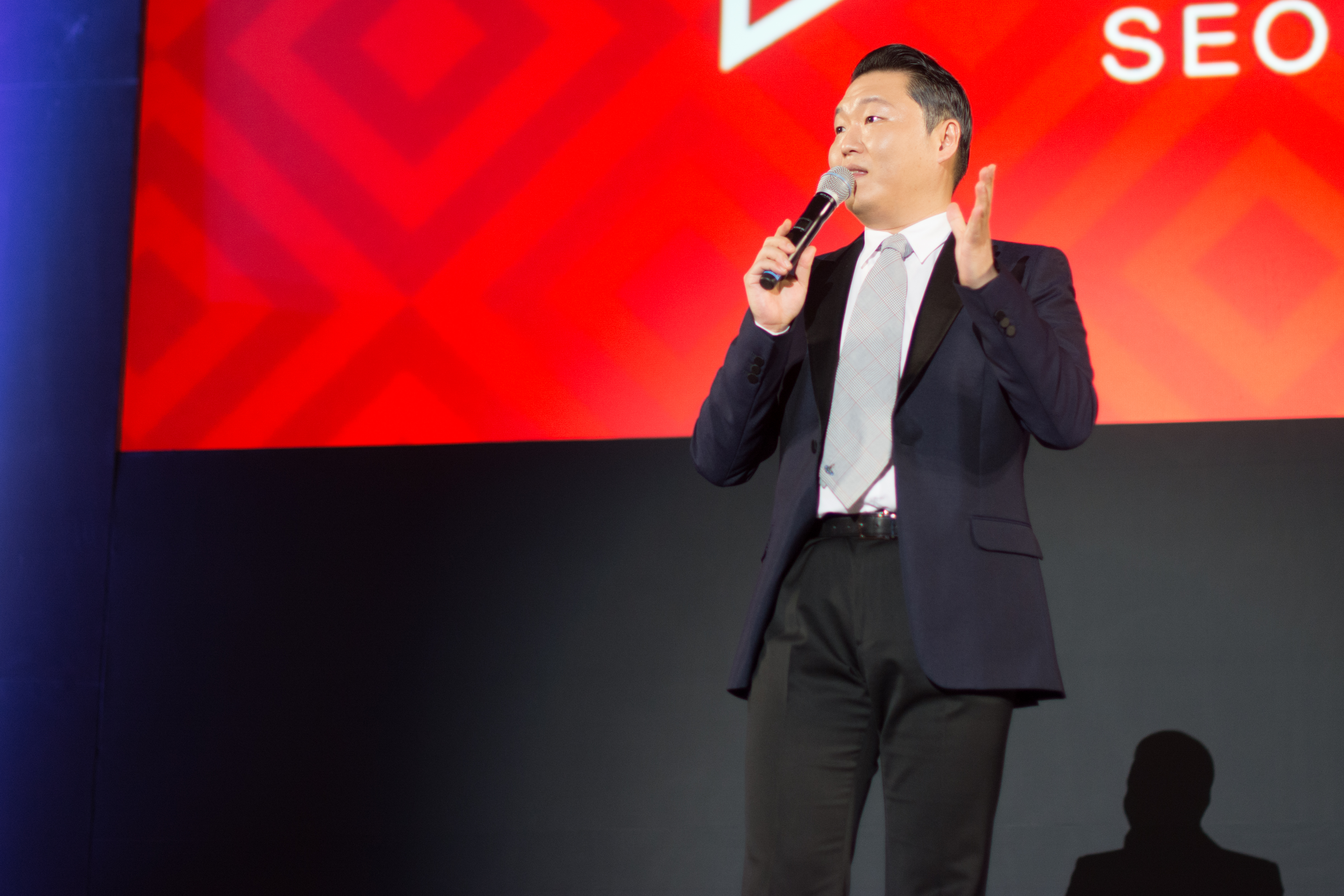 The conference ended on a high note, as next year’s chairs, Jofish Kaye and Allison Druin, gave out multicolor styrofoam glowsticks. They tracked in real time the colors of the glowsticks as people changed the color indicated their affiliations (academia or industry), their favorite CHI twitter accounts (@_CHINOSAUR vs. @SottedReviewer vs. @clifflampe), and even spelled out CHI! 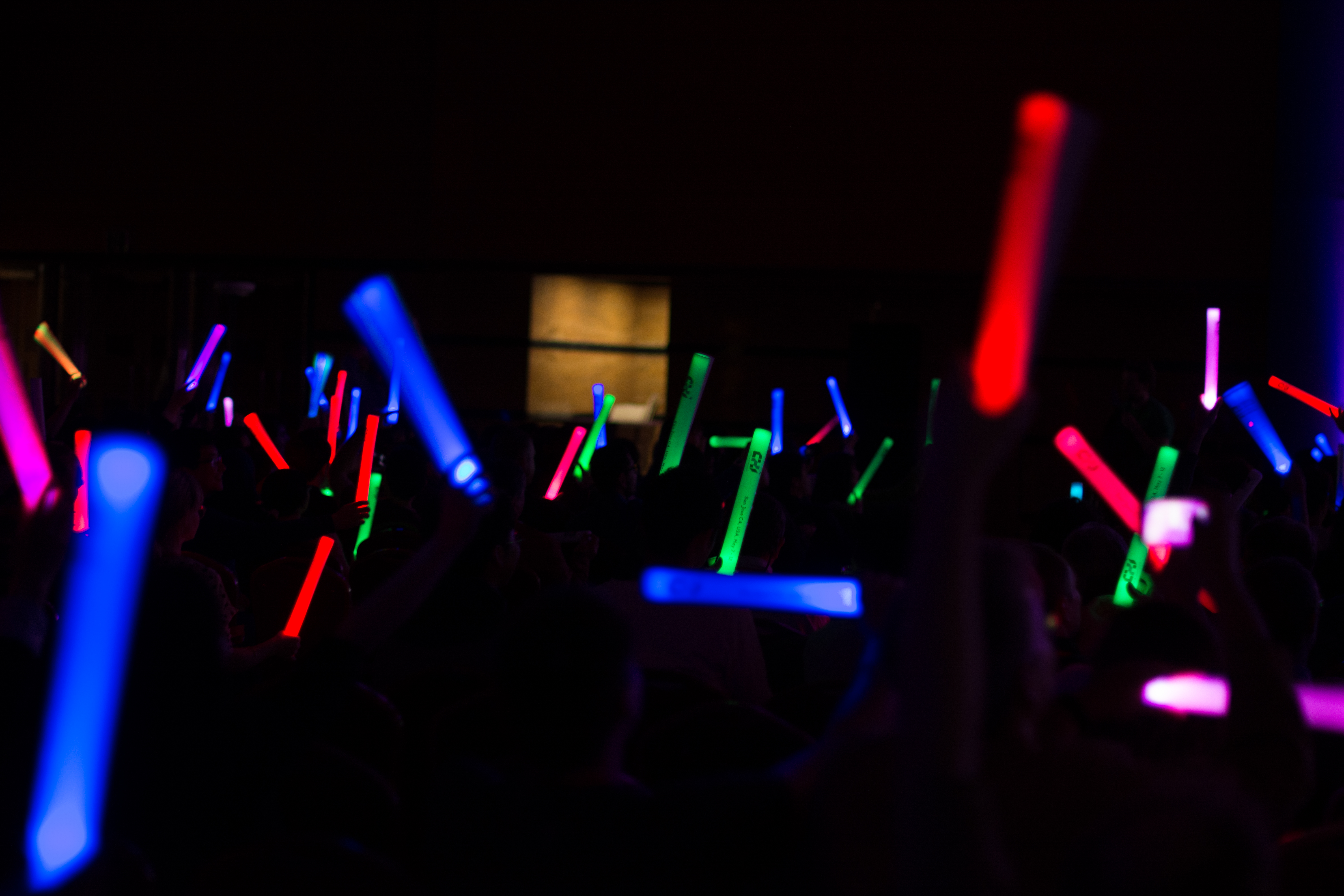 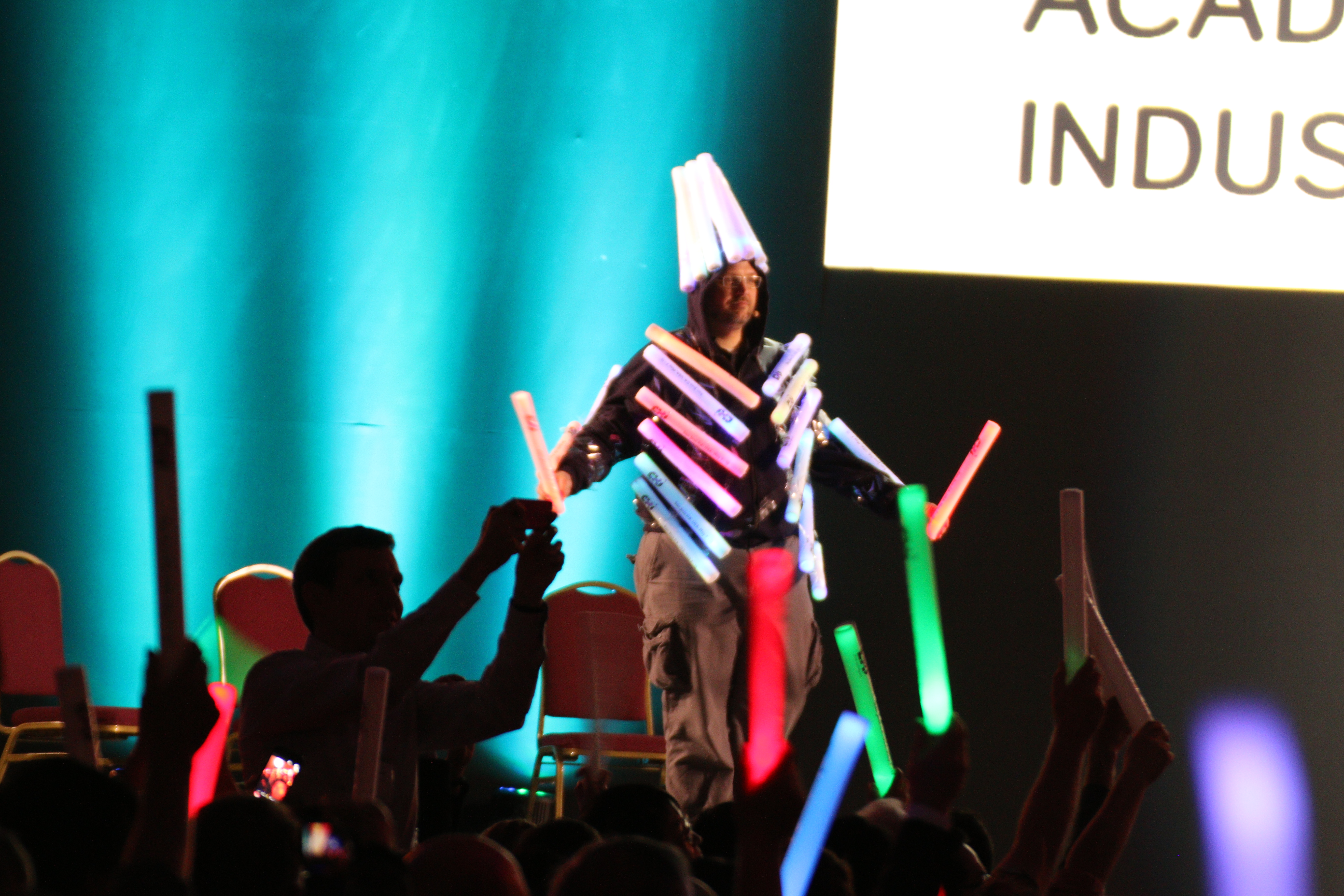