In her new book, InGenius: a Crash Course on Creativity, Tina Seelig, executive director of Stanford University’s Technology Ventures Program, describes two young entrepreneurs with an idea: an iPhone app for sharing your location with your friends. The product wasn’t as successful as they’d hoped, so they kept adding features to see if they would increase the popularity of the app. One new feature enabled people to use their cell phones to shoot photos and quickly edit and post them. That feature was “a huge hit,” writes Seelig, and the pilot saw membership rise to one million users in two months. A year later, there were 12 million users. The entrepreneurs are Kevin Systrom and Mike Krieger, who last week sold their company, Instagram Inc., to Facebook for $1 billion.

For Seelig, this tale illustrates not how to get rich quick, but three factors––attitude, knowledge, and imagination––that can spark creativity. For example, the attitude that unexpected outcomes are not failures, but rather data to learn from, is crucial to creativity and innovation, according to Seelig, who is a neuroscientist and earned her PhD at Stanford University School of Medicine.

“There’s a huge problem with the word failure,” she says. “As a scientist, when I do an experiment that doesn't work as I expected, what do I call it? Data. It’s not a failure. In fact, some of the most interesting scientific research comes from experiments that have unexpected results. The key is to look at the things that don’t come out as expected as data that provides interesting clues to what is really happening. If you are afraid of failure, you won’t try anything new.”

Systrom and Krieger’s success “would never have occurred had they not been willing to experiment and to learn form all the surprising results along the way,” she writes in Chapter 9, Move Fast––Break Things. “…[They] viewed each early trial as fertilizer for the next experiment.” (Systrom and Kreiger discuss Instragram during a talk at Stanford.)

In her Stanford University course on creativity and innovation, Seelig requires students to write failure resumes so that they remold their attitudes and realize that failure is a natural part of the learning process. That is “the spark that jump-starts your creativity,” she writes. It is one of the six factors in her Escher-like model of an Innovation Engine that can unleash creativity. 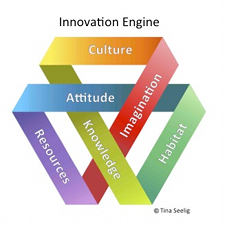 Knowledge, which provides the fuel for imagination, was also critical to the Instagram team. “They are engineers and could not have created their product without knowing how to build it,” says Seelig. “Scaling Instagram was a complicated technical problem. When they hit challenging problems, they had to continue to build their knowledge to provide them with the tools to address the challenges. To be creative you must have a depth of knowledge as a starting point. It doesn’t have to be a direct match with the problems you are trying to solve. In fact, some of the most interesting innovations come from those outside of a particular domain.”

In Seelig’s Innovation Engine model, attitude, knowledge, and imagination overlap and are internal because they reside in the mind, whereas culture, habitat, and resources are of the outside world. Culture, habitat, and resources influence the process by which imagination catalyzes the transformation of knowledge into ideas. Thus the individual and the environment are interdependent in interesting and non-obvious ways and essential for creative problem solving.

Knowledge is parallel to resources in the model, because the more you know, the more you can unlock resources, says Seelig. The type of resources in your environment also determines what you know. Someone in Silicon Valley is likely to know about venture capital, and the more he or she knows about venture capital, the more likely he or she is to get funding. “It’s really important to look at the interrelationship of all these pieces and not look at them in isolation,” Seelig advises.

One creativity technique Seelig advocates is working with forced constraints, which she says lead to better products. By spending the least amount of time on a product before releasing it, for example, developers can get faster customer feedback. Asked whether in the software arena that can result in buggy code and trading off lower standards for super-fast innovation, Seelig suggested instead considering hypothetical constraints--how might you accomplish something with fewer resources?

“If you have a zillion dollars, then you probably will spend that,” she says, “but if you have less, you may come up with an interesting, more efficient solution.”

Amazon uses this technique, she says, identifying constraints and considering what would happen if they tightened or loosened them. Similarly, although Twitter’s 140-character constraint seemed terribly limiting initially, people have found remarkable, innovative ways to use it. One of Seelig’s favorites: micro recipes tweeted by @cookbook’s Maureen Evans.

Seelig believes creativity can be taught, that we are all naturally creative, and that we just have to unlock our Innovation Engines. We are inherently creative in communicating and responding to the world around us, she says. “Interacting with the world requires creative problem solving every day. Every sentence we utter is unique. We don’t just have robotic answers,” she says, “Our brains are creativity machines.” The problem is that our environment and culture have squashed that and our education system is to blame, Seelig says, because it assigns problems with one right answer, and favors multiple-choice tests. “Yet we are frustrated that people are less creative,” she says. Putting pressure on students to memorize facts instead of learning to solve problems is stultifying, she says. While we need to teach information, there are myriad ways to do so, she says, for example, exams could ask students to design an experiment.

In college, Seelig took a test that required her to design a process for creating a genetic clone. “I walked out of the exam feeling empowered because I was able to solve a problem that I hadn’t seen before.” She recommends giving exams that make students use material in interesting and unexpected ways. Furthermore, Seelig says, she is “terribly saddened” that her graduate students have never been taught techniques to jump-start creativity. “They should be exposed to this in elementary school, high school and college,” she says.
Despite such hurdles, we all “have the power to overcome challenges and generate opportunities of all dimensions,” Seelig concludes at the end of InGenius. But the Innovation Engine has an ignition key and it’s not easy to turn. “It’s hard to get beyond obvious answers,” Seelig says, “It takes work and commitment to get beyond the first, second, and third waves of ideas to get to the ones that are really interesting.”

Karen A. Frenkel is a freelance writer and editor in New York specializing in science and technology.

The Worldwide Web As We Know It May Be Ending