Tech and politics don't mix. That has been the story Silicon Valley leaders have broadcast to the world since the region first sprang into the forefront of public consciousness as the land of silicon chips, personal computers, and video games. It is an attitude in keeping with the celebration of rugged individualism and disdain for centralized political power that has been part of American political culture since the nation's founding, ideas that gained additional allure amid the stagflating malaise of the post-Vietnam, post-Watergate 1970s. In the Reagan Revolution year of 1980, the sole election-year commentary in the microelectronics-industry newsletter InfoWorld was a cartoon tucked into a bottom corner of the editorial page. "I was going to keep track of all the candidates' significant statements," one man sighed to another as they stood in front of a computer terminal, "but there's no way to process an empty disk."

Four years later, Steve Jobs declared, without embarrassment, that he had never voted in his life. 1990s-era moguls including Bill Gates and Jeff Bezos ducked questions about their voting preferences for years. In the early 2000s the loudest and most unapologetically political voices coming out of Silicon Valley were libertarians such as PayPal cofounder and Facebook board member Peter Thiel. Politicians of both parties long courted Silicon Valley's affections, but for many in tech, politics was something to be publicly ignored, if not actively disdained. 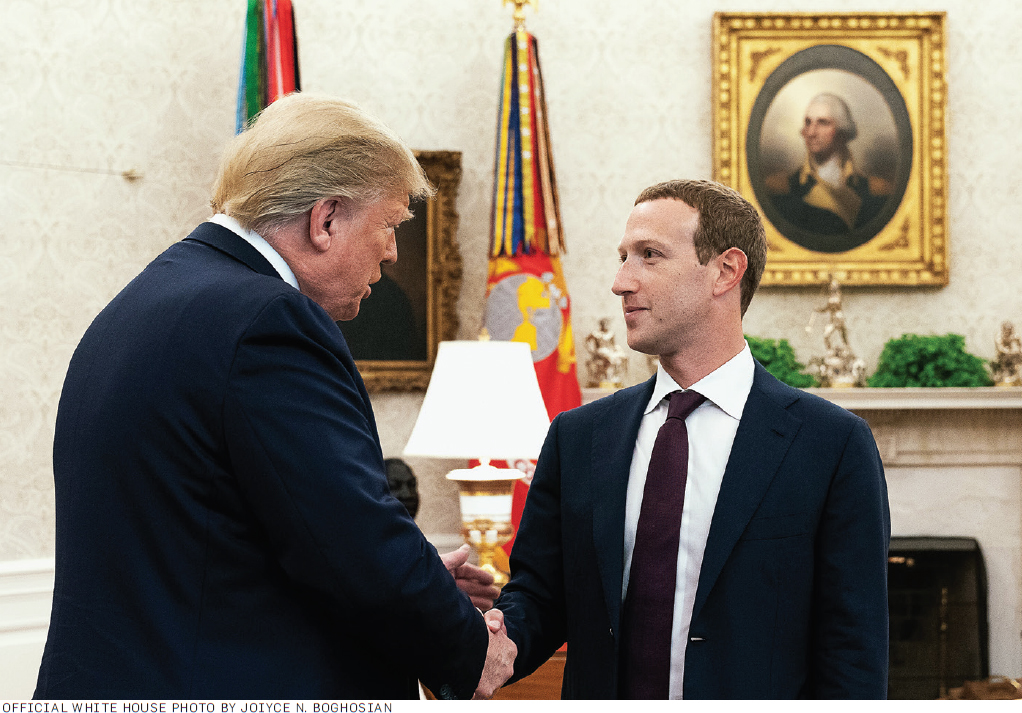 Six years ago, as I embarked on the research process for my recently published history of Silicon Valley, The Code, I told a longtime tech-industry veteran that part of my goal was to show how tightly the industry's rise and evolution intersected with modern American political history. "Can I tell you something?" my interviewee interjected, not unkindly. "If you write about tech and politics, that book is going to end up on the remainder table. Because there's no story there."

My proposition is not such a tough sell in the America of 2020. Before the COVID-19 pandemic ground normal life to a halt, tech CEOs ricocheted between White House photo-ops and scorching presidential tweets. Many in the tech rank-and-file donated to progressive Democrats like Bernie Sanders and Elizabeth Warren while members of tech's C-suites threw high-dollar fundraisers for Democratic centrists and the Republican incumbent alike. The size and scale of tech's biggest platforms and products triggered sharp public criticism and fresh lawmaker scrutiny. Tech regulation was the rare issue on which the two parties seemed to agree.

This is not as much of a turnabout as it seems. Silicon Valley's mythology of independence to the contrary, politics and government are absolutely central to its story. This was the case in other industrialized nations as well, but only in the U.S. have tech entrepreneurs and many of their allies embraced such a thoroughly market-driven understanding of their accomplishments. American technologists' collective amnesia has served a political purpose of its own, instilling a sense of entrepreneurial agency amid intensive government mobilization and market intervention, and also building a political case for, among other things, self-regulation of online platforms. To understand how and why to grapple with today's tech policy landscape, we must reckon with this history and the institutional reality that the U.S. government built the tech industry, but it did so in a way that helped the industry's leaders believe they did so all on their own.

One point of connection comes with an institutional symbiosis familiar to any technologist who has worked in an NSF-funded laboratory or entered a DARPA robotics competition: the academic-military-industrial complex established in the early Cold War. As historians of science remind us, this purportedly apolitical Big Science was in fact deeply political. Competing with the Soviets provided the rationale for unprecedented public investment in everything from university science and engineering programs to the rockets of the Apollo program.

Yet as significant as the money itself was the way in which it flowed: indirectly, via grants and contracts to private defense contractors, to research universities, to industrial research labs. This obscured the extent to which government spending was undergirding the enterprise, yet another example of the indirect and privatized process of state-building that has been a hallmark of American federalism since the 19th century. In the early Cold War period, this structure spurred innovation and market competition in advanced electronics industries at a time when commercial demand was nearly nonexistent, creating a foundation for later growth of consumer and business markets.

Take for example the case of the silicon semiconductor industry that gave the Valley its name. Fairchild Semiconductor, the pioneering startup whose many spinoffs include Intel and the legendary venture capital firm Kleiner Perkins, had the lucky break of incorporating in September 1957, only a few weeks before the Soviets launched Sputnik into orbit and sent the American space program into overdrive.

Silicon Valley's mythology of independence to the contrary, politics and government are absolutely central to its story.

Sending satellites into orbit, or astronauts to the Moon, required light, powerful electronics like the semi-conductors and integrated circuits developed by Fairchild. The technology was so new that only Fairchild and other specialist electronics firms like it could supply what the space program needed. The spike in demand coincided with budget-minded Defense Department reforms to the prime contracting system that dislodged larger and more well-established firms. The result was that in Fairchild's early years, this granddaddy of all Silicon Valley startups had more than 80% of its book of business come from government contracts. Large purchase orders from the Apollo program for integrated circuits drove down the price and allowed chipmakers like Fairchild to scale up production, enabling a commercial market to emerge by the end of the 1960s.

A similar combination of entrepreneurial energy and government subsidy and encouragement lies behind the origins and evolution of the Silicon Valley-based personal computer industry. Unlike the Cold Warriors who inhabited the early electronics industry, the personal-computer makers hailed largely from a Vietnam generation who wanted nothing to do with the military-industry complex and instead saw computers as tools of liberation from the establishment's rules and gatekeepers. Instead, they crafted an anti-politics that was in itself a political position of its own. Alternatively called "new communalism," "cyberlibertarianism," or "the Californian ideology," this techno-utopian variant of 1960s countercultural thought was both deeply cynical—governments and traditional authorities were not to be trusted—and earnestly techno-optimistic.a Place a computer on every desk, and connect their users in non-hierarchical networks of communication and creation, and you would fix what ails an ailing world.

But the proclamation and dissemination of this ideology obscured the fact that, particularly for those running high-tech enterprises, tight connections to traditional political institutions and political processes remained an essential part of doing business. Valley leaders were active and consistent lobbyists for help from Washington as the industry weathered the economic storms of the 1970s and launched a new set of consumer-facing companies in the 1980s. Unlike today's armies of hired tech lobbyists who line K Street and advocate on companies' behalf, early lobbying efforts involved the CEOs themselves, bringing a little California casual to Capitol Hill's marble hallways.

Semiconductor executives descended on Washington to plead for protection from the heavily subsidized Japanese competitors who were flooding, and dominating, the chip market. Venture capitalists and electronics executives successfully petitioned for reductions in the capital gains taxes that, in their telling, scared investors away from making "risk capital" bets on new tech companies.

Even the proud nonvoter Steve Jobs spent two weeks on the Hill in 1982 attempting to persuade lawmakers to pass a tax break that would encourage widespread use of computers in schools—an education market that, conveniently, Apple already dominated. The legislation failed in Washington, but then-Governor Jerry Brown of California swooped in to sign a similar state-level measure, thereby helping ensure an Apple would be the first computer for most of the schoolchildren in the nation's most populous state.

The well-trod path between Silicon Valley and Washington became even wider in the 1990s, as the commercialization of the Internet spurred a new set of technologists to collaborate with lawmakers in an effort to influence the rules and regulations that would guide the new platform. Silicon Valley dotcom companies and their allies then were the David to the Goliath of the telecom industry, and a main goal of their engagement in the legislative debates around telecommunication reform and Internet regulation was to ensure that online information flowed as freely as possible—without the Comcasts and AT&Ts of the world choking it off.

In a divided Washington, the information-should-be-free message was one with appeal to both the Democrats in the Clinton-Gore White House and the Republicans in the Gingrich-led Congress. The result was that the Internet industry was allowed to regulate itself—precipitating an explosion in online content, and enabling the rise of new platforms and products that now form the core of tech's most significant companies.

So when it comes to tech and politics, there is a story there—a history urgently relevant to the technology landscape of 2020. The long history of defense work, and of companies that were both federal contractors and merchant producers, helps make legible the remarkable role that tech giants now play in national security and defense contracting. The consistent lobbying for tax and regulatory relief belies the Silicon Valley mythos that its innovative story was something that happened on its own, without government help, and it extends the political history of tech beyond only the military-industrial complex. The regulatory environment that governs the Internet today was the right response to the Silicon Valley of the early dot-com era, but it now is as outdated as pop-up ads and Windows 95.

Linking the two histories together, and appreciating their relevance, is essential grounding for where tech, and we who make and use it, might go next.

We Are Not Users: Gaining Control Over New Technologies

AI Education for Teens: Lifting the Hood on Data and Machine Learning