Conferences in an Era of Expensive Carbon

A broad scientific consensus warns that human emissions of greenhouse gases are warming the earth. This is a present-day emergency: the UN's Intergovernmental Panel on Climate Change (IPCC) says a 40% decrease in emissions is needed by 2030 to avoid irreversible damage.10 Reductions on this scale require urgent and sustained commitment at all levels of society—not only national, state, and city governments, but also universities, companies, and scientific societies.

Indeed, scientific societies have an especially important role to play, since, for many members, travel to conferences represents a substantial or even dominant part of their individual contribution to climate change. A single round-trip flight from Philadelphia, PA to Paris, France typically emits the equivalent of approximately 1.8 tons of carbon dioxide (CO2e, or informally "carbon") per passenger.14 This is a significant fraction of the total yearly emissions for an average resident of the U.S. (16.5 tons) or Europe (7 tons).5 Moreover, these emissions have no near-term technological fix, as jet fuel is difficult to replace with renewable energy sources.15

How should ACM respond to these facts?a

In 2016, ACM's Special Interest Group on Programming Languages (SIGPLAN) convened an ad hoc Climate Committee to consider this question.2 After investigating many options,7 we are putting forward two concrete proposals. First, all ACM conferences should publicly account for the CO2e emitted as a result of putting them on—in particular, from travel to the conference. Second, ACM should put a price on carbon in conference budgets, creating a steady pressure on organizers to reduce their footprints.

Our first proposal is modest: Every ACM-sponsored conference should publicly report its carbon footprint. These reports should be collected in a central place, in a uniform format. Most conferences' footprints will be dominated by participants' air travel, but the data gathered should go beyond this to include ground transportation, travel to in-person program committee meetings, and estimated emissions from hotels and food.

ACM should develop tools to gather and publicize this data. For example, SIGPLAN recently built an air-travel-focused carbon calculator for conferences.13 Users can upload conference registration data, and the calculator will estimate the CO2e cost of air travel.

There is some reputational risk to ACM in taking the step of publicizing its carbon footprint: the numbers are likely to be high, and they may be used to criticize both ACM and the broader academic community. But making this information available is a crucial first step: we cannot manage what we have not measured.

Easy trimming. One effect of public accounting will be to nudge conference organizers and attendees to change their behavior. By analogy, chain restaurants in the U.S. are now required by law to post calorie counts of food items on menu boards; studies show that enlightened customers order, on average, up to 50 fewer calories a day.6

Similarly, SIGPLAN has been considering how to reduce emissions, informed by an accounting of its own carbon footprint. This discussion has led the organizers of two flagship conferences (POPL and ICFP) to switch from in-person to online program committee meetings, joining a trend among other SIGs, and has prompted several conferences to increase investments in livestreaming and video recording to support remote participation.

Difficult choices. However, while public accounting of emissions will encourage easy reductions, it is not likely, by itself, to induce major shifts in behavior. Science is a fundamentally social process, and the conference system accelerates scientific research through high-bandwidth interaction, direct dissemination of results, network building, and serendipitous cross-fertilization. Organizers and attendees will naturally be reluctant to consider changes that might threaten these benefits.

To illustrate the challenges, consider the problem of choosing a conference location that minimizes emissions from participants' travel. Using recent registration data from four SIGPLAN conferences, the accompanying figure shows two ways of looking at the relation between locations and emissions. The top diagram shows an estimated per-participant CO2e footprint for each instance of each conference over the past 10 years (excluding a few for which we had difficulty getting data), with larger dots representing higher emissions. Eyeballing this diagram, it might seem that carbon-conscious organizers should hold all of these conferences in either the north-east U.S. or western Europe every year. But the bottom visualization tells a different story. The horizontal colored bar at the bottom represents the continent on which each conference was held, and each vertical bar gives a breakdown of the participants in that conference, colored according to the continent of their work address. A glance at the colors makes clear that—though a minority come from far away—the majority of participants in each conference are local to the region where the conference is being held. This suggests that always locating conferences in the same one or two places would significantly impact the diversity of the research community by discouraging participation from other parts of the world. Indeed, one might conclude that, from the point of view of strengthening the research community, conferences should move around as much as possible! These disparate perspectives suggest that significantly reducing conference emissions may require genuinely painful compromises. The impulse to ignore the issue is entirely understandable. 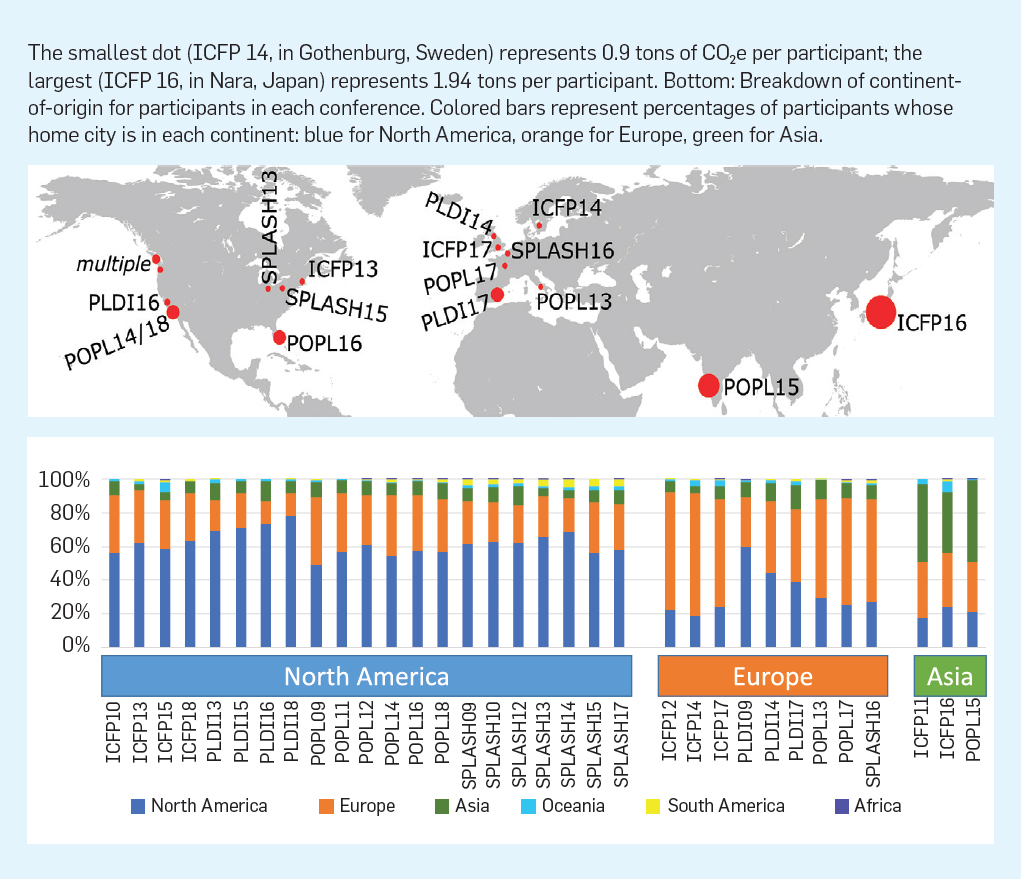 However, the present trajectory of world emissions is unsustainable: difficult choices will have to be made, and soon, if ACM is to play its part by reducing its own emissions. How do we motivate organizers to face these choices?

Put a Price on Carbon

This dilemma is a microcosm of one faced by all of society. To address it, many policy experts advocate using some form of carbon pricing to impose a concrete, immediate cost on emissions.8 Doing so makes manifest the hidden environmental cost of emissions, incentivizing CO2e-reducing changes without mandating exactly which ones, and thus allowing for creative and efficient responses. Continuing the junk-food analogy, some municipalities including Berkeley and Philadelphia have imposed a per-calorie tax on soft drinks; studies found that doing so significantly reduced consumption.11

Thus, our second proposal is that ACM should impose a surcharge on conferences based on their carbon footprint. The charge should start low and increase steadily and predictably, year on year. Conference organizers can then choose how best to balance their budgets—whether by decreasing per-participant emissions, decreasing (physical) participation, increasing registration fees, soliciting corporate sponsorship, or other means. In this process, a primary concern should be to find ways of reducing the financial burden of such a surcharge on those disproportionately affected by it—students without grant support, participants from developing areas, and so forth. Well-funded participants should subsidize the carbon surcharges of less-wealthy ones.

Ideally, at some point, governments will impose carbon pricing uniformly, and all carbon-intensive activities will have to pay it. But ACM can send a strong message about the importance of this issue—and get ahead of the coming changes—by acting now.

Precipitating change. What should ACM do with the funds collected from this surcharge? One obvious possibility is purchasing carbon offsets.9 A carbon offset is sold by a vendor, who uses the funds to finance an activity that permanently removes or avoids emitting some amount of greenhouse gases. The veracity and permanence of this activity is certified by a watchdog organization. (For example, planting trees is often considered not to be a certifiable activity, since it is difficult to guarantee they will not be cut down; reductions from installing methane capture devices on landfill sites or buying fuel-efficient stoves to replace open-fire cooking in poor communities are easier to predict.) Many organizations, including companies such as Google, Dell, Microsoft, General Motors, Delta Airlines, Lyft, and Expedia, as well as universities, academic societies, and even energy companies such as Exxon, now use carbon offsets to reduce their net footprint. ACM conferences should consider doing the same, and the purchases should be included in the public accounting we are proposing (see ACM's Carbon Offset Program http://bit.ly/2suhQUg).

Beyond buying offsets, one can imagine many good uses for the funds generated from a carbon surcharge: defraying the costs of virtualizing conferences (livestreaming, and so forth), and supporting "green" computing research.1 As an example of the last, ACM could help fund a cross-cutting research initiative specifically aimed at understanding how to best replace or approximate the socializing and networking aspects of conferences in a virtual setting.

At some point, governments will impose carbon pricing uniformly, but ACM can send a strong message about the importance of this issue by acting now.

Ultimately, however, carbon offsets and other "good works" cannot substitute for real reductions in emissions:2,3 they are, at best, a short-term expedient that buys time to agree on more difficult cuts. Indeed, the main goal of carbon pricing should be to stimulate creative rethinking of the conference model itself—for example, seriously considering alternatives such as rapid-turnaround journal-only publishing models, yearly megaconferences, and entirely virtual conferences.4 A potential sticking point is that some of these will significantly reduce conference revenues, in turn impacting the income stream of ACM itself; this could make emissions reduction politically problematic unless ACM's conference-focused business model is also adjusted.

What should the price be? Another key issue in implementing this second proposal will be how to set a price that reflects the true social cost of carbon, without unduly harming the scientific community. Initial data gathering will play a role, and a steady and predictable annual increase is a necessary component, but setting both the initial price and the slope of the ramp will likely be difficult political decisions. One measurable target, in line with the latest evidence from climate science, would be to tune the parameters with a goal of halving actual emissions every decade from now on, following a recently proposed "Carbon Law"12

The climate crisis is too urgent to leave to world leaders to address at their own pace: Organizations at every scale, including ACM, must confront their own contributions, raise awareness and foster discussion among their membership,1 and establish new ways of doing business in the lower-carbon future that is now upon us. We in ACM should do our part by mandating public accounting of conference carbon footprints and by putting a concrete price on the carbon we use.

10. Masson-Delmotte, V. et al., Eds. Global warming of 1:5_C: An IPCC Special Report on the impacts of global warming of 1:5_C above pre-industrial levels and related global greenhouse gas emission pathways, in the context of strengthening the global response to the threat of climate change, sustainable development, and efforts to eradicate poverty. 2018.

Benjamin C. Pierce (bcpierce@cis.upenn.edu) is a Professor of Computer and Information Science at the University of Pennsylvania, in Philadelphia, PA, USA.

Michael Hicks (mwh@cs.umd.edu) is a Professor of Computer Science at the University of Maryland, College Park, MD, USA.

Crista Lopes (lopes@uci.edu) is a Professor of Software Engineering at the University California, Irvine, CA, USA.

Jens Palsberg (palsberg@cs.ucla.edu) is a Professor of Computer Science at the University of California, Los Angeles, CA, USA.

a. See http://bit.ly/2suhQUg for information pertaining to the ACM Carbon Offset Program, including a link to a carbon offset calculator.

Don't Be Dazzled by Claims of Artificial Intelligence

The Other von Neumann