A New Labor Market for People with 'Coolabilities'

Many people with disabilities have enhanced strengths, such as the special ability of blind people to interpret sounds and touch, or the outstanding knack of people on the autistism spectrum to observe detail. Not so well known is the potential of this large and untapped resource of excellence for the economy and society. We call these enhanced strengths "coolabilities."

Powerful technologies are today ready to open the door to a new paradigm of work: instead of squeezing people into existing job slots, companies can tailor work that fits individuals' unique skills, talents, and passions, matching them with inspiring teams and offering them a choice of meaningful tasks. This has tremendous benefits for both the employee and employer by creating a "long-tail labor market" in which diversity brings competitive advantage.

People with coolabilities can spearhead the new market for tailored jobs because they are a particularly underutilized resource.

A "People-Centered Economy" (PCE) with Tailored Jobs for All

The authors are members of the Innovation for Jobs community (i4j),a co-founded in 2012 by David Nordfors and Vinton Cerf, co-inventor of the Internet. We champion the "People-Centered Economy" (PCE) as covered in our recent book.b Like the Copernican revolution, the PCE shifts the point of reference of our economy: centering it on the value of people and placing what is central todaytasks, services, productsin orbit. This changes the driving economic force from minimizing the cost of tasks to maximizing the value of people. It is a recipe for sustainability: tasks will come and go; people will remain. The purpose of things is to make people valuable, not the other way around.

The value in an economy, according to PCE, boils down to the value that its people see in each other. The economy is defined as people embedded in an ecosystem of organization that competes to make them valuable for each other. Seen this way, it is the purpose of organizations to serve people; never the other way around. Organizations will offer people two basic categories of services: the first category offers people better ways to earn their livelihoods, and the second offers them better ways to spend it.

Seen through the PCE lens, the conundrum of this day and age, whether AI will create or kill jobs, becomes crystal clear, it is simply the case of a balanced economy: "Is AI-innovation being applied more to earning or to spending?" The emphasis today is on "spending," that is, increasing demand for products and services, so the conclusion is that we need to support innovation that helps people earn. We need as much innovation for earning a living as we have for helping people spend what they earn.

Such innovation must be based on an "ecosystem for innovating jobs," which largely remains to be developed. As people gain power in the PCE, entrepreneurs seeking revenues look for demographics of undervalued people for whom they can innovate more valuable jobs. This is the emerging role that our i4j community serves today.

Coolabilities: An Untapped Resource of Excellence

Coolabilities are a centerpiece of the PCE. A labor market is emerging in which those with coolabilities are no longer viewed as disabled and therefore "unemployable," but are even more valuable on the labor market because of their powerful abilities. As pointed out by Burgstahler and Ladner,1 computing fields need more people with disabilities because their expertise and perspectives spark innovation. It is not just abilities (expertise), but it is also that they have a unique perspective adding to the diversity of a workforce.

Neuroscientists have identified enhanced abilities and compensatory mechanisms for a number of disabling conditions. Cross-modal plasticity is one example: a blind person's visual cortex is not useless; rather it adapts to help other senses such as hearing. Advances in technology such as the fMRI help us to gain deeper understanding of such processes. The concept of coolabilities connects these initiatives and opens a wider lens for understanding both scientific and social aspects of strengths linked to disabilities.

The nature of coolabilities is shown in the table. It shows six conditions, together with accompanying disabilities and typical coolabilities. Research into all imaginable conditions studying when, how, and why coolabilities occur is essential to provide a wider lens for understanding and utilizing human potential.

We suggest attributes of a coolability, which are not mutually exclusive:

It is important to understand that these suggested categories are not like slots, but rather provide coordinates for a multidimensional description of coolabilities. The hyper-systemizing coolability of many people on the autism spectrum is both singular and contextual, if it is understood as the disabling hypersensitivity to the environment, reframed by context. The repurposing of the brain that sharpens other senses when one sense is missing is singular, but also compensatory, because people use their heightened senses to compensate. Many deaf people will "listen" with their eyes and many blind people will "see" with their ears and hands. They have a singular talent, and they train it by making use of it.

Jobs for People with Coolabilities

The labor market has traditionally included at least a few jobs for people with coolabilities. In Thailand, for example, "blind massage" is appreciated because blind people's sensitive hands are known to have a better feel for muscles. Today the best-known coolabilities examples are of some people on the Autism spectrum, who often show exceptional talent for attention to detail and complex pattern recognition. These talents are currently appreciated by the software industry, where jobs have been created for individuals with coolabilities on the autism spectrum.

Until now, vocations for people with coolabilities have been limited, traditional, exotic, and piecemeal. In many countries of the world it is common to see people with certain disabilities placed, as stereotypes, into certain professions. But coolabilities do not limit the talent to any specific professions, rather point out to a general phenomenon, and a world of strength and talent that waits to be discovered. We are in the early days, yet worldwide coolabilities initiatives are beginning to coalesce and show synergies. The multidimensional description of coolabilities we suggest replaces labels and slots with a coordinate system spanning a limitless space of understanding, opportunity, and action. 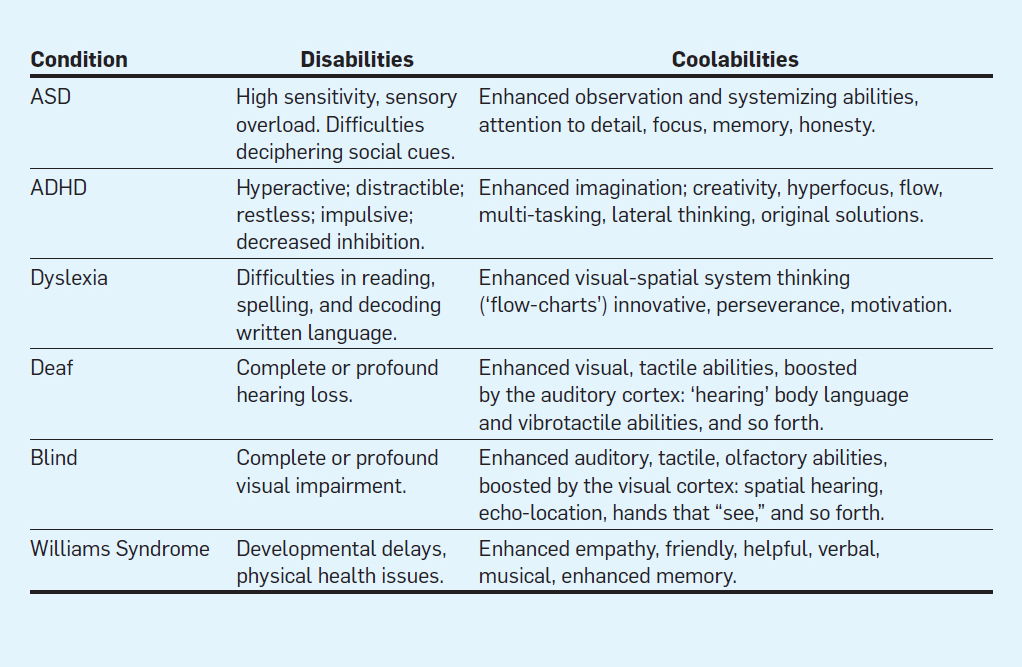 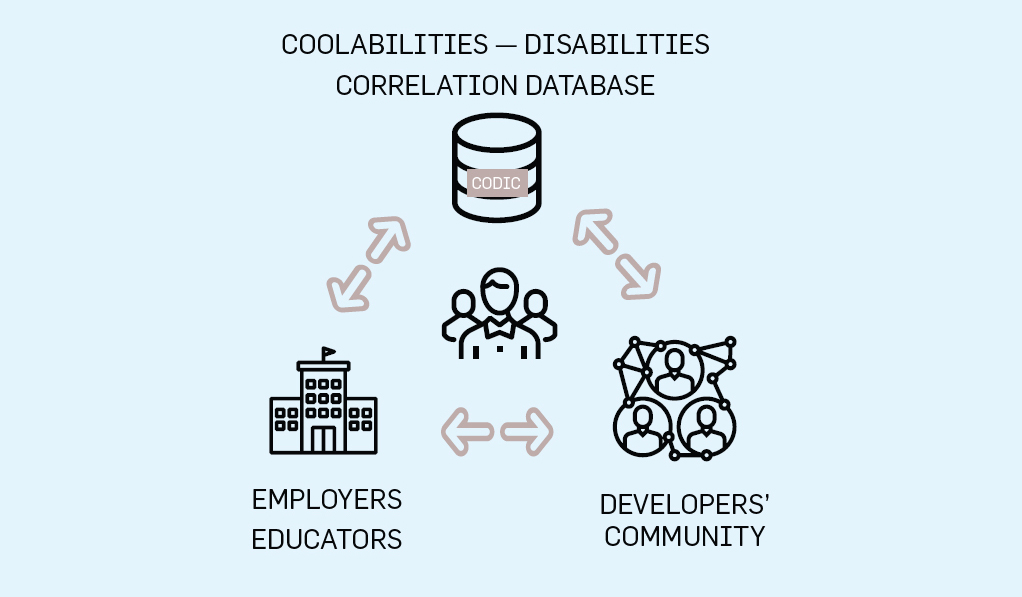 Coolabilities are currently being implemented at SAP Labs Latin America. Brazil legally requires that between 2% and 5% of every company's permanent workforce to be people with disabilities (PWD).c The government levies penalties against companies that do not comply. SAP Brazil has 1,950 permanent employees, and 97 are required to be PWD. To ensure compliance, the SAP Managing Director (MD) John Dennison has recently on-boarded 15 PWD as apprentices in a joint effort with the SENAC trade association. His office has conducted interviews designed to identify these employees' coolabilities. The next step will be to map coolabilities to open positions, ensuring the best fit. Says Dennison, "we don't want to just ensure compliance, we want every person to have a meaningful career at SAP."

Requirements like these are spreading worldwide: France regulates disabled hiring at 6%, Chile 1%, and Colombia provides benefits to companies hiring people with disabilities. Success in Brazil means the same can be replicated to other SAP locations with similar requirements.

But the strengths of people with disabilities must be proven beyond merely a regulatory compliance: their strengths need to be measured systematically to enhance the coolabilities database, which we describe next, and to ensure organizations make decisions effectively, providing the desired business outcomes at scale.

Companies like Specialisterne, founded by Thorkil Sonne (also founder of the "autism advantage" movement) have taken great steps in this direction.d However, employment of people with disabilities in the commercial market today is largely dependent on donations from foundations; it needs more commercial investment from growth-oriented investors. Hundreds of open positions at large companies wait to be occupied by people with coolabilities. It is an existing demand waiting to be satisfied. What remains is to bootstrap the market.

According to the 2011 World Report on Disability,3 one billion people, or 15% of the world population, experience some form of disability, making them the world's largest "minority"a demographic suffering an unemployment rate up to 80% in some countries. In the U.S., approximately 35% of working-age people with disabilities are working, less than half the number of people without disabilities. With nearly one-fifth of the U.S. population diagnosed with some form of disability (according to census), exploring ways to employ coolabilities has enormous potential for the U.S. alone.

Our i4j project "coolabilities.ai" has a plan for bootstrapping an ecosystem for innovating jobs for people with coolabilities and is designed to be applicable for all job specializations, not just those for the disabled. Our community includes engineers, experts, and enthusiasts who care about turning a perceived problem into an opportunity.

The key common resource of the "coolabilities.ai" platform is the "CODIC," the COolabilities-DIsabilities Correlation Database (see the figure). It supports an API2 that maps correlations between conditions and traitsboth weaknesses (disabilities) and strengths (coolabilities). It can be crowdsourced in a manner similar to Wikipedia and personalized job matching can be provided by a deep learning/decision intelligence system. Such a peer community will be required because the task will involve making judgments and developing policies. It can use a multitude of sources, from peer reviewed research papers to surveys and other narratives suggesting correlations.

CODIC enables developers to design applications. One example is a "coolabilities finder" where people can search for their enhanced strengths, helped by what they know about their conditions, strengths, history, needs, weaknesses, and more.

Imagine, for example, an entrepreneur with an interest in the potential of people with dyslexia. Affecting approximately one-tenth of the population, dyslexia creates a substantial drop-out risk for high-potential individuals. Many people with dyslexia have a number of strong abilities that are useful for design jobs, leadership roles, and other positions. Many do not have a college education, because such education generally requires strong reading and writing skills. This may be one reason why people with dyslexia often find themselves as independent entrepreneurs.

The entrepreneur can use the CODIC to research how many people are dyslexic, their correlating strengths and weaknesses, and to learn stories of successful dyslexia coolabilities advantages.

By targeting dyslexics using a "coolability finder," the developers' community can form an ecosystem for designing applications that link talent with opportunity. We already know of numerous positions for people with disabilities, such as the job openings at SAP for people from the ASD community. Members of coolabilities.ai can leverage this business opportunity by creating the solutions needed for their employment where corporations lack their own recruitment and training pipelines.

3. World Bank and WHO. World report on disability; https://bit.ly/2JMWwRQ.

b. See D. Nordfors and V.G. Cerf. The People Centered EconomyThe New Ecosystem for Work. 2018; See especially these chapters: "The unbeatable people-centered economy" by David Nordfors; "COOLABILITIESA New Language for Strengths in Disabling Conditions" by Chally Grundwag; "The birth of the inclusion ecosystem. Precision employment for people with disabilities, coolabilities and the rest of us." by V.R. Ferose, Lorien Pratt, Sudipto Dasgupta, and Ganapathy Subramanian; "The Autism Advantage Movement" by Thorkil Sonne.