We live in a time of accelerating changes. Our traditional methods of careful prediction, planning, and managing our work according to established schedules cannot keep up with the pace. More disruptions and even economic avalanches are on the way. How do we navigate in such conditions?

The idea that navigation is a good skill for this world is quite appealing. Ship's captains of old made their way to distant, unknown shores, moving across open waters beset with storms and unpredictable winds, responding to emergencies, and coping with diseases. They used instruments such as astrolabes and sextants to determine their positions and correct their courses. What skills do we need as navigators to maneuver in our professional world of unforeseen obstacles and unpredictable disruptions? What are our sextants?

Several authors have recently given us pictures of the world we must navigate. Thomas Friedman sees three big shaping forces: accelerating information technology (Moore's Law), global markets (trade facilitated by massive interconnectivity), and climate change (pollution, rising temperatures, more extreme storms, and so forth).2 These forces seem to have come out of nowhere in the past few years. The sudden changes are the effects of exponentially growing technologies.3

Kevin Kelly cites 12 deep forces behind technological change.5 Even if particular technologies facilitating them become obsolete, the forces will continue. For example, sharing is a persistent urge of people to share what they know. As the connectivity of networks grows, there are more people to share with. It is inevitable that future information technologies will be even better at promoting sharing.

Tony Seba examines the cost curves of several related energy technologies and concludes conditions are ripe for major economic disruptions in the next 515 years.7 For instance, the cost of a kilowatt-hour (kWh) of electricity from solar panels has been exponentially declining for a long time: within a few years, electricity from solar panels will be cheaper than from the grid. The cost advantage is amplified by the exponentially decaying cost of batteries, which enable storage of excess solar electricity for later use during the night or daytime peak hours. Meanwhile, the cost of producing an electric car has been dropping, facilitated by improving battery technology and by significantly fewer moving parts than cars with internal combustion engines. Seba believes the switch to solar panels and electric cars will precipitate a massive shift away from oil.

In 1992, Andy Grove, Chairman of Intel Corporation, wrote about technology inflection points.4 These are moments when a new technology emerges that is at least 10x (10 times) better than the current technology at doing its job. Grove thought those inflection points signaled impending economic avalanches. His response was to start research projects that would enable Intel to become good at the new technology and be competitive when the new markets arrived.

The common feature of the world described by these authors is exponential change, simultaneously in multiple technologies. For specific technologies, we can find useful trend lines, such as the periodic doubling of transistors on a chip or halving of solar panel costs. But these trends lines must be used with care: even though we can confidently predict the next generation of chips will be twice as fast as the current generation, we cannot predict the extent of adoption of the new chips or what people will do with them. Adoption depends on people choosing to embrace a technology; their choices are unpredictable effects of social context, norms, business practices, and receptivity. Consequently, John Seely Brown and Paul Duguid warn against using technology trend lines as means to forecast adoption.8 More often than not, people start to see the impending disruptions and take steps to avoid them.

How do we navigate technology change when we cannot predict how people will use technology?

Underlying It All: Exponential Growth

Let n(t) represent an adoption function: the number of units of technology adopted by time t. Moore's Law uses t to index chip generations and says the number of transistors doubles with each generation: n(t)=2n(t-1). Exponential increase means that n(t)=eat, where a is the growth rate.

How do we navigate technology change when we cannot predict how people will use technology?

We are very poor at appreciating what exponential growth means. Consider this old riddle: Every day the rapidly growing lily pads of a pond cover twice the surface area as the day before, completely covering the pond on Day 30. On what day was the pond half covered? The answer is, of course, Day 29. It seems to take a long time to get halfway, then suddenly you are all the way.

How can you plan for investments, careers, and future markets if some exponential change has been going on and you do not notice it until Day 29, when it is too late? To help us cope we try various methods of prediction. If only we could see something coming on Day 15 or 20, we would have time to do something about it.

Exponential growth is not a reliable extrapolator: at some point the resources to support the growth run out. For example, everyone in the community has adopted the technology; or transistors get too small to function properly. When we take saturation into account, adoption follows an S-curve: the graph of n(t) has an S-shape, exponentially growing to an inflection point, then slowing down and flattening at the saturation limit. The so-called Logistics equation was invented around 1845 as a mathematical model of the S-curve. In 1969, Frank Bass introduced a refinement that took into account the faster adoption rate of early adopters and gave a more accurate fit.1

All our modern technologies followed S-curves of adoption. Over the years, the time until adoption by 90% of the population has progressively shrunk. For example, radio (starting 1925) took 50 years to reach 90% adoption and World Wide Web (starting 1994) 20 years.

When a technology passes its inflection point, many businesses respond by jumping to another technology that is still in its initial growth stage. The result is that the adoption rate continues to be exponential, even though the details of the technology change. Moore's Law, for example, would not work without technology jumping. Ray Kurzweil argued that the doubling pattern of information technologies started in the 1920s, passed through four generationselectro-mechanical, relay, vacuum-tube, transistor, integrated circuitsand brought us to the fifth IT generation, silicon chips.6 Kurzweil predicts the IT industry will make new technology jumps in the near future. There are many candidates such as quantum computers, GPUs, and neural circuits. Seba notes a similar process with solar panels and batteries.

A more sophisticated approach uses an S-curve model, such as Bass model, fitted to the available adoption data. Once the model is fit to the data, it can predict the inflection point and saturation limit.

These approaches are based on the claim that an inflection or jump point signals an impending disruption. Because the models are only approximate, the exact timing of an inflection or jump point can vary considerably. Most of the technology forecasters who work with these models therefore hedge by giving a five-year to 20-year window in which the disruption is likely to happen, if it happens at all.

Even if the modeling error could be removed, the prediction of a disruption depends on many other factors that are not captured by the S-curve model. The most notable is that the adoptions counted by the adoption function all reflect human choices. Whether a given individual decides to adopt depends on a host of factors such as the opinions of friends, the assessment that the new technology is more valuable than the old, the economic condition of the adopter, the perceived cost of the transition, the mood of the times (for example, bull or bear markets), and an individual's own receptivity toward change. Professionals have to assess all these factors about their clients and markets before acting on the claim of a coming disruption.

Exponential growth is not a reliable extrapolator: at some point the resources to support the growth run out.

My recommendation for improving your skills at navigation in these exponentially changing environments has three parts. First, learn the vocabulary used in these discussions; the accompanying table summarizes. 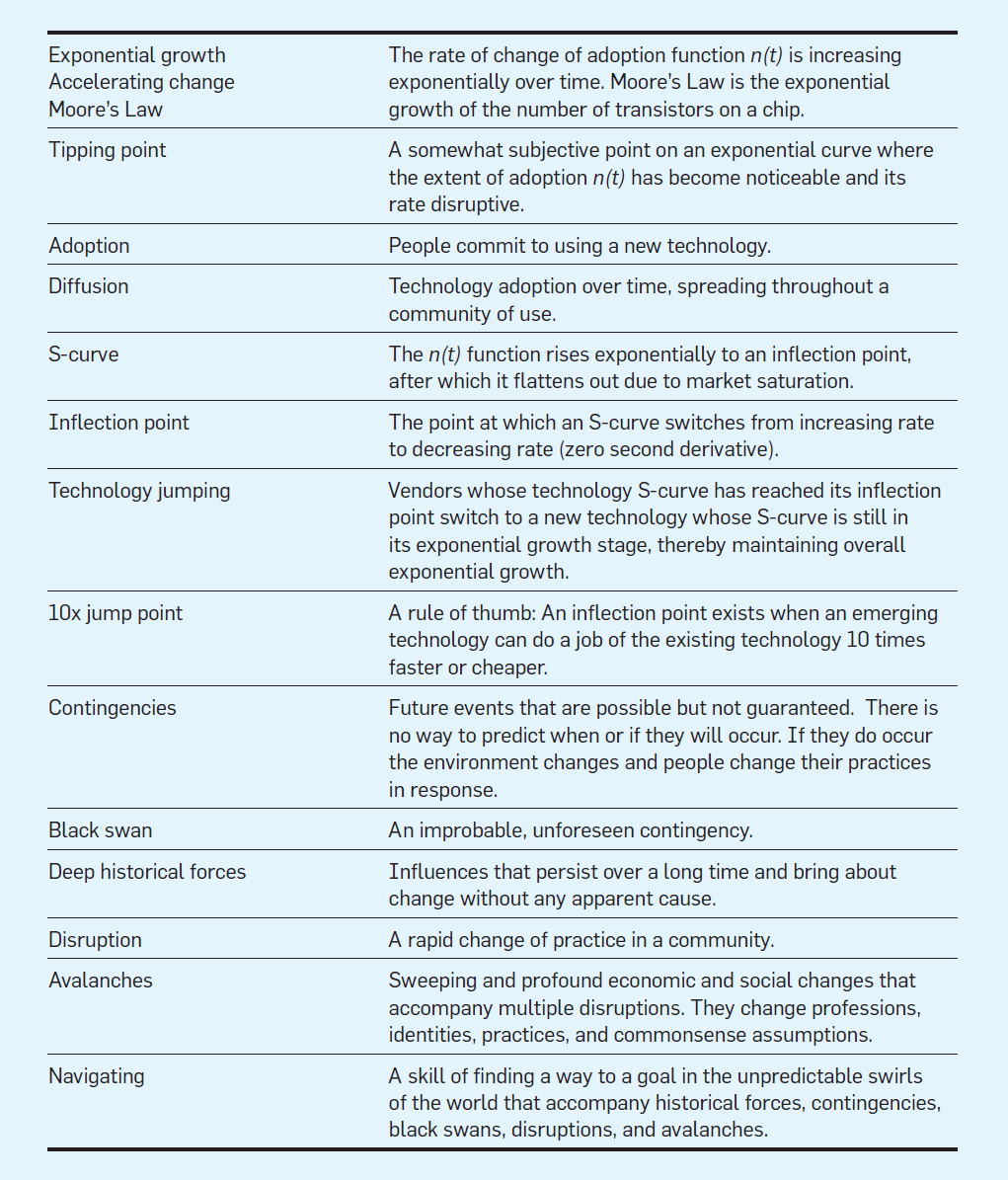 Second, learn to use the S-curve model, which you can fit to your data to estimate where the inflection and saturation points are likely to be. This model is your sextant.

Are the historical forces in the seas of change so strong that we are adrift and navigation makes no discernable difference? I think not. We are not rudderless. Navigation helps us steer the rudder. We join fellow navigators who, throughout the ages, have crossed the seas.

What Everyone Knows and What No One Knows