I was nervous when I took the stage. Despite assurances from everyone I had shown my speech, I was nervous because I was about to tell the 400 attendees at the 2017 ACM CHI conference's Diversity and Inclusivity Lunch that "diversity" and "inclusivity" are not enough.

There is a rapidly growing appreciation that diversity is a Problem That Must Be Solved in computing; as an example, despite women earning 57% of undergraduate degrees in the U.S., we earn only 18% of degrees in computer and information sciences (see https://bit.ly/1W7j2Re). But it is not just about women: academics facing multiple oppressionshomophobia, transphobia, ableism, racism, anti-Blackness, and intersections of all theseahave much to say about the often-entrenched views of the "old guard" and the institutions they control. During my time at CHI 2017, I found this firsthand. But what I also found inspired me: young academics (mostly graduate students, many of them queer) are turning a critical eye to established research practices and transforming computing research. 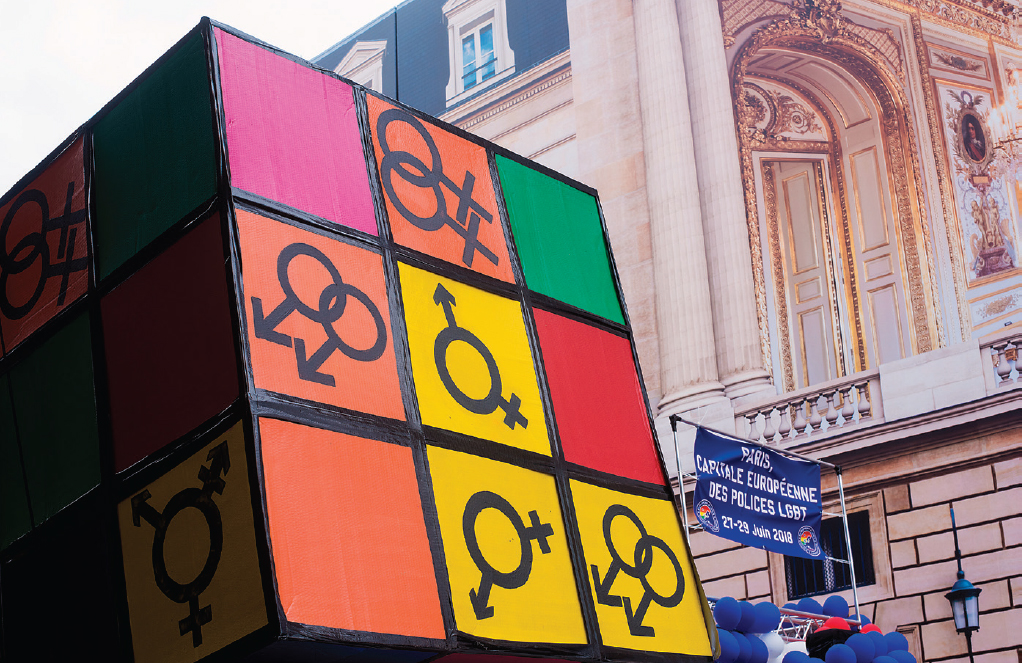 Figure. Gender-identity and sexual-orientation symbols on a Rubik's-cube-themed display in Paris, France, 2017.

Essential to this transformation is the understanding that powerful institutionsacademia among themoften embrace "diversity and inclusion" but stop short of structural change.7 Who gets to decide who is "the right kind of diverse"? What are people being included in? Who is doing the including, and for what reasons? The answers to these questions hinge upon the social, economic, and political power structures that form the fabric of our society. In my speech, I argued that tokenization and privilege pervade the self-indulgent initiatives that often mark "diversity work."2 I reflected on my experiences being tokenized: highlighted for my "diverse" personhood, and yet being unable to control my own narrative or to bring about meaningful, positive changes in my institutional environment. I wondered aloud whether I would be standing at that podium if I were raised in poverty, if I were a Black or indigenous person, or if I were disabled. Despite being both queer and a trans woman of color, my social position affords me privilege, safety, and a platform to speak. Critically, however, it does not matter how many "diverse" people are let into the room if we do not possess the power to change what happens inside it. Without that power, we can be ignored, silenced, or removed, and the status quo remains intact.

These issues impact not only the environments in which we do our work, but also the work itself. I have realized that asking certain research questionssuch as how to build technology for women, disabled people, or trans peoplerequires critical engagement with sociopolitical problems. In my field of human-computer interaction (HCI), we have recently seen the development of important frameworks and approaches to support this: feminist HCI, anti-oppressive design, and social justice-oriented design. These are much more than research tools; as a graduate student slowly developing my mind-set and conceptual framing, they were impactful. And in a computer science department whose faculty, students, and administration largely look nothing like me, they are indispensable.

CHI 2017 featured papers that applied and built upon these frameworks and introduced new ones: they analyzed the full corpus of the conference's proceedings with an intersectional feminist lens; explored technological interventions for sex workers; and promoted an equitable participatory relationship between disabled people and assistive technology researchers. I made a point of meeting several like-minded authors throughout the conference, and as we laughed, shared our struggles and successes, and talked trash about the old guard, I began to believe we could change the future together. Or, at the very least, I wanted it.

One of many avenues that beg further exploration in HCI involves transgender people. As a group, we are systematically oppressed at both the institutional and individual levels: we face disproportionate violence due to hate crimes and punitive policing practices; barriers in access to both primary and transition-related health-care (and significant health disparities more broadly), denials of coverage by insurance providers and lack of provider knowledge, discrimination in public accommodations, housing, and employment; the list goes on.3 And, of course, these injustices can be ameliorated or intensified by race, class, gender, and disability. Schlesinger's analysis indicated that only three papers in CHI's history dealt directly with the experiences of transgender people.6

Who gets to decide who is "the right kind of diverse"?

These papers, among others, tend to deal with the experiences and challenges of transgender users within existing technologies, such as Facebook and Tumblr. Such studies are critical in understanding how interactive systems fall short of providing trans people self-determination; they consistently find the assertion of identity, fear of reprisal and judgment, and the importance of collective belonging mark our interactions with technologies. From my own experiences, these findings extend to our daily lives, and the everyday struggles that arise from living in a society that oppresses us. It should come as no surprise, then, that most interactive systems we use today reflect and reinforce dominant and damaging cultural narratives. Technology designersand researchers more broadlytherefore inhabit a privileged position; whether we perpetuate or subvert oppressive social structures is our decision. My goal, which I share with the inspiring researchers I met at CHI 2017, is to subvert narratives that silence and suppress, that obstruct our self-determination, and that strip us of power. I am committed to using my privilege to collaboratively design technologies with and for trans people.

As an example: in my work designing trans health technology, I interviewed several trans people about their experiences. One woman said that the pressure to come out "perfect"as an embodiment of a stereotyped and objectified notion of womanhoodcompletely stopped her from transitioning and forced her to stay in the closet for decades, at the severe expense of her mental health. These narratives are reflected not just in media and culture, but also in the resources and health professionals that trans people frequently navigate throughout their lives. My dissertation work focuses on building a mobile application for voice training. Trans people may feel as though our voices do not represent us; this does not just hurt internally, but could also put us at risk for harassment or assault. When we present ourselves to the world (through our speech, dress, mannerisms, or otherwise), we might find ourselves walking a line between what we want to see in ourselves and what others expect of us. Another of my interview participants said she sometimes presents herself as more feminine than she feels in order to be gendered correctly by others. While a voice-training app could be useful, it could easily become prescriptive and propagate notions about how trans people should sound, act, and live. Without appreciating the complex personal and social contexts in which such technologies would be used, they will fail.

At CHI 2017, Ann Light presented her alt.chi submission (for which she won a Best Paper Award),4 which considered what HCI researchers should do in the face of existential crisis, a political and socioeconomic climate hostile to many, and the continuing decline of the environment and the associated uprising of the upper class. She was asked, "Are you hopeful?" To which she responded, "No, but I am determined to make change."

Her words inspired me to fight for change in my institutional environments and through my research, and I am excited to join a community of researchers who share that goal. As we pursue work that appreciates the multifaceted nature of human identity, the injustices of stigma and oppression, and the shared responsibility of technology designers, engineers, and academics to work toward true social good (the health of our people and our planet),5 we are making a statement. And with every author, advisor, and collaborator behind that work, we are building collective power. We are beginning to move beyond diversity and inclusionare you joining us?

Because this column was first written following CHI 2017, I want to add some thoughts on this year's conference, which wrapped up at the end of April. If you made a word cloud from the SIGCHI administrators' speeches during the conference, "diversity" would likely be in large type. During the opening remarks, it was stated CHI was intended to be "the most diverse conference ever." Ironically, the keynote speaker was Christian Rudder (the founder of OkCupid). In his keynote speech, Rudder presented a woman's profile picture and commented on her lack of personality and showed graphs that gauged the preferences of the "hottest guys" and the "hottest girls" (see Figure 1, a tweet by Rosie Bellini, a graduate student at Newcastle University). When asked about the behaviors of non-heterosexual users on the platform, he said "guys will be guys and girls will be girls." Rudder's response to an ethical question was particularly disconcerting to the audience of HCI researchers, many of whom have made careers out of studying the ethics of technology development (see Figure 2). 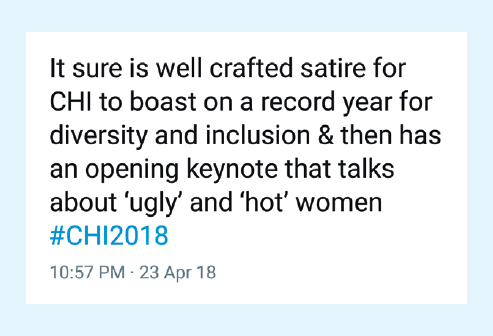 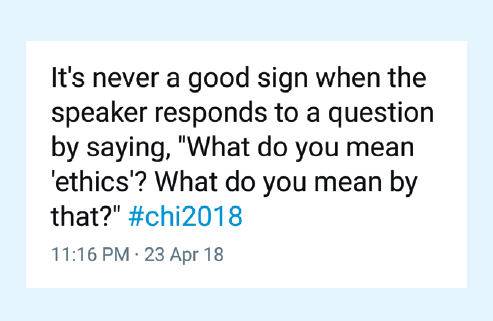 Many attendees felt wronged by the poor choice of keynote speaker, but more so by the fact that we had no say in the process. I learned that next year the speakers will be chosen by committee, but this situation is symptomatic of a larger and more complex issue: that the structure of the ACM and SIGCHI are both very top-down. The average ACM member has little say in the day-to-day operations and policies of the organization, and conference speakers, venues, and other choices are not made democratically. As a result, we can point out various problemssuch as the fact that the vast majority of CHI 2018 attendees were from North America and Europe, and less than 20 from Africabut we have no concrete means to enact change under the current system. As I have written elsewhere,1 this also leads to researchers facing strict content limitations when attempting to publish on "taboo" or "offensive" topics. When our work is altered or censored for this reason, we have no recourse.

We cannot talk about diversity without talking about politics. After Rudder's keynote, concerned members of the CHI community organized together to write an open letter and deliver a speech to the SIGCHI town hall meeting. Raising our collective voice is important and allows us to demand that large, powerful institutions work for all of us.

We still need to ask and answer crucial questions about what it means to politically organize at an annual conference, and in the context of a global academic research institution. Academics, especially graduate students forming unions at high rates, are finding our political voice. And now is the time for us to use it.

Alex Ahmed (ahmed.al@husky.neu.edu) is a fourth-year doctoral student in Personal Health Informatics at Northeastern University, Boston, MA, USA. Her dissertation research focuses on the community-based design and development of technology for transgender health. She is an organizer with Graduate Employees of Northeastern University-United Auto Workers (GENU-UAW).

a. Throughout this column I will refer to LGBTQ people (lesbian, gay, bisexual, transgender, queer). Transgender people are individuals whose gender does not match the one they were assigned at birth. I will also use first-person plural pronouns (we, our) variably to refer to these groups and identities I occupy. Finally, as a U.S.-based graduate student, this column features only my own limited perspective.

From Satellite to Smartphone, App Warns Public of Unsafe Water

Pentagon Wants AI to Predict Events Before They Occur