Will the Supreme Court Nix Reviews of Bad Patents?

"Bad" patents have been a plague to many in the software industry. Patents can be "bad" for numerous reasons. Although patents are supposed to be available only for new and inventive advances, sometimes it is difficult for examiners to locate the most relevant prior art. Not knowing about this art may cause them to approve patents that should not have been issued. Sometimes claims are too abstract or vague to be eligible for patents, or are deficient in other ways.

To address the bad patent problem, most developed countries have created administrative procedures so that third parties can challenge the validity of patents by asking a patent office tribunal to re-examine the patents. Post-grant review procedures are cost-effective ways to get rid of bad patents without having to go through full-dress, multiyear, very expensive litigation and appellate review. Patents that survive post-grant reviews are "stronger" for having gone through this extra scrutiny.

In 2011, the U.S. Congress enacted the America Invents Act (AIA), which, among other things, gave the Patent Trial & Appeal Board (PTAB) the power to review issued patents and extinguish claims that the board deems deficient for lack of novelty or inventiveness. Those dissatisfied with PTAB rulings can ask the Court of Appeals for the Federal Circuit (CAFC) to review them. 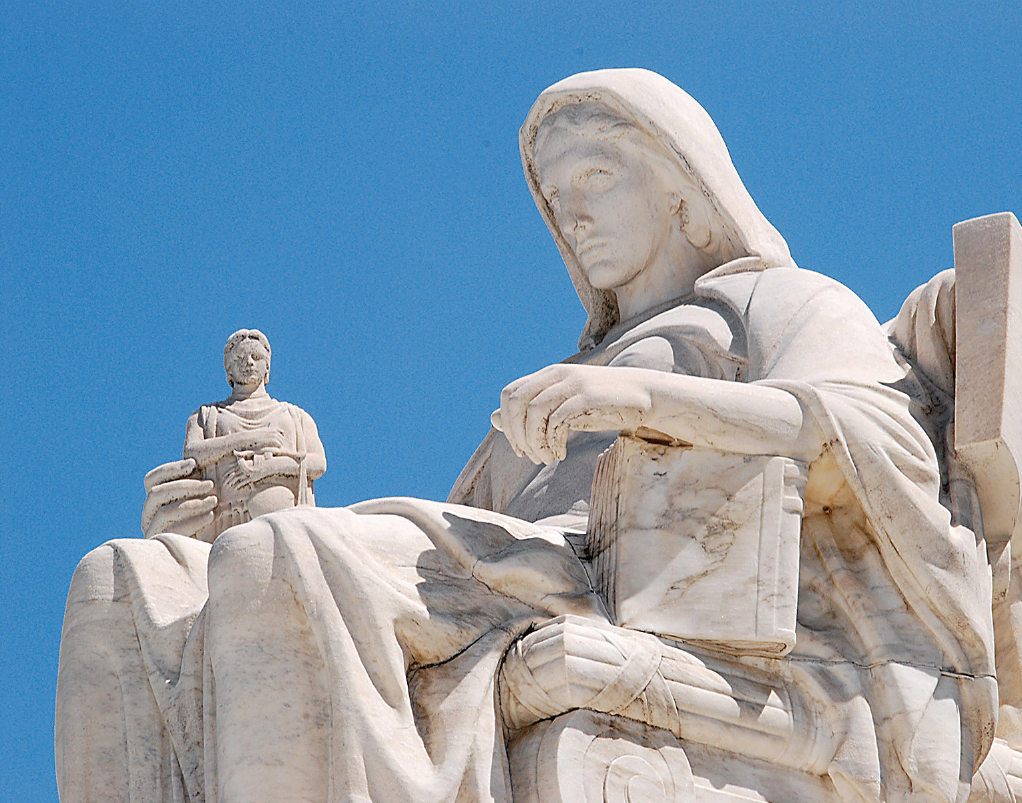 Figure. The statue The Contemplation of Justice, created by the sculptor James Earle Fraser, flanks the U.S. Supreme Court building in Washington, D.C.

Greene's Energy Group was among the firms that asked PTAB to review a patent being asserted against it. Oil States Energy Services had sued it in federal court for infringement of this patent. PTAB agreed with Greene's that the Oil States patent was invalid on lack of novelty grounds. Oil States appealed this decision to the CAFC, in part by attacking the constitutionality of the PTAB review process.

The CAFC thought so little of Oil States' appeal that it did not even issue an opinion to explain its denial. But Oil States was not ready to give up. It asked the U.S. Supreme Court to review the constitutional question.

To everyone's astonishment, the Court decided in June 2017 to hear Oil States' appeal. All of a sudden, the very useful PTAB tool that Congress created to enable challenges to "bad" patents was at risk of being struck down on hoary old constitutional grounds.

Oil States is obviously upset at the invalidation of its patent on a device and method to cap well-heads during hydraulic fracturing (aka fracking) procedures so the well-heads can withstand considerable pressure caused when firms pump fluids into oil and gas wells to stimulate or increase the production.

The Oil States lawsuit against Greene's for infringing this patent was stayed during the PTAB review. Unless the Supreme Court invalidates the whole PTAB review procedure on constitutional grounds, Oil States will lose this lawsuit.

The stakes are, of course, much larger than the loss that Oil States would sustain if the Supreme Court rules against it. In its petition asking the Court to hear its appeal, Oil States emphasized that PTAB had overturned nearly 80% of the patent claims it had reviewed. (This affected almost 10,000 patents as of March 2016.) That may sound like a lot, but consider the PTAB only reviews patents when it has decided the challenges are likely to succeed.) The Oil States brief cited one source estimating that PTAB reviews had "destroyed" $546 billion in value to the U.S. economy and "wiped out" $1 trillion in valuation of companies whose patents had been invalidated.

If PTAB was right that these patents should not have issued, one might think it is good that companies sued for infringement did not have to pay $546 billion to license invalid patents. The $1 trillion in lower valuation for firms whose patents were struck down may also be well deserved. That, however, is not directly relevant to the constitutional issue the Court will be grappling with in the Oil States case.

Explaining the legal issue before the Supreme Court in Oil States requires a brief review of key parts of the U.S. Constitution. Article I confers numerous legislative powers on the U.S. Congress, including the power to pass laws that grant exclusive rights for limited times to inventors for their discoveries in the useful arts (that is, patents).

Article II establishes the Executive Branch of the U.S. government and sets forth powers of the President and those who work within that branch of the government.

Article III establishes and gives certain powers to federal courts. Section 1 states: "The judicial Power of the United States, shall be vested in one supreme Court, and in such inferior Courts as the Congress may from time to time ordain and establish." Section 2 provides in relevant part that "[t]he judicial Power shall extend to all Cases, in Law and Equity, arising under this Constitution, the Laws of the United States, and Treaties made, or which shall be made, under their Authority."

Also at issue in Oil States is the Seventh Amendment to the Constitution, one of the 10 amendments to the Constitution (widely known as the Bill of Rights), which were promulgated during the process of state ratification of the Constitution to address several civil liberties concerns raised in debates about the original document.

The Seventh Amendment provides: "In Suits at common law, where the value in controversy shall exceed twenty dollars, the right of trial by jury shall be preserved, and no fact tried by a jury, shall be otherwise re-examined in any Court of the United States, than according to the rules of the common law."

Oil States' argument, boiled down to its essence, is this: Congress created the PTAB as an administrative tribunal within of the U.S. Patent and Trademark Office (PTO). Congress gave PTAB the power to adjudicate certain challenges to the validity of issued patent claims. Under its theory, Oil States contends that only Article III courts have the constitutional authority to adjudicate patent validity. It further claims that under the Seventh Amendment, it has the right to a jury trial on its patent claims.

Oil States relies on an 1898 Supreme Court opinion, McCormick Harvesting Machine Co. v. C. Aultman & Co., which says, among other things, that a patent "is not subject to being revoked or cancelled by the President, or any other officer of the government" because "it has become the property of the patentee, and as such is entitled to the same legal protection as other property." Because courts had, prior to adoption of the Constitution, the power to review patent validity and infringement, the Constitution should be understood to have vested Article III courts, and only Article III courts, with the power to decide whether patents are valid.

Virtually everyone who pays attention to patent law was surprised by the Court's decision to review the CAFC's decision in Oil States.

Oil States is not the first firm to have raised this particular constitutional challenge. Three times previously the Supreme Court denied petitions to review the constitutionality of the PTAB power to extinguish patent claims. This explains why virtually everyone who pays attention to patent law was surprised by Court's decision to review the CAFC's decision in Oil States.

The Oil States case has many owners of weak patents hoping the Court will find merit in Oil States' arguments. Many of others are worried that the Court will get tangled up in abstract arguments about whether patents are "private" or "public" rights under the Court's complicated jurisprudence about powers of Article III courts and powers that Congress has to create administrative tribunals to handle certain kinds of claims.

Greene's had hoped to ward off Supreme Court review by relying on the Court's prior lack of interest in hearing this kind of challenge. On the merits, it relied upon a 1989 Supreme Court opinion, Gianfinaciera SA v. Nordberg, which opined that Congress has the power to decline to provide for jury trials to resolve certain types of disputes between private parties over statutory rights as long as the rights at issue are integral to a public regulatory scheme whose operations Congress has assigned to an administrative agency.

Greene's also cited precedents holding that patents are "public rights" and integrally related to the complex regulatory scheme that Congress assigned to the PTO. Because PTAB's reviews are part and parcel of that scheme, Greene's argued that Congress had power to assign these reviews to the expert agency in charge of this scheme, namely, the PTO.

The PTO also filed a brief in response to Oil States' petition, pointing out that Congress intended for the AIA to "establish a more efficient and streamlined patent system that will improve patent quality and limit unnecessary and counterproductive litigation" in response to a "growing sense that questionable patents are too easily obtained and are too difficult to challenge." The PTO brief argued that the Court should not thwart this laudable goal.

If the only way a bad patent can get killed is through a $5$10 million federal court lawsuit, lots of bad patents will go unchallenged.

It noted that Congress had given several agencies besides the PTO the power to review and correct errors in their past decisions. PTO examiners, like many other federal agents, sometimes make mistakes. The PTAB review process enables correction of those mistakes.

The PTO challenged Oil States' reading of the McCormick decision. The holding in that case was that the patent office could not cancel a patent because Congress had not given the office power to do so. By enacting the AIA, however, Congress conferred such power on the PTO. The sentences from McCormick on which Oil States relied were only "dicta."

Constitutional challenges to Congressional enactments are rarely successful. The Supreme Court generally gives a broad reading to the constitutional powers that Congress has to accomplish its goals, including the establishment of administrative tribunals. Even so, there is reason for PTAB-pro-ponents to be worried about the Oil States case. The Supreme Court's jurisprudence on the powers of Article III courts versus the powers of Congress to establish tribunals to resolve private disputes is very arcane, convoluted, and far from consistent.

The Court's job is to interpret the Constitution. So the Justices cannot just decide that Congress had a good reason to establish PTAB and give it power to extinguish erroneously granted patents. The Justices will have to carve a careful path through the thicket of their past decisions to articulate standards to uphold PTAB's patent reviews, and give guidance about Congress' powers to establish other administrative tribunals, such as a small claims tribunal within the Copyright Office.

One can hope the Justices will consider the constitutional issue in Oil States in light of another constitutional purpose, that which underlies the patent system: promoting the progress of useful arts. If the only way a bad patent can get killed is through a $5 million-$10 million federal court lawsuit, lots of bad patents will go unchallenged. PTAB is an efficient mechanism to extinguish erroneously issued patents. It will be unfortunate indeed if the Court feels so caught in the web of its constitutional precedents that it cannot find a way to uphold the good work the PTAB has been doing.

Pamela Samuelson (pam@law.berkeley.edu) is the Richard M. Sherman Distinguished Professor of Law and Information at the University of California, Berkeley, USA, and a member of the ACM Council.

The Rise and Fall (and Rise) of Datasets