What Can Agile Methods Bring to High-Integrity Software Development?

There is much interest in Agile engineering, especially for software development. Agile's proponents promote its flexibility, leanness, and ability to manage changing requirements, and deride the plan-driven or waterfall approach. Detractors criticize Agile's free-for-all.

We don't have all the answers, but we hope this Viewpoint continues to provoke debate on this important topic.

Why bother with Agile at all? We often encounter two myths regarding the "traditional" approach to high-integrity software development: that we somehow manage to perform a single-iteration waterfall style process, and that "formal" notations are not amenable to change. Neither myth rings true with our experience. As our projects develop, they must absorb change and respond to defects just like any other. This led to an observation: your project is going to become iterative whatever you do, so you might as well plan it that way from the beginning. This lesson was put to good effect in the MULTOS CA project,6 which initially planned for seven iterations, but delivered after 13, owing to a barrage of change requests. Nevertheless, it worked, and we were able to keep a substantial formal specification and all the other design documentation up to date as the project evolved. Knowing that "change" and "iteration" were at the heart of the Agile manifesto, we decided to see what we could learn and bring to future projects.

Many consider Agile as beginning with XP,1 but its roots are much older. Many of XP's core practices were well established long agotheir combination and rigorous practice was novel. A survey9 notes that both incremental and iterative styles of engineering were used in the 1950s. Redmill's work on evolutionary delivery12 predicted many of the problems faced by Agile projects. Boehm2 provides some useful insight, while the development of MULTOS CA6 compared Correctness-by-Construction with XP,3 showing that the two were not such strange bedfellows after all.

Lockheed Martin developed the Mission Computers for the C130J by combining semi-formal specification, strong static verification, iterative development, and a strongly Lean mind-set.11 Use of Agile has been reported by Thales Avionics,5 while SINTEF have reported success with SafeScrum.13 A recent and plain-speaking evaluation of Agile comes from Meyer,10 although he does not specifically deal with high-integrity issues.

How do Agile's practices and assumptions match real high-integrity projects? Here are some of the most obvious clashes. For each issue, we start with a brief recap of the practice in question, then go on to describe the issue or perceived clash, followed by our ideas and experiences in overcoming it. Where possible, we close each section with an example of our experience from the C130J, MULTOS, or iFACTS projects.

Agile calls for continuous integration, with a regression test suit, and a test-first development style, with each function associated with specific tests. Meyer calls these practices "brilliant" in his summary analysis,10 but Agile assumes that dynamic test is the principal (possibly only) verification activity, saying when refactoring is complete, or when the product is good enough to ship.

The safety-critical community hit the limits of testing long ago. Ultra-reliability cannot be claimed from "lots of testing." Security is even more difficultcorner-case vulnerabilities, such as HeartBleeddefy an arbitrarily large amount of testing and use. In high-integrity development, we use diverse forms of verification, including checklist-driven reviews, automated static verification, traceability analysis, and structural coverage analysis.

How do Agile's practices and assumptions match real high-integrity projects?

There is no barrier between these verification techniques and Agile, especially with an automated integration pipeline. We try to use verification techniques that complement, not repeat each other. If possible, we advocate for sound static analyses (tools that find all the bugs, not just some of them), since this gives greater assurance and reduces pre-test defect density. With careful consideration of the assumptions that underpin the static,8 we can reduce or entirely remove later testing activities.

The NATS iFACTS system4 augments the software tools available to air-traffic controllers in the U.K. It supplies electronic flight-strip management, trajectory prediction, and medium-term conflict detection for the U.K.'s en-route airspace, giving controllers substantially improved ability to plan ahead and predict potential loss-of-separation in a sector. The developers precede commit, build, and testing activities with static analysis using the SPARK toolset. Overnight, the integration server rebuilds an entire proof of the software, populating a persistent cache, accessible to all developers the next morning. Working on an isolated change, the developers can reproduce the proof of the entire system in about 15 minutes on their desktop machines, or in a matter of seconds for a change to a single module. While Agile projects might have a "don't break the tests" mantra, on iFACTS it's "don't break the proof (or the tests) ... "

Our principal weapon in meeting non-functional requirements is system (not just software) architecture, including redundancy and separation of critical from non-critical. Such things can be prohibitively expensive to refactor late in the day. We need just enough upfront architecture work to argue satisfaction of key properties. We also do a "What If?" exercise to ensure the proposed architecture can accommodate foreseeable changes.

The MULTOS CA project had some extraordinary security requirements, which were met by a carefully considered combination of physical, operational, and computer-based mechanisms. The software design was much simplified as a result of this whole system view. The physical measures included the provision of a bank vault and enclosing Faraday cagehardly items that we could have ignored and then "refactored in" later.

User Stories and Non-Functional Requirements. For security and safety, we must ensure our specification covers all possible inputs and states. Agile uses stories to document requirements, but these sample behavior, with no completeness guarantee. The gaps between stories may contain vulnerabilities, bugs, unexpected termination, and undefined behavior. Meyer files user stories under "Bad and Ugly," and we agree.

For critical systems, we prefer a (semi-)formal specification that offers some hope of completeness. The C130J used Parnas tables to specify critical functions. They seemed to work wellthey were simple enough to be understood by system engineers, yet sufficiently formal to be implemented and analyzed for correctness.

Sprint Pipeline. Agile usually requires a single active "Sprint," delivered immediately to the customer, so only two builds are ever of interest:

This assumes the customer is always able to accept delivery of the product and use it immediately. This is not realistic for high-integrity projects. Some customers have their own acceptance process, and regulators may have to assess the system before deployment. These processes can be orders-of-magnitude slower than a typical Agile tempo. 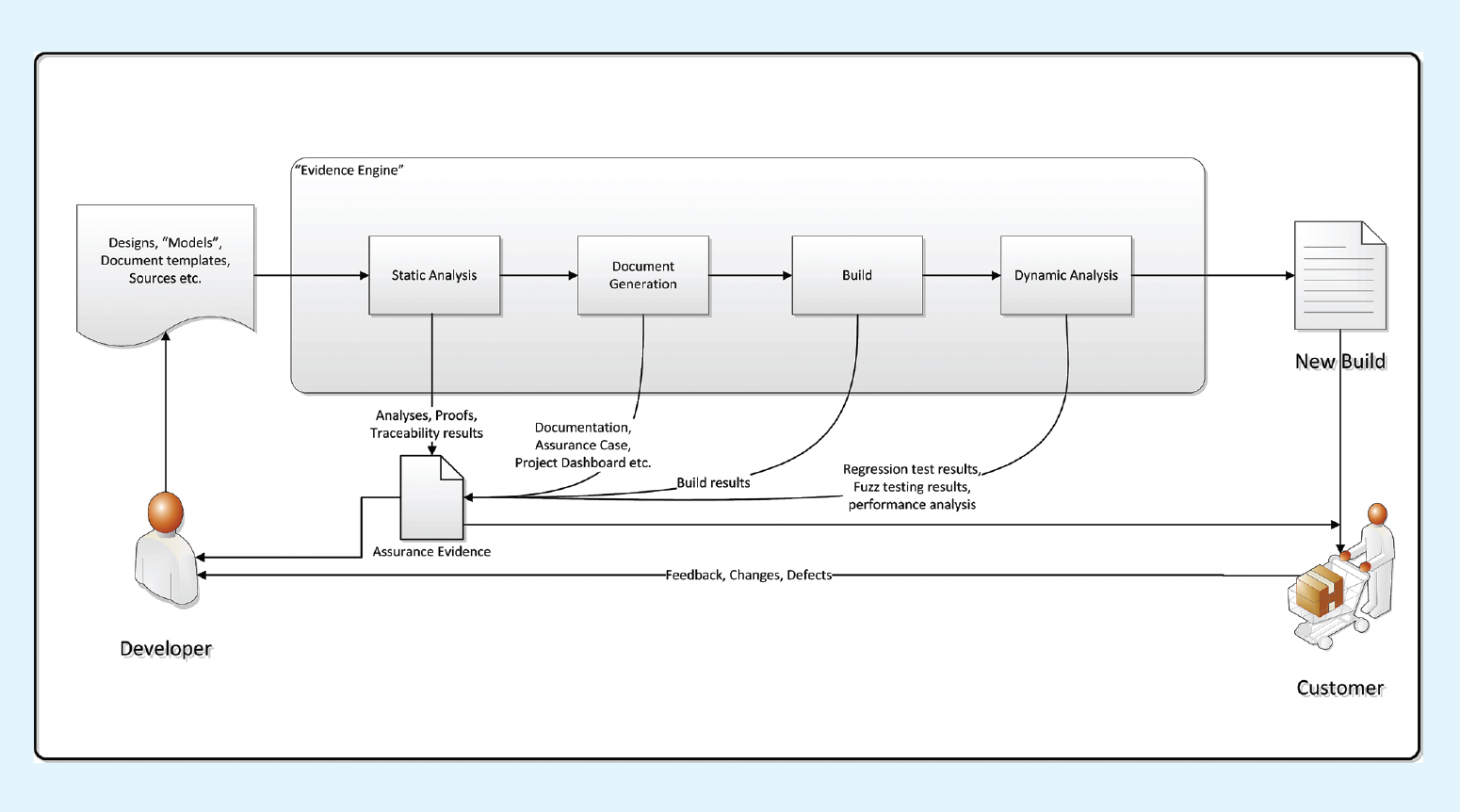 iFACTS uses a deeper pipeline and multiple iteration rates, with at least four builds in the pipeline:

All four pipeline stages run concurrently with multiple internal iteration rates and delivery standards. The development team can deliver to our test team several times a day. A rapid build can be delivered to the customer (in, say, 24 hours), but comes with limitations on its assurance package and allowed use: it is not intended for operational use, but for feedback from the customer on a new feature. A full build (perhaps once every six months) has a complete assurance package, including a safety case, and is designed for eventual operation. The trick is to make the iteration rates harmonic, both with each other and with the customer and regulator's ability to accept and deploy releases.

Embedded Systems Issues. Agile presumes plentiful availability of fast testing resources to drive the development pipeline. For embedded systems, if the hardware exists, there may be just one or two target rigs that are slow, hostile to automation, and difficult to access. We have seen projects revert to 24-hour-a-day shift-working to allow access to the target hardware.

In mitigation, we reduce on-target testing with more static verification. Secondly, if we know that code is completely unambiguous, then we can justify testing on host development machines and reduce the need to repeat the test runs on target. Hardware simulation can give each developer a desktop virtual target or a fast cloud for the deployment pipeline. While virtualization of popular microprocessors is common, high-fidelity simulation of a target's operating environment remains a significant challenge.

On one embedded project, all development of code, static analysis, and testing is done on developers' host machines, which are plentiful, fast, and offer a friendly environment. A final re-run of the test cases is performed on the target hardware with the expectation of pass-first-time, and allowing the collection of structural coverage data at the object-code level.

High-integrity practices can complement Agile. We previously mentioned the use of static verification tools. While we have a preference for developer-led, sound analysis, we recognize that some projects might find more benefit in unsound, but easier to adopt, technologies, such as bounded model checking. Computing power is readily available to make these analyses tractable at an Agile tempo.

A second opportunity comes with the realization that, if we can automate analysis, building and testing of code, why not automate the production of other artifacts, such as synthesis of code from formal models, traceability analysis, and all the other documentation that might be required by a particular customer, regulator, or standard? An example of such an "Evidence Engine" is shown in the accompanying figure.

A crucial issue: How can we adopt an Agile approach, and still estimate, bid, win, and deliver projects at a reasonable profit? Our customers' default approach is often to require a competitive bid at a fixed price, but how can this be possible in an Agile fashion if we are brave enough to admit that we don't know everything at the start of a project? In most of our projects, the users, procurers, and regulators are distinct groups, all of whom may have wildly different views of what "Agile" means anyway.

How can we adopt an Agile approach, and still estimate, bid, win, and deliver projects at a reasonable profit?

We have had good experience with a two-phase approach to contracting, akin to the "architect/builder" model for building a house. Phase 1 consists of the "Upfront" workrequirements, architectural design, and construction of a skeletal satisfaction argument. The "just enough" termination criteria for phase 1 are:

Phase 2 (possibly a competitive bid) could be planned as an iterative development, using the ideas set out here. The MULTOS CA was delivered in this fashion, with phase 1 on a time-and-materials basis, and phase 2 on a capped-price risk-sharing contract.

We have used the ideas described in this Viewpoint at Altran, but we have yet to deploy all of them at once. An idealized Agile development process would use:

Returning to the questions posed at the beginning of this Viewpoint, we could summarize our findings as follows:

We are deploying these ideas on further projects, and look forward to being able to report the results. We hope others will do the same.

2. Boehm, B. and Turner, R. Balancing Agility and Discipline: A Guide for the Perplexed. Addison Wesley, 2003.

Roderick Chapman (rod@proteancode.com) is an independent consultant software engineer, and an honorary visiting professor at the University of York, U.K.

Jim Woodcock (jim.woodcock@york.ac.uk) is Professor of Software Engineering in the Department of Computer Science at the University of York, U.K.

Thanks to Felix Redmill, Jon Davies, Mike Parsons, Harold Thimbleby, and Communications' reviewers for their comments on earlier versions of this Viewpoint.