The X PRIZE Foundation, an educational nonprofit prize organization, and Progressive Insurance, the United States' fourth largest auto insurance group, awarded $10 million on Thursday (September 16) to three teams who successfully completed the rigorous Progressive Insurance Automotive X PRIZE. The winning teams—Edison2 of Lynchburg, VA; X-Tracer of Winterthur, Switzerland; and Li-ion Motors Corp. of Mooresville, NC—emerged from an original field of 111 competing teams, representing 136 vehicle entries from around the world. The winning vehicles were showcased to an audience of auto industry, business and government leaders. Each of the winning teams was also presented with a towering bronze trophy designed by Harry Winston Inc. 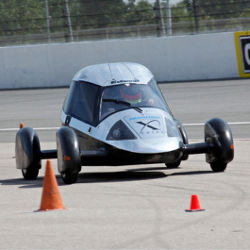 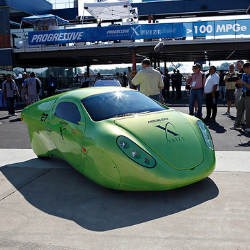 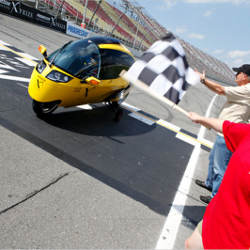 While the prize has now been awarded, the journey continues for the winning teams. They will immediately begin leveraging their winning status, prize money and connections made over the course of the competition to catapult their vehicle into the consumer market. Under a U.S. Department of Energy-funded technical assistance program, qualified Progressive Insurance Automotive X PRIZE competitors will also gain funding support for access to key automotive expertise and test facilities. The aim of the program is to assist teams in readying their vehicles and technologies for introduction to the market.

"We've seen a shift in the market since we first launched this competition, and a greater awareness by people everywhere to think more seriously about the actions we take, and how they affect our environment," said the X PRIZE Foundation's Diamandis. "Gas mileage ranks as one of our top concerns when purchasing a new vehicle and I believe strongly that the innovations showcased throughout the life of this competition will continue to impact and improve our car buying options for the future."

The highlights and drama of the Progressive Automotive X PRIZE will be featured in a one-hour documentary entitled, "X PRIZE Cars: Accelerating The Future" debuting Thursday (September 16) at 9pm EDT/6pm PDT on the National Geographic Channel.

We Need Remote Work for Everyone