Rescue robots could be more useful in snowy conditions thanks to an adjustable wheel that has been developed by researchers in Japan. A team led by Taro Iwamoto of Ryukoku University has mounted six pivoting vanes on the side of a wheel, and their angle can be adjusted for the best possible traction by changing the position of the central hub.

On ice, adjusting the vanes so that those underneath hook into the surface would pull the robot forward. In soft snow, the robot would be able to compact the snow by adjusting the vanes to lie flat, or use them as paddles to move the wheel. The vanes also can be adjusted to allow the robot to dig through a wall of snow and clear a path. The hub controls are in the wheel disc. 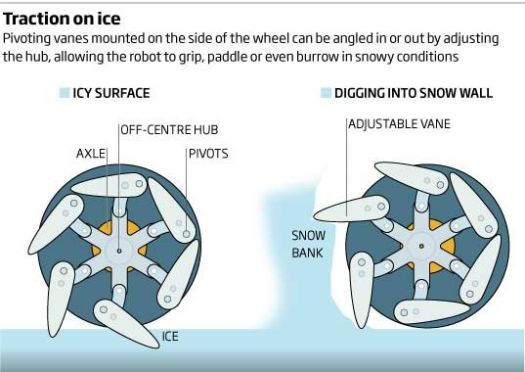 Iwamoto plans to improve the maximum speed of 20 centimeters a second for the current prototype by designing a four-wheel-drive version. "We plan to test it this winter," Iwamoto says.

AI Is Ushering In a New Scientific Revolution

A Challenge of Membership